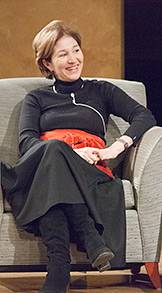 The foundation announced the appointment April 3. Slaughter will start her new position on Sept. 1 and transfer to emerita status at the University.

"The New America Foundation has made an inspired choice for its next president and I am delighted to congratulate Anne-Marie Slaughter on her appointment," said Princeton University President Shirley M. Tilghman. "This is an excellent opportunity for her, and it will allow her to continue to provide national and global leadership on a broad range of important issues. She leaves an indelible mark on Princeton where, as dean of the Woodrow Wilson School, she significantly strengthened the study and teaching of public policy in a myriad of ways, and where as both dean and faculty member she has had a lasting impact on the many students she inspired to pursue public service. We wish her every success."

"I have loved my decade first as dean and then as professor here," Slaughter wrote in a message to the Wilson School community. "It is hard to leave such extraordinary students, who teach me as much as I teach them and keep me young; so many wonderful staff members, without whom the School simply could not run; and a faculty second to none in melding brilliant disciplinary work with a deep commitment to addressing important public policy problems. But it is time for me to move one step closer to putting ideas into action."

Slaughter was dean of the Wilson School from 2002 to 2009. From 2009 to 2011, she served as director of policy planning for the U.S. Department of State, becoming the first woman to hold that position.

As the author of the July/August 2012 cover story for The Atlantic, "Why Women Still Can't Have It All," Slaughter has also advanced a national conversation about the struggles women face when balancing careers and family.

She is currently a member of the board of the New America Foundation, a nonprofit, nonpartisan public policy institute that invests in new thinkers and new ideas to address the next generation of challenges facing the United States.

Slaughter, a 1980 Princeton alumna who majored in the Wilson School, is credited with rebuilding the international relations faculty during her time as dean. She also increased the size of the faculty — strengthening traditional research capacity and teaching expertise in public and international affairs while expanding to other disciplines relevant to public policy, including history and the sciences.

Slaughter oversaw the creation of new research centers and programs while serving as dean, including the Niehaus Center for Globalization and Governance; the Princeton-Harvard China and the World Program; the Policy Research Institute for the Region; and Institutions for Fragile States.

Slaughter has written or edited six books, including "A New World Order" (2004) and "The Idea That Is America: Keeping Faith With Our Values in a Dangerous World" (2007), and more than 100 scholarly articles.

She received her M.Phil. and D.Phil. degrees in international relations from the University of Oxford in 1982 and 1992, respectively, and her law degree from Harvard Law School in 1985.