Using 3-D printing tools, scientists at Princeton University have created a functional ear that can "hear" radio frequencies far beyond the range of normal human capability.

The researchers' primary purpose was to explore an efficient and versatile method of merging electronics with tissue. The scientists used 3-D printing of cells and nanoparticles — with an off-the-shelf printer purchased off the Internet — followed by cell culture to combine a small coil antenna with cartilage, creating what they term a bionic ear. 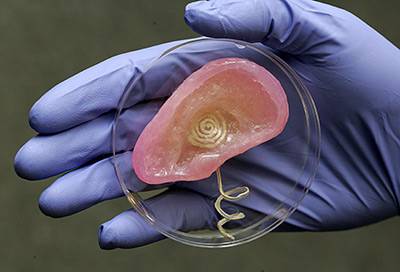 Princeton scientists used 3-D printing to create a "bionic ear" made up of a coil antenna and cartilage, demonstrating an efficient method of merging electronics with tissue. (Photo by Frank Wojciechowski)

"In general, there are mechanical and thermal challenges with interfacing electronic materials with biological materials," said Michael McAlpine, an assistant professor of mechanical and aerospace engineering at Princeton and the project's lead researcher. "Previously, researchers have suggested some strategies to tailor the electronics so that this merger is less awkward. That typically happens between a 2-D sheet of electronics and a surface of the tissue. However, our work suggests a new approach — to build and grow the biology up with the electronics synergistically and in a 3-D interwoven format."

McAlpine's team has made several advances in recent years involving the use of small-scale medical sensors and antennas. Last year, a research effort led by McAlpine, Naveen Verma, an assistant professor of electrical engineering, and Fiorenza Omenetto of Tufts University resulted in the development of a "tattoo" made up of a biological sensor and antenna that can be affixed to the surface of a tooth.

This project, however, is the team's first effort to create a fully functional organ: one that not only replicates a human ability, but extends it using embedded electronics.

"The design and implementation of bionic organs and devices that enhance human capabilities, known as cybernetics, has been an area of increasing scientific interest," the researchers wrote in an article published online May 1 in the scholarly journal Nano Letters. "This field has the potential to generate customized replacement parts for the human body, or even create organs containing capabilities beyond what human biology ordinarily provides." 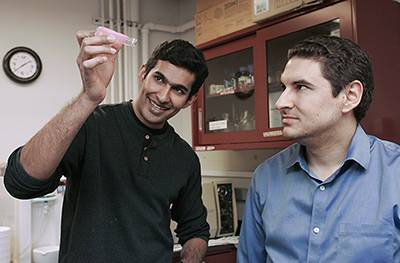 Standard tissue engineering involves seeding types of cells, such as those that form ear cartilage, onto a scaffold of a polymer material called a hydrogel. However, the researchers said that this technique has problems replicating complicated three-dimensional biological structures. Ear reconstruction "remains one of the most difficult problems in the field of plastic and reconstructive surgery," they wrote.

To solve the problem, the team turned to a manufacturing approach called 3-D printing. These printers use computer-assisted design (CAD) to conceive of objects as arrays of thin slices. The printer then deposits layers of a variety of materials — ranging from plastic to cells — to build up a finished product. Proponents say the process, also called additive manufacturing, promises to revolutionize home industries by allowing small teams or individuals to create work that could previously only be done by factories.

Creating organs using 3-D printers is a recent advance; several groups have reported using the technology for this purpose in the past few months. But this is the first time that researchers have demonstrated that 3-D printing is an effective strategy for interweaving tissue with electronics.

The technique allowed the researchers to combine the antenna electronics with tissue within the highly complex topology of a human ear. The researchers used an ordinary 3-D printer to combine a matrix of hydrogel and calf cells with silver nanoparticles that form an antenna. The calf cells later developed into cartilage.

Manu Mannoor, a graduate student in McAlpine's lab and the paper's lead author, said that additive manufacturing opens new ways to think about the integration of electronics with biological tissue and makes possible the creation of true bionic organs in form and function. He said that it may be possible to integrate sensors into a variety of biological tissues; for example, a doctor could replace a patient's torn knee meniscus with a bionic one to monitor strain on the new cartilage during physical activities to prevent another tear.

David Gracias, an associate professor of chemical and biomolecular engineering at Johns Hopkins University and co-author on the publication, said that bridging the divide between biology and electronics represents a formidable challenge that needs to be overcome to enable the creation of smart prostheses and implants.

"Biological structures are soft and squishy, composed mostly of water and organic molecules, while conventional electronic devices are hard and dry, composed mainly of metals, semiconductors and inorganic dielectrics," he said. "The differences in physical and chemical properties between these two material classes could not be any more pronounced."

The finished ear consists of a coiled antenna inside a cartilage structure. Two wires lead from the base of the ear and wind around a helical "cochlea" — the part of the ear that senses sound — which can connect to electrodes. Although McAlpine cautions that further work and extensive testing would need to be done before the technology could be used on a patient, he said the ear in principle could be used to restore or enhance human hearing. He said electrical signals produced by the ear could be connected to a patient's nerve endings, similar to a hearing aid. The current system receives radio waves, but he said the research team plans to incorporate other materials, such as pressure-sensitive electronic sensors, to enable the ear to register acoustic sounds.

The team also included Ziwen Jiang, a high school student at the Peddie School in Hightstown, N.J., who participated as part of an outreach program for young researchers in McAlpine's lab.

"Ziwen Jiang is one of the most spectacular high school students I have ever seen," McAlpine said. "We would not have been able to complete this project without him, particularly in his skill at mastering CADs of the bionic ears."

Support for the project was provided by the Defense Advanced Research Projects Agency, the Air Force Office of Scientific Research, National Institutes of Health, and the Grand Challenges Program at Princeton University.