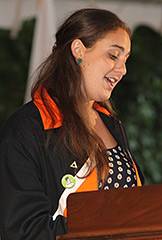 Senior Catherine Cohen gives a light-hearted address to her classmates and guests, calling Princeton "literally the best place on Earth." 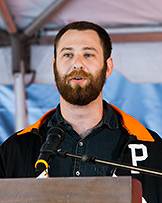 Senior Dan Abromowitz speaks about the power of friendships forged during the four years at Princeton, noting "the spirit of Princeton lives in each of us."

At Princeton University's Class Day, held on Cannon Green June 3, seniors celebrated the achievements of their peers and members of the University community — with the primary goal of having fun.

In the convivial spirit of the day, Remnick's remarks poked fun at everything from Princeton's "eternal Halloween colors" to his father calling his comparative literature major "fancy English" and his mother announcing that her son "would now surely be able to open a 'comparative literature store.'"

He set all jokes aside, however, to acknowledge the challenges that so many face just to get into a university like Princeton. "I know well that some of you faced early hardships — some event or condition that doesn't conform to the cartoon of idyllic childhood or adolescence," he said. "Some of you faced real struggle to get here. And being here, you are, in some ways, the light of your families." 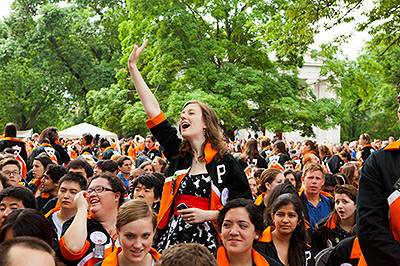 Seniors cheer and applaud the accomplishments of their peers while showing their spirit as "the great Class of 2013." (Photo by Denise Applewhite)

In a Shakespearean twist, Remnick, a Pulitzer Prize-winning author, said, "to graduate is lovely; to exist divine," but posited that the most important thing about the "good fortune" of having earned a Princeton degree, is "what you might do with it."

Remnick was named an honorary member of the Class of 2013 and received a class jacket. Tilghman, who is stepping down as president June 30, was given the same honor. She said she shared some of the seniors' sentiments about leaving Princeton but acknowledged feeling "confident that '13 is going to be our lucky number."

In the spirit of new beginnings, she said: "Yes, we are now ready for the world. It's as if the fire inspector is whispering, 'fly, my little birds, fly.' And fly is exactly what we expect you will do.

"Go forth and puncture the orange bubble," she told the seniors. "Be in the nation's service and the service of all nations … Change the world. Make us proud." As Tilghman closed her remarks, the graduating class shouted, "Shirley! Shirley! Shirley!" 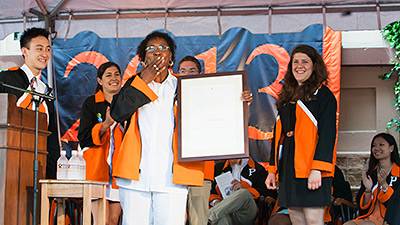 Helen Joynes, a bus operator with First Transit, the TigerTransit service, is named an honorary class member. Students thanked her for greeting riders with a smile, saying, "The weekend is only a few days away." (Photo by Denise Applewhite)

Student speaker Dan Abromowitz shared reminiscences from marching in the freshman Pre-rade to posting photos on the Instagram social media service at the bonfire last fall after Princeton beat Harvard and Yale in football for the first time since 2006.

"You've met incredible people," said Abromowitz, an English major who is also earning a certificate in creative writing. "Their individual contributions to this campus enriched your experience of it, and vice versa. You don't need to have won the title: the spirit of Princeton lives in each of us." 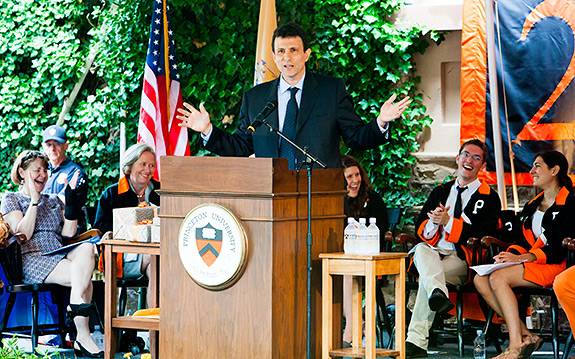 In his keynote speech, Remnick pokes fun at Princeton for "the eternal Halloween of its school colors" and reflects on the importance of freedom and "meeting the demands, the responsibilities, that freedom asks of you." (Photo by Denise Applewhite)

Catherine Cohen, an English major who is earning a certificate in theater, called Princeton "literally the best place on Earth" and said she learned to appreciate the unique strengths of her peers by forming genuine friendships. "The bonds we form here are more important than the awards, honors and titles," she said. 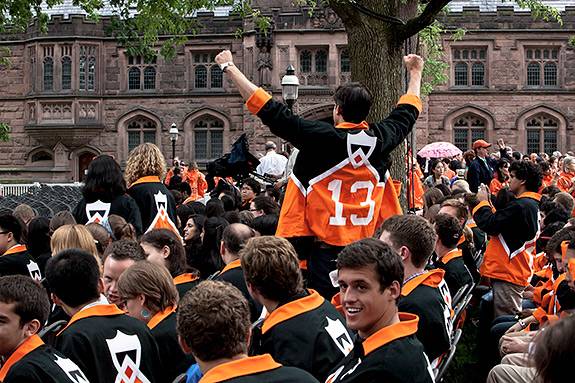 Seniors express their excitement during the festivities with shouts of joy and smiles all around. (Photo by Steve McDonald)

In his remarks, Remnick embraced a theme of freedom, saying he had no doubt that the members of the graduating class would lead fulfilling lives, but "personal success is not the same thing as meeting the demands, the responsibilities, that freedom asks of you."

He noted that freedom "is by no means a universal condition. Freedom is rare, fragile and provisional." Citing dramatic struggles for freedom from Tiananmen Square in 1989 to more recent events in Egypt and Tunisia, Remnick said that "in those moments of historical delirium, if you squinted just so, liberty was within easy reach. The lock of history had been tripped." 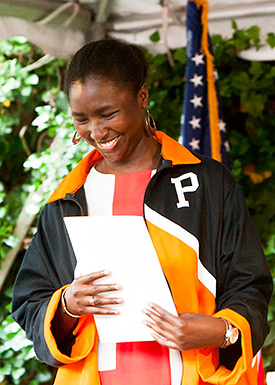 Kitan Akinosho receives the Allen Macy Dulles '51 Award, which is given to a senior whose activities while at Princeton best represent or exemplify the University's informal motto, "Princeton in the nation's service and in the service of all nations."(Photo by Denise Applewhite)

Remnick told the students that after prom, after graduation, "we all, in the course of our lives, no matter how modest or private, will make decisions that are bound to shape the nature of freedom as we actually live it. You're not free when you are poor, or sick, or ignorant. You are not free when you're unable to shelter your own thoughts from surveillance. You are not free in the face of impending environmental disaster."

Added Remnick: "Globalism is not just the ubiquity of Starbucks and the iPhone. Globalism is the intensification of common responsibility. And this means that the future of freedom enlists and implicates pretty much everyone. Particularly people of talent, of means, of mobility. And that includes you."

He said the real world has "no syllabus. There are no courses or distribution requirements." And he noted that "freedom, like curiosity, is, in some part, a muscle that atrophies when it goes unused … You came here not merely to set out on a trade or profession, but to exercise the freedom of your minds. You're needed in the larger world … The project of building a free society isn't something you can farm out to the experts. It never ends. You must, in some way, play your part."

Senior class president Zach Beecher, a concentrator in the Woodrow Wilson School of Public and International Affairs and an ROTC cadet who will enter Fort Dix in the fall as a second lieutenant in the U.S. Army, reflected on the journey he and his classmates have taken.

"It's time to take stock of what we learned here; of who we are; of what we aim to be; where Princeton fits in our own individual narrative that will continue to be written," Beecher said. He encouraged the members of his class to recognize that "within all of us is an incredible sense of possibility."

President Shirley M. Tilghman delivers her last Class Day speech, peppered with jokes and words of wisdom. "Go forth and puncture the orange bubble," she said. (Photo by Denise Applewhite)

In addition to the speeches, seniors were presented with awards for community service, athletics and leadership. The class also named its honorary class members.

Though a storm threatened throughout the ceremony — at one point Remnick lauded President Tilghman's many contributions to the University, remarking, "She even controls the weather!"— the rain held off, and the sun broke through the clouds just as the festivities ended with the traditional singing of "Old Nassau."

A webcast of the Class Day ceremony will be available on the Princeton WebMedia site. Graduation activities continue with the University's 266th Commencement ceremony at 11 a.m. Tuesday, June 4, on the lawn in front of Nassau Hall. 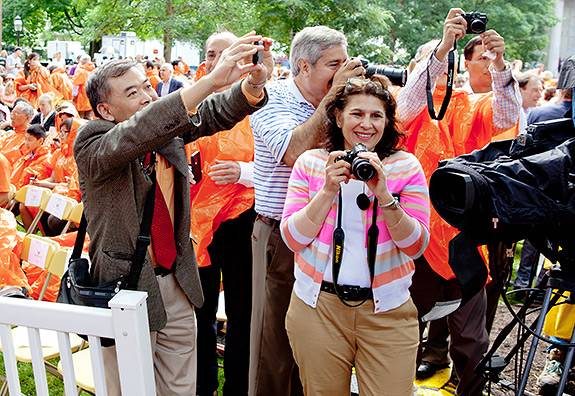 Family members express their pride and commemorate the day with photos and video. (Photo by Denise Applewhite) 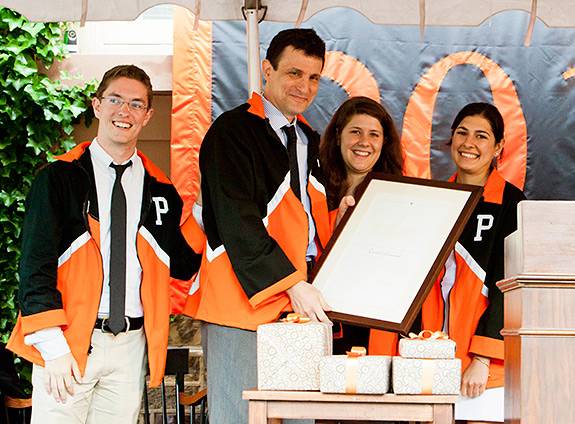 After his speech, Remnick accepts a certificate and dons a class jacket as a new honorary member of the Class of 2013, surrounded by seniors (from left) Grayden Holuber, Lily Alberts and Caroline Hanamirian. (Photo by Denise Applewhite) 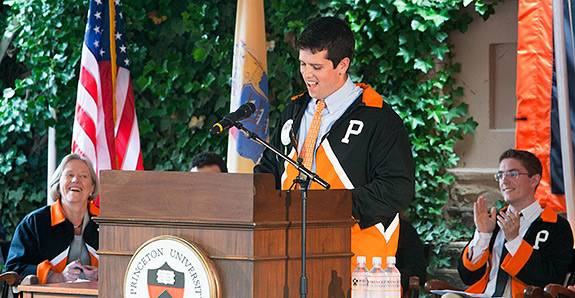 Class president Zach Beecher tells his fellow classmates: "Graduating Princeton awards us the gift of possibility; it is up to us to never stop exploring, no matter how difficult, to turn the possibilities into realities." (Photo by Denise Applewhite) 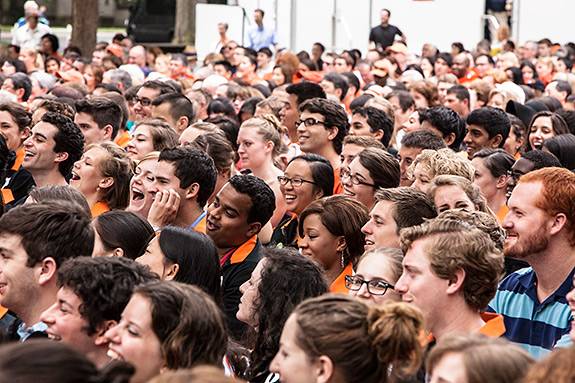 Laughter from the graduating class fills the air at the lighthearted Class Day festivities. (Photo by Steve McDonald)