Physical activity reorganizes the brain so that its response to stress is reduced and anxiety is less likely to interfere with normal brain function, according to a research team based at Princeton University.

The researchers report in the Journal of Neuroscience that when mice allowed to exercise regularly experienced a stressor — exposure to cold water — their brains exhibited a spike in the activity of neurons that shut off excitement in the ventral hippocampus, a brain region shown to regulate anxiety. 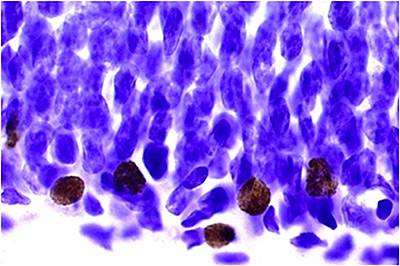 A research team based at Princeton University found that physical activity reorganizes the brain so that its response to stress is reduced and anxiety is less likely to interfere with normal brain function. Running produced a large increase in the number of new neurons in the hippocampus — a brain region shown to regulate anxiety — of a mouse that ran for six weeks (above). The brown cells are new neurons, which are more numerous in active mice than sedentary mice, and the blue cells are mature neurons. (Photo courtesy of the Gould laboratory)

These findings potentially resolve a discrepancy in research related to the effect of exercise on the brain — namely that exercise reduces anxiety while also promoting the growth of new neurons in the ventral hippocampus. Because these young neurons are typically more excitable than their more mature counterparts, exercise should result in more anxiety, not less. The Princeton-led researchers, however, found that exercise also strengthens the mechanisms that prevent these brain cells from firing.

The impact of physical activity on the ventral hippocampus specifically has not been deeply explored, said senior author Elizabeth Gould, Princeton's Dorman T. Warren Professor of Psychology. By doing so, members of Gould's laboratory pinpointed brain cells and regions important to anxiety regulation that may help scientists better understand and treat human anxiety disorders, she said.

From an evolutionary standpoint, the research also shows that the brain can be extremely adaptive and tailor its own processes to an organism's lifestyle or surroundings, Gould said. A higher likelihood of anxious behavior may have an adaptive advantage for less physically fit creatures. Anxiety often manifests itself in avoidant behavior and avoiding potentially dangerous situations would increase the likelihood of survival, particularly for those less capable of responding with a "fight or flight" reaction, she said.

"Understanding how the brain regulates anxious behavior gives us potential clues about helping people with anxiety disorders. It also tells us something about how the brain modifies itself to respond optimally to its own environment," said Gould, who also is a professor in the Princeton Neuroscience Institute. 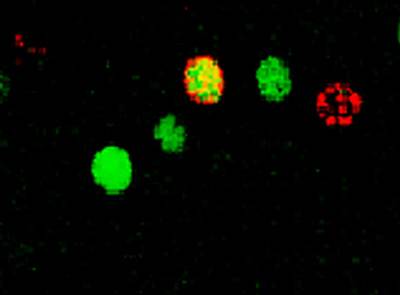 The research was part of the graduate dissertation for first author Timothy Schoenfeld, now a postdoctoral fellow at the National Institute of Mental Health, as well as part of the senior thesis project of co-author Brian Hsueh, now an MD/Ph.D. student at Stanford University. The project also included co-authors Pedro Rada and Pedro Pieruzzini, both from the University of Los Andes in Venezuela.

The brains of active and sedentary mice behaved differently almost as soon as the stressor occurred, an analysis showed. In the neurons of sedentary mice only, the cold water spurred an increase in "immediate early genes," or short-lived genes that are rapidly turned on when a neuron fires. The lack of these genes in the neurons of active mice suggested that their brain cells did not immediately leap into an excited state in response to the stressor.

Instead, the brain in a runner mouse showed every sign of controlling its reaction to an extent not observed in the brain of a sedentary mouse. There was a boost of activity in inhibitory neurons that are known to keep excitable neurons in check. At the same time, neurons in these mice released more of the neurotransmitter gamma-aminobutyric acid, or GABA, which tamps down neural excitement. The protein that packages GABA into little travel pods known as vesicles for release into the synapse also was present in higher amounts in runners.

The anxiety-reducing effect of exercise was canceled out when the researchers blocked the GABA receptor that calms neuron activity in the ventral hippocampus. The researchers used the chemical bicuculine, which is used in medical research to block GABA receptors and simulate the cellular activity underlying epilepsy. In this case, when applied to the ventral hippocampus, the chemical blocked the mollifying effects of GABA in active mice.

The paper, "Physical Exercise Prevents Stress-Induced Activation of Granule Neurons and Enhances Local Inhibitory Mechanisms in the Dentate Gyrus," was published May 1 in the Journal of Neuroscience. This research was supported by National Institute of Mental Health grant MH091567.