Princeton University researchers have observed a self-degradation response to the antidepressant Zoloft in yeast cells that could help provide new answers to lingering questions among scientists about how antidepressants work, as well as support the idea that depression is not solely linked to the neurotransmitter serotonin.

In findings published in the journal PLoS ONE, researchers based in the lab of Ethan Perlstein, an associate research scholar in Princeton's Lewis-Sigler Institute for Integrative Genomics and lecturer in molecular biology, report that sertraline — trademarked as Zoloft — accumulated in the internal membranes of baker's yeast cells.

This buildup caused a swelling and sharp curvature in the membranes of vesicles, bubble-like cell components with a hand in cell metabolism, movement and energy storage. The vesicles then went into autophagy, a protective response in which cells recycle excess or damaged membrane.

But yeast cells lack serotonin, which is the primary target of antidepressants, Perlstein said. By observing a reaction to sertraline in an organism that does not contain the drug's conventional target, Perlstein and his co-authors have found significant evidence suggesting that antidepressants engage in pharmacological activity beyond regulating serotonin. Perlstein worked with co-first authors Jingqui Chen and Daniel Korostyshevsky, as well as Sean Lee, all three senior research specialists in Perlstein's lab. 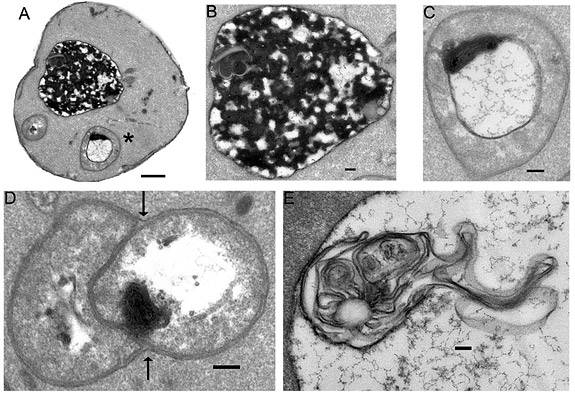 Princeton University researchers observed a self-degradation response to the antidepressant Zoloft in yeast cells that could help provide new answers to lingering questions about how antidepressants work. Five minutes after Zoloft treatment, a yeast cell (A) shows elevated activity, particularly in the vacuole (B), a cell component that recycles damaged or dead cellular material. In the cell vesicle (C), Zoloft resulted in the formation of a black membrane whorl, a thick buildup of membrane layers, on the internal membrane. An image from another yeast cell vesicle (D) shows the internal membrane has become a crescent-shaped bulge as the vesicle enters autophagy and begins to break down. Twenty minutes after Zoloft treatment, a cell vacuole (E) exhibits an unknown, active swirl of membrane growth not seen in the untreated cells that could be part of the final degradation process. (Image by Ethan Perlstein)

Although antidepressants are known to regulate serotonin, it is not completely understood how antidepressants interact with the body's brain cells and what effect, if any, this activity has on treating depression, Perlstein said. Antidepressant accumulation has been observed in the membranes of human cells, the researchers report, but is considered benign.

If, however, the membrane curvature the researchers found has therapeutic significance in treating depression, then the cell membrane could present an additional target for next-generation antidepressants.

More immediately, Perlstein said, the activity of the drug in a serotonin-free organism supports existing research suggesting that depression might also be linked to diminished secretions of brain-derived neurotrophic factor (BDNF), a protein that regulates brain-cell growth.

Perlstein explains his findings as follows:

"The key finding of this paper is that the antidepressant sertraline/Zoloft accumulates within an organism lacking serotonin and induces autophagy, which is a protective mechanism cells use to recycle excess or damaged cell membrane. Specifically, we observed distortions, bulging and buckling in the membrane layer of vesicles inside cells treated with sertraline.

"We saw these effects in the yeast species Saccharomyces cerevisiae, or baker's yeast. Despite it being a simple, single-cell organism, the basic cellular 'plumbing' of yeast has been preserved by evolution in more complex organisms, including humans.

"In fact, the gene networks that we found modify vesicle formation in yeast cells in response to sertraline also exist in human cells, specifically neurons. Vesicle formation heavily influences the ability of neuronal synapses — the tiny gapped connections between nerve cells — to package neurotransmitters and prepare them for use in nerve-cell communication.

"Our finding that sertraline affects vesicle formation suggests a more expansive view of antidepressant function than is currently accepted.

"Dominant now is the monoamine hypothesis of antidepressant function, which was originally formulated in the 1960s and 1970s. It states that depression is the result of a chemical imbalance of neurotransmitters in the brain that may be corrected by artificially increasing the levels of serotonin, or other monoamine neurotransmitters, in the synapses. Sertraline belongs to a class of drugs called selective serotonin reuptake inhibitors (SSRI) that are thought to block the function of specific proteins that normally decrease serotonin levels in the synapses.

"The work out of my lab captures a specific non-serotonin-based biological reaction to an SSRI. Granted, the synaptic serotonin transporter is one site where these drugs interact, but we show that's likely not all they do. These drugs have multiple effects on various targets in the cell — and one of the targets might be cell membranes themselves.

"In addition, our work provides some grounding for the neurotrophic hypothesis of depression, which states that the loss of neural connectivity in specific brain regions such as the hippocampus may actually be the root of depression. The neurotrophic hypothesis fills in many of the gaps of the monoamine hypothesis, including the therapeutic time lag. Since the 1990s, neuroscientists have known that chronic, extended antidepressant treatment can result in the proliferation of brain cells, possibly via a mechanism that involves the growth protein BDNF.

"Altogether, our work suggests that the serotonin-based theory might be an oversimplification and that the cause of depression is not a closed story.

"In my lab, future research will aim to integrate the multiple, interwoven strands that make up the totality of antidepressant pharmacology — including but also beyond serotonin — and translate this knowledge into better antidepressants and diagnostic tools for depression."

This research was published online April 18 in PLoS ONE and was supported by the Lewis-Sigler Institute.

Perlstein is available to discuss his research with interested members of the news media and can be contacted at eperlste@princeton.edu, or through Princeton University science writer Morgan Kelly at 609-258-5729 or mgnkelly@princeton.edu.