An efficient, high-volume technique for testing potential drug treatments for Alzheimer's disease uncovered an organic compound that restored motor function and longevity to fruit flies with the disease, according to new research that could help put the search for an effective Alzheimer's drug on a faster track.

Princeton University researchers report in the Journal of Biological Chemistry that they discovered an organic compound that prevented the formation of protein clumps, or aggregates, found on human brain cells afflicted by Alzheimer's disease. The researchers realized the compound's potential via a high-throughput — meaning many materials can be examined at once — screening process developed at Princeton that examined the ability of 65,000 molecular compounds to inhibit protein aggregation.

When administered to fruit flies bred to exhibit Alzheimer's-like symptoms, the compound — which the researchers call D737 — restored climbing ability and increased the flies' lifespan by several days in comparison to flies that did not receive the compound, the researchers reported.

The compound worked by stopping the accumulation of a peptide known as amyloid beta 42 (Aβ42), which disrupts cell function, is found in high quantities in Alzheimer's plaques, and is thought to initiate the disease's characteristic neural deterioration. The fruit flies were genetically engineered at the University of Cambridge to have human Aβ42 collect in their neurons. As in humans, this accumulation results in memory and mobility loss, disorientation and early death.

Princeton University researchers used a high-throughput — meaning many materials can be examined at once — screening process developed at Princeton to discover an organic compound that prevented the formation of protein clumps found on human brain cells afflicted by Alzheimer's disease. Fruit flies bred to exhibit Alzheimer's-like symptoms maintained their climbing ability after receiving the compound — called D737 — for two weeks (left), whereas flies that did not (right) get treatment exhibited the disorientation and loss of mobility associated with Alzheimer's. (Video courtesy of Angela Fortner McKoy)

Senior researcher Michael Hecht, a Princeton professor of chemistry, said the findings demonstrate a quick and efficient screening method that could help in the search for a medicinal defense against Alzheimer's. Currently, he said, the disease's proliferation in an aging population has outpaced the success of efforts to develop a treatment for it.

"As the population ages, Alzheimer's is the big disease," Hecht said. "There are drugs to control symptoms, but nothing to treat the disease itself. One approach could be to control peptide aggregation as we have done, but the compounds tested so far often fail.

"Our technique would allow scientists to create an artificial genetic system, examine it with a high-throughput screen and find whether it works," Hecht said. "From that they can fish out the best results and test them in other models."

Furthermore, an effective compound such as D737 can reveal information about Aβ42's structure that can be used to formulate other treatments, said lead author Angela Fortner McKoy, a postdoctoral researcher at Rutgers University who received her Ph.D. in chemistry from Princeton in 2011. Fortner McKoy and Hecht worked with second author Jermont Chen, who earned his Ph.D. in chemistry from Princeton in 2008, and Trudi Schüpbach, the Henry Fairfield Osborn Professor of Biology. 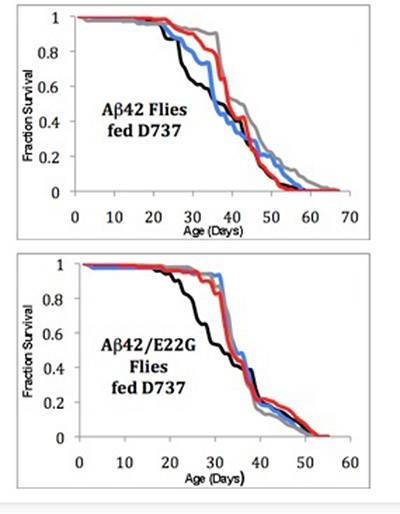 The D737 compound worked by stopping the accumulation of a peptide known as amyloid beta 42 (Aβ42), which is thought to initiate the neural deterioration characteristic of Alzheimer's disease. The compound was tested on flies with a regular human Aβ42 gene (top graph) and flies with a mutant gene that causes extra buildup of the peptide (bottom graph). For each group, flies received none of the compound (black line), or concentrations of 2, 20 or 200 micromolar (blue, grey and red lines, respectively). Flies — particularly those with the mutant gene — survived longer when administered the compound. (Image courtesy of Angela Fortner McKoy)

The Princeton researchers used a screening process developed in the Hecht lab to specifically identify Aβ42 aggregation. First reported in the journal ACS Chemical Biology in 2006, the technique hinges on a fusion of Aβ42 and green fluorescent protein — which glows under ultraviolet light and is found in animals such as jellyfish — that is expressed in the bacteria E. coli. The fluorescent protein does not glow when Aβ42 is able to aggregate. When a compound such as D737 inhibits peptide clumping, however, the E. coli bacterium appears bright green. The efficiency of the screening system stems from the relative simplicity of attaining and working with E. coli, a standard laboratory bacterium, Hecht said.

For the current research, Hecht and his co-authors examined 65,000 randomly chosen organic compounds that Chen acquired from the Broad Institute of the Massachusetts Institute of Technology and Harvard University. The technique revealed 269 compounds that halted the buildup of Aβ42 aggregates. Of those, Fortner McKoy selected the eight most readily available for further testing. Fortner McKoy found that D737 best prevented the accumulation of Aβ42 and reduced mortality in cell cultures. In addition, the researchers found that the compound reduced the production and accumulation of reactive oxygen species, which damage cells.

The researchers then tested the compound on healthy fruit flies with no Aβ42 accumulation, as well as on flies with a regular human-form Aβ42 gene and flies with a mutant gene — which is found in some humans with Alzheimer's — that causes extra buildup of the peptide. For each of these three fly types, one group of flies did not receive D737 while another group was given the compound in concentrations of 2, 20 or 200 micromolar. 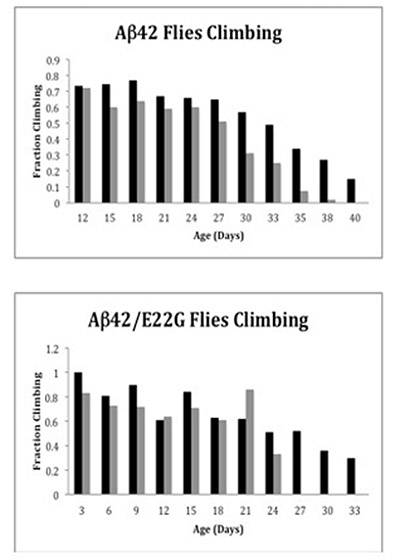 Flies bred to express the Alzheimer's peptide Aβ42 maintained their climbing ability longer after receiving the D737 compound (black bars) than flies that did not receive the compound (gray bars). The top panel shows flies with the standard Aβ42 gene, while the bottom panel shows flies with a disease-causing mutant gene. (Image courtesy of Angela Fortner McKoy)

In the flies with regular and accelerated Aβ42 buildup, those receiving D737 lived an average of four to six days longer than similarly altered flies that were not fed the compound. The healthy fruit flies that received D737 showed no change in lifespan, demonstrating that the compound is non-toxic in fruit flies, Hecht said.

To test mobility, the researchers put 20 flies from both of the genetically altered groups into the bottom of a vial and recorded how many had climbed to the top. After 38 days, only 6 percent of untreated flies with normal Aβ42 accumulation could climb, as opposed to as many as 34 percent of the flies receiving D737.

In flies with the mutant Aβ42 gene, all those left untreated lost mobility after 27 days. Of those given the compound, however, 50 to 78 percent — depending on the dosage — could still climb after the same time period.

Damian Crowther, a group leader in the Department of Genetics at Cambridge who created and supplied the flies used in the Princeton research but had no active role in the work, said that D737 demonstrated a notable ability to suppress in fruit flies the same neurological, physical and mental deficits seen in humans with Alzheimer's.

"It's not common to see such a strong effect in the fly model. Of the compounds that my lab tests, which have been through rigorous in vitro screening, we see effects as good as this in only 5 to 10 percent," Crowther said. "To find that a compound administered orally is able to show beneficial effects on both of these fly phenotypes indicates that the drug can access the neurons and, once within the brain, presumably control the aggregation of amyloid beta peptides."

Crowther said the Princeton research further supports the approach of curbing the buildup of Aβ42 and related variants of the amyloid beta peptide to treat Alzheimer's. In the middle stages of accumulation, variations of the peptide can be highly toxic to neurons and kill them, he said. But the work by Hecht and his co-authors helps show that blocking amyloid-beta aggregation can be safe and potent.

"There is always a worry when looking for aggregation-blocking agents that the aggregation process may be interrupted at the wrong point," Crowther said.

Although the compound's success in flies would not necessarily translate to humans, Fortner McKoy said, its effectiveness illustrates that worthwhile treatment candidates can be uncovered with the Princeton screening method.

"It inhibited the peptide aggregation effectively enough so that we could see an improvement in the flies," Fortner McKoy said. "In general, a compound like this would be further developed and changes would be made to it to test its efficacy in humans. But the fly results show that it is worth testing this compound in another model."

The paper, "A novel inhibitor of Aβ peptide aggregation: From high throughput screening to efficacy in an animal model for Alzheimer's disease," was published Nov. 9 in the Journal of Biological Chemistry. The research was funded by grants from the Alzheimer's Association, the Howard Hughes Medical Institute and the National Institutes of Health.