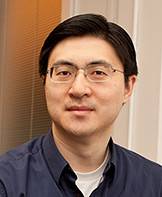 Mung Chiang, a noted researcher in communications networks who also is an entrepreneur and a leader in online education, has been appointed director of Princeton University's Keller Center, effective March 31.

The Keller Center, part of the School of Engineering and Applied Science, promotes courses, co-curricular programs, entrepreneurial activities and events geared toward students across campus with a goal of "educating leaders for a technology-driven society."

Chiang, the Arthur LeGrand Doty Professor of Electrical Engineering, succeeds Sanjeev Kulkarni, an electrical engineering professor who has been named dean of the Graduate School after leading the Keller Center for three years.

Dean of the School of Engineering and Applied Science H. Vincent Poor, who was the founding director of the Keller Center, said that Chiang has the experience and breadth of knowledge to build on the center's substantial accomplishments.

"I have had the pleasure of working with Mung in several contexts over the past decade," Poor said. "Given his interests and abilities, I'm expecting great things from him in this role."

The engineering school created the center in 2005. Three years later, Dennis Keller, a member of the Class of 1963, and his wife, Constance, created a $20 million endowment for the center. The center has grown to support courses in technology and society, entrepreneurship, and engineering in community service. A number of the classes are taught by distinguished visiting faculty drawn from academia and industry.

In recent years, the Keller Center has become a hub of entrepreneurship on campus. It conducts the annual Innovation Forum, a showcase for University research with the potential for commercialization, and runs eLab, a summer accelerator program for student startups. As part of its lecture series, "The Creative Mind:  Innovation, Design and Entrepreneurship," the center hosts speakers who share their formidable experiences with the wider campus community.

Chiang said he hoped to "build on the amazing work done by Kulkarni and his predecessors." He said one of the Keller Center's greatest strengths is its ability to offer opportunities to students that they might not find anywhere else.

"The Keller Center has been a very unique and important part of the campus in both entrepreneurial activities and in educational innovation," Chiang said. "It expands Princeton's education and research strengths along both of these directions. What is really exciting about the center's mission and its programs is that they help broaden Princeton students' pathways to leadership in today's technology-driven society."

Chiang, who joined the Princeton faculty in 2003, chairs the University's Entrepreneurship Advisory Committee and, last year, he headed the Classroom Design Committee. He is the founder of the EDGE Lab, which develops network theory, systems and applications and seeks to turn those fundamental results into practical solutions that benefit society. The lab spins out startups such as one that is pioneering smart data-pricing designed to decrease congestion on mobile networks.

Last year, Chiang was awarded the National Science Foundation's Alan T. Waterman Award, the highest honor that the NSF bestows on scientists or engineers under the age of 35. He is a fellow of the Institute of Electrical and Electronics Engineers and received the institute's Kiyo Tomiyasu Award in 2012.

Chiang has been heavily involved in online education, both through teaching and analyzing the effectiveness of different online learning systems. An online version of his undergraduate course "Networks: Friends, Money and Bytes" has drawn more than 180,000 students since the fall of 2012. In recognition of his contributions as an educator, he received the 2013 Frederick E. Terman Award from the American Society of Engineering Education. His textbook for the course, which offers an online feature of personalized learning, received the 2012 PROSE Award in Engineering and Technology from the Association of American Publishers.

"This is an exciting time for the Keller Center," Chiang said. "As part of the engineering school that reaches out to the entire Princeton community, it helps amplify Princeton's unique strengths. It is a real privilege to become its next director."

Poor praised Kulkarni for "a tremendous run as director of the Keller Center."

"He has expanded the entrepreneurial programs significantly, bringing in many talented visiting faculty members, starting the highly successful eLab program, and many other activities," Poor said. "He is leaving a legacy of new opportunities for students throughout the school and the University."