"We saw technology affecting nearly every aspect of public and private life and knew we needed to broaden engineering education far beyond its traditional borders," said H. Vincent Poor, now dean of the School of Engineering and Applied Science. "Our vision was to teach technology more broadly in a societal context and also to engage with the community outside the University."

This purpose was reflected in the center's inaugural programs: the integrated Engineering, Mathematics and Physics course for incoming engineers, a set of cross-disciplinary courses including an entrepreneurship class, and the first annual Innovation Forum. Over the past 10 years, the Keller Center has continued these initiatives and expanded much further.

Started in 2005 as the Center for Innovation in Engineering Education, the center was renamed in 2008 in honor of educational innovator Dennis Keller, Class of 1963, and his wife, Constance Keller, when the couple gave $20 million to endow the center. Now students, faculty and alumni from all parts of the University take part in Keller programs each year — attending one of the center's 15 courses, participating in any of 60 events, obtaining an internship to explore engineering beyond Princeton, participating in its eLab entrepreneurship program, or taking advantage of the services offered by the University's new Entrepreneurial Hub.

"When we celebrate the 10th birthday of the Keller Center, it's not only about cutting the cake," said Mung Chiang, the director of the Keller Center and the Arthur LeGrand Doty Professor of Electrical Engineering. "This is about planning the future decades that will continue to broaden Princetonians' pathways to make a positive impact in society."

A video and the following student stories reflect just a few of the ways students engage with the Keller Center. 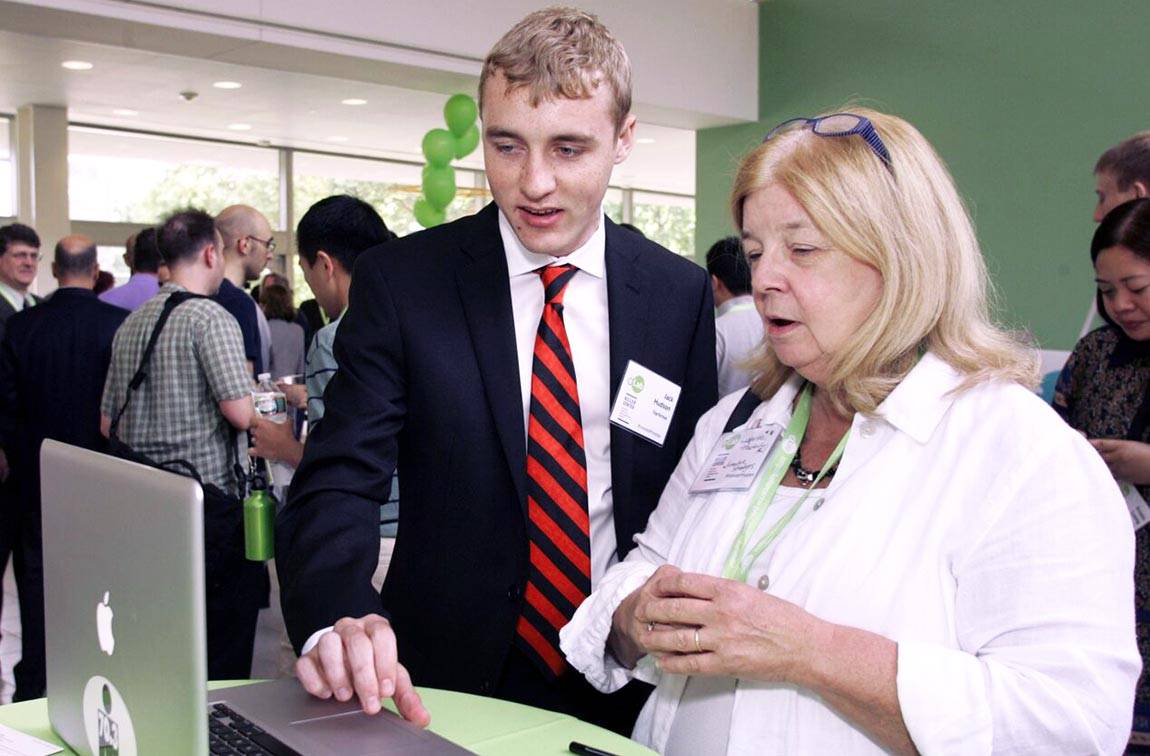 Jack Hudson, left, teamed up with his freshman year roommate to start a company to teach American Sign Language. Here he talks with alumna Lorette Pruden about the company during the Keller Center's annual eLab program for helping students build entrepreneurial ventures. (Photo by Frank Wojciechowski for the Office of Engineering Communications)

In Jack Hudson's freshman year, the thought of starting a company was far from his mind. That was until he and his roommate, Evan Corden, met Colin Lualdi, a deaf student in their hallway. Hudson ended up collaborating with Corden and Lualdi in the TigerLaunch competition hosted by the Princeton University Entrepreneurship Club and pitched the idea of SignSchool, an easy-to-use and interactive website to learn American Sign Language. They won first place, and with it, admission to the Keller Center's eLab Summer Accelerator Program in 2014.

"The Keller Center gave us a lot of really helpful resources, and the program was an awesome experience. There were classes every week that would cover a different topic related to starting a company. The Keller Center also provided us with an advisory team of successful entrepreneurs, who had experience in our field. These advisers helped us through the challenges we had, such as whether to target businesses or go straight to the general consumer. The fact that the Keller Center was able to connect us with these advisers made a really big difference.

"The Keller Center really embraces any ideas you have. They do everything they can to help you develop it, whether it's connecting you with advisers who have been through the whole entrepreneurship process or venture capitalists and lawyers." 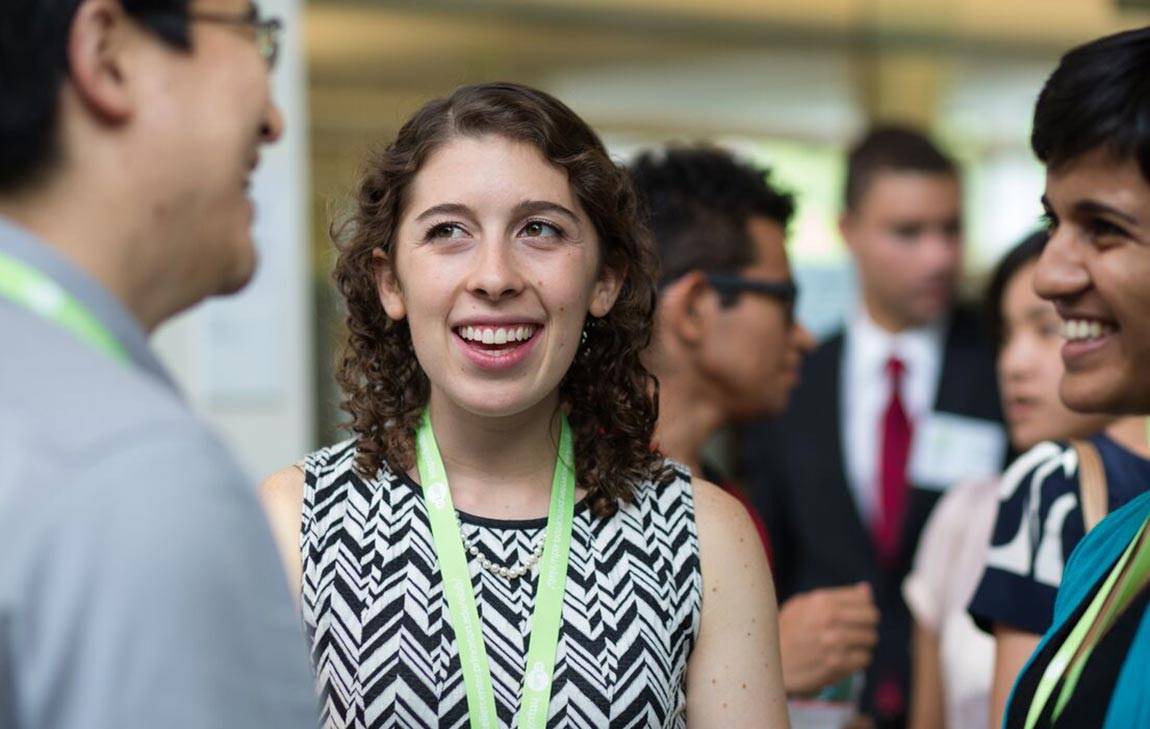 Hannah Miller, center, has participated in several Keller Center programs including serving on the center's student advisory board and finding an internship with a startup company. Here she talks with fellow students at Keller's eLab Demo Day in 2014. (Photo by Victoria Sulewski/Fotobuddy for the Office of Engineering Communications)

Hannah Miller had no previous exposure to entrepreneurship when she started her summer internship with IguanaMed, a small startup founded by a Princeton alumnus focused on developing medical scrubs. But Miller, who has worked as a member of the Keller Center's student advisory board since fall of her junior year, credits the internship with exposing her to the workings and passion of a start-up company.

"I really enjoyed working in the relaxed but hard-working environment of a small, young business, where conversations with the president happen on a daily basis and the whole company enjoys lunch together every Friday. Going into the position, I had no knowledge about the medical apparel industry, or about how smaller, startup businesses operate. But at the internship, I was able to do a lot of meaningful jobs that dealt with different aspects of the company, from sales and marketing to quality control.

"My internship with IguanaMed showed me how rewarding it is to come up with inventive ideas and solutions for challenges that initially seem insurmountable. On day one, I was assigned an open-ended marketing project. I was initially a little overwhelmed since I didn't know much about the industry and there wasn't a 'right way' to do it. But it turned out to be a great exercise in learning to research and figure things out on my own. I learned that this is an extremely valuable skill when starting a business." 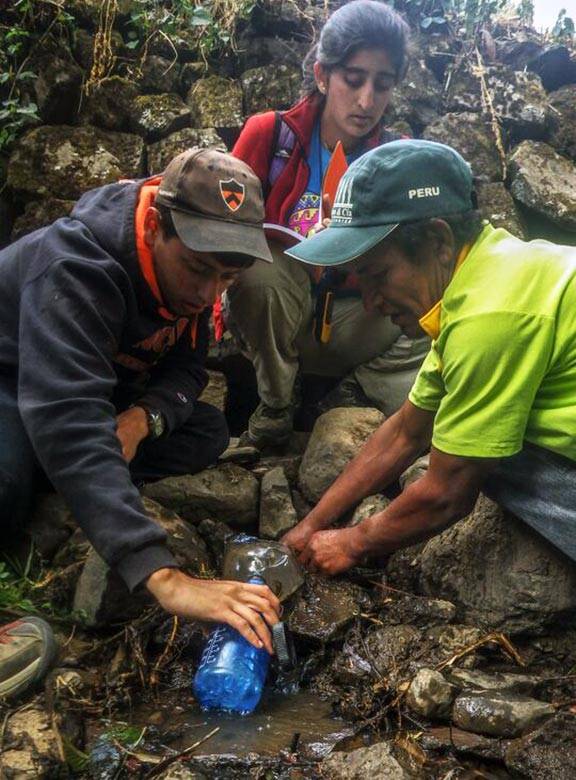 Kasturi Shah, center, participated in Engineers Without Borders, which receives support through the Keller Center. As part of the program, Shah traveled to Pitajaya, Peru, to help install a system to bring clean water to the remote town. (Photo courtesy of Kasturi Shah, Class of 2016)

Kasturi Shah has worked extensively with the Keller Center through Engineers Without Borders (EWB) as co-project manager of the chapter's Peru team. For three successive summers, Shah was part of a student team that EWB sent to La Pitayaja, Peru, to implement a multi-stage potable water distribution system. The past summer they succeeded in provided running water to every house.

"The Keller Center has handled a lot of behind-the-scenes administration — they take questions from the EWB board and help us plan reunions events, speakers and so on. They also organize the Sustainable Engineering and Development Scholars (SEADS) Program, which helps EWB evaluate their development projects.

"Throughout the years, the Keller Center has provided Engineers Without Borders with absolutely essential logistical and financial support. They handled our accounts and coordinated our funding to make sure we were supported abroad by issuing us credit cards, which was a godsend. Given that we do a lot of international trips as a chapter, sometimes more than once a year, that kind of support is absolutely essential. If anything goes wrong and there's an emergency, we can rely on the Keller Center for help. They've done a huge amount and I don't know where we'd be without that support."

In his freshman year, David Prilutsky enrolled in EGR 191: An Integrated Introduction to Engineering, Mathematics and Physics, a course offered by the Keller Center. Better known as EMP, the course replaces the standard math and physics curriculum taken by engineers. EMP offers a hands-on approach to engineering principles with a lab that is centered on building, launching and analyzing a water-powered bottle rocket.

"The classes are so small that's there's an instant sense of community. The teachers and staff were amazing, and I also made most of my best friends from EMP — we'd always do problem sets together every night.

"The physics lectures and demos were cool—but the best part was the lab. We created a model for how our rocket would fly based on certain parameters and compared it to our actual flight path. It was really cool how we were actually able to able to create a pretty accurate model of how the rocket would fly in the end. It was a lot of work, but really in-depth and hands on — and a lot of fun." 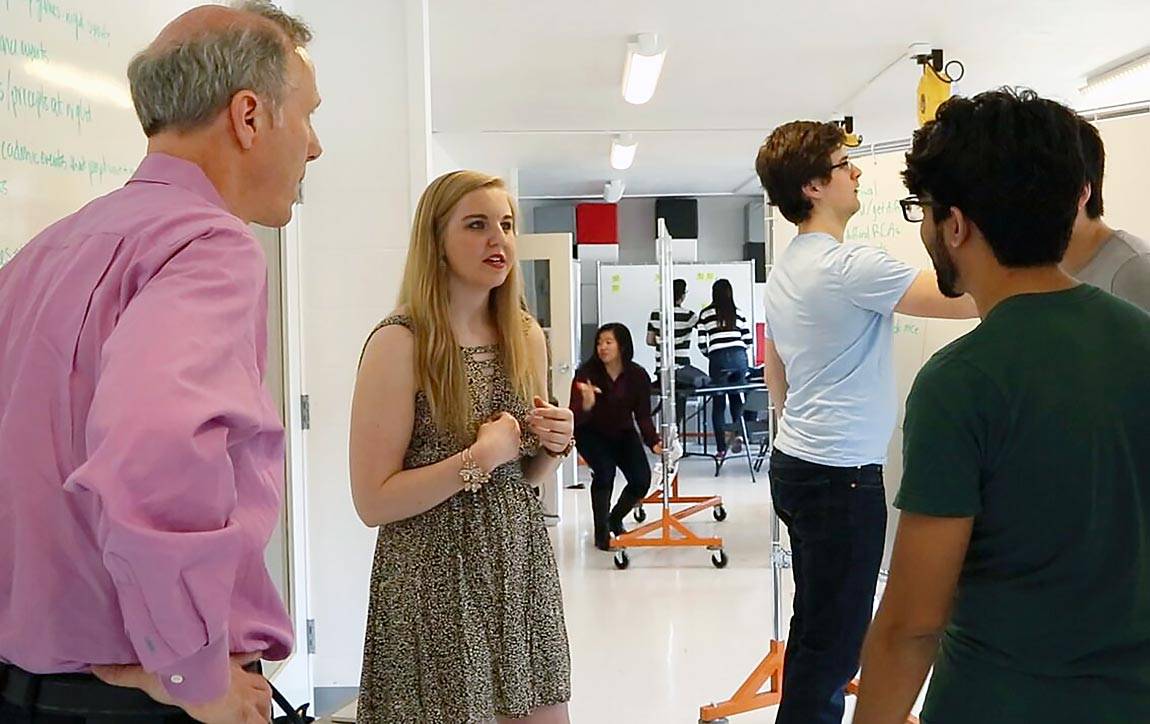 Jenna Rodrigues, center, who graduated in 2014, credits the class "Creativity, Innovation and Design" with changing her outlook toward solving problems and inspiring her to help bring new types of thinking into the educational system. The class is taught by Derek Lidow, left, who is part of the entrepreneurship faculty at the Keller Center. (Photo by Danielle Alio, Office of Communications)

As the daughter of two entrepreneurs, Jenna Rodrigues had much exposure to startups from a young age. Still, even as she became involved entrepreneurship herself, she found that her greatest challenge was to create ideas and examine society with a critical eye. Rodrigues, who was involved in founding the Sustainable Fashion Initiative at Princeton as well as Deià, a social commerce company, was inspired by design classes offered through the Keller Center. Specifically, Rodrigues took the course "Creativity, Innovation and Design" taught by Derek Lidow, an entrepreneurship specialist with the Keller Center and the Department of Electrical Engineering. Building on years of his own business experience and scholarship, Lidow breaks conventions in his class by replacing a lecture approach with hands-on problem solving and culminating in developing creative solutions to extremely difficult social problems such as high-risk drinking and sexual assault.

"Professor Lidow's class taught me to access a part of my brain that I had otherwise completely neglected up until that point. After being exposed to new ways of thinking, I came to realize that for the majority of my academic career, I had been a part of an education system that largely reinforced 'convergent thinking' — where a question was posed that had only one right answer. This class challenged me to think divergently and to question assumptions to identify new problems and develop new solutions. It was amazing to see people really pushing themselves and come up with different ideas. By the end of the class, students were taking risks left and right and came to see that learning is not only about giving the right answer, but also about asking new questions and pushing themselves to new limits.

"I wish I had understood how to think like this from when I was young. The class made me really interested in the role that divergent thinking plays in the education system at large. There are many naturally innovative students who fall through the cracks because the system does not typically enforce the type of thinking that they do best. This class really inspired me to begin thinking more about how we could bring design thinking to students at a younger age, so at the most basic level, they become inherently curious and start asking questions about the world around them. The people thinking divergently are the ones changing industries, so in many ways, the progress of our society depends upon them. It is our responsibility to give students the foundation that they need to build something from nothing, to implement change — and that is exactly what this class did for me."