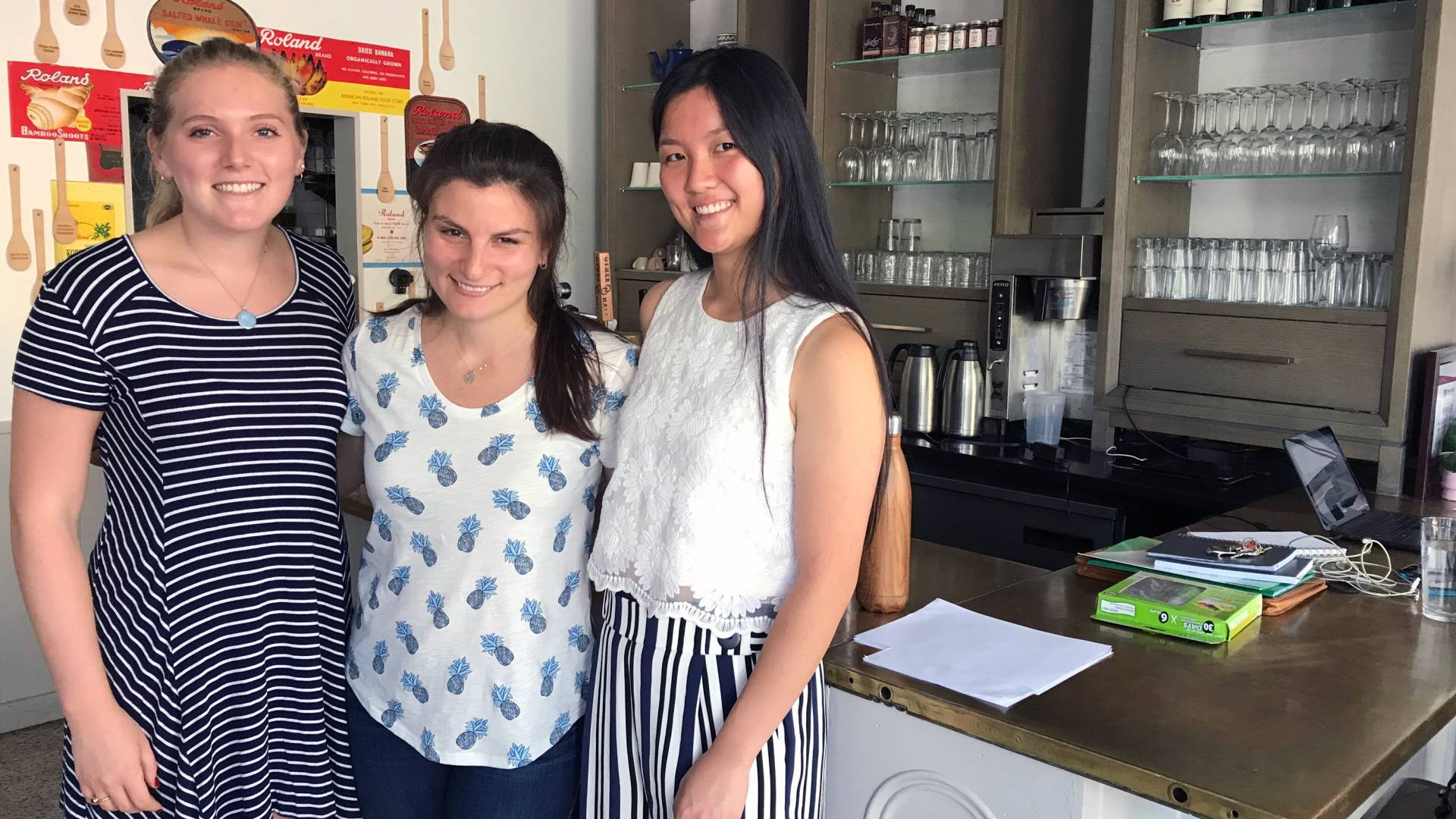 Princeton sophomore Allison Huang was a few weeks into her internship last summer and feeling a little pressure. Huang was responsible for selling tickets to a premier event for a nonprofit restaurant and culinary school for refugees, and the school’s staff was anxious about the turnout.

“Every day Kerry would say "18 tickets!" then "23 tickets!" said Huang, who is majoring in the Woodrow Wilson School of Public and International Affairs. The school staff watched the numbers bump up.

"And we sold out!" Hannah Waxman, a senior majoring in history and fellow intern with Huang at the nonprofit, chimed in during a recent interview.

The event, a dinner at the nonprofit Emma’s Torch in Brooklyn, was later featured in The New Yorker magazine by a food writer who attended.

"You feel like you have a direct impact," Huang said. "It's very exciting."

Having a direct impact on a startup venture is one of the key ideas behind the Princeton Startup Immersion Program run by the Keller Center for Innovation in Engineering Education.

As in a conventional internship, students in the immersion program are placed with a company for the summer to learn the ropes. But unlike most internships, students work in small, early-stage businesses and nonprofits and live together in housing arranged by the Keller Center. The center’s staff also programs evening and weekend activities and speakers on topics related to entrepreneurship throughout the 10-week program.

"When I have visited the program sites these last couple summers, if I hadn't known these were our students, I would have thought they were a regular part of the team," said Lilian Tsang, who directs the startup immersion program. "I've heard from many students how much they learn and how much responsibility they are given. It's really rewarding for them to see their work become part of the company." 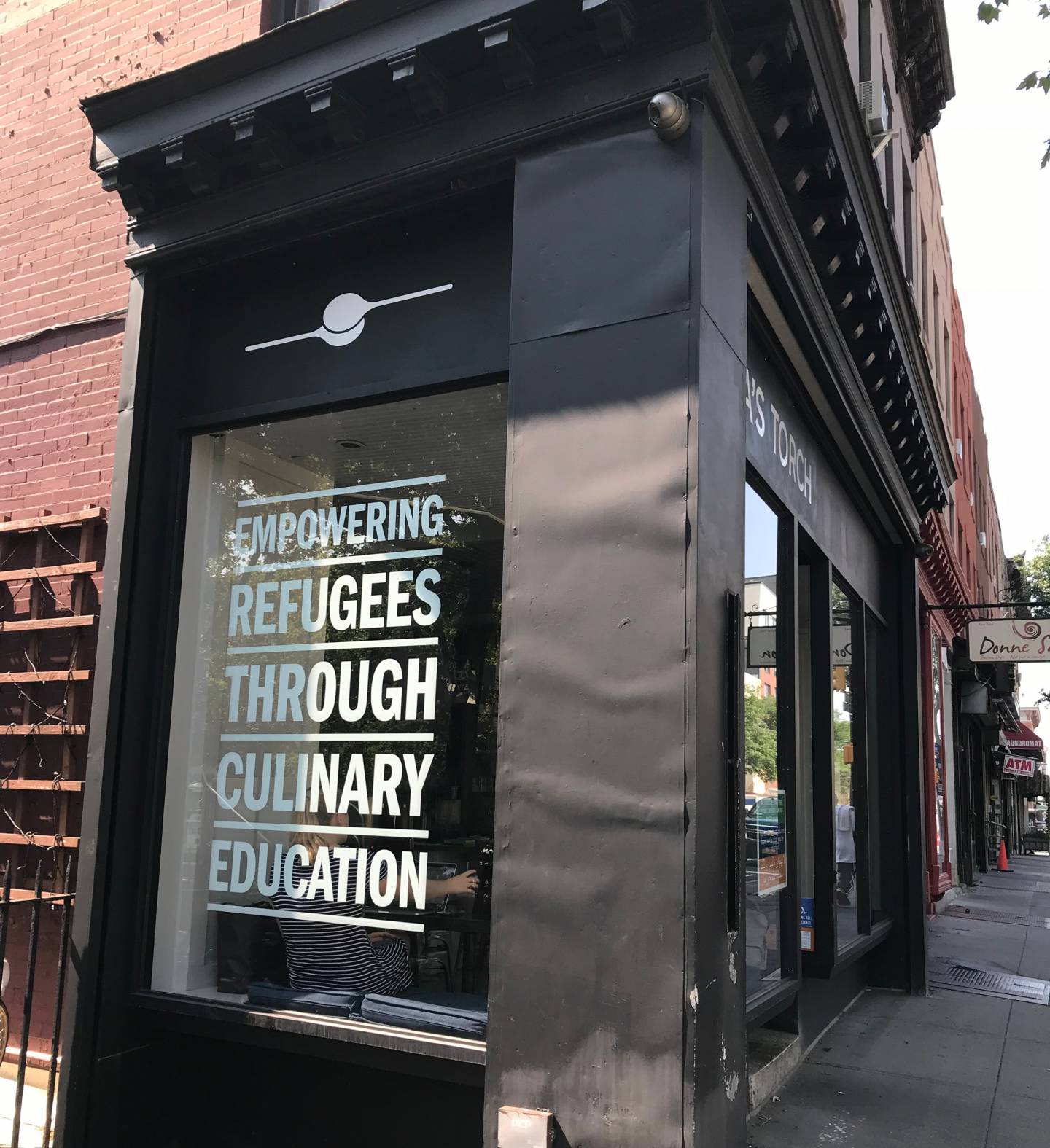 Emma’s Torch is a nonprofit restaurant and culinary school with a mission of helping refugees land jobs in the food industry. Princeton alumna Kerry Brodie founded Emma’s Torch in 2017 and moved into its current location in the Carroll Gardens neighborhood of Brooklyn, New York, in 2018.

Emma's Torch, where Huang and Waxman interned, helps refugees land jobs in the food industry. Brodie, who graduated from Princeton in 2012 with a degree in Near Eastern studies, started the nonprofit in 2017 to combine her lifelong interest in food and cooking with her conviction that more must be done to help refugees. Brodie named the organization in honor of Emma Lazarus, the poet whose words "Give me your tired, your poor/Your huddled masses …" are on the Statue of Liberty.

In addition to culinary training, Emma's Torch provides English classes and interview training, as well as a network of supportive relationships. It also runs like a business, going toe-to-toe with Brooklyn's many ambitious eateries.

"We might be a nonprofit and our bottom line is serving our students, but we have a total business mindset," Brodie said.

Once a month, the restaurant pulls out the stops for a special ticketed dinner when four of its trainees — often just months from arriving in the United States with official refugee status — wrap up their whirlwind training. Serving dishes inspired by the cuisines of the trainees' home countries, these capstone dinners are also an opportunity for the restaurant to pull in paying customers.

That's where Huang came in. In marketing Emma's Torch, Huang worked on focusing her writing and better understanding her audience. It was exciting, she said, to see that work pay off in a sold-out event.

Food writer Hannah Goldfield of The New Yorker attended the dinner and raved about the "perfect shakshuka" (a Tunisian dish with eggs baked in tomato sauce) and the "thrilling" graduation dinners. Her article ended by telling the story of one Jamaican graduate whose ambition is to open her own restaurant called Noah's Ark to offer the same high-end cooking to poor and well-heeled customers alike.

While Huang focused on marketing, Waxman was assigned to development, the fundraising arm of Emma's Torch. An immediate responsibility was researching vendors of customer relationship management services, which Brodie wanted for Emma's Torch to keep track of its donors as well as in-kind donors of ingredients, and customers and staff. Waxman researched vendors, consulted with experts and made a pitch to Brodie, who went with one of the final options.

"I think that is one of the really cool things about the program," said Huang. "We have an opportunity to be part of the team and create a lasting impact."

Despite their shared excitement about building Emma's Torch, neither Brodie nor Huang or Waxman originally would have described themselves as entrepreneurs. "I'm working on saying it without a pause — 'I am … an entrepreneur,'" Brodie said. Huang and Waxman said they might not have applied for the immersion program if not for finding Emma's Torch among the participating startups, but once they were in the program they gained an appreciation for an entrepreneurial approach to seeking opportunities and solving problems.

"I completely did not consider myself in that category," Waxman said. But once she learned more about the internship program, she was excited to learn about entrepreneurship through the Keller Center's structured approach. "I felt that by looking at things through the lens of entrepreneurship I could gain exposure to many different industries. I didn't know much about venture capital or any of these things, and it's been really interesting learning about all that in a crash course."

Brodie said the internship would only succeed if she found self-starters who could run with a task and bring ideas.

"I've been really impressed and excited by the work they've done," Brodie said as she sat with Huang and Waxman at one of the restaurant tables. "You see how we use it every day: We sold out of an event I was worried about selling tickets for, we've brought in more money and more funding, we've been able to go after more grants because we have more hands on deck."

"The idea is that if I hand you a problem, your job is to find a solution," Brodie said. "In hiring across the board, whether it's for a general manager or an intern, that's the attitude I need and we have that in spades here, so I've been very grateful."

Applications for the 2019 Princeton Startup Immersion Program are open Nov. 5 through Dec. 1, and interested students may register for information sessions Oct. 17 and Nov. 13.