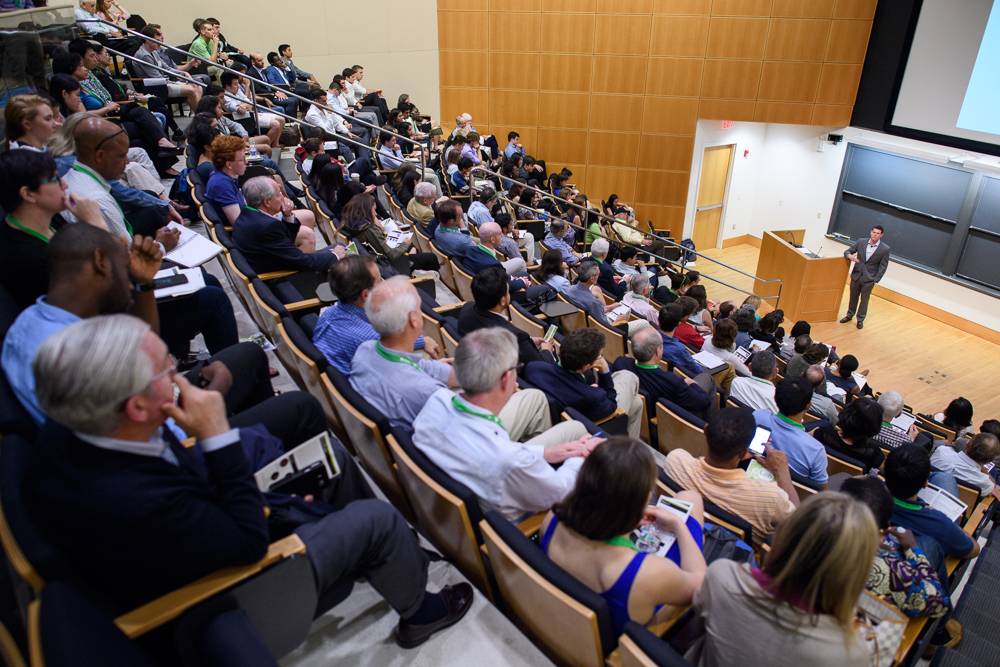 Six teams described their startup ideas at the annual Demo Day presentation. The two-day event, held in Princeton and in Manhattan, is organized by the Keller Center for Innovation in Engineering Education.

The HomeWorks team had one question for the audience: How many of you feel safe in your communities? Nervous laughter followed as most people tentatively raised their hands.

That’s not always the reality for the low-income students Homeworks wants to serve.

“It’s just insane how much of a difference there is in the crime rate in Princeton compared to Trenton,” said Natalie Tung of Princeton's Class of 2018 and the executive director of HomeWorks, a nonprofit working to open a boarding program to assist students in Trenton. “We’re just 20 minutes away,” said Tung, who is majoring in English.

The five-member Homeworks team was one of six participants making presentations on Aug. 15 and 16 at Princeton University's sixth-annual Demo Day. The event offered teams of students the opportunity to present the results of a summer of work in the eLab program at the Keller Center for Innovation in Engineering Education’s Entrepreneurial Hub in Princeton.

“Over the course of 10 weeks, our teams have worked exceptionally hard, and they’re excited to showcase their ideas for you,” said Cornelia Huellstrunk, executive director of the Keller Center, as she kicked off the event.

This was the fourth time AppNexus, an online advertising firm that was founded by Brian O’Kelley, a member of the Class of 1999, hosted the gathering at its Manhattan headquarters. It took place in a small auditorium that AppNexus describes as its "Razzle Dazzle" space and had all the trappings of a Silicon Valley product launch. It followed presentations held the day before at Princeton.

Each team presented a two-minute video, gave an eight-minute pitch and fielded five minutes of questions from an expert panel Wednesday night. The experts included Erich Sternberg of the Class of 1990, CEO of AlwaysCare Benefits, Inc.; Joy Marcus of the Class of 1983, executive vice president of GM Digital Video at Condé Nast; Danielle Cohen-Shohet of the Class of 2012, CEO and co-founder of GlossGenius; and Jonathan Askin, founder and director of the Brooklyn Law Incubator & Policy Clinic.

The students were prepared to respond to the challenging questions. They appealed to the investors in the audience to provide capital and in-kind contributions so that their companies would be able to fund research and continue to grow. They also contended that their various enterprises would help society in such ways as serving low-income residents or preserving the environment. 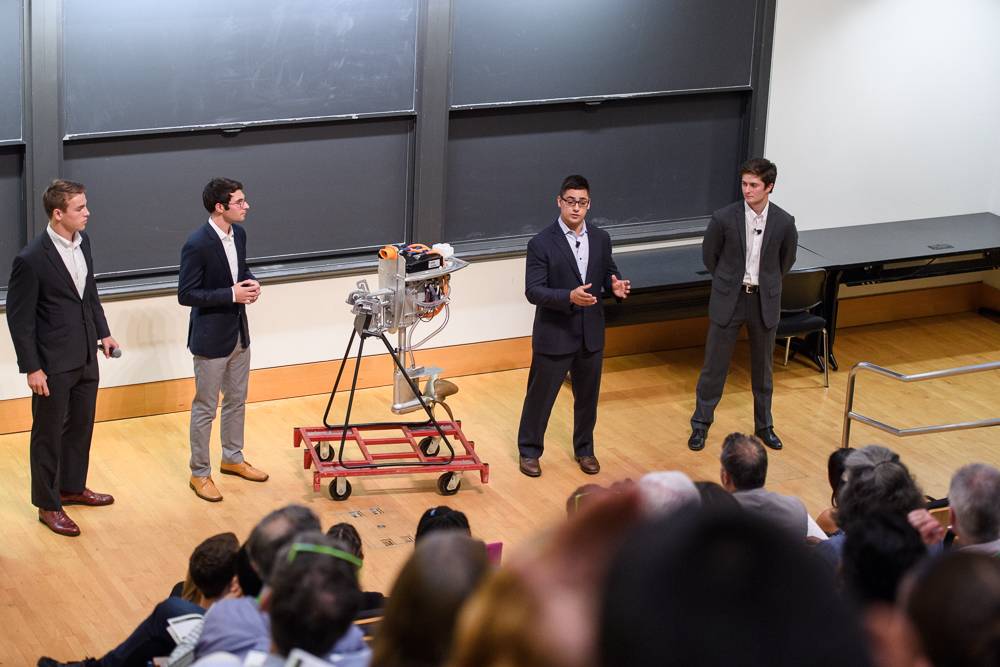 Members of the Flux Marine team (from left): Jonathan Lord, Class of  2018; Derek Wacks, Class of 2021 (Columbia University); Daylin Frantin Class of 2018 (Boston University); and Ben Sorkin, Class of 2017, present their proposal for an electric outboard motor that they say can outperform gasoline versions.

During the 10 weeks the teams spent in the eLab, they worked with mentors and advisers who helped them shape their visions. They also attended a three-day boot camp, workshops, meetings and lectures together, although their ideas were dramatically different — ranging from a company that wants to provide electricity to underserved markets to a company that sells electric outboard motors to replace traditional gas engines for small boats.

Teams presented on the following projects.

Flux Marine wants to develop a line of electric outboard motors from 20 to 115 horsepower that outperform traditional gas engines. The motors would sell for $17,000, but boaters would save thousands of dollars they would otherwise pay for gas and maintenance, team members said.

The team pulled a shiny new model onto the center of the stage at AppNexus where they extolled its virtues. It’s more reliable than gas. It doesn’t contribute to the millions of gallons of unburned fuel that end up in our waterways each year. And it doesn’t need frequent

“A boater should never have to worry about a boat starting,” said Benjamin Sorkin, the company’s CEO who graduated this year from Princeton's Department of Mechanical and Aerospace Engineering.

Jonathan Lord, who is also studying mechanical and aerospace engineering at Princeton and is set to graduate in 2018, said the company is going to sell the motors to the Princeton crew team, of which he is a member. This sale will serve as a pilot program that they hope to expand to other crew teams. The U.S. Navy has also expressed an interest but the ultimate goal is the consumer market, the team said. 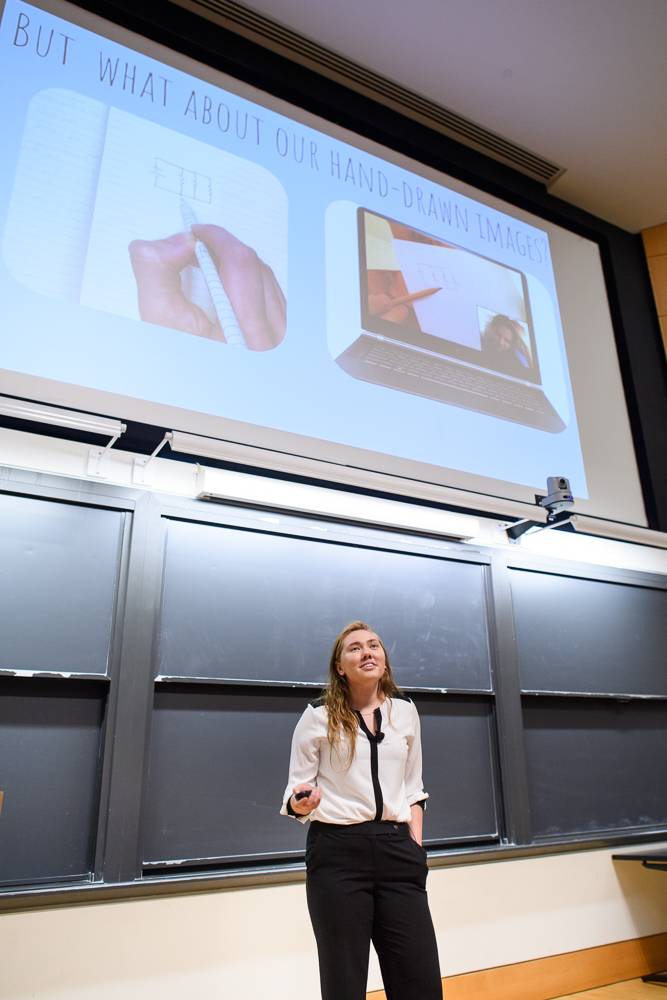 Mary-Grace Stone, Class of 2016, is the co-founder of Scratchwork, a company that has developed software to transfer handwritten material from a pad (paper or electronic) to a computer screen.

Mary-Grace Stone, who graduated from Princeton in 2016 with a degree in politics, is co-founder of Scratchwork, a company that wants to make it easy to write and draw by hand in the digital age.

“We did get a lot of feedback that the written word is dead — but no, it’s not,” she said confidently as students congregated around her display to see how the software her team developed transfers drawings, equations and diagrams from notepaper or an electronic tablet onto a computer screen.

“We are visual thinkers and we like to work out our ideas by hand,” Stone told the AppNexus audience. “But we’re still stuck using the process Newton did.”

Scratchwork is an enhanced whiteboard app that makes drawing feel natural, she said. It allows customers to use their own hardware to draw, scan, edit, share and collaborate in real-time with colleagues and friends anywhere.

In its pilot phase, Scratchwork hopes to initially sign up 25 professors and 500 students to use its app. The students would get a basic package for free while the professors would pay $25 a month for a professional version.

“We’re starting with what we know — the classroom,” Stone said.

HomeWorks admitted five teenage girls to its pilot boarding program in Trenton this summer. The teenagers — HomeWorks calls them scholars — attended Trenton public schools’ summer classes and returned to the home each afternoon to participate in workshops on such subjects as time management before taking part in fun activities like dance classes.

“Boarding schools are expensive and not accessible to low-income students,” said Elijah Sumners, the community outreach officer for Homeworks who is a native of Trenton and a Rutgers University political science major.

HomeWorks’ goal is to open a full-year program for 10 high school freshmen, all young women in Trenton in the fall of 2018. They have raised more than $110,000 in cash and supplies but said they need another $214,000 to fund the full-year program.

“I think we’re all speechless and so thank you for that,” said feedback panelist Marcus, after the presentation. 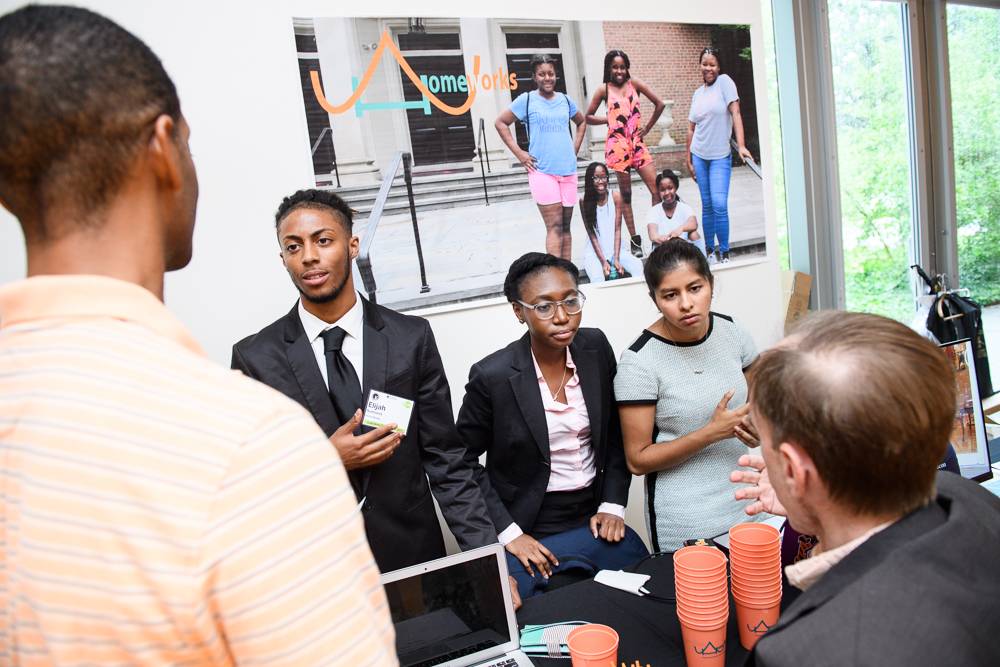 The HomeWorks team, including, from left, members Elijah Sumners, Class of 2018 (Rutgers University); Mofopefoluwa Olarinmoye, Class of 2020; and Shohini Rakhit, Class of 2018, is developing a boarding program to help students in low-income communities.

The audience at AppNexus gasped. The company was selling only $50,000 a year of its products — a plant extract used to counteract the effects of alcohol — when it entered the Keller Center’s eLab Summer Accelerator Program in June. Powell, a 2017 Princeton graduate who majored in religion, paused for dramatic effect, letting the numbers sink in.

The Thrive+ product, dihydromyricetin, comes from plants often made into tea in parts of Asia. The extract has been shown to counteract alcohol intoxication and withdrawal in rats without negative side effects, according to an article in the Journal of Neuroscience, Powell said.

Thrive+ sells it for about $1 a capsule. The customer takes three capsules before bed or with the last alcoholic drink of the night. The company also recommends that customers use a second Thrive+ product to rehydrate after alcohol consumption. The team said its products did not need Food and Drug Administration approval because they’re not drugs.

Thrive+ wants to raise money to manufacture a 12-week supply of the products ahead of consumer orders and to do human studies of its effectiveness, Powell said.

Epigrammar is a company started by three self-described "hackers" and a teacher. Uday Singh, who graduated from Columbia University last year with a degree in computer science, jokingly said he’s “the kid who doesn’t read at all.” Despite that, he and his team are developing a computer platform that “promises unique insight into what students read, how they write and why it matters.”

Michael MacKay, the company’s chief operator officer who is completing his master’s degree in education at the University of Pennsylvania, tried the idea out on fellow teachers at a conference at Penn and said the responses were overwhelmingly positive.

Kwasi Oppong-Badu, a rising senior majoring in computer science at Princeton and the team’s chief data officer, is focused on honing the algorithm and analytics that underlie Epigrammar.

In their presentation, team members sketched how the system works. Teachers sign in to Epigrammar and invite students to join a class on the program. The teachers post a syllabus and assigned texts; as students read the assignments, they can highlight areas on the screen and add notes or questions. At a command from the teacher, Epigrammar creates a test for each student, based in part on the students’ questions. Singh believes that teachers, who spend an average of $500 annually on supplies for their classrooms, would be willing to spend $18 a month to drastically reduce the time they take in creating tests. If 1,000 teachers sign up, the company breaks even, he said.

But Sternberg wondered if teachers would pay for the service. “Even $18 a month is a lot,” he said.

BoxPower’s mission is to bring electricity to off-grid and underserved communities worldwide that rely on diesel generators or have no power at all.

The hybrid microgrid, BoxPower’s first product, can be transported nearly anywhere in the world in a 20-foot shipping container. A single system can power 10 to 15 homes, serve commercial customers such as rural medical centers or cellular tower operators, or power small industrial operations.

The microgrid uses solar power.  Angelo Campus, who graduated from Princeton in 2016 with an independent concentration in technological development, said BoxPower is 80 percent a commercial company with 20 percent of its focus on social impact.

“Our BoxPower system pays for itself in three years with the tax credit,” he said.

The company is demonstrating its system by providing power to the Ramapough Lenape tribe in northern New Jersey. Campus and the company’s other young executives are also talking to the Navajo Tribal Utility Authority about bringing power to 18,000 off-grid customers. He told the expert panel he wasn’t worried about competition because off-grid customers only use the system until they have access to cheaper power on the electric grid.