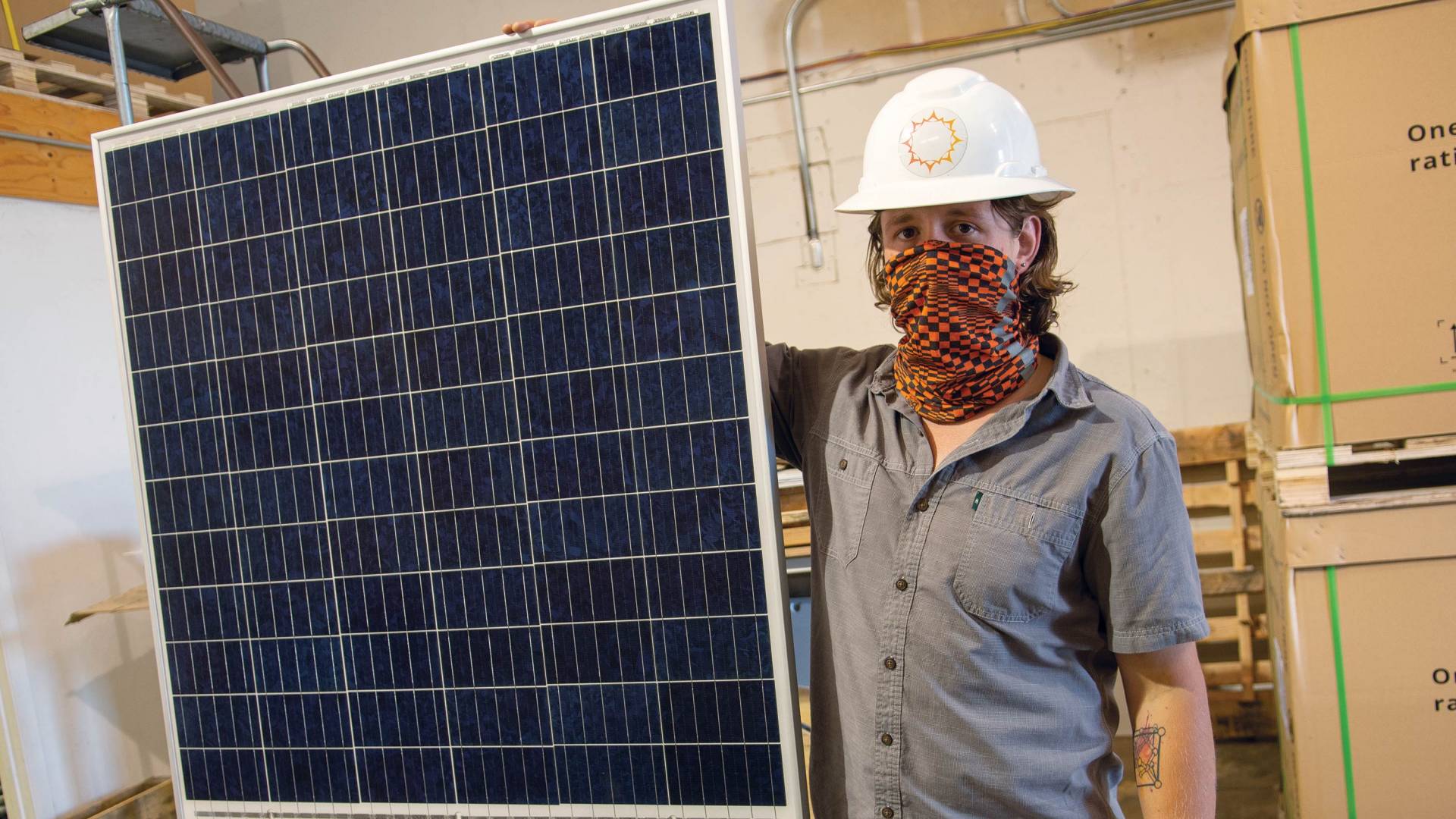 Angelo Campus, a 2016 alumnus, became motivated to find solutions to the impacts of climate change while studying at Princeton University. Today his California-based company, BoxPower, provides containerized microgrids — a sustainable and reliable power source — to customers throughout the world.

Access to reliable power is a critical concern for hundreds of millions of people worldwide, from those living in remote communities without public utilities to entire regions susceptible to severe weather and natural disasters.

Since his graduation in 2016, Princeton alumnus Angelo Campus has worked to ensure anyone needing quick and dependable access to a power source can find it in a simple configuration: a shipping container equipped with solar panels, a battery for energy storage and a backup generator.

His company, BoxPower, builds and distributes these units — what are known as containerized microgrids — and has deployed them in places like Puerto Rico, which lost electrical infrastructure in 2017 due to Hurricane Maria, and the Alaskan backcountry, where Alaska Natives live far removed from electrical power sources.

Workers assemble one of BoxPower’s containerized microgrids. They are built to be easily deployed, especially in areas where electricity is unavailable. Each unit is made up of a shipping container equipped with solar panels, a battery for energy storage and a backup generator.

BoxPower even filled a critical need in Campus’ home state of California in 2019, when wildfires caused public utilities to shut down electrical grids for days.

He also couldn’t foresee that a game-changing technological development was on the horizon: that Tesla would revolutionize the battery and energy storage market — a key component of solar energy systems — popularizing the idea of microgrids.

What Campus did know early on was that he had a passion for renewable energy, engineering and product design, and a strong desire to promote social and environmental good.

He learned about containerized microgrids in 2011 as a senior in high school, when he visited Princeton for a campus tour. The visit strongly influenced his decision to attend the University and to learn more about the technology involved.

As a first-year student, he joined Princeton’s Engineering Projects in Community Service (EPICS) program, which was developing a sustainable alternative to diesel generators in the wake of the 2010 earthquakes in Haiti and their devastating aftermath.

“Generators were deployed [in Haiti] by government, military, Doctors Without Borders, Red Cross,” Campus said. “And then there was a complete shutdown of the fuel supply chain that rendered all of those generators inoperable, causing vaccines, medical supplies, food and water filtration systems to all go down.”

Over 200,000 deaths from preventable diseases in the year following the earthquake were directly attributable to Haiti’s inability to supply power to aid workers, Campus said.

EPICS’ solution to address the problem was called “Power in a Box,” a hybrid wind-solar energy source that was portable and renewable. Campus prototyped and built several systems, which he entered in the Environmental Protection Agency’s P3 Sustainable Design Expo, winning first place and a $90,000 grant. Another system that Campus helped build was delivered to an oceanic research center in Bermuda.

“From my early time working with Power in a Box and the Princeton EPICS center, I knew this was what I wanted to do,” Campus said.

To focus his academics on his goals, Campus switched out of the Department of Civil and Environmental Engineering to create an independent concentration called “Technological Development” that allowed him to fully realize the practical applications of containerized microgrids. He took on advisers from engineering, architecture and anthropology to help him more closely examine the technical, human and social aspects of energy systems.

During his senior year, Campus entered business competitions and began the process of commercializing a rapidly deployable, containerized microgrid. He named his new company BoxPower. 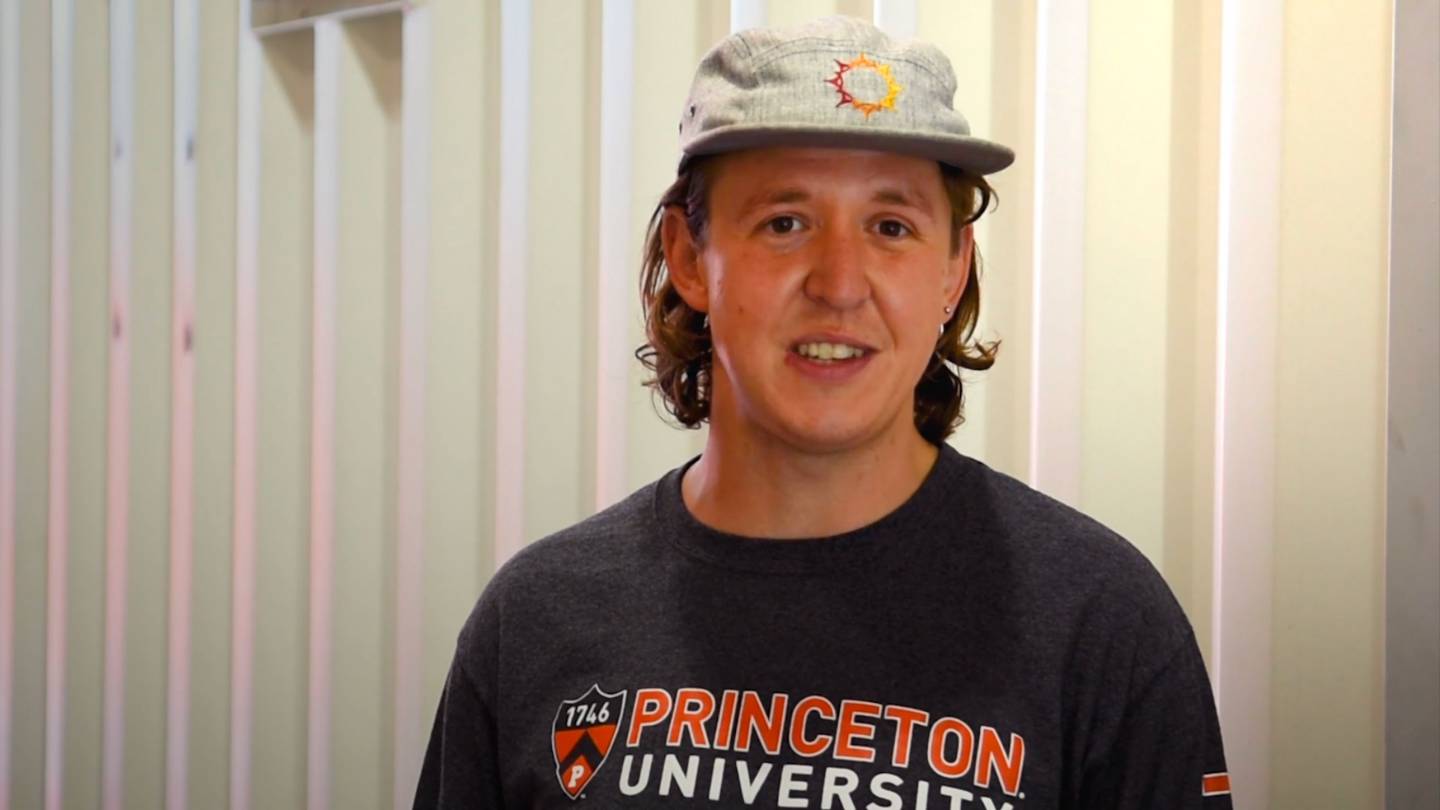 Campus discusses how his interest in climate change and renewable energy solutions while studying at Princeton led to the development of BoxPower.

Video by David Calvert, Associated Press Images, and the Office of Communications

A year after graduating, Campus applied for and was accepted to the Keller Center eLab Summer Accelerator at Princeton, which provides tools, resources and mentorship to budding entrepreneurs.

“The eLab accelerator program was a great program,” he said. “It funded six students to work on BoxPower full time.”

Through the Summer Accelerator, Campus further developed BoxPower. BoxPower also received an investment from Princeton’s Alumni Entrepreneurs Fund, enabling the company to launch its first round of fundraising. It raised about $100,000 from investors to begin prototyping its product.

The company has since grown to 18 full-time employees. In 2019, revenues were approximately $1 million. This year, Campus said they are on track to triple or quadruple that, despite the COVID-19 pandemic.

In the two years since its commercial launch, BoxPower has completed 25 projects, contributing 28 million pounds of lifetime emissions offset of carbon dioxide, a greenhouse gas.

Campus' achievements have received recognition along the way. Campus was awarded an Echoing Green Climate Fellowship and the Princeton Tiger Entrepreneur Award. He also was named one of Forbes’ “30 under 30” for social entrepreneurship.

The rapidly growing need for reliable power where there is no available electrical grid or where the grid has been shut down or failed has buoyed Campus’ young company.

“It’s sort of a coincidence that we were located in the epicenter of the California public safety power shut-off crisis,” he said. “And we’re in a very good position to respond to it. We have seen a lot of growth from large institutional customers, municipalities, state government, investor-owned utilities, and are seeing a lot of excitement and traction in the market here.”

BoxPower also is experiencing substantial growth in the Caribbean, as well as in the Southeastern United States, where increasingly frequent and devastating hurricanes have created an urgent need for microgrid systems.

“They have focused on some niche markets that can be valuable and profitable, and have integrated a very clean and elegant system to make it easy to install in remote areas,” said Tom Leyden, Class of 1977, an advisory board member for BoxPower and senior director for EDF Renewables.

Leyden, who has worked in solar energy for his entire career, said while other containerized microgrids have been developed over the years, BoxPower stands out in its ability to gain traction in areas where there is a substantial need, building its business one project at a time.

“That’s always been the case with solar,” Leyden said. “When you have a good project, you get a ripple effect from that.”

“The challenge of succeeding in this business isn’t the technology, but the financing,” he added.

Nate Lowery, Class of 2006, CEO of LexTM3 and a BoxPower investor, said because the markets in which BoxPower is operating are so fragmented, business relationships need to be firmly built on trust.

“Angelo as an entrepreneur has a knack for building trust, for building relationships and getting the BoxPower name out there,” Lowery said.

Additionally, remote communities are often not well capitalized, so finding economically viable power solutions for them can be challenging, Lowery said. “As solutions become less expensive, which is what BoxPower is helping to do, the market grows,” he said.

About 840 million people worldwide do not have access to power, according to a 2019 report from the International Renewable Energy Agency.

“The idea that we could help bring power to people who don’t have the opportunity to get it otherwise is something that gets us both out of bed in the morning,” Lowery said. “I firmly believe energy is one of the keys to helping address global poverty. With energy you can have better access to health, better access to food supply chains, education, etc. Energy enables a lot of things.” 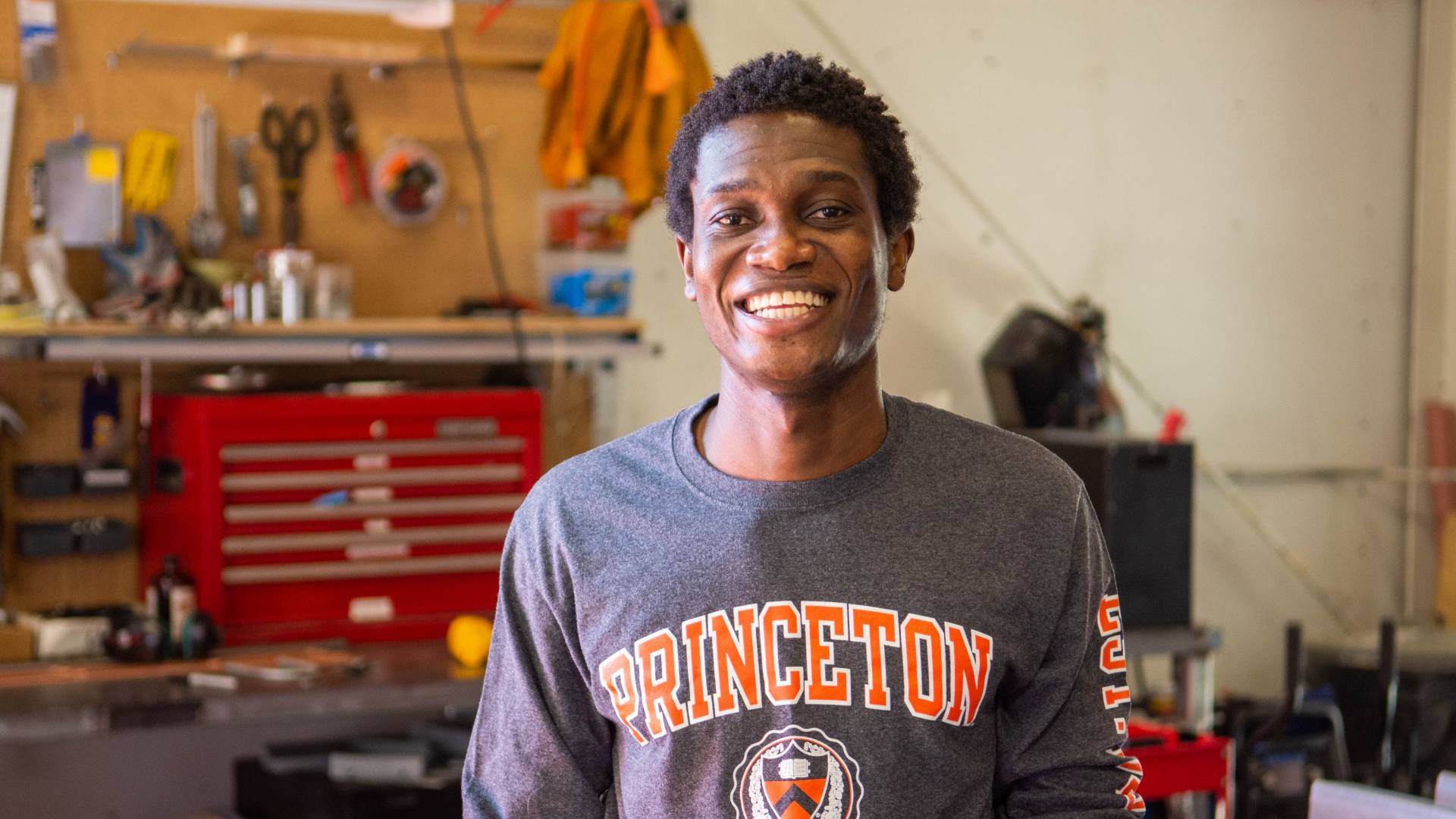 In addition to working with fellow Princeton alumni as investors and advisers, Campus also employs one of his original eLab Summer Accelerator interns, Alexander Asante, Class of 2019, who leads BoxPower’s applications and project engineering.

A native of Ghana who grew up without reliable power in his own community, Asante studied electrical engineering at Princeton and joined BoxPower in the hope that one day he can return home with strategies for providing reliable, alternative energy sources.

In 2019, the Princeton Environmental Institute funded four student interns to work at BoxPower. Campus said he hopes to find more funding opportunities that would allow Princeton students to learn about containerized microgrids and how they can be used in a variety of situations, while also exposing those students to alternative career paths.

“It’s become very important to me to try to extend that opportunity and share my story with other rising Princeton students that with a Princeton degree, you can do anything,” he said. “You can start your own company, you can create your own career and create your own lifestyle into whatever vision you want for yourself and the world.”

“As Princeton alumni, we are among some of the most privileged people in the world,” he added. “It is our responsibility, our duty, to use that privilege to make the world a better place.”

Campus eventually plans to take BoxPower global. He is seeking to partner with traditional power providers that want to expand into renewable energy. He’s also hoping to work with international relief groups including the United Nations, the Red Cross and Doctors Without Borders.

“In so many ways we’re just getting started,” Campus said. “We’re in our early teenage years where we’re learning how to drive. We’re figuring out all the places we can and want to go, and it’s a really exciting time to be doing that.”