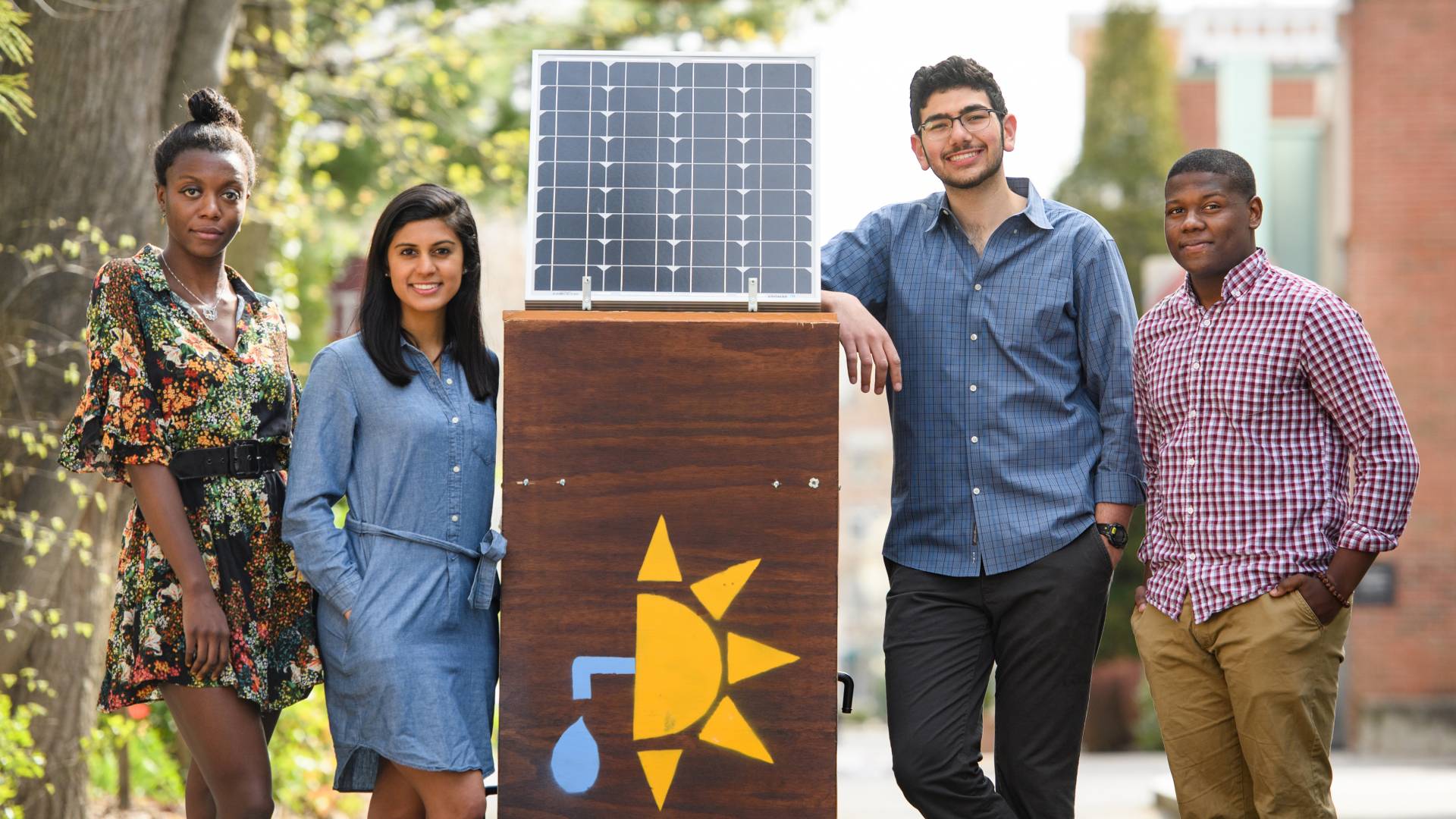 Four Princeton students entered the international Hult Prize competition with a device they built called WellPower, a solar-powered water purifier that also can be used as a power source in remote communities. Pictured from left to right are Victoria Scott, Ayushi Sinha, Noah Schochet and Todd Baldwin.

A group of Princeton undergraduates is determined to create a product they hope will have a life-changing impact on poor and isolated communities around the world.

This year’s theme is “Harnessing the Power of Energy.” For their entry, the Princeton students created a device called WellPower that provides solar-powered water purifiers to communities without access to clean water. The unit fills a critical global need for potable water. It’s also built in a sustainable way, using upcycled solar panels and repurposed automobile lithium ion batteries — both of which would otherwise end up in landfills — to power a water pump and filtration system.

What’s more, the unit is a self-contained power source that can be used for other needs, from refrigerating vaccines to dehydrating foods for storage, or it can be linked with other WellPower devices to create a power grid.

“What we envision is for this to be a larger system,” said Sinha, who is also co-director of TigerLaunch, the nation’s largest student-run entrepreneurship competition.

She and the other students are active entrepreneurs who hope to combine their hustle, technological know-how and business acumen with a desire to do good.

WellPower was one of eight teams to enter Princeton’s first-ever Hult Prize campus event, said Samer Kadamani, a sophomore and Hult Prize director at Princeton. WellPower finished first at Princeton, then entered a Boston regional event and Hult Prize Ivy at the University of Pennsylvania, where the team placed in the top three and top six, respectively.

Led by Schochet, who plans to major in mechanical and aerospace engineering, the students designed the five-foot-by-five-foot device, as well as its specialized water treatment filter, for which they are seeking a provisional patent. Sinha and Scott are computer science majors; Baldwin is studying chemical and biological engineering. The cost of one unit is $600. It can be flat packed for shipping and assembled in an hour by one or two people.

The students arrived at their current stage of development in true entrepreneurial fashion, working through prototypes and dealing with setbacks, including difficulties securing funding for their project. But they also had help along the way. A Princeton solar panel company, Ad Energy, offered advice about the use of solar panels for the device. The students also consulted with Daniel Steingart, associate professor of mechanical and aerospace engineering and the Andlinger Center for Energy and the Environment, who advised them on using recycled car batteries from electric vehicles to store power collected by the solar panels.

Since the students were so close to success at the regional Hult Prize events (only first-place teams advance), they plan to take one final opportunity to secure a wildcard spot at the Hult Prize Accelerator, held this summer at a castle in England. But even if they don’t make it to the final rounds, the students said they will continue developing their product either through the eLab Summer Accelerator Program at the Keller Center for Innovation in Engineering Education or through Tiger Challenge.

They envision WellPower being used in rural places such as in India or Peru, or somewhere like Puerto Rico after a natural disaster strikes, to supply clean water and energy where there is no infrastructure.

“It has so many different applications,” Baldwin said.

Said Schochet, “This is a great way to do social good.”