Even before the Jan. 12 earthquake that devastated Haiti, killing more than 200,000 people and leaving more than 1 million homeless, the citizens of the Caribbean nation were in desperate need of access to clean drinking water and electricity.

After the disaster the need skyrocketed, inspiring a team of Princeton researchers to launch a one-year effort to develop, deploy and test two novel disaster-relief technologies -- a rainwater harvester and filtration system, and a wind turbine for renewable energy production. These technologies would harness Haiti's abundant rainfall and ever-present winds to provide clean water and energy. The team, which includes engineers and architects, is funded by a $100,000 grant from the National Science Foundation (NSF) through the organization's Rapid Response Research program.

"We want to provide a valuable service to Haiti in a time of great need," said Catherine Peters, an associate professor of civil and environmental engineering who is leading the project. "We also want to advance technologies for disaster recovery more broadly and create resources for sustainable reconstruction in Haiti and around the world."

On April 6, Raymond Joseph, the Haitian ambassador to the United States, met with the research team to talk about reconstruction efforts during a visit to the University.

"Only one-fifth of the country was hit [by the earthquake], but it affected 80 percent of our economy" and had a devastating human toll, he said, stressing the need to rebuild with modern services and infrastructure dispersed throughout the nation, rather than concentrated in the capital city of Port-au-Prince. "Today is a new day for Haiti -- the new day is the decentralization of the country with the new technologies to make it happen." 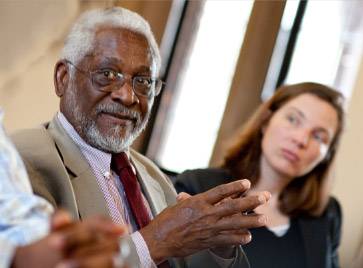 As part of an April 6 visit to the University, Raymond Joseph (left), Haiti's ambassador to the United States, met with a team of Princeton researchers, including Sigrid Adriaenssens (right), assistant professor of civil and environmental engineering, to discuss a research project to develop, deploy and test a rainwater harvester and filtration system as well as a wind turbine for renewable energy production. (Photo: Sameer Khan)

In keeping with this philosophy, both of the Princeton team's technologies are designed to operate independently from existing infrastructure, such as water and electricity transmission lines, and they can be positioned where needed to provide a local source of crucial resources. To enable rapid deployment, both the rainwater filtration unit and wind turbine are designed for transport in standard shipping containers, which are incorporated into the systems once they are put in place.

The NSF grant will support the construction and testing of one prototype of each system, which will be deployed in the vicinity of Jacmel, located on the country’s southern coast. The technology designs were developed by Princeton architecture faculty member Jane Harrison and ATOPIA_Research, her Princeton-based nonprofit design organization. The Haiti effort is an extension of the organization’s PITCH_Africa project, which has received funding from the Annenberg Foundation to develop an extensive range of rainwater-harvesting and energy-generating structures for communities in sub-Saharan Africa, where water is scarce and electricity nonexistent.

The first technology, a rainwater harvester with an integrated water filtration system, could serve a population of 50 to 100 people. The system builds on extensive work by team member Winston Soboyejo, a professor of mechanical and aerospace engineering, on the design and construction of pot-shaped water filters using locally available materials, such as clay and sawdust. When the filters are fired in a kiln, the sawdust burns away, leaving behind microscopic pores that trap bacteria and pollutants but allow the passage of clean water, which can be collected in a vessel for storage.

Harrison and Soboyejo began working together last year to scale up the filtration technology for the PITCH_Africa project to handle large quantities of water in the harvester and serve a bigger population. A "water filtration bank" that incorporates many individual filters has been incorporated into the rainwater harvester prototype.

The rainwater harvesting unit will use two 20-foot shipping containers as a cistern for clean water, capable of holding nearly 16,000 gallons of water. Based on rainfall patterns in Haiti, this system should be able to process up to 80,000 gallons of clean water each year.

While the clay filters themselves must be retired every two to three years, the researchers say they are easy and inexpensive to replace, which will encourage local manufacturing. Soboyejo's team has demonstrated the viability of rural production in Nigeria, where a small factory has been established to make the filters. This makes the rainwater harvester and filtration system more economically feasible for use in Haiti than some of the more advanced filtration technologies available today, such as devices that condense and purify water vapor in the air.

Two side-by-side shipping containers will form a 16,000-gallon cistern for clean water in the proposed rainwater harvester and filtration system, shown here in a design developed by ATOPIA_Research. Building on work led by Winston Soboyejo, a professor of mechanical and aerospace engineering, the system will rely on water filters constructed from locally available materials, such as clay and sawdust, to process around 80,000 gallons of water each year. (Image: Courtesy of ATOPIA_Research)

"This makes sense to me because it builds on something I knew as a kid," Joseph said about the Princeton filtration technology, sharing his memories of gathering rainwater in a cistern during his childhood. "Here is a project that is similar but on a higher level, using water more efficiently."

The second technology, a wind turbine designed for fast deployment in a disaster-relief scenario, would generate 5 to 10 kilowatts of electricity and could provide much-needed emergency power to a clinic, small hospital, school or group of homes. Though this amount is small by U.S. standards, where the average person consumes 13,000 kilowatt-hours of electricity per year, it is large relative to the current amount of power production in Haiti, which generates 40 kilowatt-hours per person annually, and larger still for the poverty-stricken rural population that has no access to power. The kilowatt-hours of electricity that will be produced by the turbine will depend on the wind resources in the area chosen for deployment, which is currently under consideration.

Peters, Harrison and Soboyejo are joined on the research team by Sigrid Adriaenssens and Elie Bou-Zeid, assistant professors of civil and environmental engineering; Craig Arnold, associate professor of mechanical and aerospace engineering; graduate students Elena Krieger, Amie Shao, Joy Wang and Pierre Bouzi, who was raised in Jacmel; and undergraduates Dana McKinney and Tessa Maurer. Princeton janitor Josue Lajeunesse, recently featured in the documentary "The Philosopher Kings" for his efforts to provide clean water to his village in Haiti, will assist the team with logistics and implementation.

Members of the team will travel to Haiti from June 16 to June 21 to consider various siting scenarios in and around Jacmel. In future trips, they will deploy the technologies and develop longer-term strategies for use and maintenance of the systems.

In addition to developing and testing the two disaster-relief technologies, the Princeton research team will create a comprehensive map of Haiti’s wind energy resources, using both meteorological measurements and fine-resolution atmospheric simulations. Owing to the predictable and consistent trade winds that blow across the tropical nation, Haiti features many sites that are promising for wind energy development.

"You've taken on major issues here -- water and energy -- that are going to be very important for Haiti," Joseph told the team.