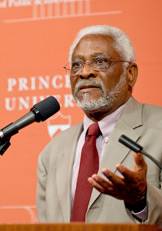 Haiti's ambassador to the United States, Raymond Joseph, presented a lecture at Princeton on April 6 detailing his vision for a "new Haiti," which emphasized decentralization and international investment in his country. Photos: Sameer Khan

Haiti's ambassador to the United States, Raymond Joseph, stressed to a group gathered at Princeton University the need to construct a "new Haiti" following January's devastating earthquake -- with a focus on decentralization and foreign investment.

In a lecture April 6, Joseph cited the extent of damage in the capital city of Port-au-Prince to illustrate the inherent risks of placing too many services in one geographical space. The Haitian government has estimated that 230,000 people were killed and 1.3 million were left homeless in the wake of the Jan. 12 earthquake.

"The new vision for the new Haiti calls for a decentralization of the country," he said.

The lecture capped a daylong visit to Princeton by Joseph, who met privately with faculty conducting research related to Haiti reconstruction, as well as with Haitian staff members and students who were involved with organizing campus initiatives in response to the earthquake.

The human and economic toll from the disaster "shows you the impact of the earthquake that hit only a fifth of the land," Joseph said. "That's the reason why I say decentralization has to be the way we go forward, because everything was concentrated in Port-au-Prince: That's where we have the international airport, that's where we have the University of Haiti."

He emphasized that, along with the need to decentralize Haiti's population and services, Port-au-Prince must be rebuilt by modern standards to create a stronger infrastructure and better housing for its citizens.

Joseph expressed gratitude and hope about global contributions to Haiti, but noted that reconstruction would be difficult and costly. He called for sustained international investment to develop the new Haiti.

"I don't expect the foreign aid to really help us rebuild Haiti. I expect investment in the new Haiti, and I am so glad that the Clinton-Bush foundation has joined in this project here because their role is going to be to find the investment to encourage the new Haiti," he said, referring to the recovery fundraising effort led by former U.S. presidents Bill Clinton and George W. Bush. 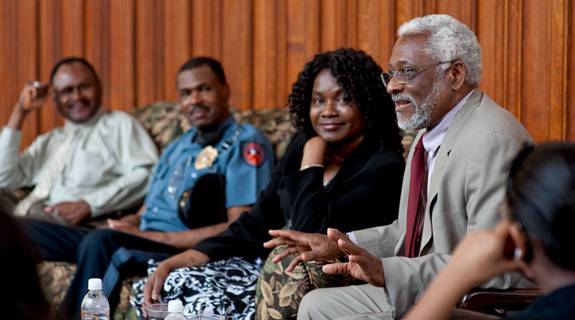 Prior to his lecture, Joseph and his wife, Lola Poisson-Joseph (center), engaged in conversation with Haitian staff members and students who were involved with organizing campus initiatives in response to the earthquake.

Over the long term, Joseph urged the development of a tourist trade that would attract Americans and visitors from around the world.

"The future of Haiti will be what it was before … in the '50s and '60s, when the two major destinations for American tourists were Cuba number one and Haiti number two," he said. "We see a change now; we see that Cuba is coming back, and we expect the same change in Haiti, where democracy has taken over."

Joseph noted that the overwhelming pledge of $5.2 billion in foreign aid that Haiti received at a United Nations conference last week far exceeded the Haitian government's expectations of $3.5 to $3.9 billion.

In response to an audience question about the disbursement of these funds, he explained that a trust fund had been set up at the World Bank, and a board of directors would decide how the money would be spent.

Joseph also thanked Americans specifically for the outpouring of their support after the earthquake.

"Thank you to you people of America for all you've done for us in Haiti since the earthquake," he said. "I am speaking not only in my name, but also the government of Haiti and the people of Haiti. You were wonderful in your response."

The international attention given to Haiti after the earthquake "is very important, and I see a silver lining in it," he said. "For the first time since I've been in the United States, and I've been here quite a few years, people are just focusing on Haiti."

Joseph cited some of Haiti's historical contributions to the world as a pioneering independent black nation. He lamented the fact that much of this history has been overlooked until recently.

"There was a conspiracy from day one that the experience of Haiti should fail," he argued. "It has taken an earthquake of major proportions for us to talk about it and for the whole world to finally turn around and say, 'We need to come to the support of these people.'"

Joseph expressed hope for the country's future in light of the aid the world has provided.

Following his lecture, Joseph took questions from the audience, including from some Haitian Americans who expressed concerns for their home country and asked how they could help. Joseph stressed the need for expatriates to return and contribute to the reconstruction of Haiti.

He ended by urging students in the audience to provide ongoing leadership in the reconstruction of the country.

"I'm counting on you, students who will continue the work that others have begun, so that Haiti will truly become the country that [it] should have been from day one," he said.

On the morning of his visit, Joseph met privately with professors and students from the School of Engineering and Applied Science and the School of Architecture to learn about sustainable reconstruction efforts and natural hazard-related research projects at Princeton.

A focus on sustainability will be essential for "the dawning of a new day in Haiti," Joseph told the group, as he described his first trip to the city of Port-au-Prince after the earthquake.

"In the devastation, I saw a glimmer of hope," he said. "In the debris -- lampposts were down, electrical posts were down, buildings were down -- I saw something standing. … The traffic lights were working. And they were working because they had solar panels. Right then and there, I said, 'Haiti has to go green.'"

At the meeting, Catherine Peters, an associate professor of civil and environmental engineering, described an interdisciplinary effort she is leading to develop sustainable recovery solutions for Haiti. Funded by a $100,000 grant from the National Science Foundation, the project will support the deployment and testing of two novel disaster-relief technologies in the city of Jacmel on the southern coast of Haiti, as well as a comprehensive mapping of the wind energy resources throughout the country. The two technologies involved in the project are a ceramic clay filtration system that can be used for harvesting and treating rainwater and a wind turbine that could provide much-needed power to a clinic, small hospital or school.

"First, we want to provide a valuable service at a time of great need in Haiti," Peters said. "Second, we want to advance technologies for disaster recovery and provide valuable guidance for world aid organizations."

An estimated 500 Jacmel residents were killed and some 4,000 were injured in the earthquake, which damaged 70 percent of the buildings in the city. Research team member and electrical engineering graduate student Pierre Bouzi was raised in Jacmel, where he said he has many well-established relationships with people who can help bring the project to fruition.

"I am very excited to be part of this project, as it is a great opportunity to help my country in this very difficult time," said Bouzi, who will assist with logistics and on-the-ground deployment. "I hope the success of this project will attract more help from funding agencies to expand the good work and thereby improve the living conditions of the population."

University janitor Josue Lajeunesse, who was featured in the documentary "The Philosopher Kings" for his efforts to provide clean water to his village in Haiti, also will assist the team with strategy and implementation.

Joseph's lecture, which was held in Dodds Auditorium of Robertson Hall, was sponsored by the Woodrow Wilson School of Public and International Affairs. His meetings with faculty, staff and students were hosted by the Office of Human Resources, the Office of the Dean for Research and the School of Engineering.

The lecture will be archived online at a later date on the University's WebMedia site. 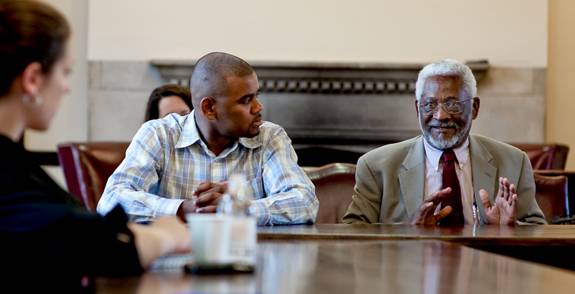 Electrical engineering graduate student Pierre Bouzi (left), who hails from the Haitian city of Jacmel, listened as Joseph shared his thoughts on the country's reconstruction efforts.

Ambassador will speak about 'Haiti After the Earthquake'--UPDATED