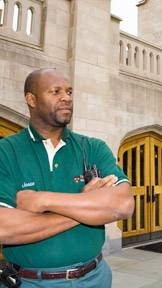 Josue Lajeunesse, a janitor in the University's Whitman College, is featured in the documentary "The Philosopher Kings," which tells the stories of eight janitors at universities across the country. In search of wisdom in unlikely places, the film highlights the everyday triumphs and tragedies of staff whose hard work is often done when no one is looking. The cameras follow Lajeunesse as he helps bring clean drinking water to his family's village in Haiti. (Photo: Denise Applewhite)

Watch an excerpt from "The Philosopher Kings."

From 7 a.m. to 3:30 p.m. each weekday, Josue Lajeunesse is one of Princeton University's 220 Building Services janitors. But off campus, Lajeunesse is a taxi driver, a father, a philanthropist, a community organizer and now the subject of a documentary film.

A native of Haiti who has worked at Princeton for 15 years, Lajeunesse is featured in the documentary "The Philosopher Kings," which tells the stories of eight janitors at universities across the country. "In search of wisdom in unlikely places," the film highlights the everyday triumphs and tragedies of staff whose hard work is often done when no one is looking.

The cameras follow Lajeunesse's work as a lead janitor in Whitman College and other dormitories, and his travels to Haiti as he helps bring clean drinking water to his family's village. The documentary will be shown at 4:30 p.m. and 7:30 p.m. Wednesday, Dec. 9, in McCosh 10, with director Patrick Shen, producer Greg Bennick and Lajeunesse speaking afterward and taking questions from the audience.

The Princeton screenings are free and open to the public. Seating is on a first-come, first-served basis, but community groups of more than 10 are encouraged to contact organizers in advance by e-mailing Sherry Moore or calling (609) 258-8682.

The first screening of "The Philosopher Kings" with the filmmakers and Lajeunesse will be held at 9 a.m. Dec. 9 in the Frist Film Theater for Building Services staff members. The events at Princeton are part of a nationwide tour of the documentary on college campuses and at film festivals.

"Some people close their eyes to what's going on in front of them," Lajeunesse said of the poverty in his homeland. "But if God gave me the knowledge and the view to see these things, then I need to go back and help those people who cannot help themselves."

Lajeunesse was born in Haiti as the youngest of four children. His mother passed away when he was a young boy and he grew up close to his father, a farmer. Lajeunesse served in the military in Haiti and moved to the United States in 1989, ultimately settling in the Princeton area because a friend from Haiti was living here.

Through the documentary, Lajeunesse puts a face to the work ethic, passion and perseverance shared by many of the University's janitorial staff, said Building Services director Jon Baer. Baer noted janitors such as Natasha Bowman, who has worked at the University for 21 years and has been a surrogate parent to some of the students living in the dorms she cleans, or Mohamed Flites, an amateur photographer and historian who immigrated to the United States to escape civil war in Algeria.

"Having managed janitorial and service staff for the past 25 years, I find so many of their life stories compelling. There's a depth to Josue, as there is to so many of our janitors, that transcends what they do as an occupation," Baer said. "Josue is an excellent ambassador for Princeton and for the staff we have here." 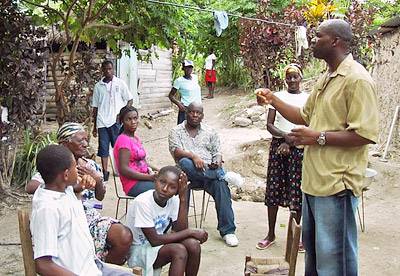 "Some people close their eyes to what's going on in front of them," Lajeunesse said of the poverty in his homeland. "But if God gave me the knowledge and the view to see these things, then I need to go back and help those people who cannot help themselves." (Image: Courtesy of Transcendental Media)

Helping his home in Haiti

Passionate yet unassuming, Lajeunesse drives a taxi until the early morning hours after finishing his duties at Princeton to support his five children, who now all live with him in New Jersey, and his extended family in Haiti. Even with his intense schedule, he finds time to help students in the dormitories where he works and has completed two human resources learning and development programs.

"Working at Princeton, you have opportunities to move up to another level and improve yourself economically and socially," he said. "Anyone who comes here to work, they take you in with two hands and arms open."

Through his hard work, Lajeunesse has been able to send money and supplies to bring purified water to his hometown of Lasource, where villagers once traveled to a nearby mountain for clean water.

"When I was a little boy, I asked my dad how can we do better and get clean water for our town," Lajeunesse said. "Since then, this idea has always been in my mind."

While in the military in Haiti, Lajeunesse said he was able to get the government to commit to bring water to his village, but the project never happened because of political unrest in the country. In addition to providing support to his family in Haiti since moving to the United States, Lajeunesse began sending funds to his brother in 2003 so the two could take on the water project themselves.

They have brought a clean water source closer to the village and are now raising money to build cisterns so that each house can have water all the time. The film shows Lajeunesse during a trip to Lasource in summer 2008 breaking down in tears as he speaks of the responsibilities that rest on his shoulders.

"Now where they have water, the town is green -- there is life," he said. "But the job is not finished."

His connection to Haiti is why Shen said he and Bennick selected Lajeunesse for the documentary. The filmmakers contacted the University about researching possible candidates for the film, and Lajeunesse was one of a handful of janitors recommended by Baer.

"In speaking with Josue we instantly knew we had a very compelling individual on our hand. When we went with him to Haiti, we were blown away by the poor living conditions there but also so impressed with his water project," said Shen, adding that the film is now helping raise money for the project through a partnership with the nonprofit organization Generosity Water.

Still striving to do more for his home, Lajeunesse is now seeking help from doctors in Haiti and New Jersey to create a health clinic in the remote area of Lasource. Lajeunesse said he also hopes to raise funds to buy computers for the local school and to build solar panels to power the machines because the village does not have electricity. 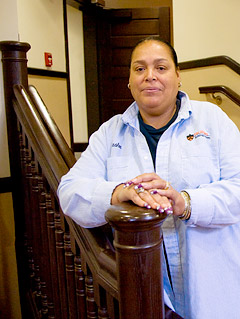 Natasha Bowman, who has worked at the University for 21 years, expects the student residents to treat the buildings with as much respect and care as she does. A janitor in Blair and Buyers halls, she has been a surrogate parent to some of the students living in the dorms. (Photo: Denise Applewhite)

Pride in her work

As a janitor in Blair and Buyers halls, Bowman expects the student residents to treat the buildings with as much respect and care as she does.

"If I come in to work and clean the building, when I come back the next day I expect that you have tried to keep it clean. I tell the kids that if they want a maid, they have to pay for a maid," Bowman said with a laugh. "I'm the same way at home with my family."

Bowman grew up in Lawrence Township with her seven sisters and a brother, and she has two daughters, three sons and six grandchildren. Princeton runs in her family, with one sister also working in Building Services and two other sisters working in Dining Services.

"Natasha is someone who tells it to you straight and will speak her mind," Baer said. "She possesses a wisdom about life that I think is needed in this world."

After cleaning academic buildings for a number of years, Bowman said she enjoys the relationships she's developed with students who live in the dorms.

"I have a lot of foreign students in my dorms, and I enjoy seeing the students from different backgrounds and nationalities," she said. "There also have been a few special kids who I've looked after while they were here."

Bowman recalled a particular student from the class of 2008 who she "got a feeling" about when seeing him around the building while she cleaned. The student admitted he was having trouble getting to an early morning class, so Bowman knocked on his door at 7 a.m. twice a week to make sure he woke up.

"I took a liking to him, and I told him 'Your parents sent you here to go to class, so I'm going to make sure you do,'" Bowman said.

She and the student remained friendly, and he included her name in the dedications for his senior thesis, according to Bowman.

As a fellow dormitory janitor, Bowman said she's known Lajeunesse for many years but had no idea about his work in Haiti until "The Philosopher Kings" movie.

"I'm really proud of Josue for what he's doing for his country," Bowman said. "The janitors that work in the dorms all know each other, but we don't sit down often and talk about our personal lives." 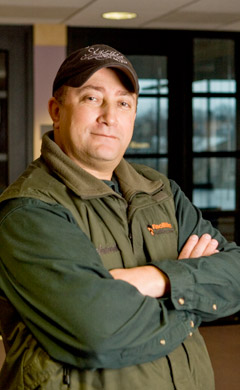 Mohamed Flites, an amateur photographer and historian who immigrated to the United States to escape civil war in Algeria, has been cleaning academic and administrative buildings for about seven years. "My friends, my family, the people I've met at Princeton, that's the best education for me," he said. "Being a janitor is just a title. It's what I get from my experiences every day that matters." (Photo: Brian Wilson)

Also an immigrant to the United States, Flites shares with Lajeunesse the experience of adjusting to life in a new country on his own. He's worked at the University for about seven years, cleaning academic and administrative buildings from 4 p.m. to midnight.

"We try to create the best working environment for the people who work and study in the buildings," Flites said. "The way I look at it, we all want Princeton to be the best university. If we as janitors can contribute a little bit, I think that's great."

Flites was pursuing his master's degree in literature in Algeria when civil war jettisoned his studies. After leaving the country in 1996, he worked as a building supervisor and mechanic in Philadelphia and also met his wife, who is a teacher and native of New Jersey.

Whether it's traveling to U.S. Civil War battlefields or listening to books on tape while he cleans, Flites is constantly soaking up knowledge.

"I would consider Mohamed an expert on the Civil War. He is always teaching me new things," Baer said.

On campus, Flites said he usually keeps a small camera in his pocket to document the inspiring architecture and scenery or the interesting people he meets.

Although it was once his dream, Flites said he is no longer interested in finishing his graduate degree.

"My friends, my family, the people I've met at Princeton, that's the best education for me," he said. "Being a janitor is just a title. It's what I get from my experiences every day that matters."