Converting a standard shipping container into a sustainable source of energy for remote or disaster-torn regions, a team of Princeton University students took top honors in an 18-month national competition that culminated April 21 and 22 on the Washington, D.C., Mall.

The students, working through a course called "Engineering Projects in Community Service" (EPICS), won a $90,000 grant from the U.S. Environmental Protection Agency to further develop and implement their project. The students' submission, which was hauled from Princeton to Washington on a flatbed truck, involved a series of solar panels as well as a 40-foot-tall wind turbine that telescopes out of the container. Dubbed by the students "Power in a Box," it is designed to replace diesel-powered generators in areas cut off from other power sources.

The competition, called "P3: People, Prosperity and the Planet Student Design Competition for Sustainability," began with 165 teams in the fall of 2010. The students enrolled in EPICS at the time worked through the semester and submitted a design concept to the EPA in December of that year. The team, along with 44 others from around the country, advanced to a second round in which they were awarded $15,000 to develop their concept. After a year of further work, that round culminated in the competition in Washington where 15 teams were awarded the highest prize.

"This was a very ambitious project," said Catherine Peters, professor of civil and environmental engineering and adviser to the EPICS team. One factor in their success, Peters said, was the multidisciplinary nature of the group, which was evenly divided between engineers and students from other areas of the University, including history, art history, sociology and the Woodrow Wilson School of Public and International Affairs.

"I was impressed how they worked together and how each brought unique and valuable skills," Peters said. 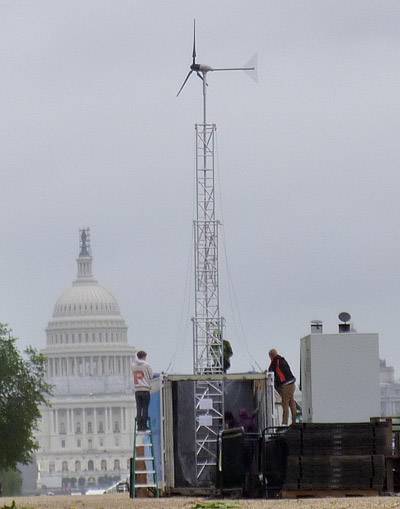 A team of Princeton undergraduates set up their "Power in a Box" invention on the Washington, D.C., Mall on the second day of a competition sponsored by the U.S. Environmental Protection Agency. The students took top honors for their project, which combines solar panels and a collapsible wind turbine in a standard shipping container. (Photo by Catherine Peters)

EPICS, a course instituted by the University's Keller Center in 2006, engages students of all class years and majors in projects aimed at helping local and global communities. Students receive a half credit per semester and typically enroll for one to three semesters, so about 20 students have been involved since the start of the project. Nine made the trip to Washington for the final competition.

"A lot of us on the team feel very passionate about sustainability," said Alex Landon, a senior majoring in mechanical and aerospace engineering who joined EPICS in her junior year. "This was a chance for under- and upperclassmen to work really closely with professors and apply what we're learning in the classroom to something that will have a real impact."

The inspiration for the project came after the earthquakes that devastated Haiti in January 2010 and left many people in need of electrical power and water. Jane Harrison, a former faculty member of the School of Architecture, joined with Peters and other engineering faculty to draw up initial designs for power and water sources that could be transported in standard shipping containers, the 20-foot-long steel boxes that fit on trucks, trains and ships. The group received initial funding from the National Science Foundation to develop the concepts. 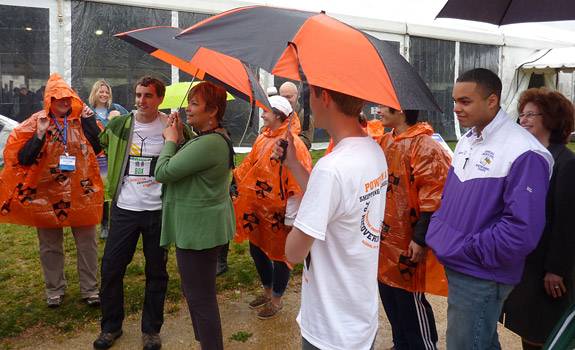 The students present their project to EPA Administrator Lisa Jackson ((in green) and to Gail Bentkover (far right), director of the EPA's Technology and Engineering Division, both Princeton alumni. Wesley Verne (at Jackson's right), a junior majoring in computer science, describes the project. (Photo by Catherine Peters)

In the fall of 2010, Peters and Elie Bou-Zeid, assistant professor of civil and environmental engineering, focused on the power-generation aspect of the designs and established the EPICS team to work on further developing and implementing the idea. The project attracted additional funding from the Princeton Institute for International and Regional Studies and Princeton's Siebel Energy Grand Challenges internship program. The students also partnered with Princeton Power Systems, a company founded by Princeton engineering alumni. The company let the team use space at its Lawrenceville, N.J., facility to work on the project and provided some expertise on the details of storing and converting the power for practical use.

"We could have used them more, but the students did it by and large themselves, very independently," Bou-Zeid said.

In recent months, the project came down to two critical pieces: developing a new proposal to submit to the EPA describing how the team would use the $90,000 if it won, and actually building the telescoping tower and wind turbine according to their meticulously calculated plans.

For the proposal, freshman Ryan Fauber drew on his experience as a participant in Princeton's Bridge Year Program, which placed him for a year in Ghana and, in turn, led him to an internship with Princeton in Africa. Through those affiliations, he connected the EPICS team with access:energy, a business that is bringing low-cost energy solutions to rural Kenya. The proposal calls for the EPICS team to build a more powerful version of its system and work with access:energy to bring it from village to village demonstrating how Power in a Box could be replicated with local materials.

Wesley Verne, a junior majoring in computer science, said that as he helped model the economic viability of the system he was struck by the tremendous cost savings and environmental benefits compared with diesel generators. "In Haiti or Kenya, it would pay for itself in less than a year," he said. 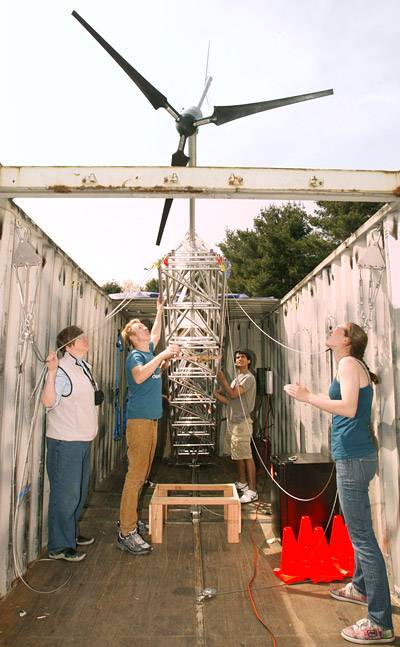 Before heading to Washington, the students practice setting up the wind turbine at their working space at the headquarters of Princeton Power Systems in Lawrenceville, N.J. Catherine Peters (at left), professor of civil and environmental engineering, watches as students (from left) Angelo Campus, Satyajeet Pal and Emily Moder raise the turbine. (Photo by Frank Wojciechowski)

When it came to actually building the machinery, Larry McIntyre in the engineering school's machine shop put the students in touch with two local expert welders, Jack Mershon and Jason Beskos, who built the components for the telescoping tower, the hand-operated crank and other mechanisms.

The group then had just a couple of weeks to test the device and become proficient at raising and lowering the wind turbine. In Washington, the planning and practice paid off. On the first day of the competition, the weather was sunny and still, so the solar panels were the prime source of power. The next day the weather turned windy and rainy, forcing the other competitors inside and raising doubts among some observers that the Princeton team members could raise their tower, Peters said.

"They were able to put it up with ease and I think that really impressed the judges," Peters said. "It was a testament to their design." In the end, the varied weather showed off the project perfectly because it was able to generate power both days.

The students also flourished under questioning by the panel of judges, a mix of experts from government, industry and academics. "They really grilled the students," Peters said.

Verne attributed that piece of the success to the team's ability to tap the varied backgrounds of the members in addressing the technical, logistical, economic and social dimensions of the project. "The judges would ask us questions they thought were tough, but because we really thought out all the aspects of the project we never failed to come up with a good answer," he said.

In Washington, the students also had the opportunity to demonstrate their project for EPA Administrator Lisa Jackson, who earned a master's degree in chemical engineering from Princeton in 1986.

The team's work now turns to building a more powerful version of the equipment, capable of generating one to two kilowatts of power, and planning for its tour in Africa. The project also has changed the course of the students themselves. Fauber said the project inspired him to pursue the University's Program in Sustainable Energy and ultimately combine his interests in international development and sustainable energy.

Landon, who graduates in June, will work for Houston-based Clean Line Energy, which develops transmission lines for connecting cities with renewable energy sources, where she interned last summer. She attributes her success in landing those positions with the hands-on experience of the EPICS course. "A lot of people want to work in that industry," she said. "It is important to demonstrate you have the knowledge and experience actually doing the work."