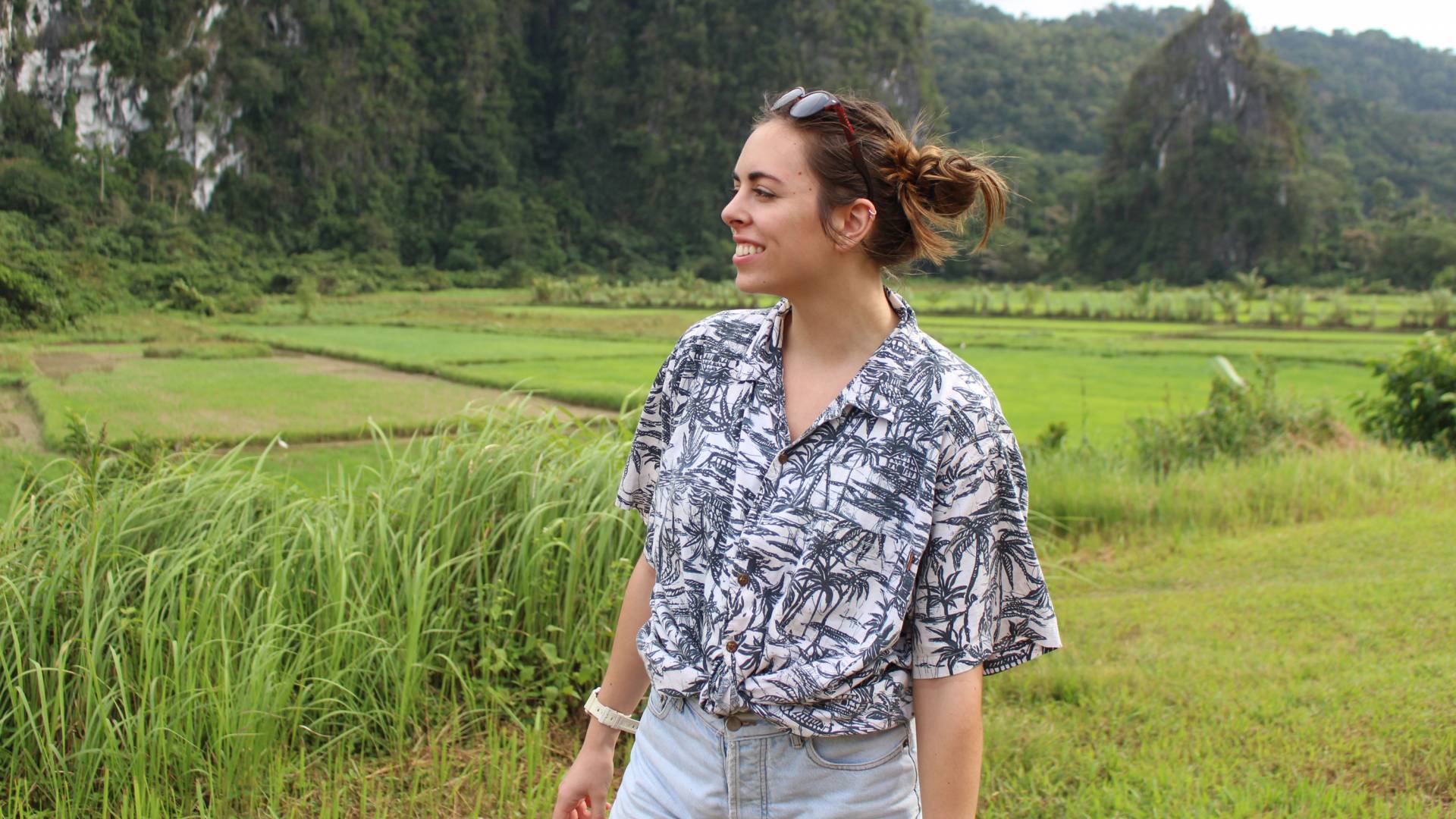 Erin Redding focused her senior thesis on identifying the main barriers to establishing renewable solar power in the Philippines and developed recommendations to help ensure that those systems are successful. Redding received her bachelor’s degree from the Woodrow Wilson School of Public and International Affairs and a certificate in environmental studies June 4.

As a tropical nation spread across more than 7,600 islands, the Philippines seems like the ideal location to implement localized solar power for the 16 million Filipinos lacking reliable access to electricity. But as Princeton senior Erin Redding discovered, providing lasting energy solutions requires much more than a willing populace, low-cost technology and ample sunshine.

“Because the Philippines has the right climate and an acute need for electricity in rural areas, solar power does seem ideal,” said Redding, who graduated from Princeton on June 4 with a degree from the Woodrow Wilson School of Public and International Affairs and a certificate in environmental studies. “But in my eyes, nearly every NGO [non-government organization] project to establish a distributed solar infrastructure has failed. For the amount of money these NGOs are pouring in, they’re really not having much of a lasting impact.”

For her senior thesis research, Redding identified the main barriers to establishing renewable solar power in the Philippines — particularly in remote rural areas — and developed recommendations for the Philippine government to help ensure that those systems are successful. With support from the Princeton Environmental Institute (PEI) and the Woodrow Wilson School, Redding spent three weeks in the Philippines in January interviewing 31 high-level officials in energy departments and bureaus, project managers for nonprofit solarization programs, and directors of solar social enterprises. 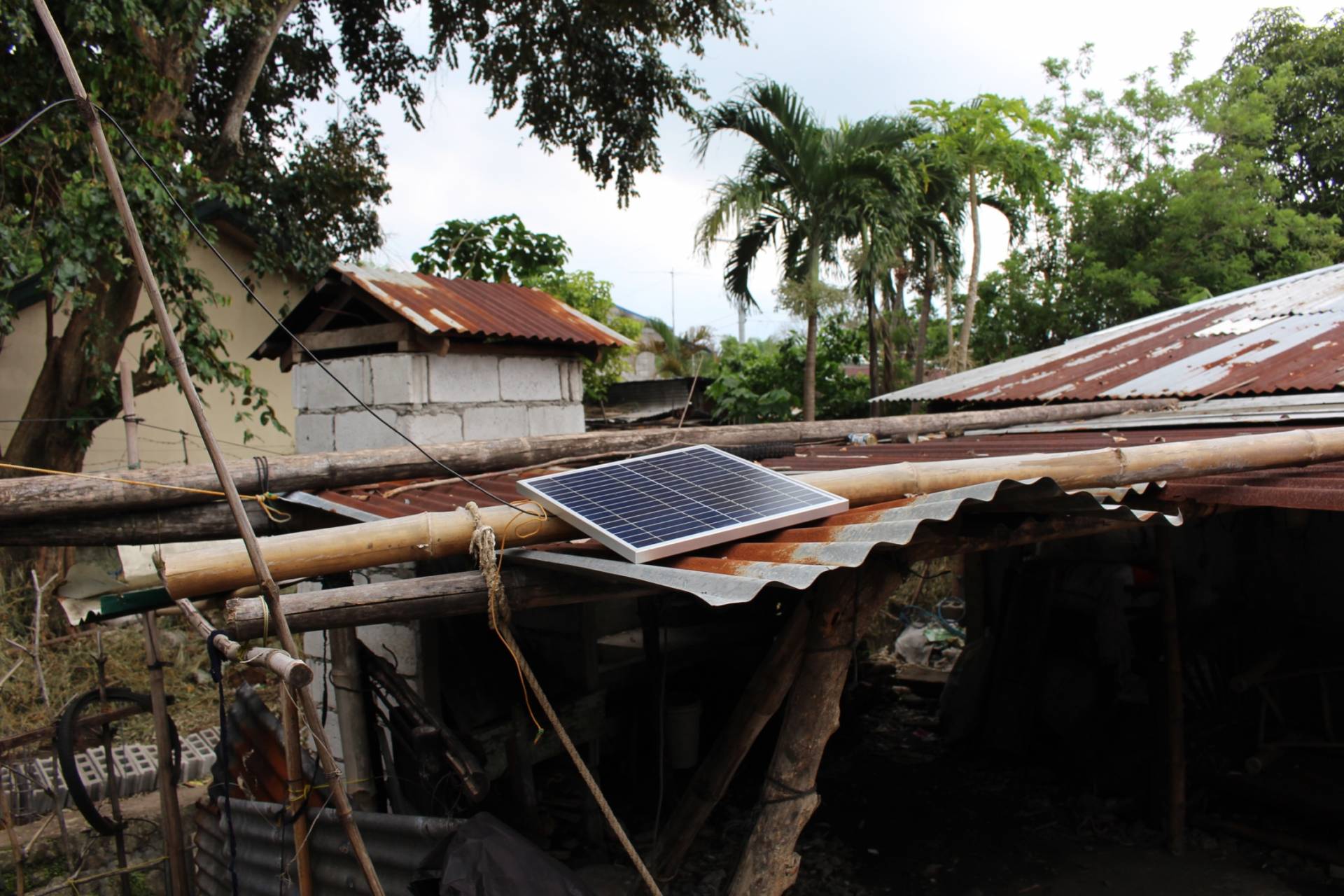 A 6-watt solar panel on a home on Talim Island, Luzon, was used to charge cellphones and household lights. Distributed solar panels are a promising energy solution for the Philippines, a tropical nation spread across more than 7,600 islands. Yet, efforts to electrify the country’s rural areas have been hindered by the cost of implementation, a lack of maintenance, and a disconnect between the technology’s intended and actual use.

The Philippines exemplify the dilemma modernizing nations face in the era of climate change. In 2015, the Global Climate Risk Index listed the nation as the most affected by climate change. In the meantime, the Philippine government has set a goal to totally electrify the country by 2022 (pushed back from 2020).

With the Philippines’ many islands making a central grid untenable, solar power is the most environmentally and logistically sound option. Yet, despite $100 million in electrification projects and tens of thousands of solar panels distributed, nearly 15% of the population gets light from kerosene and candles.

Redding’s thesis is one of the first reports intended to help solar-power NGOs, government programs and solar social enterprises operate more effectively in the Philippines. She found that while nonprofit organizations are successful at delivering solar technology to far-flung communities, neither they nor the government have the capital for maintenance. Organizations already face substantial costs due to travel, logistics and technology, as well as corruption, which accounts for a 30-40% markup, Redding said.

“Smaller NGO and government projects often lack the foresight and budget to plan ahead for operation and maintenance, so project implementers often install the power system and leave,” Redding said. “When breakdowns in the system occur, no one can fix it.” 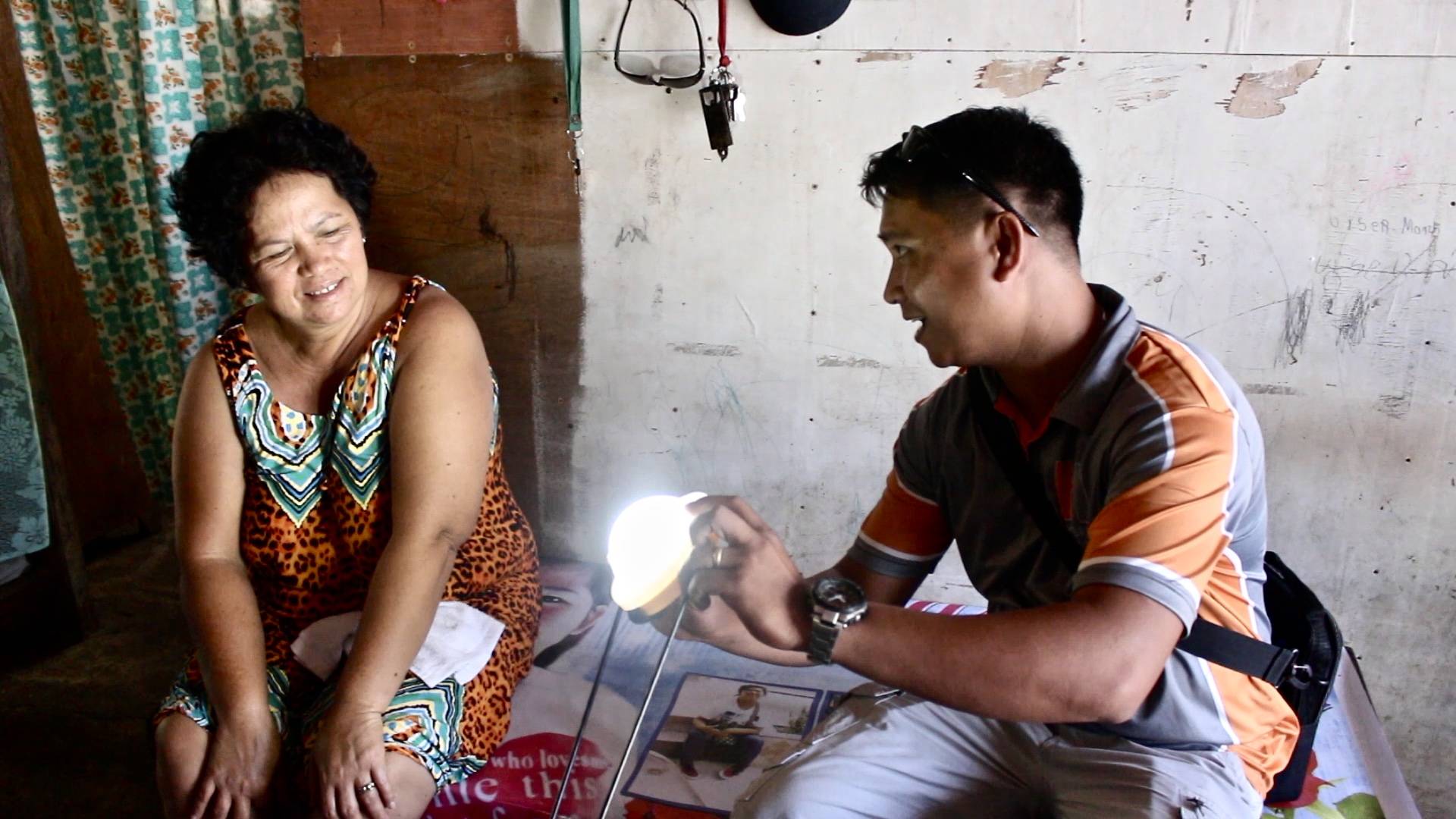 Redding’s initial ideas about what became her thesis topic emerged through a 2018 Princeton International Internship with the Philippines-based solar social enterprise Hybrid Social Solutions Inc. She traveled to various islands and villages to document interviews the organization’s employees conducted with community members on the benefits of rural electrification.

Despite the government’s courting of the private sector, for-profit energy has been slow to embrace the challenge of powering the rural areas of the Philippines, Redding said. “It’s a risky business in the Philippines right now — there’s not much of a profit to be made selling electricity to the poor and there are no existing government policies to support the use of small-scale solar,” she said.

The difficulty of maintaining these power systems has resulted in people coming to distrust solar technology, Redding found. People in the communities where systems are installed rarely have the expertise to maintain solar technology, so systems often are unused. “You simply can't expect people living in the most remote regions of the Philippines to know how to operate an entire electric utility after only basic training," Redding said.

In her thesis, Redding suggests that NGOs pursue more effective means of ensuring maintenance, as well as better understand the technology that communities are able to afford and operate. In addition, she suggests that power systems adapt to local needs, not the other way around.

Distributed power systems such as solar panels and microgrids are increasingly being adopted by social enterprises that seek to help improve the living and financial conditions in developing regions, said 2001 Princeton alumnus Darren Hammell, Redding’s thesis adviser and a visiting professional specialist and lecturer in the Andlinger Center for Energy and the Environment. Yet, this avenue of delivering solar energy to poor and rural communities is not very well understood, he said.

“With the costs of solar and microgrid technology coming down rapidly, I would expect that social enterprises focused on solar deployment in developing areas will play a larger role in current and future policy decisions,” said Hammell, who has significant experience in the field of distributed solar in the developing world.

“It will be important for policymakers to better understand the role that these organizations might play and Erin’s paper can help with that,” he said. “Similarly, her paper shows how the effective deployment of distributed solar can be used to displace diesel generation so that it could become the most cost-effective and rapid way of electrifying rural areas. And, of course, more sustainable as well.” 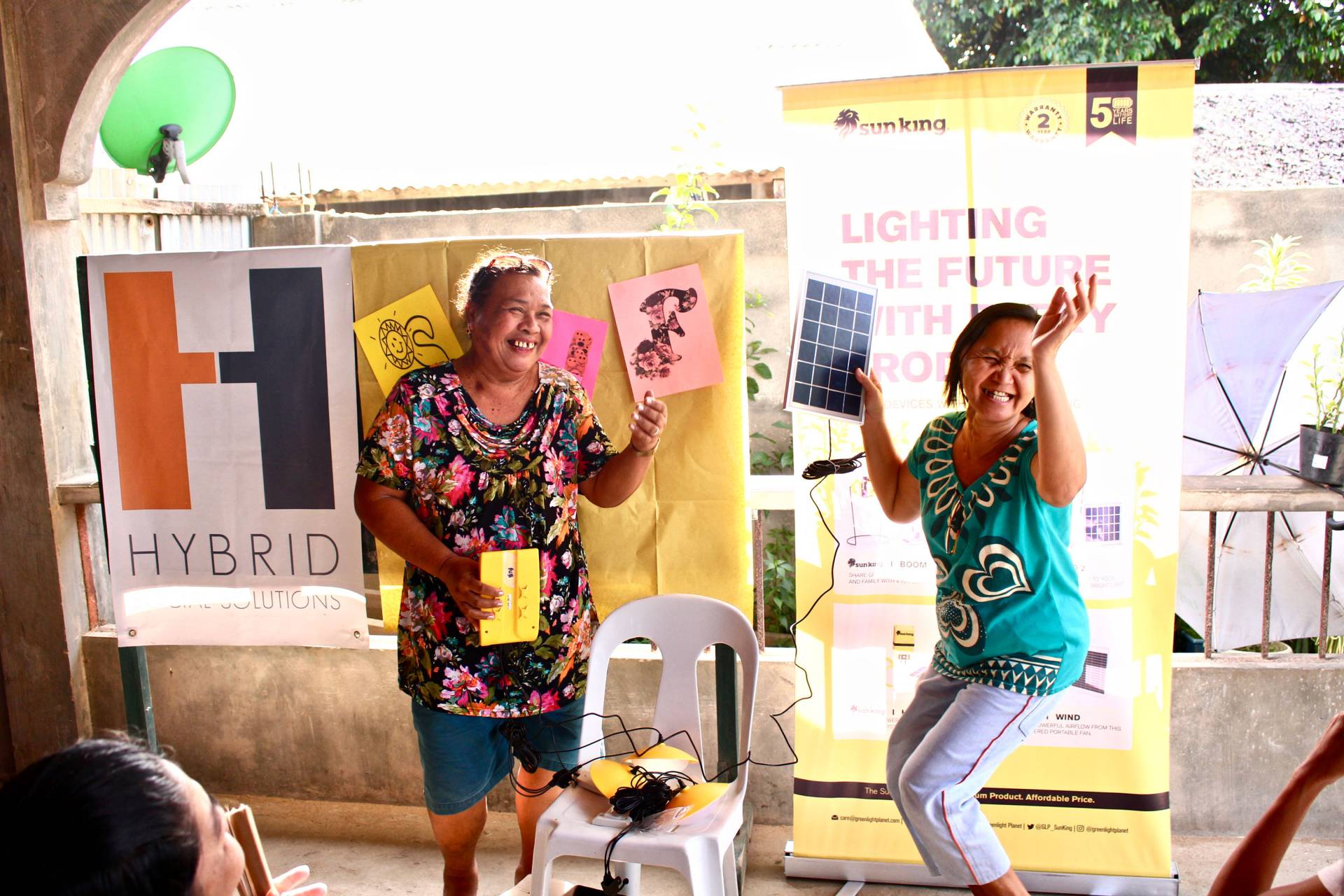 Two community solar-power users in Baler, Luzon, demonstrate how to correctly use a solar panel and battery system at a “solar meetup” organized by Hybrid Social Solutions.

While working on her thesis in the Philippines, Redding “demonstrated a personal passion and motivation to thoroughly understand and help resolve energy-access issues in the developing world,” Hammell said.

After graduation, Redding is working on developing energy microgrids in Puerto Rico as a High Meadows Fellow with the Environmental Defense Fund. She hopes her senior thesis work will help build upon the improvements in solar power outreach in the Philippines she saw during her research.

“The mindset has recently shifted from a donation-based approach to more comprehensive programming that includes both government actors and solar end-users,” Redding said. “I’ve seen a shift in the NGOs and international donors in that they really want to have a sustainable, lasting impact, which is hopeful. There still needs to be higher standards, but also better enforcement of those standards.”

Redding gained familiarity with her thesis topic in summer 2018 through the Princeton International Internship Program. She spent 11 weeks in the Philippines with Hybrid Social Solutions, a solar social enterprise started by Jim Ayala of Princeton’s Class of 1984, traveling to islands and villages separated from populated areas by several hours in a boat. She filmed and photographed interviews — conducted in Tagalog or local languages — on the benefits of rural electrification.

“Knowing that my research might contribute to the literature of how we can end energy poverty there is encouraging in itself,” Redding said.