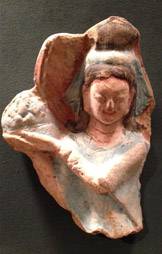 Princeton scholars are playing a key role in an international effort to learn about the Mogao Caves near Dunhuang, China, and the story they tell of art and Buddhism. Apsaras (celestial beings) such as this fragment adorned interiors of the caves. ("Apsara holding a lotus blossom, 700–750." Terracotta with pigment. Princeton University Art Museum, Museum Purchase, Fowler McCormick, Class of 1921, Fund, y1986-109.)

The Mogao Caves in the desert of northwest China tell a story of art and Buddhism that began more than 1,500 years ago. Today, Princeton scholars are playing a key role as part of an international effort to understand this story, which unfolds at the heart of the ancient trade route known as the Silk Road.

The nearly 500 caves collectively called the Mogao Caves — a UNESCO World Heritage site — are carved into cliffs about 15 miles from the oasis town of Dunhuang in Gansu province. At the start of the 20th century the caves were discovered, and over time they revealed a treasure trove of sculptures, manuscripts, painted scrolls and wall paintings ranging in date from the 4th to the 14th centuries. The cave temples preserve about 2,000 Buddhist sculptures, 45,000 square meters of murals and more than 60,000 texts.

In collaboration with the Dunhuang Academy in China, Princeton students and faculty are exploring the significance of the site in history through researching, archiving and sharing information about the caves and their contents. Their work is important to conservation efforts to help preserve the caves and to fill the gaps in knowledge of what has been lost over time, deepening the understanding of Buddhist studies and art history.

With the images below, Stephen F. Teiser, the D.T. Suzuki Professor in Buddhist Studies, and Dora C. Y. Ching, associate director of the Tang Center for East Asian Art, describe the cultural significance of the caves and their contents, and Princeton's connection to this work. 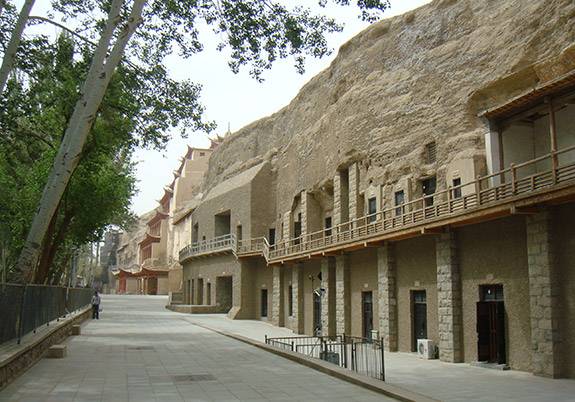 This year marked the 70th anniversary of the founding of the Dunhuang Academy, which has been responsible for conducting research, preserving, conserving and protecting the Mogao Caves. This view from May 2014 shows the current façade with gated doors leading into the caves as well as walkways between caves. (Photo by Cary Y. Liu, Princeton University Art Museum)

Teiser has been engaged in research at Dunhuang since the late 1980s. "It is probably the most important art historical site in China," Teiser said. "Anyone who studies a smidgeon of Chinese art wants to go there."

The "broader rubric" is learning more about the Silk Road, Teiser said, notably the cultural interchange between East and West and the development of Buddhism and Buddhist art among people who traded goods such as silk, precious metals and jewels.

To support this research, the Henry Luce Foundation is providing funding over four years to the "Dunhuang Art and Manuscripts" project administered by the Tang Center for East Asian Art, directed by Jerome Silbergeld, the P.Y. and Kinmay W. Tang Professor in Chinese Art, and the Buddhist Studies Workshop, which Teiser oversees.

A major focus of the arts component of the project is the Lo Archive of photographs taken of the caves in 1943-44. Archived in the Department of Art and Archaeology, the 2,500 black-and-white photos were taken by James and Lucy Lo using natural light, with negatives developed on site.

"Our project is to organize these photos, put them in chronological order cave by cave, and research their significance," said Ching. "The photo archive is an important resource for conservation and the study of Buddhist art because it preserves views of paintings and sculptures that have changed drastically or no longer exist." 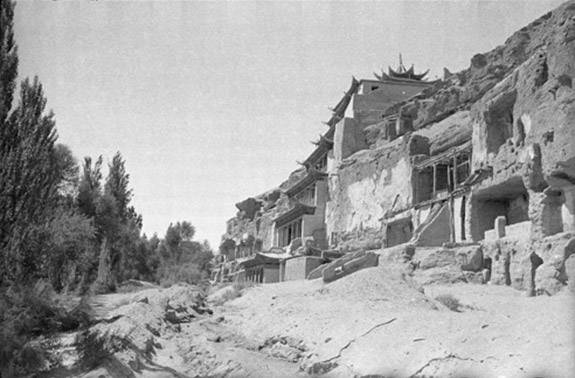 James and Lucy Lo traveled to Dunhuang in 1943 and spent 18 months systematically photographing the exteriors and interiors of the caves. They produced an unparalleled set of black-and-white negatives, remarkable for their documentary value as well as their artistic quality. This photograph shows the site just as the Dunhuang Academy was being founded. The exterior walls of many of the cave temples had collapsed, exposing the cave interiors with their wall paintings and stucco statues to the elements. (View of the Mogao Caves circa 1943–44. Photo © Lo Archive)

Ching and other researchers conducted a geographical survey of the caves last May, work that will help inform an international conference and a Princeton University Art Museum display of Dunhuang art to be held on campus next fall.

For the manuscripts part of the project, Teiser said that studying the scrolls from the caves allows scholars of Buddhist studies to make connections across languages, spanning Chinese, Tibetan, Sanskrit, Uighur and Tangut.

"The study of Buddhism is usually circumscribed by language," Teiser said. "Buddhist studies scholars are fenced in because we deal with different language groups. Our project attempts to transcend these divisions by bringing everyone together to ask common questions. It's not simply a matter of did the translators get the words right. We also want to discuss: Where were Buddhist manuscripts housed? Who copied them? Why did people draw doodles on manuscripts? Through reproducing sacred texts, who was learning to read and write?"

Such questions were asked this past September when the Buddhist Studies Workshop held the international conference, "Prospects for the Study of Dunhuang Manuscripts: The Next Twenty Years," at Princeton. More than 140 people attended this bilingual conference, at which 30 papers were presented during three days. With more than 100 manuscripts from Dunhuang in the East Asian Library and Gest Collection housed at Mudd Library, Teiser said experts from around the world as well as Princeton students have unparalleled access to these important documents. 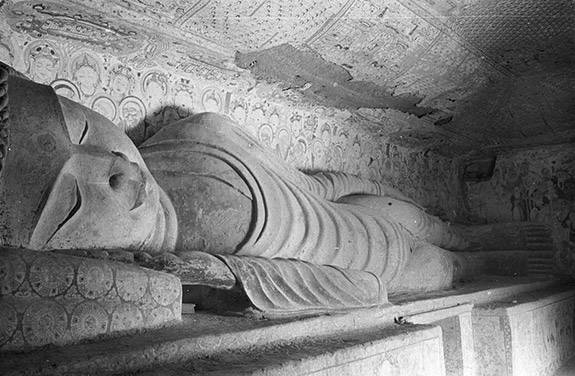 In this black-and-white photograph from Cave 158, James Lo artfully photographed the reclining Buddha in nirvana from an unusual angle that emphasizes the curvilinear modeling of the Buddha's face and drapery. Most other photographers chose to present a view of the Buddha taken from his feet looking toward his head. By selecting a different vantage point, Lo was able to capture the serene expression of the Buddha in a highly immediate, almost intimate manner, even though the Buddha measures 50 feet in length. (Cave 158: Nirvana Cave, Tibetan period, mid-Tang (781-848). Photo © Lo Archive, 1943–44.) 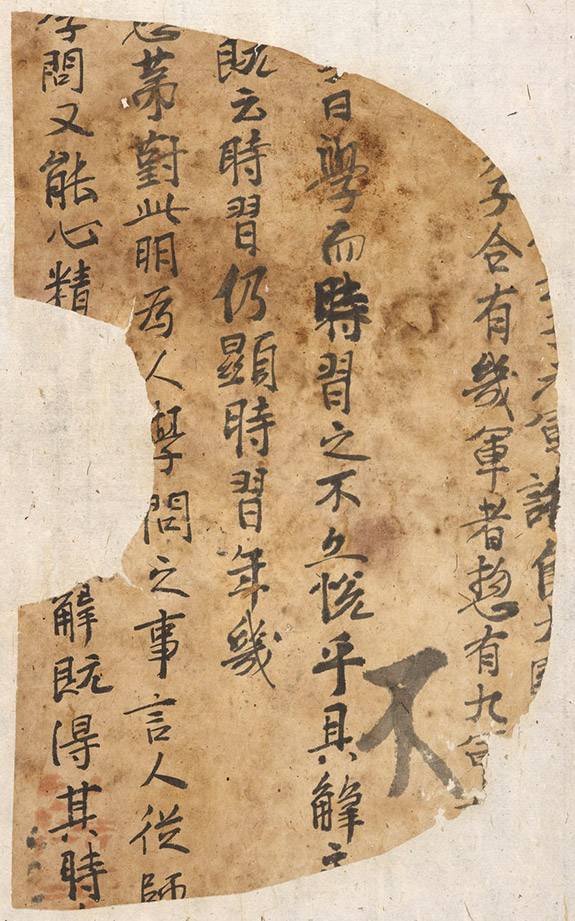 This paper from one of the caves was originally in rectangular form containing essays, probably used in a school in Dunhuang (Gansu province) or Turfan (Xinjiang province) in northwest China. The first two vertical lines of writing on the right side are about the "Spring and Autumn Annals," while the remaining four lines on the left concern the "Analects" of Confucius. A teacher has added his evaluation ("No") in one large word, written in much thicker brushstrokes, after the second line. Sometime after serving an instructional purpose, the paper was recycled and used to make the upper for a ceremonial shoe (for burial of a corpse), hence its distinctive shape and punctures around the outer curved edge. The manuscript shows how precious a resource paper was in the 8th-10th centuries and sheds light on educational practices in local schools of the Chinese empire. (Princeton East Asian Library Dunhuang and Turfan Collection, manuscript # PEALD 7p. © The East Asian Library and the Gest Collection, Princeton University) 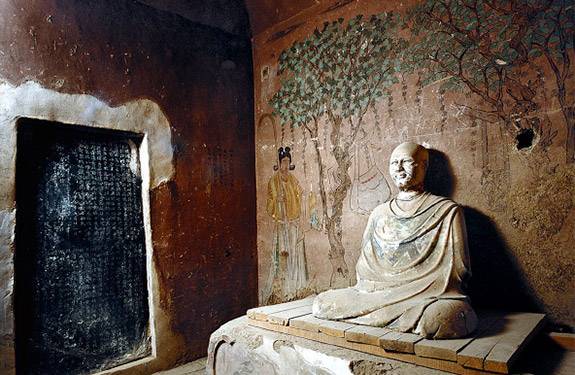 This photo is of Mogao Cave 17 as it probably looked before texts and paintings were deposited inside and sealed up in the 11th century. This one-room cave-temple was originally designed in the 9th century to memorialize the monk depicted in the statue, Hongbian, who died in the year 862. The son of a prominent family, Hongbian was the area's highest-ranking monastic official. His life-size statue, which originally contained his ashes, sits in meditation. A wall painting behind the statue provides the setting, while his deeds are discussed in the memorial stele on the left. (Photo courtesy of Dunhuang Academy) 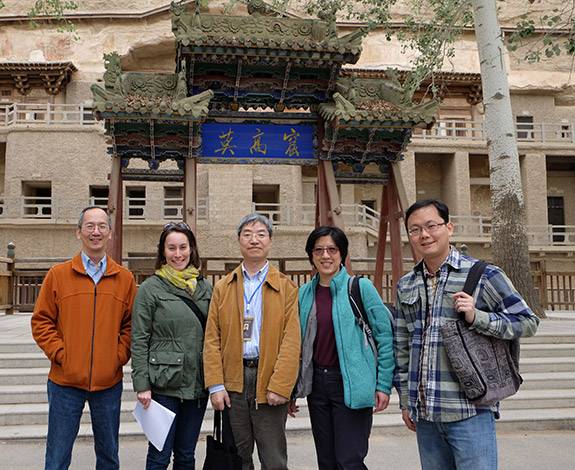 A research team consisting, from left to right, of Cary Liu and Zoe Kwok of the Princeton University Art Museum, Zhao Shengliang of the Dunhuang Academy, Dora Ching of the Tang Center for East Asian Art, and Jun Hu (then Ph.D. candidate, now assistant professor at Northwestern University) gathers in front of the Mogao Caves in May 2014. The team enjoyed access to many rare caves and performed an extensive review and verification of research findings, especially the chronology and descriptions of the caves. The team also made site inspections of the surrounding area, especially nearby Mount Sanwei, the original sacred site in the area. (Photo by Zhang Yanmei, Dunhuang Academy) 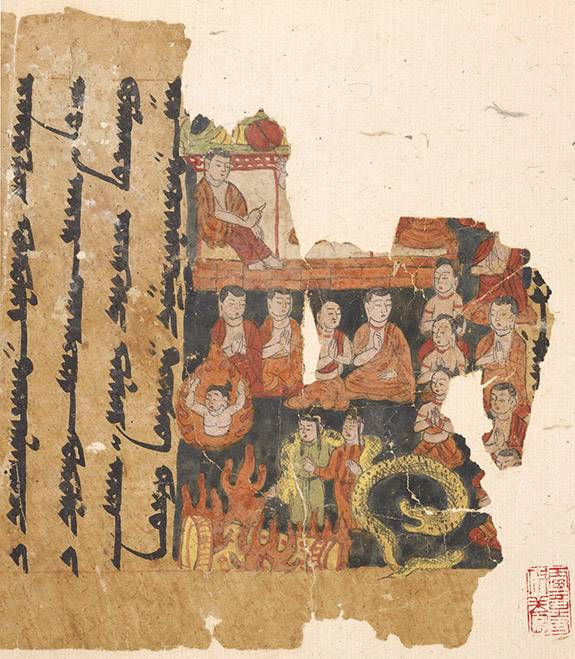 The text of this manuscript on karmic retribution contains dialogues illustrating the consequences in the next life of performing various deeds in this life. It is written in Old Uighur (or Old Turkish). The illustration depicts monks in prayer, a couple encircled by a serpent and a sinner in flames. (Princeton East Asian Library Dunhuang and Turfan Collection, manuscript # PEALD 6r. © The East Asian Library and the Gest Collection, Princeton University) 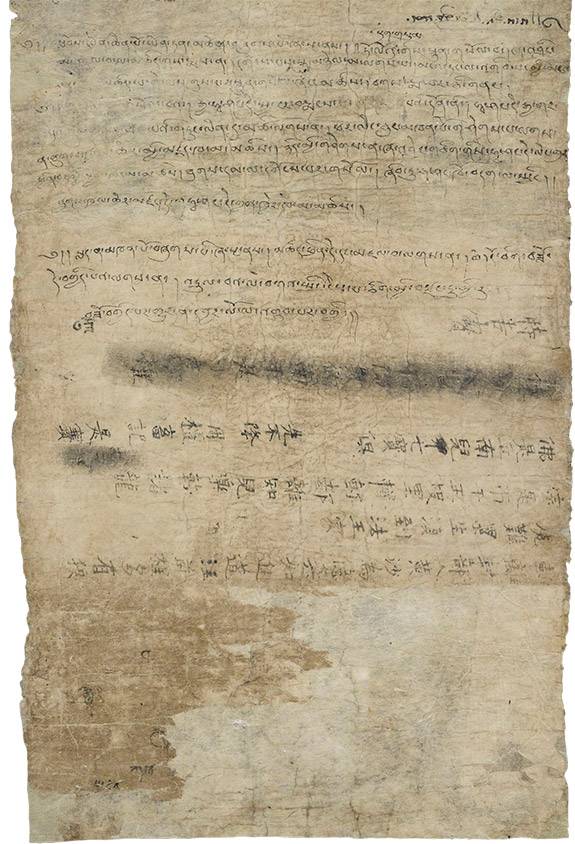 This bilingual Tibetan and Chinese manuscript includes letters of introduction for a pilgrimage (British Library IOL Tib J 754). A Chinese monk carried this manuscript on a pilgrimage in the 10th century through Tibetan-held areas of modern Gansu and Qinghai provinces as he made his way from Mount Wutai in China to Buddhist holy places in India. In addition to letters in Tibetan requesting safe passage, the manuscript also contains Chinese legends about various sacred sites in China. (Photo courtesy of International Dunhuang Project) 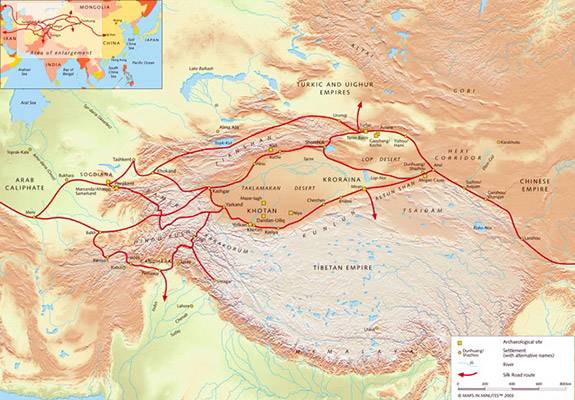 This topographical map shows some of the linkages between the various empires of the medieval period, including China in the East, the Turkic and Uighur empires in the north, the Tibetan empire on the Himalayan plateau, and the Arab Caliphate in the west. Traders and armies heading west across the Tarim Basin and Taklamakan Desert would stop in Dunhuang (and the nearby Mogao Caves) as the last town under Chinese control. Moving in the other direction, caravans traversing any of the central Asian routes known under the modern term "Silk Road" would have passed through Dunhuang on their way into China. (Map courtesy of International Dunhuang Project)