The head coaching position for Princeton's men's squash team will be named for Class of 1977 alumnus Bob Callahan, who was inducted into the U.S. Squash Hall of Fame in 2012 for his contributions to the game as a Princeton player and as the University's men's squash coach for 32 years.

The Robert W. Callahan '77 Head Coach of Men's Squash position will be established by a group of Princeton squash alumni and friends whose positive interactions with Callahan have prompted them to honor his legacy.

"This tribute will forever weave Bob's name into Princeton's history in an extraordinarily meaningful way," said President Christopher L. Eisgruber. "Our alumni are thrilled to be able to demonstrate their gratitude, affection and friendship for Bob's marvelous mentorship by honoring him with this gift." 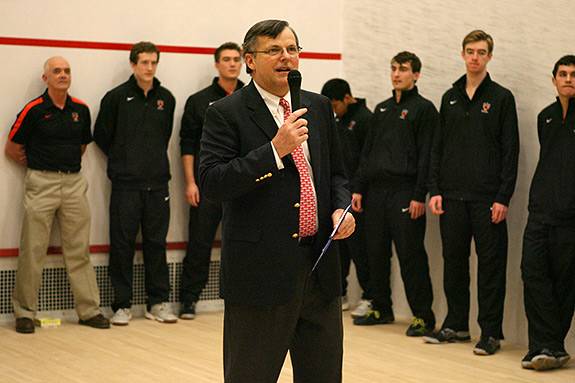 Bob Callahan speaks on a microphone prior to a match between the Princeton men's squash team and Harvard on Jan. 13, 2013. Callahan coached the men's team for more than three decades. (Photo by Beverly Schaefer)

As an undergraduate, Callahan played on three national title teams, including his senior year when he captained the Tigers to an undefeated season in 1976-77. After becoming coach in 1981, he led Princeton to 314 victories, 11 Ivy League titles, and national championships in 1982, 1993 and 2012. He coached the individual national champion 10 times, including the 2011 championship by Todd Harrity, the 2013 Ivy League Co-Player of the Year. Princeton also won the 1988 National Six Man team championship. In addition, Callahan founded the nation's first major squash camp in 1982 and ran it until his retirement in 2013.

"Bob is a shining example of our value system," said Ford Family Director of Athletics Mollie Marcoux, Class of 1991. "Bob personified our goals as a coach. He won, and he won with the highest integrity and with an extraordinary commitment to providing the best possible student-athlete experience."

"The many lessons I have learned and continue to learn from Coach Callahan are not restricted to the game of squash, but encompass all aspects of life," Yasser El Halaby said at the time of Callahan's induction into the Hall of Fame. El Halaby, Class of 2006, was the first male player to win all four individual championships (2003-06) and helped Princeton to win two Ivy League titles.

Current coach Sean Wilkinson will be the first Callahan Head Coach. "Bob inspired generations of Princeton student-athletes, and continues to do so every day," he said. "I am grateful to be associated with his legacy. We will continue to work hard to achieve the high standards of sportsmanship and success that are synonymous with Bob's teams."