Gary D. Walters, the Ford Family Director of Athletics under whose leadership Princeton University student-athletes have won 214 Ivy League championships and 48 national team or individual titles since 1994, will step down at the end of June.

Walters, who was a standout basketball player for the Tigers as an undergraduate member of the Class of 1967, informed members of the Department of Athletics staff of his decision today.

"I did my best to ensure that our coaches, players and administrators did things right and did the right thing," Walters said. "I am most proud of the integrity associated with our department's commitment to Education Through Athletics as we have pursued excellence with a heart and with a soul." 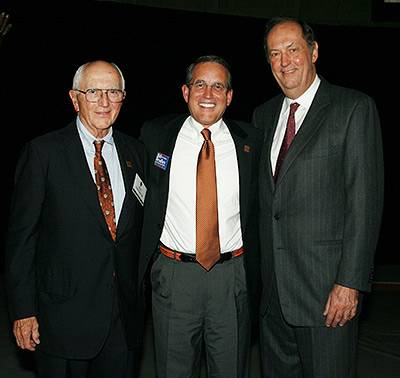 Gary Walters poses for a photo in 2008 with Dick Kazmaier (left), a Princeton football great who died Aug. 1, and Bill Bradley (right), with whom Walters played on the Princeton basketball squad that reached the NCAA Final Four in 1965. (Photo by Beverly Schaefer, Department of Athletics)

During his tenure as athletic director, Walters has presided over widespread athletic success in the large number of men's and women's programs that Princeton offers at the varsity and club-sport levels. He has overseen the renovation or replacement of most of the University's athletic facilities and been prominent in national collegiate athletics, including serving a five-year term on the NCAA Division I men's basketball committee.

"Gary Walters has made Princeton's athletic program a model for the nation," Princeton President Christopher L. Eisgruber said. "His leadership has produced not only sustained competitive excellence, but, more importantly, a program that cares first and foremost about the education and character of the students who participate in it. At a time when many colleges have cynically abandoned the ideal of the scholar-athlete, Gary has upheld it with unstinting passion and energy."

Said Cynthia Cherrey, vice president for campus life: "Beyond the numerous national championships, Ivy League titles, coaching accolades, student-athlete awards, and new facilities that flourished under his leadership, Gary's most enduring legacy will be his commitment, both on campus and off, to 'Education through Athletics.' That philosophy aims for both academic and athletic achievement for each student athlete and emphasizes character-based coaching."

During every year of Walters' tenure, Princeton has won at least one individual or team national title, as well as winning the unofficial Ivy League all-sports championship. Even more Ivy League championships presumably will come as he enters his 20th year on the job. In 2011, the Director of Athletics position was named by a gift from William Clay Ford Jr., a member of the Class of 1979, and Lisa Vanderzee Ford of the Class of 1982.

Walters has been known for the professional development of his coaches and administrators. For example, 17 coaches he hired without previous Division I coaching experience have gone on to win Ivy League or national championships. Seven members of his administrative staff have become athletic directors or Division I conference commissioners.

Walters also is credited for overseeing wide-ranging upgrades of the University's sports facilities, including the construction of Princeton Stadium and Weaver Track and Field as well as several other projects. They have included the Roberts Stadium soccer complex, new squash courts at Jadwin Gymnasium, new rugby fields, a new field hockey field, renovation and enhancement of Lenz Tennis Center, renovation and expansion of the Shea Rowing Center and improvements to Baker Rink and DeNunzio Pool.

Two of Walters' hallmark initiatives include the creation of the Princeton Varsity Club, which provides broad-based support for the University's 38 intercollegiate teams, and the launch of the Princeton Academic-Athletic Fellows program, through which faculty and administrators provide support to each team.

Under Walters, recreation programs including intramural and club sports have also flourished.

When he steps down, Walters will be appointed to serve in a volunteer role as an academic athletic fellow-at-large.

As an undergraduate, Walters was the starting point guard on the 1965 NCAA Final Four men's basketball team with future National Basketball Association Hall of Fame player Bill Bradley of the Class of 1965. Walters led the 1967 team to a 25-3 record, the best in school history at the time, and a top-five national ranking. He was featured on the cover of Sports Illustrated with center Chris Thomforde of the Class of 1969.

In 1970, Middlebury College hired Walters as the youngest head basketball coach in NCAA history. He moved to Union College before returning to Princeton as an assistant coach in 1973. Walters served as head coach at Dartmouth College and Providence College and in 1980 was selected to coach at the U.S. Olympic Trials.

He joined Kidder, Peabody & Co. in 1981 as an investment representative. He left as a senior vice president and partner in 1990 to become senior partner of Woolf Associates Sports Management in Boston, and in 1992 became managing director of Seaward Management, an investment advisory firm. He returned to Princeton as athletic director in 1994.

A search to find a successor will commence this fall. Cherrey will chair a committee that will include faculty, administrators, alumni, coaches and students. They are:

Administration: Clayton Marsh, Class of 1985, deputy dean of the college; and Janet Rapelye, dean of admission.

The committee will be staffed by Tara Christie Kinsey, who played softball as a member of the Class of 1997, associate dean in the Office of the Dean of the College and Office of the Vice President for Campus Life.

For more information, go to goprincetontigers.com or the athletic director search website.