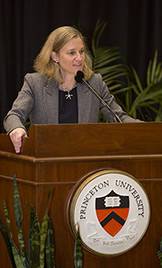 Mollie Marcoux, a legendary student-athlete at Princeton University who has played an integral role in the creation and management of the sports complexes of Chelsea Piers, has been appointed the University's Ford Family Director of Athletics, effective Aug. 4. She will succeed Gary Walters, who announced last fall that he would be stepping down after leading the athletics program at Princeton for 20 years.

"Princeton has a proud and distinguished history of excellence in athletics and a deep respect for the powerful impact that athletics can have on the education and character of the students who participate. I am confident that Mollie Marcoux will build on these traditions and values and provide strong leadership for all of our varsity, club and recreational programs," said Princeton University President Christopher L. Eisgruber, who made the appointment. "Not surprisingly, we had a very strong pool of candidates, and we are delighted that Mollie has agreed to apply her formidable talents and energies to these important new responsibilities."

Marcoux graduated cum laude from Princeton in 1991 after majoring in history and writing her thesis on the history of women in sports from 1895 to 1946. She was a two-sport varsity athlete, earning four letters each in soccer and ice hockey. As a varsity ice hockey player, she was named Ivy League rookie of the year in 1988, earned first-team all-Ivy honors four times, was named the team's most valuable player three times, was elected team captain her senior year, was a first team all-Eastern Collegiate Athletic Conference (ECAC) selection and a member of the ECAC team of the decade, and in 1999 she was named to the Ivy League's silver anniversary ice hockey team. When she graduated she was Princeton's all-time leading scorer and she still ranks first in most goals in a season with 35. She also earned second-team all-Ivy honors in soccer in 1987.

As a senior Marcoux was awarded the C. Otto von Kienbusch Sportswoman of the Year Award for "high scholastic rank, sportsmanship and general excellence in athletics" and the Patty Kazmaier Award as the member of the ice hockey team who made the greatest contribution to the program and exemplified such characteristics as "loyalty …, determination and perseverance under adverse conditions."

Following graduation, Marcoux served as assistant athletic director, assistant dean of admissions, assistant housemaster and coach of girls' ice hockey and soccer at the Lawrenceville School. In her honor Lawrenceville established the Mollie Marcoux Award to recognize the female hockey player who best exemplifies excellence in athletics and academics.

Marcoux began her 19-year career with Chelsea Piers Management, the company that owns and operates two world-class amateur sports complexes, Chelsea Piers New York and Chelsea Piers Connecticut, when its first facility opened in 1995. She quickly moved into senior management positions, becoming first vice president for strategic planning and general manager for the Piers' largest sports venue. In these roles she managed hundreds of employees (including senior directors, managers and high-level coaches) and developed extensive and cutting-edge sports programming for athletes of all ages and abilities. She founded and served as executive director of the Chelsea Piers Scholarship Fund, which since its inception has provided more than 2,000 scholarships to make athletic opportunities available to children in need. Most recently she has served as executive vice president and executive director of Chelsea Piers' 400,000-square-foot multi-venue sports complex in Connecticut, a facility with 375 employees, including a number of highly ranked professional athletes, Olympians, former collegiate coaches, former Ivy League and Division I athletes, and sports industry leaders.

"As an undergraduate, Mollie Marcoux was both an exceptional student and one of the most extraordinary athletes in Princeton history," said Eisgruber, "and since graduation she has demonstrated both executive and leadership abilities at one of the country's leading secondary schools and one of its premier venues for recreational and amateur sports. But more compelling than her accomplishments, as impressive as they are, are the qualities of integrity, enthusiasm, determination, creativity, and the passion for her work, for athletics, and for Princeton that were cited again and again throughout our search by people who have worked with her and known her."

The search for a new director of athletics was led by Vice President for Campus Life Cynthia Cherrey, to whom Marcoux will report. The search committee included faculty, coaches, students, administrators and alumni.

Cherrey said: "Mollie brings experience in launching new ventures, managing complexity, solving problems, and attracting, retaining, mentoring and supporting first-rate coaches. She knows what it is like to be a varsity student-athlete at Princeton and what it took to build and operate Chelsea Piers' state-of-the-art recreational athletics program. The search committee was very impressed by her clear understanding of what makes the experience of athletics at Princeton so special and her deep commitment to both sustain and build on our strengths."

Marcoux said: "For me, this is a once-in-a-lifetime opportunity — to return to a university that played such a transformative role in my life and to do everything I can to be sure that future generations of Princeton students continue to have the educational and character-building experiences and the competitive success that are so highly valued on this campus and among the world-wide Princeton family. I appreciate the confidence in me by President Eisgruber and the search committee, and I very much look forward to working with the students, coaches, staff and others who make Princeton's athletic program a model for others."

Marcoux and her husband, Andrew Samaan, are the parents of three children, aged 10, 8 and 5.