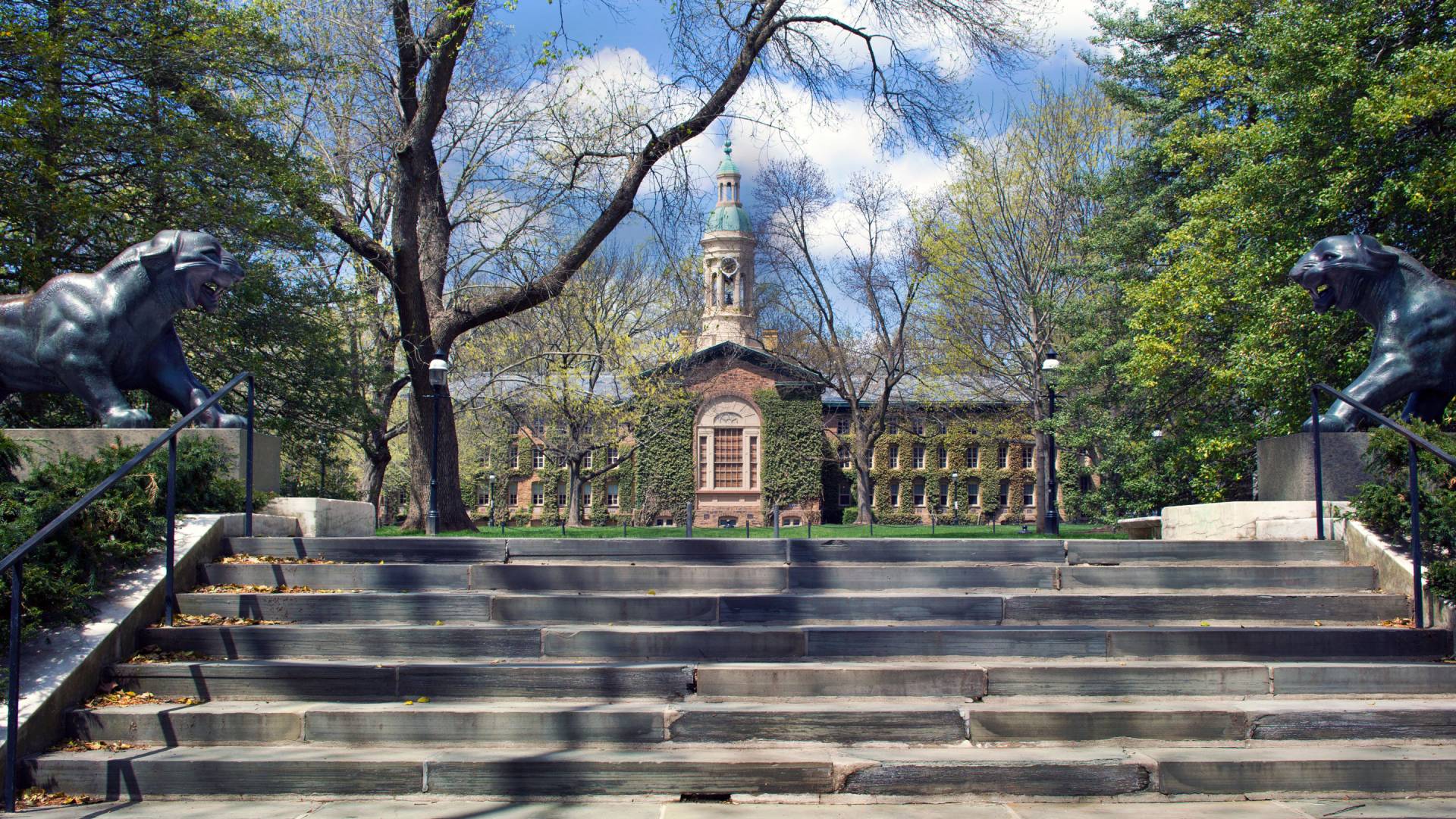 Members of Princeton University's Class of 2017 gathered on Cannon Green on Monday, June 5, to celebrate the conclusion of their undergraduate careers in a Class Day ceremony honoring their accomplishments and service.

The Allen Macy Dulles '51 Award was given to Becca Keener of Pilot Mountain, North Carolina. The award recognizes a senior whose activities at Princeton best exemplify the University's informal motto, "Princeton in the nation's service and the service of humanity." Keener, a religion major, served as a peer academic adviser in Rockefeller College. She co-founded the Princeton Hidden Minority Council, an awareness and advocacy group that advances the needs of first-generation and low-income students. Keener also served as co-president of Princeton Against Sex Trafficking and as an executive board member of Community House at the Pace Center for Civic Engagement. A recipient of the Sachs Scholarship, Keener participated in Princeton Faith and Action, wrote for Princeton Traveler and was a cheerleader for two years. She also held an internship with the Office of Religion and Global Affairs in the U.S. Department of State.

Briana Christophers of Miami, Florida, received the Frederick Douglass Service Award, established in 1969 at the recommendation of Carl Fields, who was assistant dean of the college. The award is given to a senior who has exhibited “courage, leadership, intellectual achievement and a willingness to contribute unselfishly toward a deeper understanding of the experiences of racial minorities and who, in so doing, reflects the tradition of service embodied in education at Princeton.” A molecular biology major, Christophers served as co-president of Princeton Latinos y Amigos, president of the Association of Latino Princeton Alumni and chair of the Conexiones committee. She helped create Project Welcome Mat, an online guide to Princeton for first-generation college students. In 2015, she worked as a member of the Academics and Awareness Working Group of the Special Task Force on Diversity, Equity and Inclusion, sponsored by the Council of Princeton University Community. Christophers also served as a peer adviser in Whitman College and participated in numerous Princeton clubs.

The award recognizes the senior who best embodies the qualities of Princeton's 15th president, Harold Dodds, "particularly in the qualities of clear thinking, moral courage, a patient and judicious regard for the opinions of others, and a thoroughgoing devotion to the welfare of the University and to the life of the mind." Williams is an anthropology major pursuing certificates in archaeology, Latin American studies and urban studies. For the last two years, she served as a residential college adviser in Forbes College. Williams was also captain of the mock trial team and a staff writer for Princeton Traveler, where her article "The Concrete Jungle" was chosen for the "Best of 2015 Issue." A Gates Cambridge Scholarship recipient, she has held summer internships at the Penn Museum of Anthropology and the Metropolitan Museum of Art.

Andrew Yi-Hsuan Sun of Arcadia, California, received the W. Sanderson Detwiler 1903 Prize. The prize is given to a senior who, in the judgment of the student's classmates, has done the most for the class. A member of Butler College, Sun is a Woodrow Wilson School major with a certificate in American studies. During his senior year, Sun served as president of the Class of 2017. He created a popular series of '17 events for his class, with a different activity featured on the 17th of each month. He also organized events such as the senior class dinner, senior wine night and senior pub nights. Beyond his involvement in student government, Sun was chair of the Senior Class Commencement Committee and Campus and Community Affairs. He also participated in the Alumni Association Executive Council, Pace Council for Civic Values, the Communiversity Planning Committee and the Honor Committee.

The Class of 1901 Medal was given to Aleksandra Czulak of Elmwood Park, Illinois. The medal recognizes the senior who, in the judgment of the student's classmates, has done the most for Princeton. Czulak is an economics major earning certificates in global health and health policy and technology and society. She served as president of the Undergraduate Student Government, where she previously held positions as vice president and executive secretary. Czulak was also a residential college adviser in Whitman College, a Peer Health adviser, director of recruitment of Students for Education Reform and logistics coordinator for the Ivy Policy Conference Team. She held an internship at the National Economic Council at the White House, where she was a member of the Health Care, Veterans Affairs, and Energy and Youth Economic Policy Portfolios. She also coordinated the White House Organ Summit and researched Medicare payment reforms.

Daniel Rounds of Media, Pennsylvania, received the Priscilla Glickman '92 Memorial Prize. The prize, now in its 25th year, honors "independence and imagination in the area of service." A member of Butler College, Rounds is a Spanish and Portuguese major with a certificate in Latino studies. During his four years at Princeton, he volunteered and held leadership positions with Community House, a Pace Center for Civic Engagement program that works to close the achievement gap for underrepresented youth. He participated in two International Internship Program experiences, traveling to Guatemala to focus on the stigma and discrimination associated with HIV/AIDS. His resulting junior paper won the Premio Maria Zambrano for an outstanding junior paper in the Spanish and Portuguese department. Rounds also played saxophone with the Triangle Club and worked in the Butler/Wilson dining hall.

The Class of 1916 Cup was presented to Ashley Richards of Greenwich, Connecticut. The award, which was given by the Class of 1916 on the occasion of its 50th reunion, is presented to the senior varsity letter winner with the highest academic standing. Richards, an English major, was a four-year member of the women's squash team. Besides attaining the highest level of academic achievement in the classroom, Richards demonstrated remarkable athletic perseverance. Throughout her time at Princeton, she continued to develop her squash game while adding depth to the team. Her progress was rewarded during her varsity debut this past season, when she contributed to an early-season team victory at Jadwin.

The William Winston Roper Trophy was awarded to Spencer Weisz of Florham Park, New Jersey. The trophy goes to "a male senior of high scholastic rank and outstanding qualities of sportsmanship and general proficiency in athletics." Weisz, a history major and member of the basketball team, was the 2017 Ivy League Player of the Year. As a freshman, he was named Ivy League Rookie of the Year. He has been a three-time All-Ivy League honoree. Weisz helped lead Princeton to a 19-game winning streak, the second-longest in Princeton basketball history, and he contributed to Princeton's 14-0 Ivy League season in 2016-17, the program's first since 1998. Weisz was also instrumental in Princeton's victory this year in the inaugural Ivy League Men's Basketball Tournament. He concluded his college career as the 12th-leading all-time scorer in Princeton basketball history.

The C. Otto von Kienbusch Ward was given to Ashleigh Johnson of Miami, Florida. The award recognizes the top senior sportswoman at Princeton. Johnson, a psychology major, is one of the most accomplished athletes in Princeton history. She was the goalie on the gold-winning U.S. water polo team in the 2016 Olympic Games. She has twice been named the top women's water polo player in the world, and she was the first African American to make the U.S. national water polo team. She is a 19-time winner of Collegiate Water Polo Association (CWPA) Defensive Player of the Week, a four-time first-team all-conference player and the CWPA Player of the Year. She was named an espnW IMPACT 25 honoree for Woman of the Year and the Swimming World Magazine's Female Water Polo Player of the Year for two seasons straight. She was also the first water polo player to win the Women's Sports Foundation Sportswoman of the Year award.

The Arthur Lane '34 Award honors selfless contribution to sport and society by an undergraduate athlete. This year the honor was shared by Steven Cook, of Winnetka, Illinois; Fiona McKenna, of Burr Ridge, Illinois; Alex Michael, of Nevada City, California; Olivia Hompe, of New Canaan, Connecticut; and Hailey Reeves, of Vancouver, Canada. Cook, an economics major, served as a two-year captain of the basketball team. He raised money for the Gidel Mother of Mercy Hospital in Sudan and interned for Heartland Alliance, an anti-poverty organization in Chicago. Cook was a three-time All-Ivy League honoree and a member of Allstate NABC Good Works Team. McKenna is an economics major who served as assistant captain for the women's ice hockey team. She organized an annual fundraising event for causes such as colon cancer and mental health awareness. The summer before her senior year, she traveled to Nepal to teach English as part of the WorldTeach Summer Program.  She also participated in Princeton Varsity Club, Reading with the Tigers and Weapons of Mass Construction. Michael, an economics major, walked onto the men's heavyweight rowing team as a 16-year-old freshman. He started a Special Olympics rowing program in concert with Special Olympics of New Jersey. The program has grown to more than 100 rowers and continues to expand. Hompe is a Woodrow Wilson School major and the Princeton women's lacrosse all-time leading scorer. She was a two-year team captain, first-team All-America member and one of the 2017 Princeton University Scholars in the Nation's Service. In her role as president of the Varsity Student-Athlete Advisory Committee, Hompe promoted diversity and inclusion on campus by implementing the "All Stripes, One Streak" campaign. Reeves, an ecology and evolutionary biology major, was a three-time Ivy League champion and captain of the 2016-17 Final Four field hockey team. As a Student-Athlete Wellness Leader and president of the Student Athlete Service Council, she partnered with local organizations to provide service opportunities for Princeton student-athletes. During the summer of 2016, Reeves traveled to Rio de Janeiro, Brazil, where she worked in a maternal and child care hospital to study the Zika virus.

The Class of 2017 also recognized the following people as honorary class members during this year: Bryant Blount, assistant dean of undergraduate students and a Class of 2008 graduate; Christopher L. Eisgruber, president of Princeton University and a Class of 1983 alumnus; F. Scott Fitzgerald, writer and member of the Class of 1917; Ann Halliday, associate secretary and special assistant to the president, special assistant to the dean of the college in the Office of the Vice President and Secretary, and a 1978 graduate alumna; David Leach, former senior associate athletic director for Campus Recreation; Baz Luhrmann, film director, screenwriter and producer and this year's Class Day speaker; Jeff Nunokawa, professor of English and head of Rockefeller College; and Penna Rose, director of chapel music in the Office of the Dean of Religious Life.