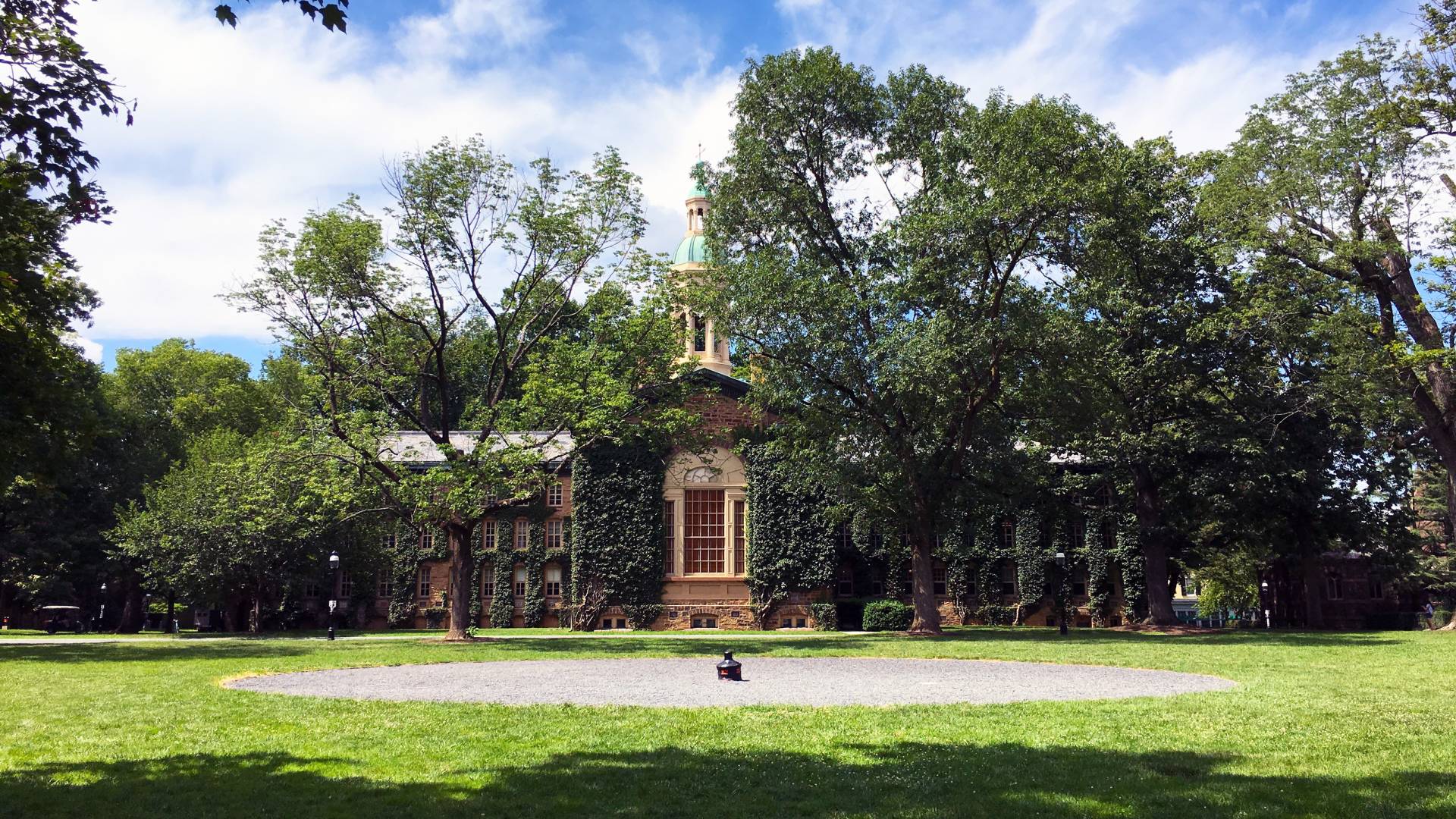 Members of Princeton University’s Class of 2018 gathered Monday, June 4, to celebrate the end of their undergraduate careers during the Class Day ceremony honoring their achievements and leadership.

The Allen Macy Dulles ’51 Award was given to María Perales Sánchez of Houston. The award recognizes a senior whose activities at Princeton best exemplify the University’s informal motto, “Princeton in the nation’s service and the service of humanity.” Sánchez is a major in the Woodrow Wilson School of Public and International Affairs earning certificates in Latino studies and Latin American studies. She worked with the Pace Center for Civic Engagement’s “Dream Team,” which works with migrant communities in Princeton and Trenton, New Jersey, and supports social justice issues across the country. She also was involved with the Pace Center’s Community House and participated in Breakout Princeton service trips. She was a mentor with the Scholars Institute Fellows Program (SIFP) for first-generation college and low-income students on campus, as well as a peer adviser in Whitman College.

Nicholas Ming-Li Wu of Grosse Pointe Shores, Michigan, received the Frederick Douglass Service Award, established in 1969 at the recommendation of Carl Fields, who was assistant dean of the college. The award is given to a senior who has exhibited “courage, leadership, intellectual achievement and a willingness to contribute unselfishly toward a deeper understanding of the experiences of racial minorities and who, in so doing, reflects the tradition of service embodied in education at Princeton.” Wu is a Woodrow Wilson School major pursuing certificates in American studies and East Asian studies. He was a leader for Princeton’s Asian American Student Association and Princeton Advocates for Justice, which advocates for the protection and advancement of basic human rights. He was head opinion writer for The Daily Princetonian student newspaper, contributing opinion pieces on issues such as gun control, immigration and climate change. Wu also was an ambassador for the national organization Asian and Pacific Islander American Vote.

The Harold Willis Dodds Achievement Prize was presented to Nicholas Fernández of Miami Lakes, Florida, and to Carolyn Liziewski of Portland, Maine. The award recognizes the senior who best embodies the qualities of Princeton’s 15th president, Harold Dodds, “particularly in the qualities of clear thinking, moral courage, a patient and judicious regard for the opinions of others, and a thoroughgoing devotion to the welfare of the University and to the life of the mind.” Fernández is a politics major earning a certificate in American studies. Fernández served as chair of the Undergraduate Student Government’s Projects Board, and as a student member of the University’s Campus Iconography Committee. He founded the Princeton Orientation Leader Corps and was a member of the LatinX Collective student group. He also was editor of the Nassau Herald. Liziewski is a politics major pursuing a certificate in values and public life. She served on the Honor Committee in the roles of first-year representative, clerk and chair. She was a member of the Undergraduate Student Government’s Women’s Leadership Task Force and was financial vice president of the Princeton Debate Panel. She also was the Class of 2018’s Annual Giving co-chair.

The W. Sanderson Detwiler 1903 Prize was awarded to Brandon McGhee of South Euclid, Ohio. McGhee is a politics major earning a certificate in African American studies. The prize is given to a senior who, in the judgment of the student’s classmates, has done the most for the class. McGhee was a Freshman Class Council officer his first year and served as U-Councilor his sophomore year. He was president of the Class of 2018 his junior and senior years. He was a residential college adviser in Forbes College. McGhee also was a member of the Honor Committee, Old NasSoul a cappella group and Hallelujah Church. He is a previous recipient of the Princeton Prize in Race Relations.

Myesha Jemison of Virginia Beach, Virginia, was given the Walter E. Hope Class of 1901 Medal. The award recognizes the senior who, in the judgment of the student’s classmates, has done the most for Princeton. Jemison is a Spanish and Portuguese major pursuing certificates in African American studies, African studies, environmental studies and Latin American studies. Jemison was president of the Undergraduate Student Government and previously served as class senator. She was a residential college adviser in Forbes College, co-chair of Community House, a diversity fellow at the Carl A. Fields Centers for Equality and Cultural Understanding, and president of the Princeton Caribbean Connection student group. She also served as a student representative on various University committees.

The Priscilla Glickman ’92 Memorial Prize, which honors “independence and imagination in the area of service” was awarded to Anam Vadgama of Mumbai, India. Vadgama is a politics major. This summer, she will be a project associate for the Keller Center for Innovation in Engineering Education’s Tiger Challenge, which teams students with communities to design impactful innovations. She previously was a social impact designer for the Tiger Challenge’s project to help refugees find better careers in New York and New Jersey. She was a teacher with the Boys and Girls Club in Lawrenceville, New Jersey, and taught English to public school students in Trenton through the Pace Center. Outside of Princeton, she is working to start an English medium school for girls in a village in Maharashtra, India.  She also designed curriculum for public schools in India as part of the course “Dance: Education in Pedagogy” and is collaborating with government officials and non-governmental organizations to implement the curriculum in Indian schools. She taught English to Tibetan refugees living in India and spent a summer in Zimbabwe with the organization African Impact, where she was a wildlife conservation assistant and taught English and dance classes in public schools. Before coming to Princeton, she founded Felicity in Mumbai, a student group promoting gender equality in access to education through development programs and theater.

The Class of 1916 Cup was presented to Delaney Miller of San Diego, California. The award, which was given by the Class of 1916 on the occasion of its 50th reunion, is presented to the senior varsity letter winner with the highest academic standing. A mechanical and aerospace engineering major, Miller has been a member of both the cross country and track and field teams for four years. She also is earning a certificate in robotics and intelligent systems and her senior thesis was titled “Assessment of a Wireless Accelerometer System for Tracking Asymmetries in Gait.” She is a member of the Tau Beta Pi Engineering Society and won the Myers Award, which is the track and field team’s scholarship award. She was a residential college adviser at Butler College and a student-athlete wellness leader.

The William Winston Roper Trophy was awarded to Charles “Chad” Kanoff of Pacific Palisades, California. The trophy goes to “a male senior of high scholastic rank and outstanding qualities of sportsmanship and general proficiency in athletics.” Kanoff is a member of the football team. An All-Ivy League starting quarterback during the football team’s 2016 Ivy League championship season, Kanoff broke records during his college career. Kanoff, who won the 2017 Bushnell Cup winner as the Ivy League Offensive Player of the Year, set the Ivy League record with both 3,474 passing yards and a 73.2 completion percentage during his senior season. He broke the Princeton single-season record for passing touchdowns, and set the program record for career passing yards. Kanoff helped produce the Ivy League’s top-ranked offense in each of the last two seasons. Kanoff, who started the last 30 games of his career for Princeton, signed a contract with the Arizona Cardinals in the offseason.

The C. Otto von Kienbusch Ward was given to Vanessa Gregoire of Beaconsfield, Quebec, Canada. The award recognizes the top senior sportswoman at Princeton. Gregoire is a member of the women’s soccer team and is an anthropology major. She was a co-captain when the team won the Ivy League championship and advanced to the NCAA quarterfinals this past fall. She was named the 2018 Ivy League Offensive Player of the Year for women's soccer and also was awarded Ivy Player of the Year. Gregoire closed her career with a United Soccer Coaches second-team All-America honor last season as well as first-team All-East Region. She was a first-team All-Ivy League honoree in 2017, making four All-Ivy honors in four years.

The Arthur Lane ’34 Citizen Athlete Award honors selfless contribution to sport and society by an undergraduate athlete. This year the honor was shared by Abby Finkelston of Leonardtown, Maryland; Ehidiamen “Junior” Oboh from Old Bridge, New Jersey; and Natalie Tung of Hong Kong. Finkelston, a neuroscience major, was team captain for the four-time Ivy League champion women’s lacrosse team. After two successful seasons, Finkelston suffered an injury that sidelined her from game action, but did not stop her from participating in athletics. She founded and chaired the Wounded Tigers Network, a group of Princeton student-athletes that offers support and guidance to other injured student-athletes on campus. She also served the community through her volunteer efforts with the local Best Buddies organization, Meals on Wheels, Trenton Senior Center, Harlem Lacrosse and the Special Olympics. For her on-field and community service efforts, she was nationally recognized with the prestigious “Unsung Hero” of women’s college lacrosse by the One Love Foundation in 2017. Oboh is a history major and was captain of the men’s volleyball team this year when they played in the Eastern Intercollegiate Volleyball Association championship match. He was a member of Princeton Faith and Action, the Princeton African Students Association and Profound Ivy, a student group for black male athletes. He was vice president of the Varsity Student Athletic Advisory Committee (VSAAC), a student-athlete wellness leader and a board member of the Black Men's Awareness Group. In his VSAAC role, he helped organize the “All Stripes One Streak” campaign, aimed to promote diversity and inclusion within Princeton athletics and beyond. Oboh was selected to represent the Ivy League as its student-athlete representative at the 2017 NCAA National Leadership Forum. Tung, an English major, was a four-year member of the women’s squash team. She was co-founder and executive director of HomeWorks, a nonprofit organization that provides an after-school boarding program to underserved middle and high school girls in Trenton, New Jersey. She has served as a youth mentor as part of both Camp Kesem and the Big-Sibling, Little-Sibling program. On campus, she was a student-athlete wellness leader, a member of the eHub Princeton Entrepreneurship Council Incubator and Accelerator Program, and a peer arts adviser for the Program in Creative Writing.

The Class of 2018 also recognized the following people as honorary class members: Barbara Baldwin, who works for the TigerTransit campus shuttle; Class Day speaker U.S. Sen. Cory Booker; Eddie Glaude, the William S. Tod Professor of Religion and African American Studies and chair of the Department of African American Studies; Carol Klein of the student publication Business Today; Mollie Marcoux Samaan, a member of the Class of 1991 and the Ford Family Director of Athletics; Tom Sparich, former conductor of the NJ Transit “Dinky” train in Princeton; and Uwe Reinhardt, the former James Madison Professor of Political Economy. Reinhardt was honored in memory following his death in November 2017.