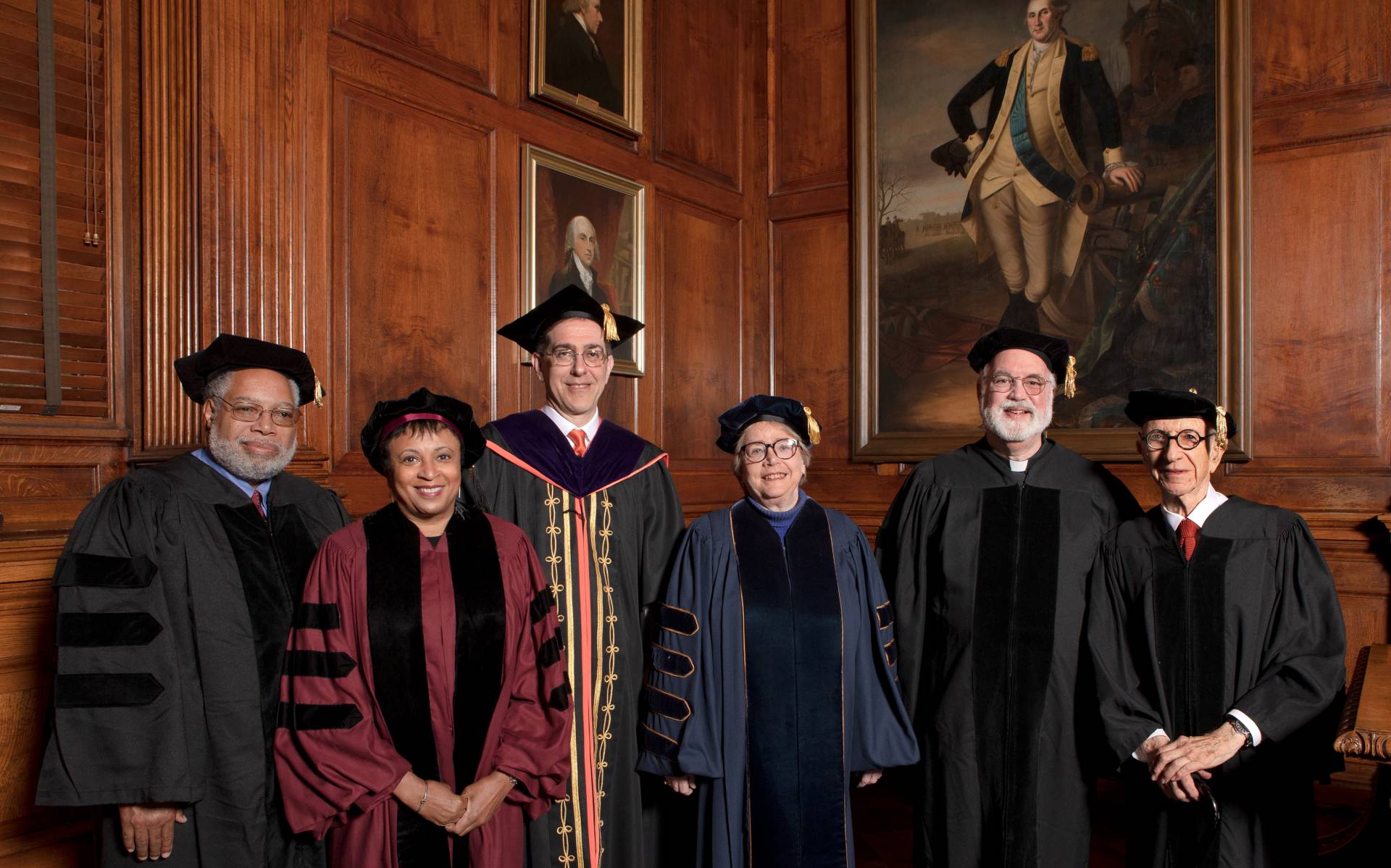 Father Gregory Boyle is the founder of Homeboy Industries in Los Angeles, the largest gang intervention, rehabilitation and re-entry program in the world. The organization, established in 2001, is an independent nonprofit that provides critical services to around 15,000 men and women every year. Father Boyle entered the Society of Jesus (the Jesuits) in 1972 and was ordained a Catholic priest in 1984. From 1986 to 1992, Boyle served as pastor of Dolores Mission Church in East Los Angeles, an area with the highest occurrence of gang violence in the city. Working with parish and community members, Boyle focused on turning the tide against mass incarceration by treating gang members as human beings. This led to the founding in 1988 of Jobs for a Future, which offered an alternative school and day care program and helped youth seek employment. After the 1992 riots in Los Angeles, Jobs for a Future and Proyecto Pastoral, a community-organizing project started at Dolores Mission, launched their first social enterprise business in an abandoned bakery — called Homeboy Bakery — which supported the groundwork for Homeboy Industries. Boyle is the author of the 2010 award-winning book “Tattoos on the Heart: The Power of Boundless Compassion” and the 2017 Los Angeles Times-bestseller “Barking to the Choir: The Power of Radical Kinship.” He received the California Peace Prize and was inducted into the California Hall of Fame. In 2014, the White House named him a “Champion of Change.” Boyle received the 2016 Humanitarian of the Year Award from the James Beard Foundation and the University of Notre Dame’s 2017 Laetare Medal. Last year he was the Judith H. Rawson and Robert Rawson Distinguished Visitor at Princeton’s Woodrow Wilson School of Public and International Affairs. He received his B.A. from Gonzaga University, M.A. from Loyola Marymount University, M.Div. from Weston School of Theology, and S.T.M. from the Jesuit School of Theology at Berkeley.

As a young priest in East Los Angeles, he found himself in a parish racked with gang violence and scarred by poverty, addiction and despair. He learned that while he could not dispel this darkness on his own, he could help others “turn the light switch on” by creating alternatives to gangs in the form of social enterprises, grounded in human solidarity and buttressed by rehabilitative services. Beginning with a bakery in 1992, Homeboy Industries has empowered thousands of onetime gang members to redirect their lives and, like its founder, is now a source of inspiration throughout the country and the world.

Lonnie Bunch is the founding director of the Smithsonian’s National Museum of African American History and Culture. He played a crucial role in establishing the museum’s mission, coordinating its fundraising and membership campaigns, developing its collections, and establishing its cultural partnerships. He designed a high-profile program of traveling exhibitions and public events, including the “Changing America” exhibition being shown at 50 venues across the country this year. The “Save Our African American Treasures” program he established features daylong workshops where participants work with conservation specialists and historians to learn about identifying and preserving items of historical value. Previously, Bunch was president of the Chicago Historical Society, and before that was the first curator at the California African American Museum. He has written several books, including “Black Angelenos: The African American in Los Angeles, 1850-1950.” Last year, he received the President’s Award from the National Association for the Advancement of Colored People. In 2016, he was honored with the Visionary Historian Award from the Historical Association of Washington, D.C. He received bachelor’s and master’s degrees from American University.

In the study of history he found his muse and his mission — to give voice to the voiceless and to make visible the invisible. As founding director of the National Museum of African American History and Culture, he raised the necessary funds, collected nearly 40,000 objects, and secured a site on the national Mall, a place where slaves once toiled and where King once dreamed. With vision, perseverance, diplomacy and what President Barack Obama called his “street smarts,” he created a magnificent space which tells the American story through the African American lens. We are proud to honor this curator of a people’s journey, “just a kid from Jersey,” as he calls himself, who has shown us how to “use history to make America better.”

Robert Geddes, the William Kenan, Jr., Professor of Architecture, Emeritus, joined Princeton’s faculty in 1965 as dean of the School of Architecture. Geddes served as dean for 17 years before retiring in 1989. Under his leadership, the school emerged as a major center for the exchange of architectural ideas, while retaining its small size and close ties with the rest of the University. Geddes connected architecture with the humanities and social sciences, and with public affairs and urban design. He co-founded a collaborative practice, Geddes Brecher Qualls & Cunningham: Architects, in Philadelphia and Princeton, which won several national and international design competitions, including for the Vienna South-Urban Extension in Austria, the Birmingham-Jefferson Civic Center in Alabama, and the home for seniors, Architects Housing Company, in Trenton, New Jersey. The firm also designed several buildings at universities in the United States, and in the Princeton area designed the dining hall quad at the Institute for Advanced Study and Princeton Community Housing’s Griggs Farm neighborhood. Geddes is a fellow of the American Institute of Architects (AIA) and the National Academy of Design. In 1979, GBQC was awarded the highest professional honor of AIA, the Architectural Firm Award, for “design quality, respect for the environment and social concern.” Geddes was the urban design consultant for the Center City Plan of Philadelphia (1988) and the Third Regional Plan of New York for the Regional Plan Association (1996). He received the AIA/ACSA Award for Excellence in Architectural Education in 1984. He received his M.Arch. from Harvard University.

A gifted architect and teacher, he practiced and taught architecture as a social art engaged in the design of the human environment. As the first dean of Princeton’s School of Architecture, he heightened its eminence and distinctiveness, expanded its scope, broadened its curriculum, and deepened its connections with the humanities, social sciences and public affairs. His “Princeton Report” for the American Institute of Architects changed the structure of architectural education in the United States by galvanizing these kinds of cross-disciplinary connections. His buildings express his deep understanding of the human experience and a prodigious environmental sensitivity; they serve as artful lessons in shaping the built environment.

R. Barbara Gitenstein has more than 40 years of experience as a professor and administrator in the public and private sectors of higher education. Since 1999, she has served as president of The College of New Jersey, the first woman to have that role in TCNJ's 160-year history. She came to TCNJ from Drake University, where she was provost and executive vice president. During her tenure at TCNJ, Gitenstein has focused on enhancing academic rigor and faculty-student engagement, raising the four-year graduation rate, investing in campus amenities and facilities, and boosting alumni support. A scholar of Jewish and American literature, Gitenstein is the author of “Apocalyptic Messianism and Contemporary Jewish-American Poetry.” She serves on the Board of Directors for the American Council on Education and on the Executive Board of the New Jersey Presidents’ Council, and she previously chaired the Middle States Commission on Higher Education, the body that accredits colleges and universities in the mid-Atlantic region, including Princeton. Gitenstein has supported the professional advancement of women throughout her career. Among her honors, she was recognized in 2009 by the Women’s Caucus of New Jersey as a Woman of Achievement. She received her B.A. from Duke University and her Ph.D. from the University of North Carolina.

This visionary leader is the first woman to serve as president of The College of New Jersey in the institution’s 160-year history. Determined to provide her students with the highest caliber academic experience, she has led transformative efforts to improve TCNJ’s four-year graduation rate, which now ranks among the highest in the nation for public colleges and universities. On a national level, she has been a steadfast advocate for academic rigor, high standards and expanded educational opportunity. Throughout her career, as a scholar of Jewish and American literature and as an insightful administrator, she has demonstrated the power of education to change lives and change the world.

Carla Diane Hayden was sworn in as the 14th Librarian of Congress on Sept. 14, 2016. She is the first woman and the first African American to lead the national library. Previously, she was CEO of the Enoch Pratt Free Library in Baltimore for more than 20 years. She began her library career in 1973 at the Chicago Public Library, where she held several positions, including as deputy commissioner and chief librarian. She taught at the University of Pittsburgh and also worked at the Museum of Science and Industry in Chicago. When she served as president of the American Library Association from 2003 to 2004, her theme was “equity of success.” In 1995, she received the Library Journal’s Librarian of the Year Award in recognition of her outreach services at the Pratt Library, which included an after-school center for Baltimore teens offering homework assistance and college and career counseling. She received her bachelor’s degree from Roosevelt University and master’s and doctoral degrees from the University of Chicago Graduate Library School.

Amid the unrest following the death of Freddie Gray in 2015, she kept the doors open at Baltimore’s Enoch Pratt Free Library, providing a safe haven for a community in distress. During her more than two decades at Pratt, she modernized and revived the 22-branch library system, making it a home for people from all walks of life. In 2016, she became the first person of color and the first woman to serve as the Librarian of Congress. A descendent of people once denied the right to read — and punished for trying — she now leads the country’s national symbol of knowledge. Heralded as a “librarian freedom fighter,” she champions open access to information and education for all.