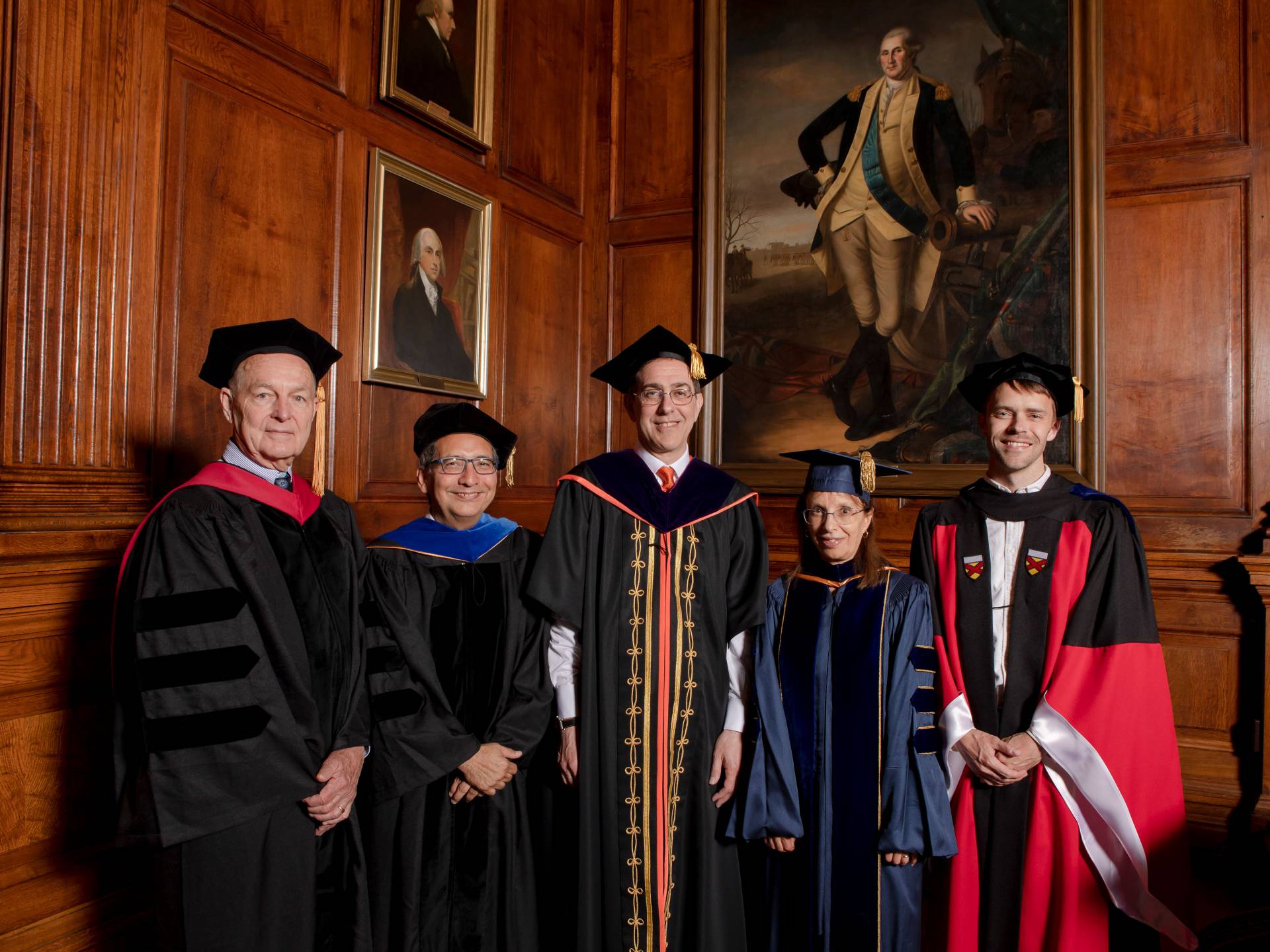 The awards were established in 1991 through a gift by Princeton alumni Lloyd Cotsen of the Class of 1950 and John Sherrerd of the Class of 1952 to recognize excellence in undergraduate teaching by Princeton faculty members. Each winner receives a cash prize of $5,000, and their departments each receive $3,000 for the purchase of new books.

Eduardo Cadava, who has served on the Princeton faculty since 1988, specializes in American literature and culture, literary and political theory, comparative literature, media technologies, and theory of translation. He has served as head of Wilson College and has had a long association with the residential college system at Princeton.

Noted a faculty member, “I am astonished by his commitment to teaching, advising and mentoring at all levels.” Echoed another, “I can’t think of any other scholar at Princeton who is [more] able to generate enthusiasm for innovative teaching across the disciplines.”

His undergraduate students describe him as “brilliant,” “inspiring,” “indefatigable” and “life-changing.” Said one graduate, “If there is one person at Princeton who taught me to think, it is Professor Eduardo Cadava, and his lessons still shape who I am today.”

Current graduate students and those now pursuing their own careers describe him as a transformative teacher whose example they turn to again and again. “I am especially proud to share what I learned from watching him in the classroom with the students I now work with every day,” said one recent Ph.D. student.

Cadava’s impact as a teacher extends beyond the classroom. A faculty member remarked on the major conferences he organizes, his connections with alumni, and his role at Wilson College, “where he sought to make the residential college an extension of the classroom rather than an escape from it.”

Casey Lew-Williams, a faculty member since 2014, is a developmental psychologist who studies language acquisition. He is co-director of the Princeton Baby Lab, which examines how babies and young children learn to see, talk and understand the world. At the Baby Lab, he collaborates closely with Princeton students.

Lew-Williams teaches “Developmental Psychology,” the department’s largest class, with more than 200 students. The word “amazing” is commonly used by students about the class, and the passion Lew-Williams has for his subject is infectious. “Rather than just giving out the material, he lectures to make sure we take something away from this class, potentially information that we would use in the future (in terms of raising kids or changing the way we think),” said a student.

Graduate students who work with Lew-Williams as assistants in instruction commend the attention he takes to train them. One said that the regular training meetings are “not just an organization meeting for the next precept, but planning plus therapy session plus pedagogy lessons all rolled up into one. … He is the first person I think of, when I think about who I want to model my teaching style after.”

Students highlighted Lew-Williams’ sensitivity to individual learning. Described one undergraduate who took an upper-level seminar Lew-Williams taught: “I am normally afraid of participating in class and giving presentations, and literally never felt any sort of anxiety in this class. Prof. Lew-Williams works magic in the learning environment that he creates, and I will remember some of the lessons from this course for the rest of my life.”

A graduate student said about working at the Baby Lab, “Casey truly shines as a teacher.” With 21 undergraduate assistants in the lab, the student explained that Lew-Williams “asks them how their chemistry exam went, and how their mom is doing. … Casey’s pedagogical philosophy — treating every student as an individual — makes our lab an extremely productive learning environment.”

One faculty member highlighted the positive impact Lew-Williams has on the entire psychology department, “… his warm, perceptive and constructive comments elevate the level of every departmental activity that he participates in, from the weekly cognitive lunch brown bag (which he organizes) to cognitive science seminars (which he also organizes) to professional development activities that he organizes.”

This year marks Martin Semmelhack’s 40th anniversary at Princeton, where his teaching had focused on undergraduate organic chemistry, inspiring generations of students.

Described as a “treasure” in the chemistry department, Semmelhack’s colleagues say they aspire to emulate his example of teaching and mentorship. A faculty member noted that the letters nominating him underscore Semmelhack’s “devotion to student learning, his ability to inspire students through his role as a teacher of organic chemistry, his caring mentorship as a research adviser for our undergraduate and graduate students, as well as his considerable, positive impact on the intellectual and professional developments of the authors of those letters.”

The organic chemistry courses Semmelhack teaches span two semesters. Said one colleague: “Organic chemistry is a voluminous field that requires its students to understand and communicate with a new language based on molecular structures. … It is certainly difficult for any teacher of this subject to capture the magic of organic chemical reactions in ways that are easily understood by beginning students, and the record reflects that Martin Semmelhack has been unusually effective at teaching undergraduate organic chemistry.”

An undergraduate who took Semmelhack’s courses and now serves as a precept assistant for organic chemistry described his teaching style as “responsive to students” and “flexible,” and that it “truly reflects his desire to see every student succeed.” She highlighted his availability during office hours and his willingness to consider feedback and adapt course materials and software to help students learn.

A former graduate student, now a professor himself, said, “I can honestly say that everything I learned about teaching, I learned from Marty.”

Asked another former student: “How does one ignite a new interest or build upon a preexisting love of chemistry in a seemingly intimidating and overwhelming undergraduate environment? To this day, I cannot explain how Dr. Semmelhack accomplishes this year after year.”

A colleague noted that Stone’s course “Buddhist World of Thought and Practice” has “become a vital course for the department’s undergraduate curriculum and for the study of religions of Asia at Princeton. Courses on Buddhism generally draw high enrollments, but the true gauge of the success of this course is Stone’s gentle and careful work to move students beyond what might be an initial romance with Buddhism and to immerse them in a complex world of religion, history and culture.”

Stone is lauded for her guidance of students as they pursue independent work, with undergraduates noting her “accessibility, detailed and engaged feedback, and thoughtful encouragement.”

One graduate alumnus who now teaches in the field stated, “There is really no other way to say it: Jacqueline Stone is simply the best adviser on the planet.”

Another student, wondering about going to graduate school, was told that “Jackie will turn you into a scholar,” which he said he found to be “powerfully true.” Said the student, “Through rigorous instruction, tireless attention and model behavior, Jackie has transformed me from a raw first-year graduate student into a critical and careful scholar.”

Students value the innovative approach Stone brings to the classroom. A former undergraduate said that one of her favorite courses that she took as a religion major was Stone’s “Religion in Japanese Culture,” which included extensive use of mixed media. “Handling relics from her travels in Japan and watching film clips related to shamans and ascetics, sacred pilgrimages, ghost stories, and WW II propaganda made the subject matter come alive for me and allowed our class to experience a multisensory form of learning.”