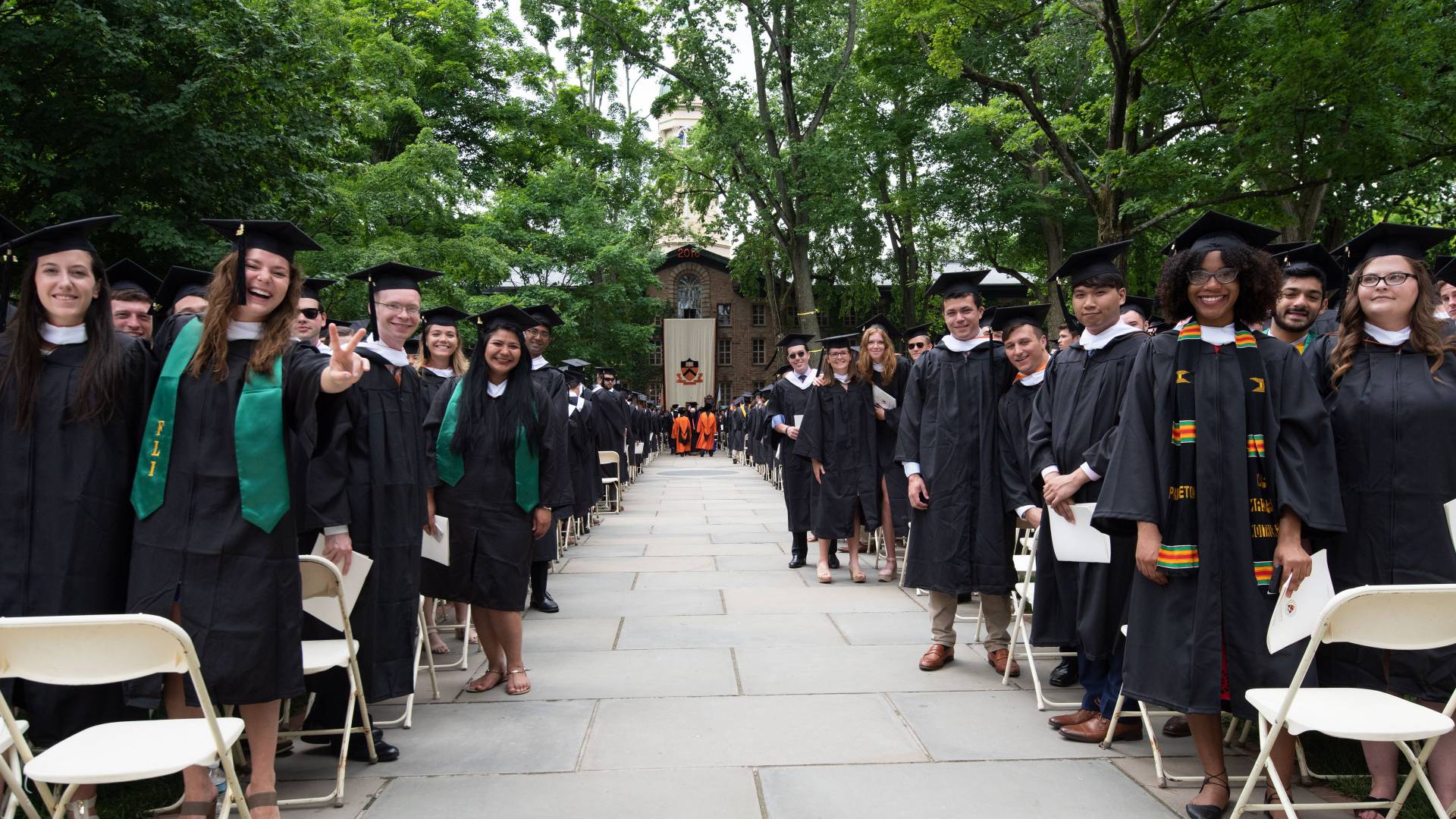 President Christopher L. Eisgruber, the 20th president of Princeton, presided over the University’s 271st Commencement on Tuesday, June 5, on the front lawn of Nassau Hall.

Princeton University awarded degrees to 1,281 undergraduates in the Class of 2018, three from former classes and 563 graduate students at its 271st Commencement on Tuesday, June 5.

The University also awarded honorary degrees to five individuals for their contributions to architecture, education, the humanities and public service: Rev. Gregory Boyle, S.J., founder and executive director of Homeboy Industries in Los Angeles; Lonnie Bunch III, founding director of the Smithsonian’s National Museum of African American History and Culture; Robert Geddes, an architect and professor at Princeton; Barbara Gitenstein, president of The College of New Jersey; and Carla Diane Hayden, the 14th Librarian of Congress.

President Christopher L. Eisgruber, the 20th president of Princeton, presided over the exercises and addressed the graduates. Students and guests filled the front lawn of historic Nassau Hall for the morning ceremony.

Kyle Berlin, who majored in Spanish and Portuguese and received certificates in Latin American studies, creative writing and theater, delivered the valedictory oration. Berlin, of Arroyo Grande, California, was awarded the George B. Wood Legacy Junior Prize in 2017, the Freshman First Honor Prize in 2015 and the Shapiro Prize for Academic Excellence in 2014-15.

In the summer of 2017, he received a Davis Projects for Peace grant to perform interviews and make a community-based documentary theater show in his hometown about the idea of “home.” The show drew its name from the unofficial motto of the town, “Nice Town, Normal People,” and questions what it means to be “nice” and “normal.”

After graduation, he will take this show on the road with the nonprofit he co-founded, Rhizome Theater Company, beginning in East Blue Hill, Maine, where he will perform “Nice Town, Normal People” and help the village make its own interview-based show about what “home” means in these times. He also hopes to train in Theatre of the Oppressed, a type of theater-making originating in Brazil “that aims to use theater as a means of social and political change by actively involving marginalized communities in transforming their reality and undoing acts of oppression,” he said.

Katherine Lim, a computer science major from Atherton, California, delivered the salutatory address. The address, which is the University’s oldest student honor and is traditionally given in Latin, began as a serious, formal address during an era when the entire Commencement ceremony was conducted in Latin. It has evolved to become a farewell to Princeton campus life that often includes humorous tributes and recollections.

Lim received a Shapiro Prize for Academic Excellence after her first year at Princeton. This past year, she won an Accenture Prize from the Department of Computer Science. After she graduates, Lim will start a Ph.D. program in computer science at the University of Washington.

Class of 2018 recognized at Commencement, by the numbers
• 664 men, 617 women
• 943 Bachelor of Arts
• 338 Bachelor of Science in Engineering
• 1,281 total Class of 2018 undergraduate degrees
• 3 degrees to members of previous classes who completed degree requirements during the 2016-17 academic year. (In previous months, 16 degrees were awarded to graduates of former classes who completed degree requirements earlier in the year.)