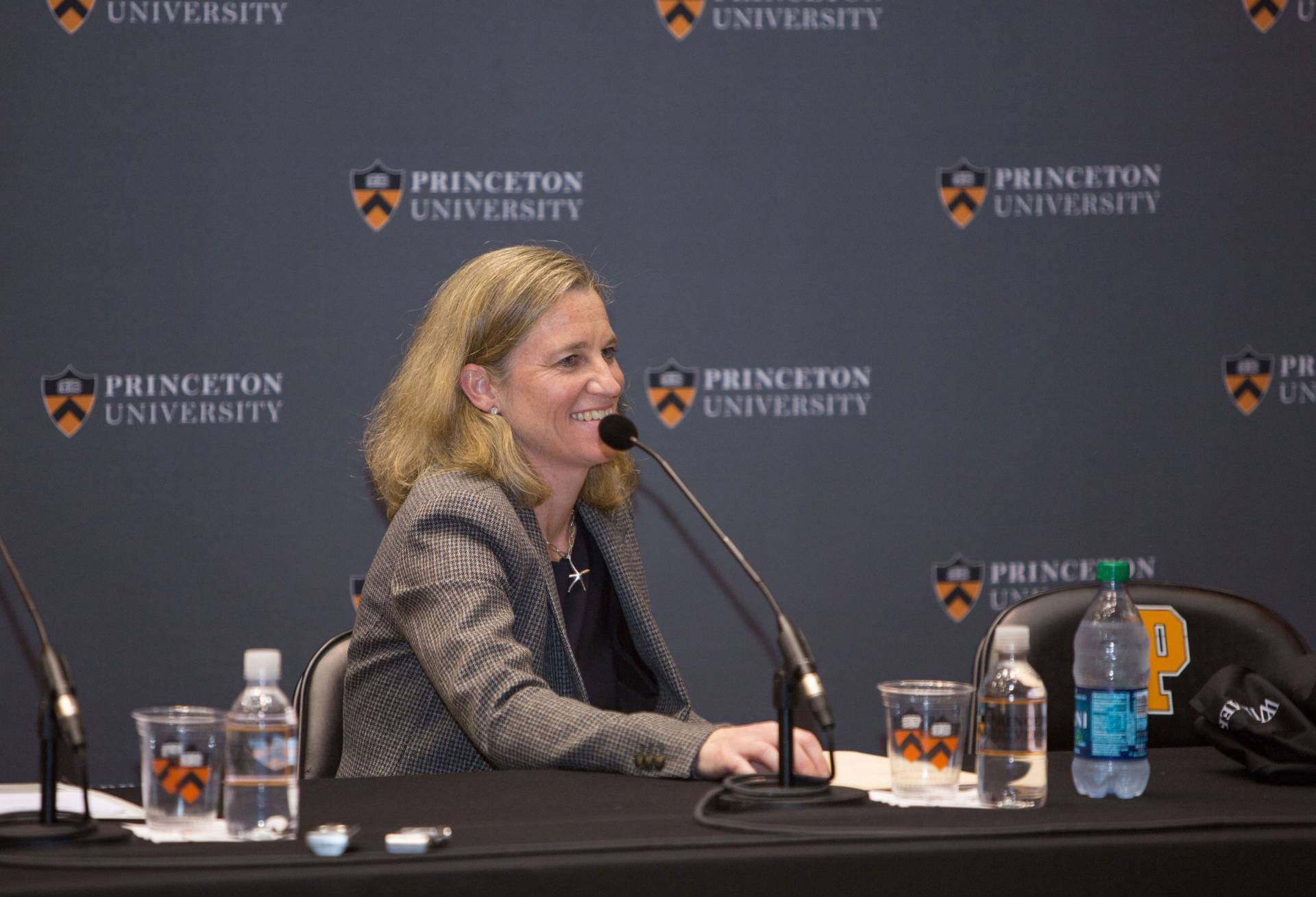 Mollie Marcoux Samaan speaks at a press conference announcing her appointment at Princeton.

Mollie Marcoux Samaan, Class of 1991, who has served as the University’s Ford Family Director of Athletics since 2014, will be leaving Princeton to join the Ladies Professional Golf Association (LPGA) as their ninth commissioner. The University will undertake a national search to identify its next director of athletics.

“Returning to Princeton as the Ford Family Director of Athletics has been a tremendous privilege, and I will deeply miss the amazing students, coaches, administrators, University partners, faculty fellows, alumni, Ivy League and NCAA colleagues, and fans with whom I have had the privilege of working,” said Marcoux Samaan.

“Princeton is and has always been about being a part of a community and a team of people that care deeply about learning and growing. I believe we represent the gold standard of athletics and academic integration with a firm commitment to education through athletics, providing our student-athletes with the tools needed to achieve, serve and lead well beyond their playing days. I am confident that our next leader and our tremendous team of coaches and administrators will continue the legacy of excellence on and off the field for many years to come. I am excited to utilize all that I have learned at Princeton to take on this new challenge and lead the LPGA at such a significant moment for women’s golf, sports and society.”

A recognized leader with a proven record of combining world class scholastic opportunities with top-flight athletics, Marcoux Samaan has built a program at Princeton that has set a national standard for shaping and supporting student-athletes. Under her supervision, Princeton has won 65 Ivy League championships, a total that is more than all other Ivy schools during that time.

Over the course of her tenure, Princeton has been the highest ranked Ivy League school and consistently in the top 40 of all of Division I programs in the Directors’ Cup standings, measuring overall athletic success through NCAA championship participation and success. Princeton’s student-athletes have also excelled in the classroom and in the community during Marcoux Samaan’s tenure. The department’s NCAA Academic Progress Rate has consistently ranked among the best in the nation, and student-athletes have garnered several University and national awards, including the Pyne Prize, Princeton’s highest general distinction conferred on an undergraduate.

“Mollie Marcoux Samaan has served Princeton with distinction over the past seven years,” noted President Christopher L. Eisgruber. “Her tenure will be remembered both for the competitive success of Princeton teams and, more importantly, for the contributions that the University’s athletic programs have made to the education and the lives of our students. Mollie exemplifies, in her life and her leadership, the idea of ‘education through athletics.’ We will miss her even as we take pride in her achievements as she moves on to this new opportunity.”

As a University citizen who embodies Princeton’s commitment to service, Marcoux Samaan’s impact has been felt across campus. Marcoux Samaan has worked tirelessly with campus partners, alumni and members of Tigers’ athletic community to allow the University to reach its goals of education through athletics and competitive excellence. This work has included stewarding major improvements in facilities, recruiting and retaining talented coaches and staff, creating effective fundraising and revenue growth strategies, and increasing the department’s overall exposure. As part of a department-wide strategic plan, she initiated Princeton Tiger Performance, which focuses on the optimal performance of the University’s nearly 1,000 varsity athletes each year, putting in place programs that enable them to reach their fullest potential as athletes, students and citizens.

During the 2020-21 school year, she worked to support student-athletes, coaches and staff through the pandemic and has led with tenacity, empathy and compassion for the many challenges that COVID-19 has brought. She co-chaired Princeton Athletics’ creation of Tigers Together, a comprehensive action plan to create and maintain a culture of mutual respect and unity. This effort empowered current and former student-athletes to use the Tigers’ platforms to combat bias based on gender, sexual orientation, ethnicity, race and all other marginalized identities.

One of Princeton’s all-time great female student-athletes, Marcoux Samaan has also passionately championed the importance and history of women’s sports at the University, from overseeing a series of events marking 50 Years of Women’s Athletics at Princeton to navigating the recent addition of Women’s Rugby to the University’s varsity ranks. These and other efforts have led to recognition throughout the college athletics community, including the recent announcement of Marcoux Samaan as a 2020/2021 winner of the National Association of Collegiate Directors of Athletics (NACDA) Athletics Director of the Year Award.

“I want to thank President Eisgruber, Executive Vice President Treby Williams and Vice President for Campus Life Rochelle Calhoun for providing me with this life-changing opportunity to lead Princeton Athletics,” said Marcoux Samaan. “I know even greater things are ahead for the Tigers.” 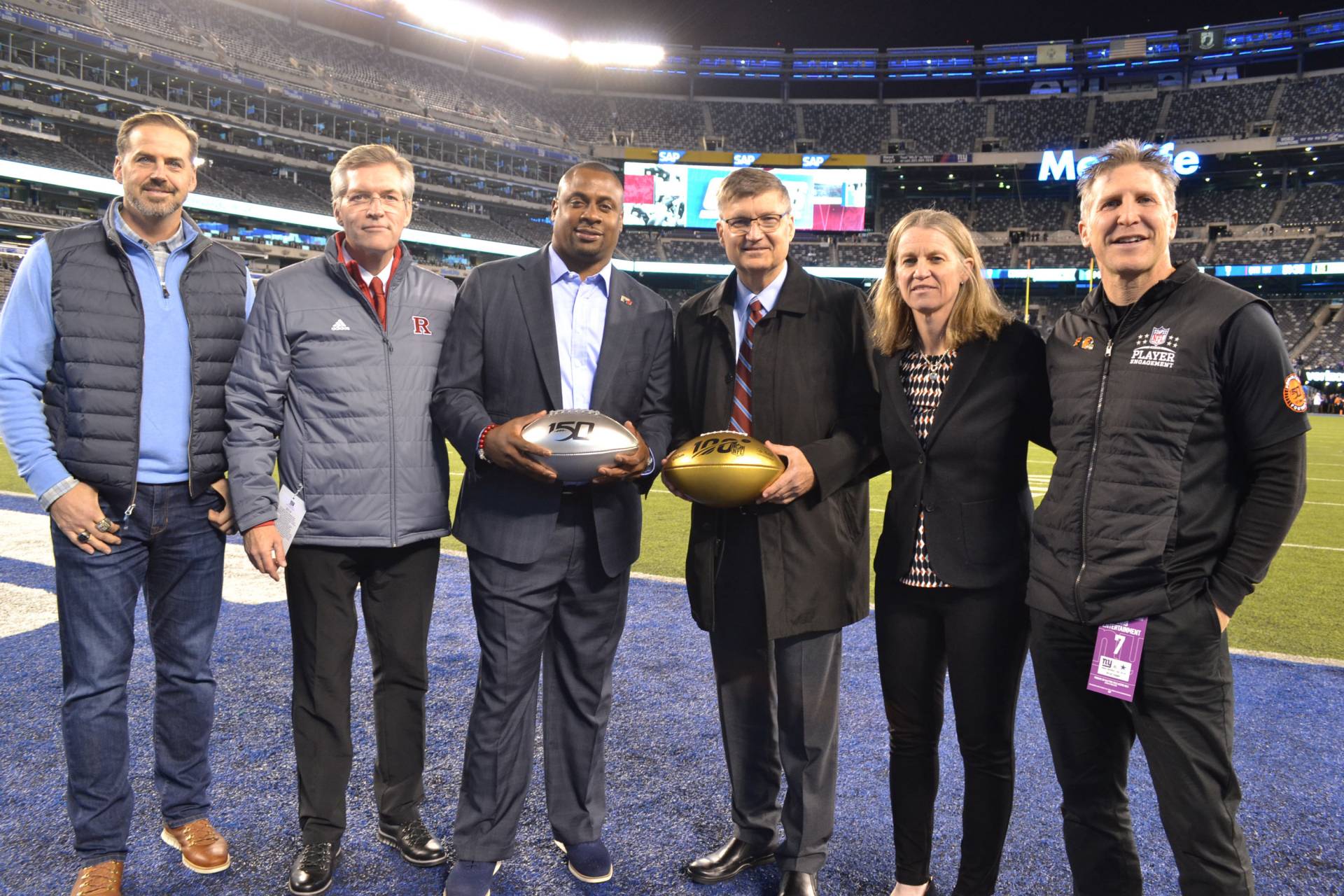 At the Giants vs. Cowboys game on Nov. 4, representatives of Rutgers Football and Princeton Football celebrated the 150th anniversary of college football as well as the 100th anniversary of the National Football League: (From left) Shaun O’Hara, Rutgers Class of 2000; Rutgers Director of Intercollegiate Athletics Pat Hobbs; Executive Vice President of Football Operations for the NFL Troy Vincent Sr.; Executive Director of the College Football 150th Anniversary Kevin Weiberg; Princeton’s Ford Family Director of Athletics Mollie Marcoux Samaan of the Class of 1991; and Keith Elias of Princeton's Class of 1994.

Marcoux Samaan will be working with the University and the LPGA Board to transition to her new role in the months ahead, and Princeton University will undertake a national search to identify Marcoux Samaan’s successor. Parker Executive Search, a national and international leader in helping colleges and universities to find excellent candidates for athletic directors, has been engaged to help with the search. Daniel Parker, vice president and managing director for the sports division, and Delania Jordan, associate, will work closely with a search committee to conduct the search.

Founded in 1950, the LPGA is one of the longest-running women’s professional sports associations in the world, having grown from its roots as a playing tour into a nonprofit organization involved in every facet of golf. Serving as the face and voice of the association, the Commissioner works closely with the LPGA’s board to lead the organization in all strategic business and management functions.