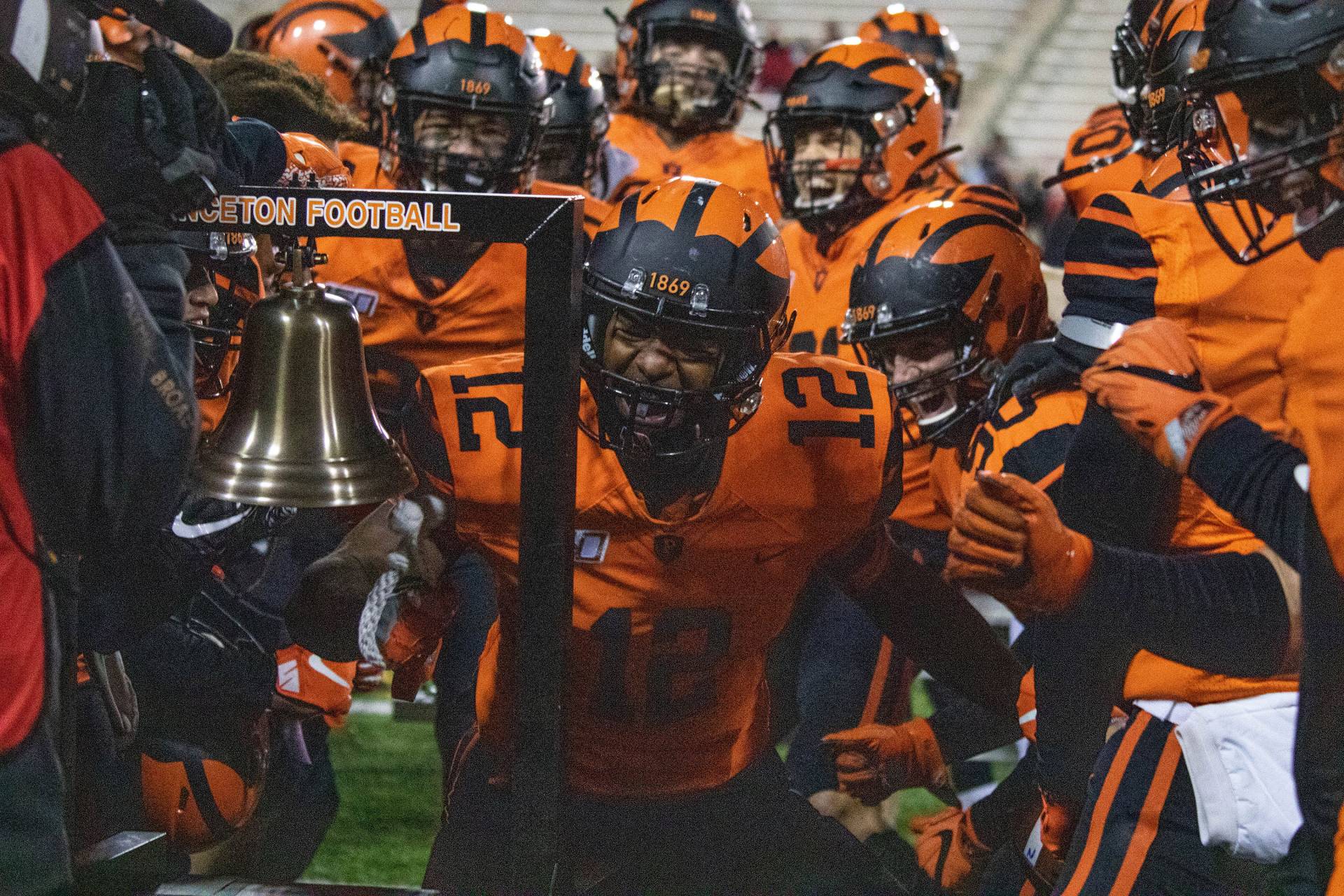 Princeton defensive back Sultaan Shabazz, Class of 2021, rings a bell in celebration of generating a turnover during the Nov. 1 game against Cornell. A new tradition in 2019, the bell is rung every time a Princeton player recovers a fumble or records an interception.

One hundred and fifty years ago, on Nov. 6, 1869, a tradition unlike any other began — college football, first played between Princeton and Rutgers students.

The game was played on the New Brunswick campus of Rutgers and more closely resembled what we know today as soccer — and was even played with a round, rubber ball. Rutgers won the game 6-4, while Princeton would go on to win the next 31 rematches.

“Ever since I played here, everyone in the program has always talked about our place in having played the first game and taken great pride in it,” said Bob Surace of the Class of 1990, who is Princeton’s Charles W. Caldwell Jr. ’25 Head Coach of Football.

“Now that we’re at the actual anniversary, it’s even more special,” said Surace, a three-time Ivy League Coach of the Year who is one of only two people to have won an Ivy League championship as both a player and a head coach.

Over time, the Princeton Tigers have celebrated many major historic moments of the game while fueling University spirit. Highlights include:

While the game itself has changed along with the helmets, uniforms, fields and equipment, the feeling of excitement to put on an orange and black uniform remains.

“I could never put into words what playing football for Princeton means to me,” said running back Ryan Quigley, a senior. “It has been a life-changing experience, and I have met some incredible people along the way.”

Jeremiah Tyler, a junior, shares the sentiment: “It feels like I’m a part of history now. To even be classified as a Princeton student-athlete is unbelievable, I’m very appreciative of the opportunity to play the game I love as a Princeton Tiger."

The Tigers continue traditions that have been going on for decades.

“I love how the players sing to the band after each game,” said Surace of his favorite tradition. “And, of course, the bonfire if we beat Harvard and Yale in the same season … I love how these traditions get passed down from generation to generation of Princeton football alumni.”

Throughout the week, these traditions are being celebrated on and off the field.

On Monday night, Ford Family Director of Athletics Mollie Marcoux Samaan, Class of 1991; executive associate director of athletics Anthony Archbald; and former Princeton football player and New York Giants legend Keith Elias, Class of 1994, were recognized along with their Rutgers counterparts as part of the Monday Night Football ceremonies between the Giants and the Dallas Cowboys. The Cowboys are coached by another Princeton football alumnus, and former teammate of Surace, Jason Garrett, Class of 1989.

On Saturday, Nov. 9, Princeton will celebrate the anniversary of that first game while playing Dartmouth in a one-of-a-kind game at Yankee Stadium. Throughout the game, Princeton will recognize its football history with various on-field moments and videos, while the Princeton Band will play a joint halftime show with the Dartmouth Band.

“We are all so proud to represent the orange and black and this University in Yankee Stadium for the 150th year of college football,” said Quigley.

The game has larger implications for the season, too, as both teams are coming into the game undefeated.

“The team is very excited to play in Yankee Stadium this weekend — but this game will be treated with the same attitude as every other game,” said Tyler. “Each game brings us one step closer to our goal.”

The goal? Another Ivy League Championship — and maybe even back-to-back perfect seasons.

“We’re obviously very competitive and love to win games and championships, that goes without saying,” said Surace. “Mostly, though, I love the fact that every day, I get to see students grow, not only their athletic and academic muscles, but also those that are needed to successfully transition from what we’re doing here into a world that will challenge them and make them draw on what they learned here.”

Get tickets and additional information about the Princeton Football game against Dartmouth at Yankee Stadium on Nov. 9.