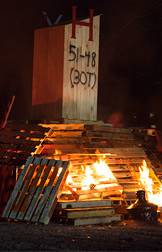 Flames begin creeping up a pyre of pallets Sunday night toward an outhouse recording the scores of Princeton's football victories over Harvard and Yale. The bonfire tradition, dating to the late 1800s, is renewed each year the Tigers defeat the Crimson and the Bulldogs.

Flames begin creeping up a pyre of pallets Sunday night toward an outhouse recording the scores of Princeton's football victories over Harvard and Yale. The bonfire tradition, dating to the late 1800s, is renewed each year the Tigers defeat the Crimson and the Bulldogs.

Princeton celebrated football victories over Harvard and Yale by lighting a bonfire Sunday that sent flames and smoke curling skyward on a frigid evening.

"A raw, cold November night like this one always puts me in the mood for a bonfire," President Christopher L. Eisgruber said as he stood on platform behind Nassau Hall and faced a cheering circle of Princetonians ringing Cannon Green.

"We're going to have a bonfire tonight because of this very special team," said Eisgruber, pointing to the football players, who finished the season with an 8-2 record. The Tigers earned the right to a bonfire, a tradition dating to the late 19th century, by sweeping the Crimson and the Bulldogs.

The team "brought home an Ivy League championship to this campus, where it belongs," said Eisgruber, wrapped in a long orange and black scarf.

After remarks by Ford Family Director of Athletics Gary Walters, Charles W. Caldwell Jr. '25 Head Coach of Football Bob Surace and students and team members, players escorted by firefighters touched torches to the base of the pyre by the cannon on the green. The pyre, topped by an outhouse recording the scores of the Harvard and Yale games, took a few minutes to catch fire. Soon, flames swirled and wood crackled. The crowd roared as the outhouse was consumed and its framework toppled into the pile.

Students, bundled in heavy coats and layered in hooded sweatshirts and jackets, snapped photos and took videos with their cameras and mobile phones. For sophomores, juniors and seniors, it was a second consecutive fall celebrated with a bonfire. While students in 2012 collected funds for victims of Hurricane Sandy, this year they collected donations to benefit relief efforts for victims of Typhoon Haiyan in the Philippines.

As the day began, there was some question whether the fire would be lit because of high winds. University and town of Princeton officials monitored forecasts and conditions during the day and by early evening decided to proceed as planned. Only a mild breeze was blowing as the ceremony began shortly after 7 p.m. The temperature was a brisk 25 degrees. 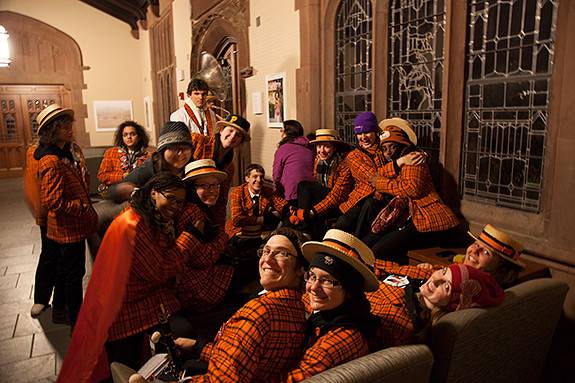 Members of the band huddle for warmth in Chancellor Green before heading out into the cold, 25-degree air. 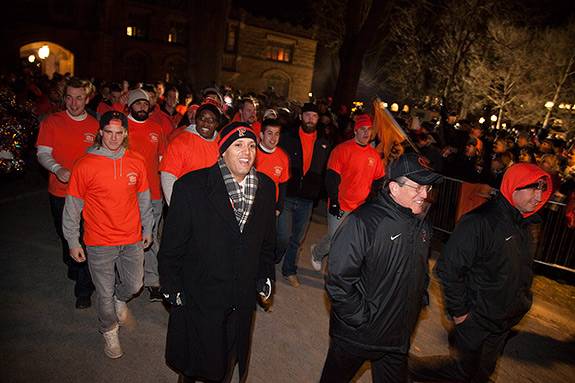 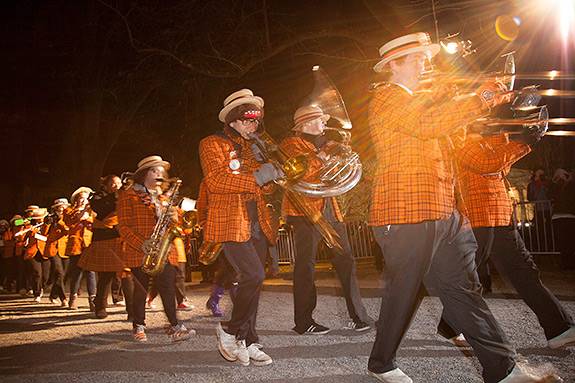 With the brass section blaring, the band enters Cannon Green while playing "Going Back to Nassau Hall." The band played for about an hour during the bonfire ceremony. 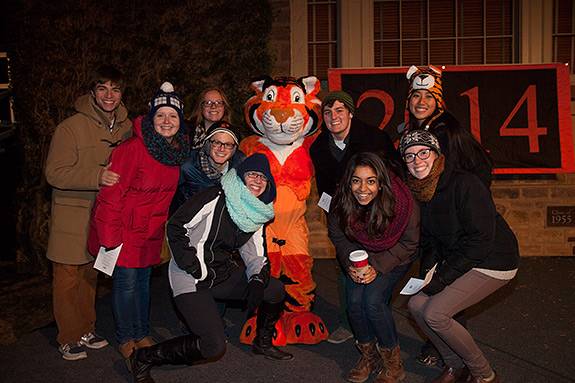 Students bundled against the cold pose for a photo with the Princeton tiger mascot. 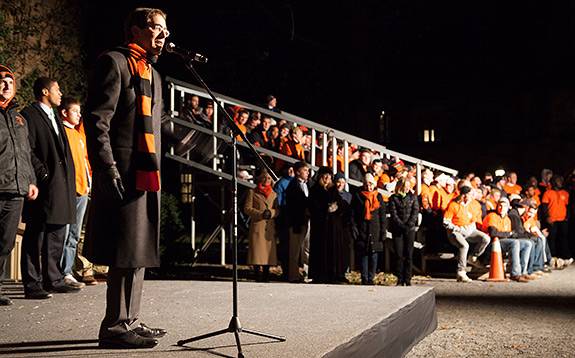 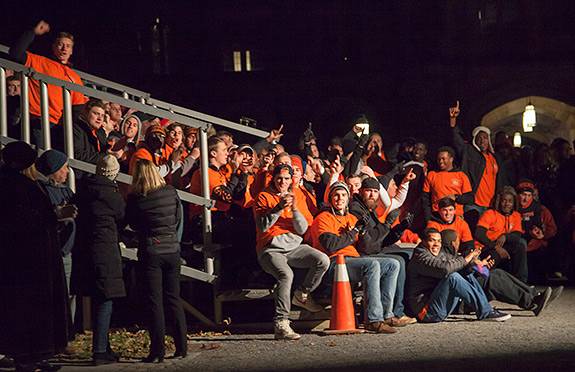 Members of the Tiger football team whoop and cheer as they are recognized for their victories over Harvard and Yale that earned campus Sunday's traditional bonfire.

Princeton students ring Cannon Green on Sunday, Nov. 24, as a bonfire roars in celebration of the Tiger football team's victories over Harvard and Yale. The temperature was a chilly 25 degrees, but the flames warmed up the crowd. 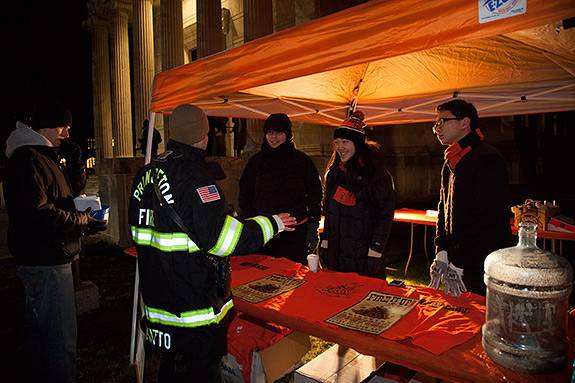 A Princeton firefighter chats with students raising money to aid relief efforts in the Philippines, where people are recovering from the devastation of Typhoon Haiyan. 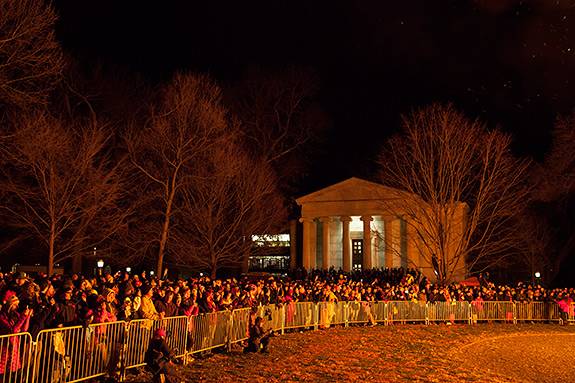 Students and others ring the fire circle at Cannon Green and watch the bonfire blaze. 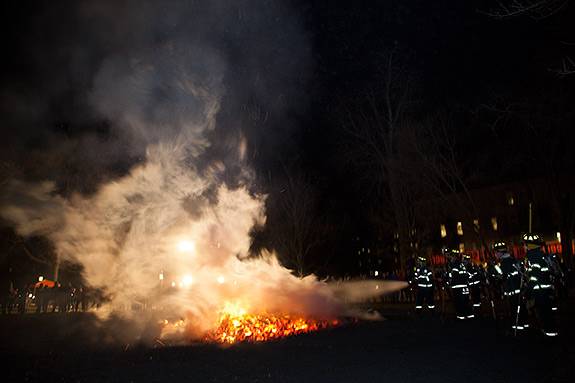 After the pyre burned near to the ground, Princeton firefighters move in to extinguish the bonfire.