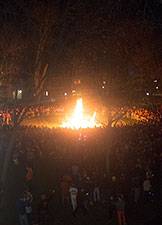 The Princeton University community is celebrating the achievements of its football team this fall with a bonfire on Cannon Green, to be lit in a ceremony beginning at 7 p.m. today. This is the second year in a row Princeton has swept Harvard and Yale in football in a season, leading to the bonfire, a campus tradition that dates to the late 1800s.

As the day began, there was some question whether the fire would be lit because of high winds. University and town of Princeton officials monitored forecasts and conditions during the day and by 5 p.m. decided to proceed as planned.

At the bonfire, student groups will be raising funds to benefit relief efforts for victims of Typhoon Haiyan in the Philippines.

The football team comiled an 8-2 record on the year to share the Ivy League title with Harvard. The Tigers lost their final game 28-24 Saturday at Dartmouth.

Photos and videos from selected bonfires since 1897 are available online through University Archives at the Mudd Manuscript Library.

Mudd Manuscript Library's archives include the construction of the "Championship Fire of 1901."