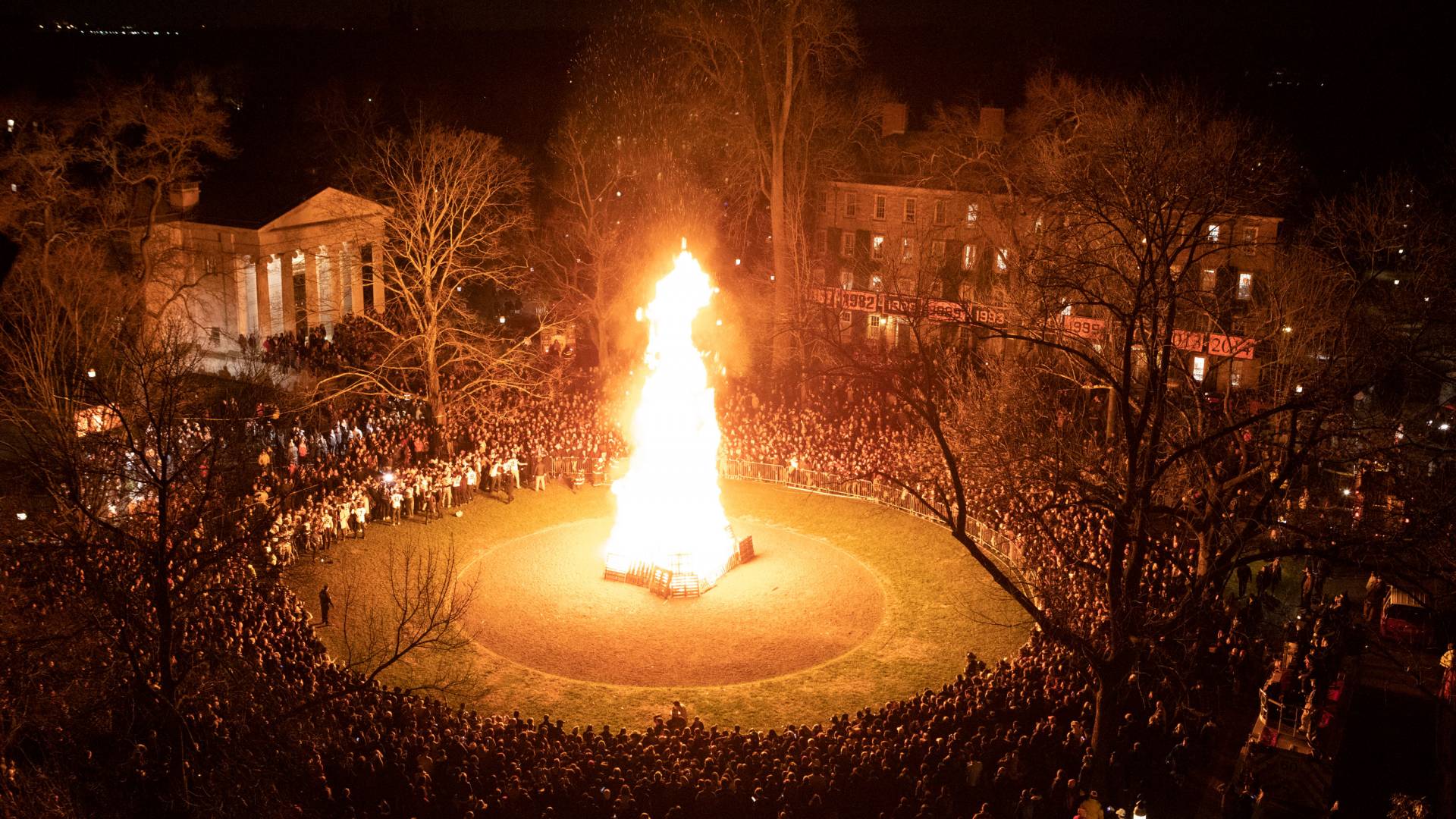 The University community honored the Princeton football team for its victories over Harvard and Yale and its undefeated season with a traditional bonfire on Cannon Green Sunday night. The banners for other classes that celebrated bonfires hung on Morrison Hall, at right.

Every year that the Princeton University football team defeats both Harvard and Yale, a celebratory bonfire is held on Cannon Green – a tradition dating back to baseball victories in the late 1800s.

The 2018-19 football squad took it one step further, garnering victories over every team they faced this season, finishing with a perfect 10-0 record for the first time in 54 years and securing an Ivy League championship. The last bonfire was held in 2013. 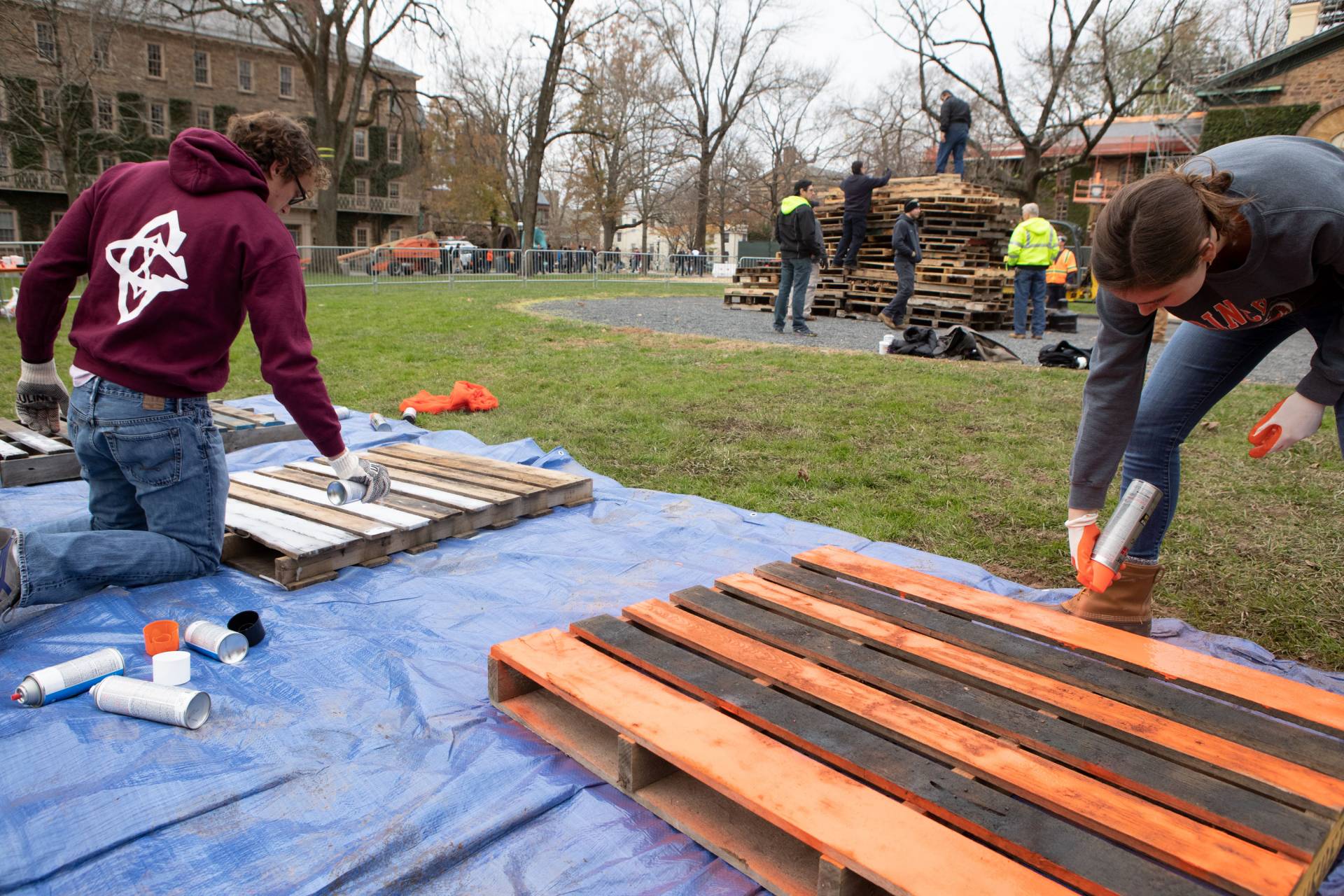 Before the bonfire, students spray paint wood pallets with Princeton’s school colors and messages for their rivals.

Students, faculty, staff, administrators and alumni gathered around Cannon Green at 7 p.m. Sunday, making a large circle around a pile of painted pallets that students decorated throughout the day. Once everybody was in place, the celebration began.

The Princeton University Band, cheerleaders and football team walked around the pile, greeting fans and thanking them for coming to the event in the sub-40-degree weather.

"It’s exciting," Ramakrishnan said of the football team’s victories and the bonfire. "It’s a pretty big spectacle and they put on a big show." 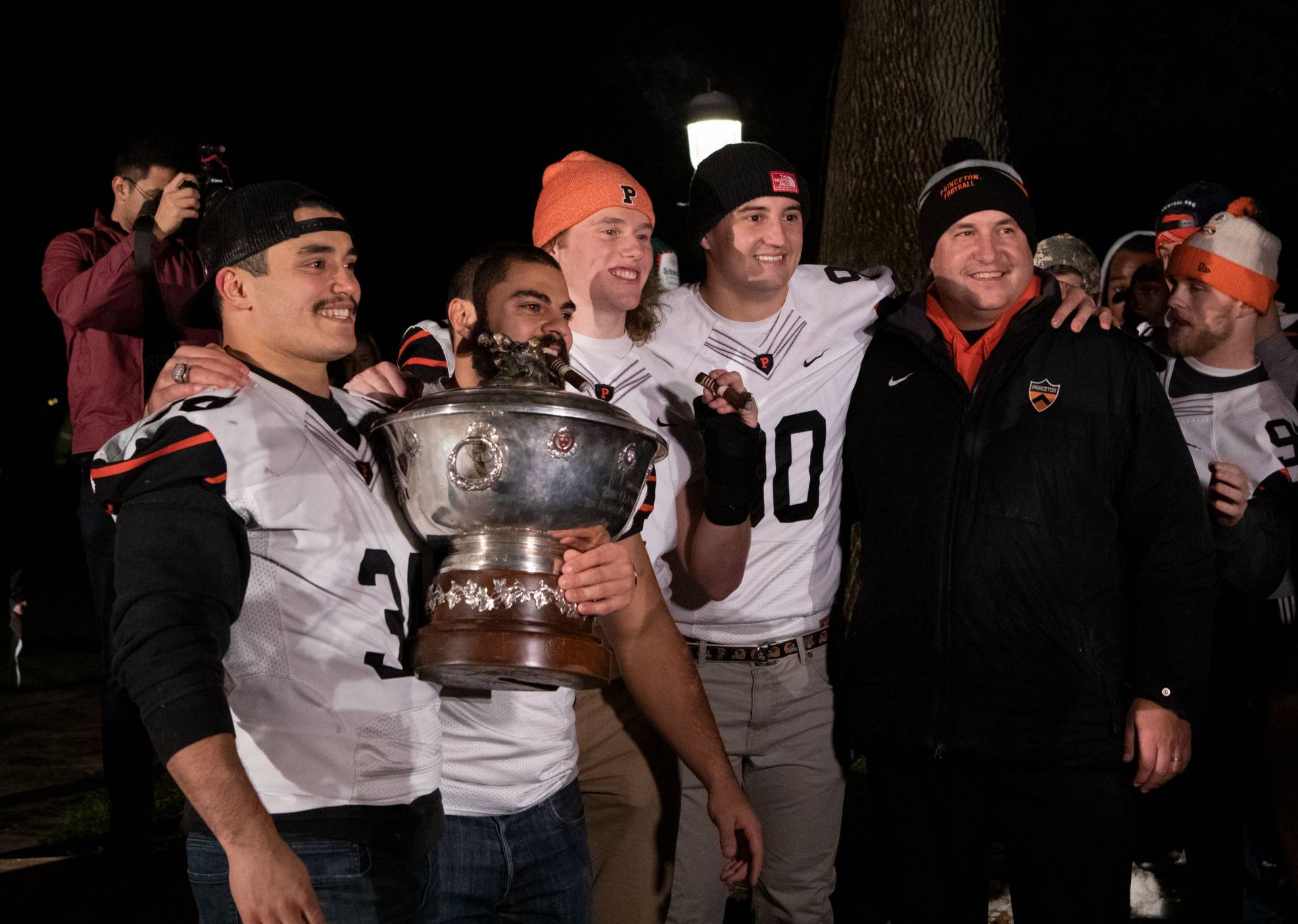 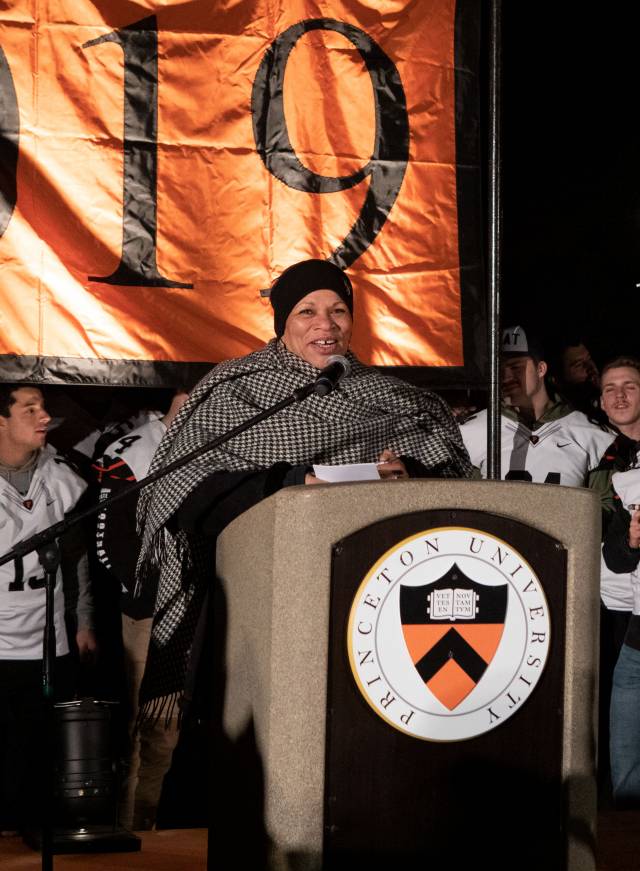 Vice President for Campus Life Rochelle Calhoun congratulates the Princeton football team on its undefeated season and thanks the team for bringing the University community together.

“I want to thank the team for bringing the community together,” said Calhoun. “Like all of our teams, Princeton football brings us together to be one Princeton.”

Once the football team raised up the Ivy League championship trophy, captains from other Ivy League-winning teams at Princeton came on stage to lead a special bonfire locomotive chant.

Aided by members of the Princeton, Plainsboro, Hopewell and Lawrence fire departments, as well as the Princeton First Aid and Rescue Squad and Princeton University Department of Public Safety, the co-captains began to light the bonfire as cheers from the crowd resounded at the sight.

Wearing an orange Princeton sweatshirt, senior Devin Kilpatrick raised his phone above his head for a clear shot of the orange flames. Kilpatrick traveled to the Yale game that cinched the bonfire.

"It’s really impressive that they accomplished this — they’re top-tier athletes and Princeton students" keeping up with classes, Kilpatrick said. "I’m happy I got to see [a bonfire] as an undergrad. And it’s so rare to have thousands of students come out for an event like this. … It’s an opportunity to bring the community together and celebrate all that Princeton is."

As the flames rose higher and higher, the band played on and the football team brought the Ivy League championship trophy around, with thousands of Princetonians joining in to celebrate their perfect season. 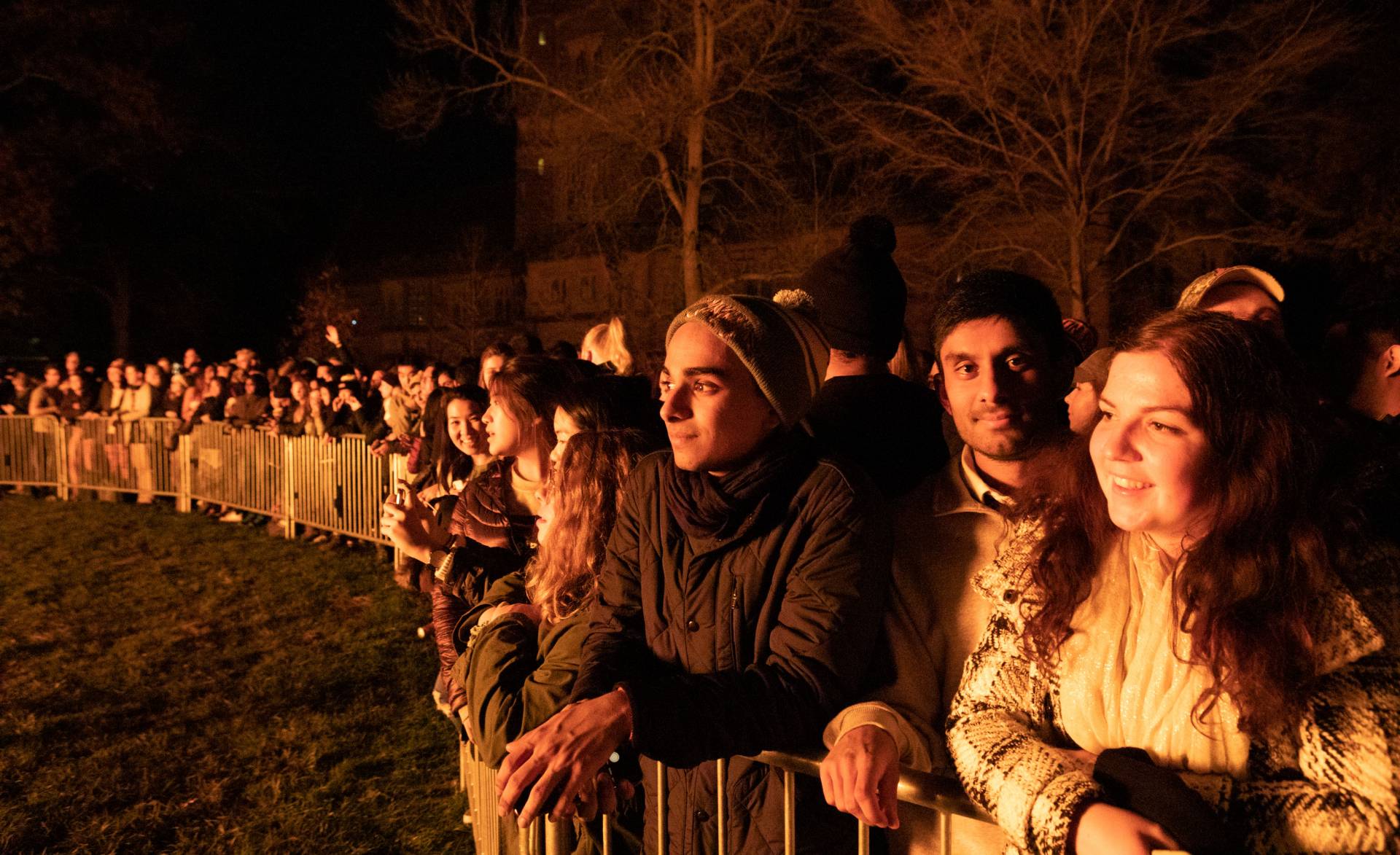 Thousands of students, faculty, staff and alumni filled Cannon Green to celebrate the football team’s accomplishments with a warm fire on a chilly night. 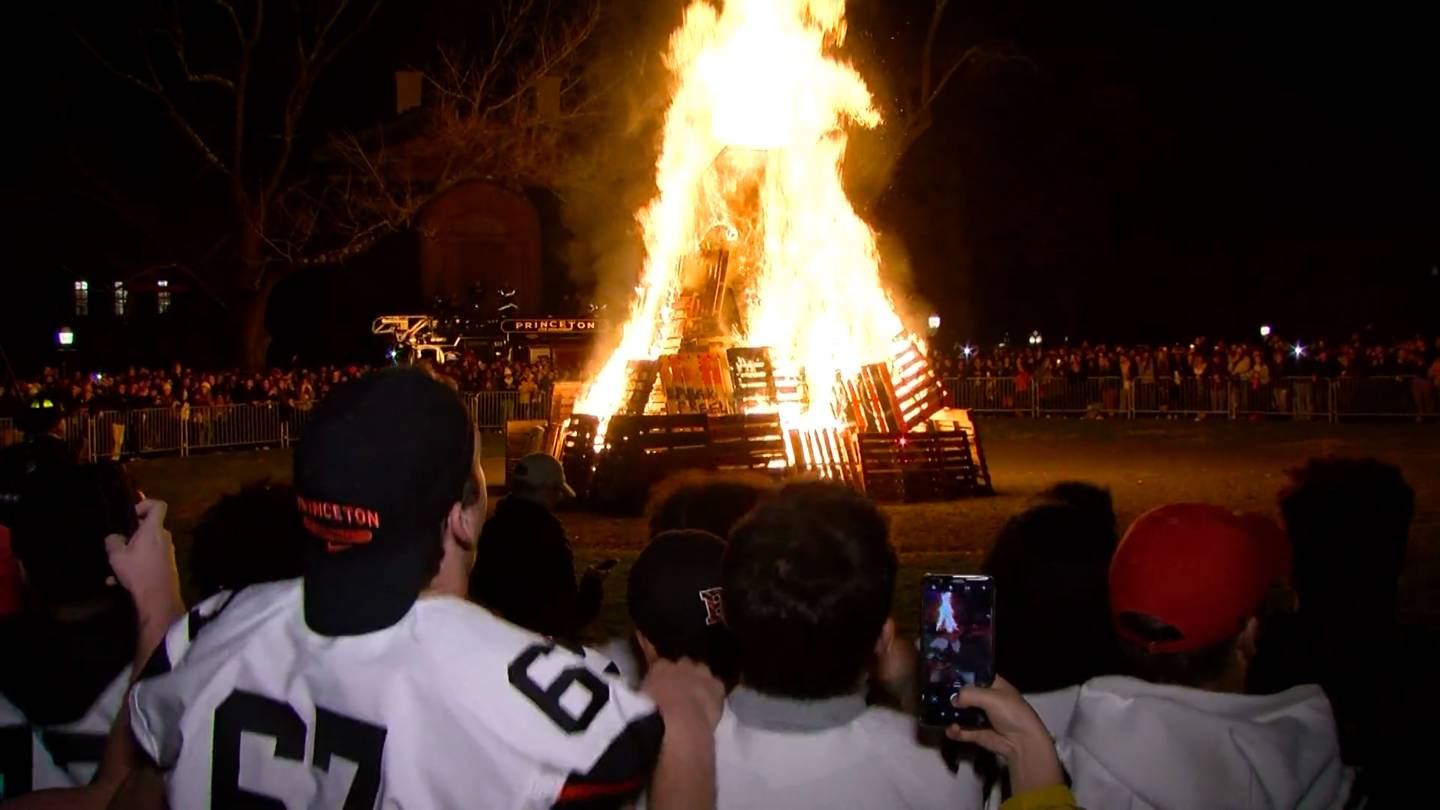 With speeches and cheers, signs and flames, the Princeton community celebrated the football team with a bonfire.