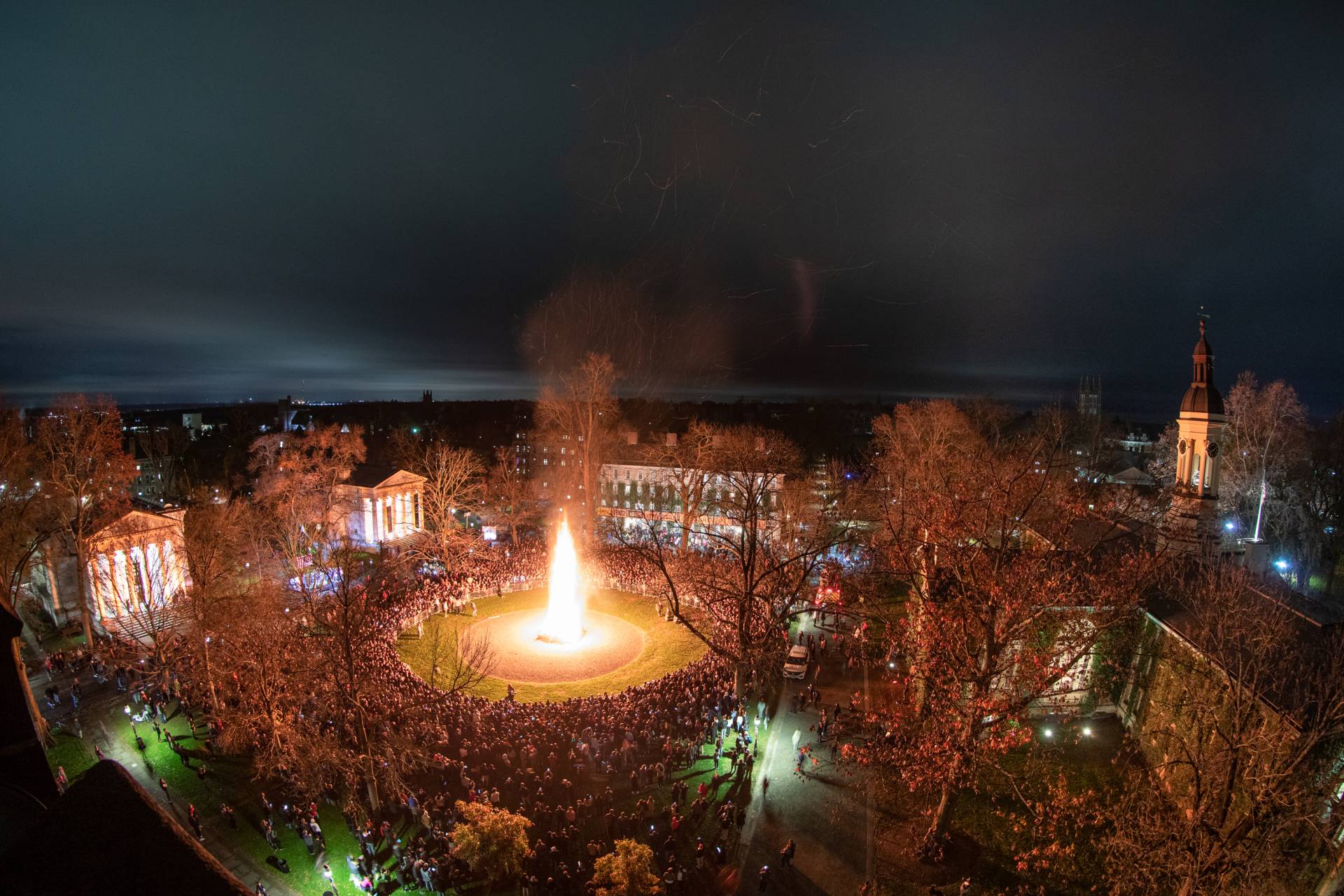 Maddy Pryor, Office of Communications
Photo by
Sameer A. Khan/Fotobuddy

The Princeton community came together Sunday on Cannon Green to celebrate Princeton football's victories over Harvard and Yale – along with its share of the Ivy League championship -- with a traditional bonfire that many in attendance called a happy return to community as COVID-19 restrictions have eased.

“It’s been great to have everyone back on campus this fall,” President Christopher L. Eisgruber told the crowd, "and it is fantastic to have you all out here this evening for one of the most memorable traditions at Princeton University: the bonfire.”

The event began early Sunday as each undergraduate class took to Cannon Green with paint and wooden pallets, decorating the wood with the scores of both winning games -- Princeton: 18, Harvard: 16, and Princeton: 35, Yale 20 -- and other embellishments. As the temperature dropped and the sun set, the crowd gathered as the Undergraduate Student Government handed out hot chocolate, posters and t-shirts.

Cheerleaders’ chants, a DJ set by University Spokesperson Ben Chang, and the sounds of the Princeton University Band rang out across the green to welcome hundreds of students, alumni, faculty, staff and local community members. 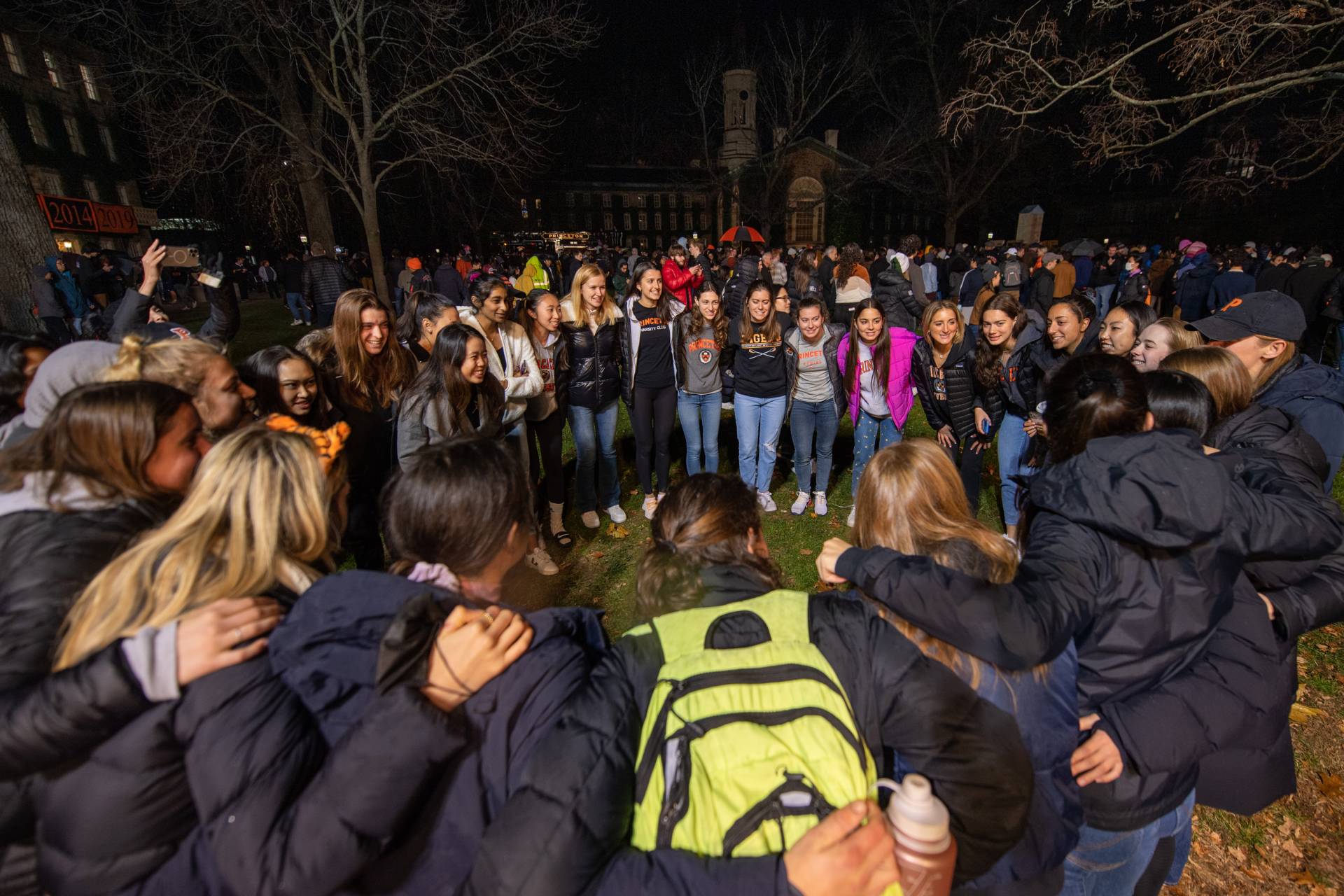 The program began with Mitchel Charles, Class of 2018 and program coordinator in the Office of the Dean of Undergraduate Students, who had organized the event. “As an alumnus, there’s been a distance since the last two Reunions weren’t in-person,” he said before taking the stage. “This feels like one of the first opportunities for the entire Princeton community to come back to campus, in person, and it’s great that it’s for one of the most fun, upbeat traditions.”

Eisgruber took the podium next to welcome everyone. He praised the football team’s “tenacious defense” and “explosive offense” and congratulated the players, the coaching staff and the “team around the team” for bringing home the Ivy League trophy.

“Thank you, Tigers, for the excitement, the excellence and pride that you have brought to our campus this season,’ he said, “and thank you for giving this community the occasion to come together tonight.” 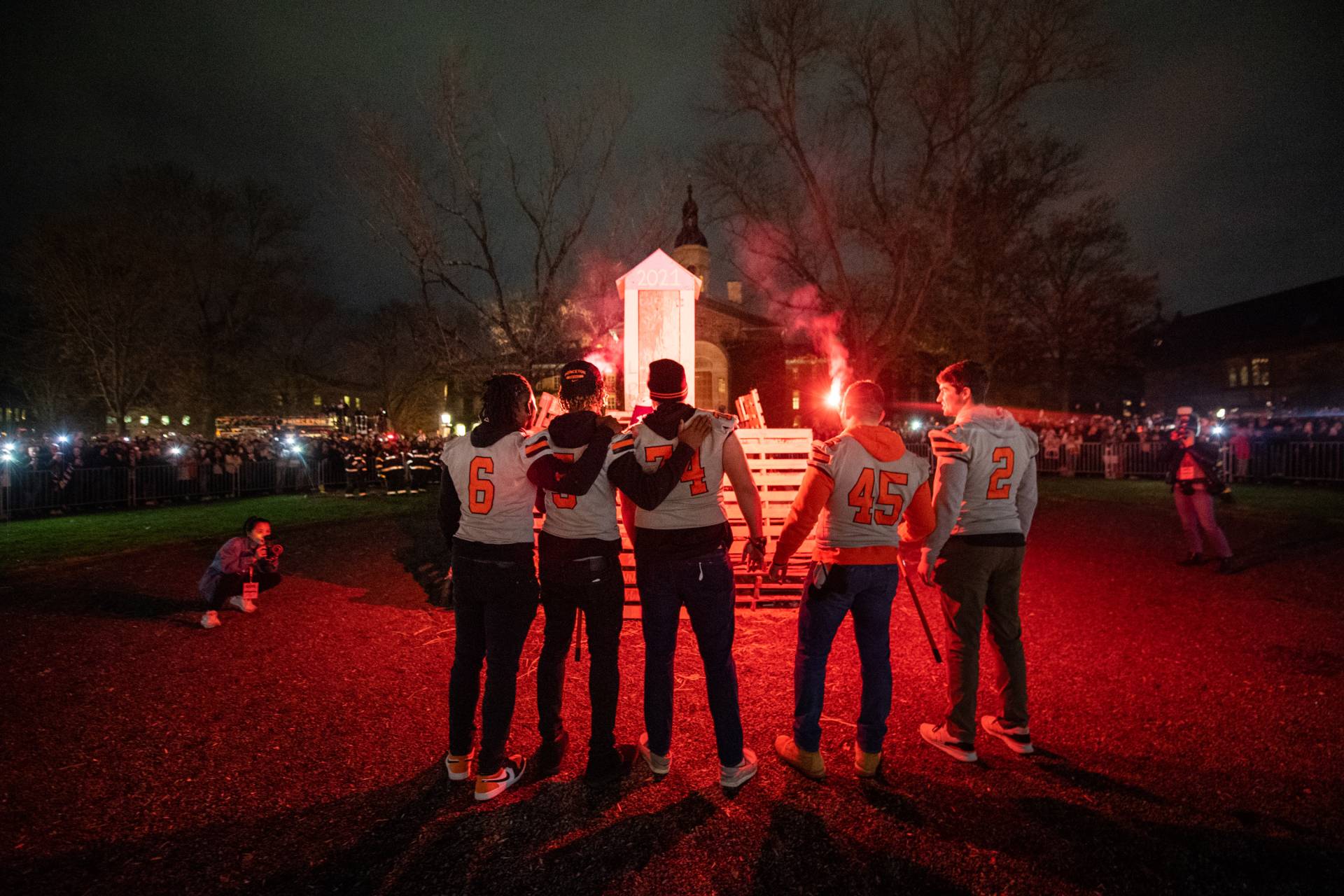 The bonfire crowd heard next from senior Christian Potter, president of the Undergraduate Student Government, and from the Class of 2022 president, Santiago Guiran.

Potter spoke about having missed football games and other student gatherings during the pandemic, saying, “Let the lighting of this bonfire be the ultimate re-ignition of community.”

Guiran noted that the Class of 2022 started their time as students with a bonfire in 2018 and are ending with another one. He encouraged students to have fun Sunday night, and to not worry about academic expectations until Monday morning.

Attending  his first bonfire as athletic director, John Mack, Class of 2000, honored the women’s lightweight rowing team, one of the few Ivy League teams to compete in the spring of 2021, for their national championship. They led the crowd in a traditional locomotive chant.

In addition to recognizing the football and rowing teams, Mack spoke to the success of Princeton’s student-athletes this fall. Four teams won conference titles this semester, five reached the NCAA tournament, and all nine fall sports teams earned first or second place in their conference.

“There’s not a school in this league that can rival that kind of broad athletic success. It’s a result of the hard work and dedication of our coaches, our student-athletes and their supporting teams — but it’s also a direct reflection of the Princeton student body and the Princeton University community,” said Mack. 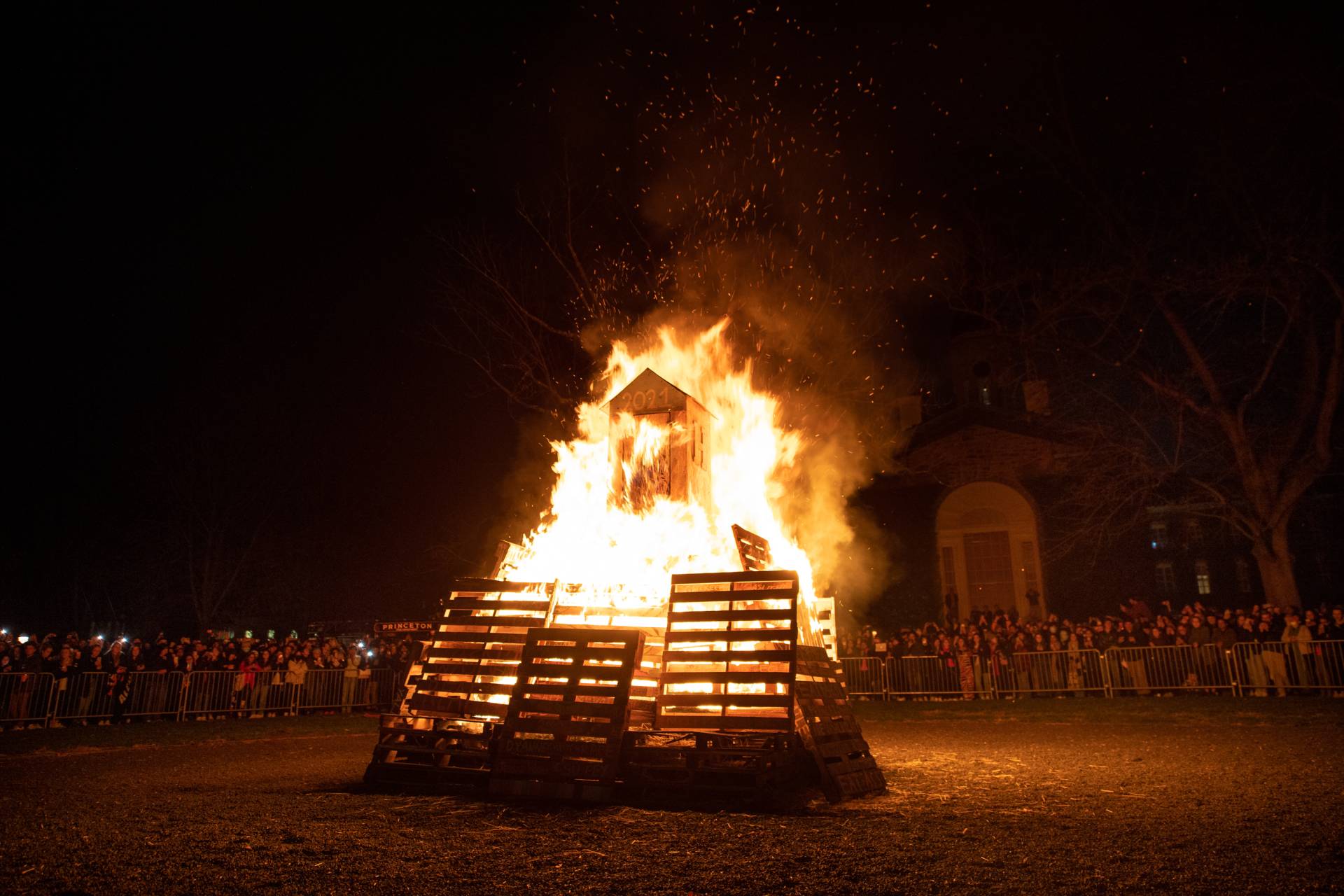 Grace Stone, a junior from Glen Cove, New York, majoring in African American Studies, watched the program from the crowd alongside her teammates on the women’s basketball team. “The last year-and-a-half has been an extremely hard time for all of us, especially for student-athletes who haven’t been able to connect with each other and play the sports that they love," Stone said, "so it’s super exciting to see everybody come together.”

The next speaker was Charles W. Caldwell Jr. ’25 Head Coach of Football Bob Surace, Class of 1990, who was met with raucous applause and cheers from his players. He expressed his gratitude for the season-long support from the University community, saying “Every single home game our students, our community, our alumni, our faculty showed up and brought the energy so we could win.”

In bonfire tradition, three captains of the team that was the last to earn a bonfire returned to campus to hand off the torch — literally — to this year’s squad. The Class of 2019’s Tom Johnson, Kurt Holuba and John Lovett were all on hand to give the torch to the 2022 senior captains. Under the careful direction of Princeton Fire Marshal Scott Loh, they started the fire.

“It was so amazing and absolutely jaw-dropping to see the fire go so high and to see so many people participating. You could feel how proud and happy everyone was,” said Angela Challman, a first-year student from Naples, Florida, studying neuroscience.

Princeton senior linebacker Jeremiah “JT” Tyler, a sociology major from Detroit, added, “There’s no better way to celebrate a championship than with your family.”

Watch the bonfire in its entirety here on Facebook. 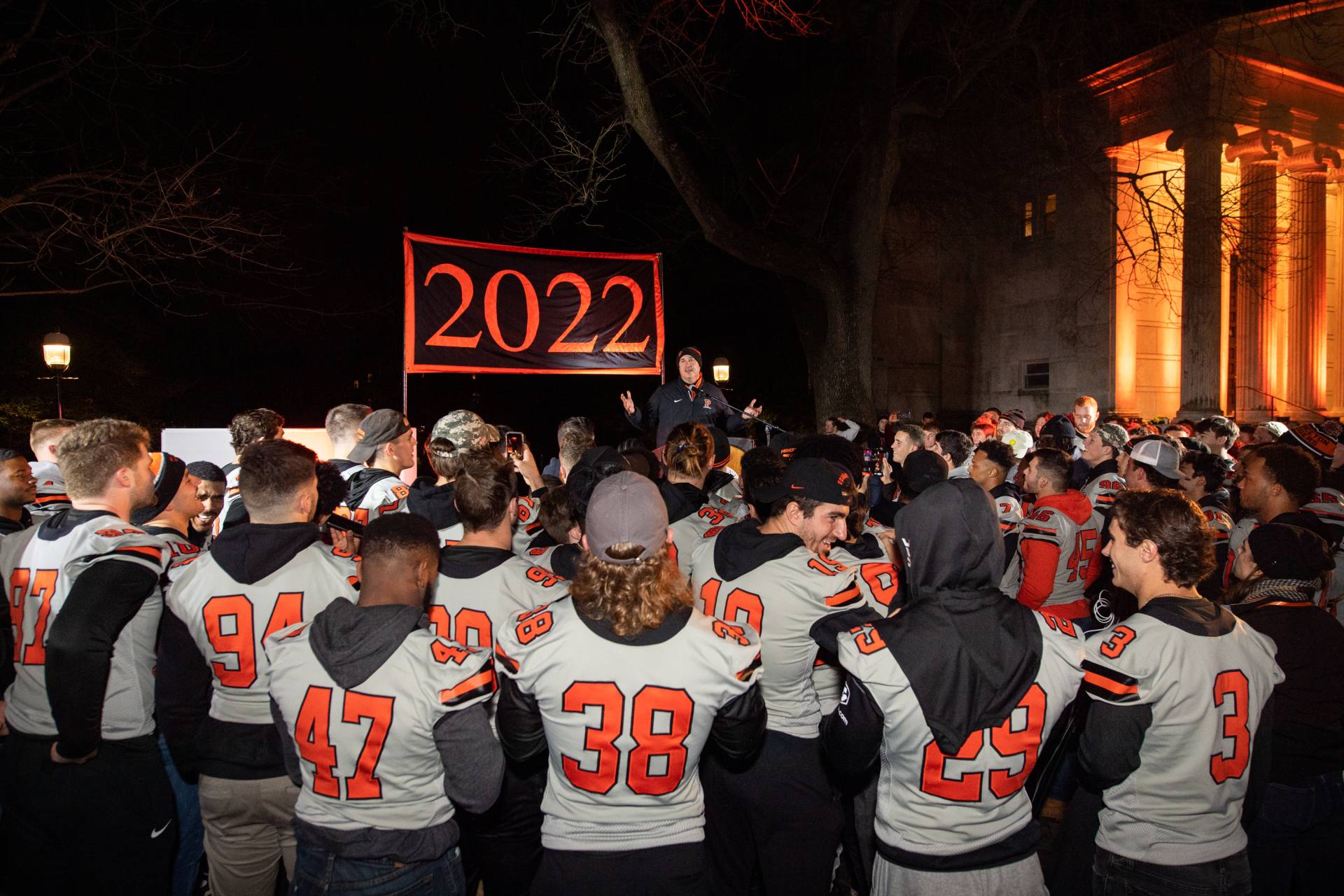