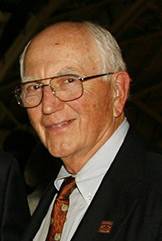 Dick Kazmaier, a legendary football player and member of Princeton University's Class of 1952, died Thursday, Aug. 1, in Boston. He was 82.

Kazmaier, the 1951 Heisman Trophy winner and a 1966 inductee into the College Football Hall of Fame, has had a storied place in Princeton athletics since his days as an undergraduate, when he led Princeton to the 1950 national championship. He is Princeton's only Heisman Trophy winner, and the most recent of three in Ivy League history to win football's most prestigious honor.

"Today Princeton University, the Tiger Athletic Program and Tiger Nation are mourning the loss of Dick Kazmaier '52, one of our most accomplished student-athlete icons of the 20th century," said Director of Athletics Gary Walters. "In addition to having won the Heisman, #42's most enduring trait for me was that he also was a dignified 'Wise Man.'

"Notwithstanding all of the achievements in his athletic, business and philanthropic endeavors, Dick remained one of the most self-effacing individuals I have ever met," added Walters. "He never sought the spotlight and always led in a thoughtful and ethical manner."

From the small town of Maumee, Ohio, Kazmaier emerged as an exceptional player as his time at Princeton progressed. As a junior and senior, he led Princeton to undefeated seasons, and by the time he graduated, he was Princeton's all-time leader in rushing (1,950 career yards) and ranked second in passing (2,404 career yards).

In the 1951 season, Kazmaier led the nation in both total offense and passing accuracy; arguably his greatest performance came in a 53-15 win over then-unbeaten Cornell. He completed 15 of his 17 passes for 236 yards and three touchdowns and ran for another 124 yards and two more scores.

Featured on the cover of Time Magazine that year, Kazmaier went on to win the Heisman Trophy in a landslide.

He had the opportunity to play at the professional level — the Chicago Bears drafted him — but the psychology major made up his mind to attend Harvard Business School. Following a three-year stint in the Navy, he returned to the business world and was another remarkable success. He eventually founded Kazmaier Associates, Inc., a Concord, Mass., firm that has invested in, managed and consulted for sports marketing and sports product manufacturing and marketing businesses since 1975.

Kazmaier's legacy remains with the University, which retired the number "42" during the fall of 2008; the number was also worn by Bill Bradley, the basketball Hall of Famer and a member of the Class of 1965. A statue of the 1951 Heisman Trophy winner rests outside Jadwin Gym.

A friend to both the University and the football program throughout his life, Kazmaier spent time as a University trustee, as well as a member of the Princeton Varsity Club Board of Directors.

Kazmeier is survived by his wife, Patricia, and five daughters: Kathy Donnelly; Kristen Kazmaier Fisher; Michele Kazmaier; Susan Kazmaier, a 1981 Princeton alumna; and Kimberly Picard, a 1977 Princeton alumna. Another daughter, Patricia (Patty) Kazmaier, graduated from Princeton in 1986 and died in 1990; the Patty Kazmaier Memorial Award is presented annually to the top player in NCAA Division I women's ice hockey.

For a more detailed profile of Kazmaier, visit the Department of Athletics website. The Mudd Manuscript Library also has historic footage of Kazmaier and the football team in action.