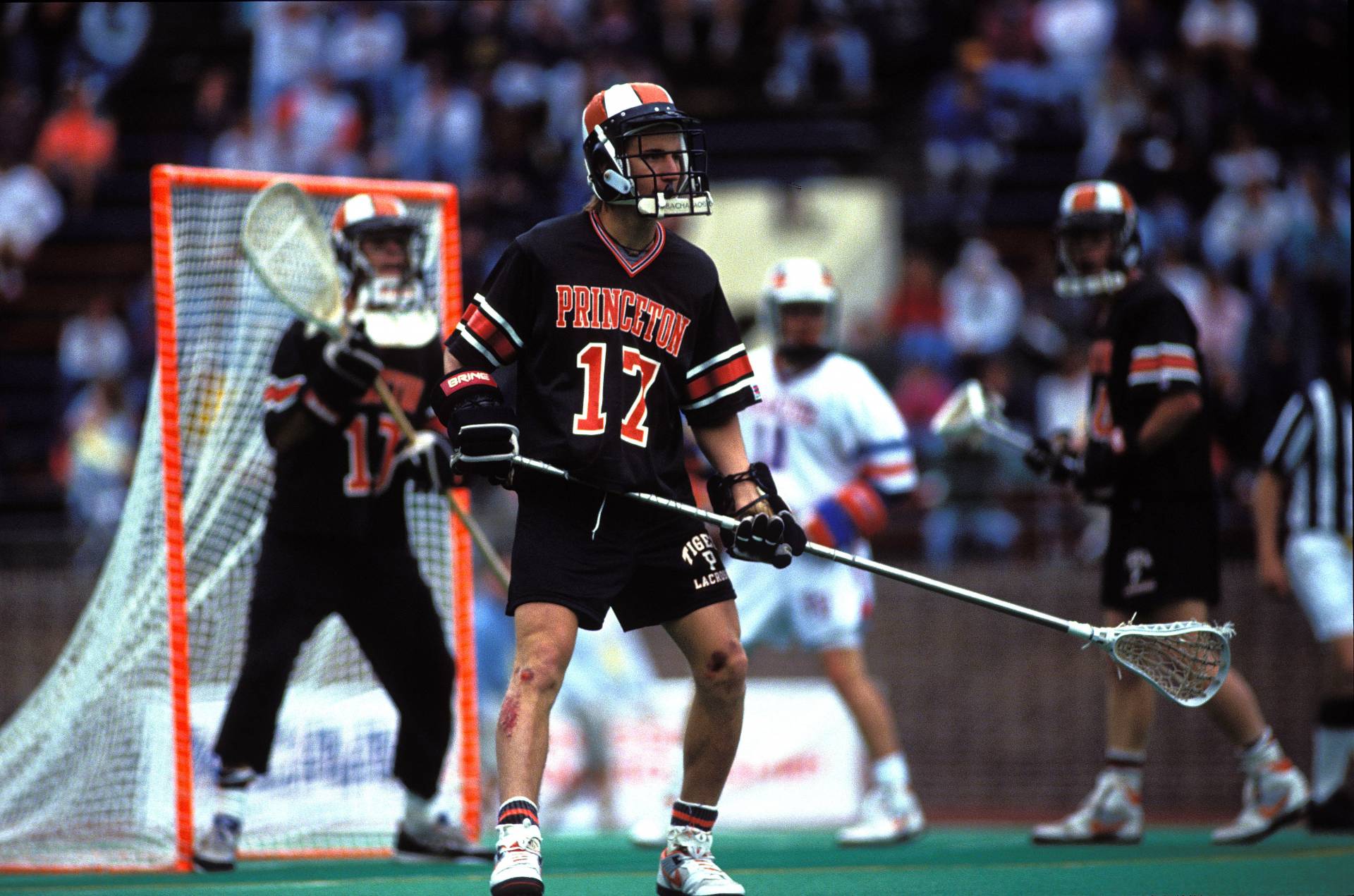 David Morrow's place in the history of the sport of lacrosse and Princeton Athletics was cemented years ago with his performance on the field as one of the greatest defensemen ever and off the field in his work to grow the sport in ways previously unimaginable. Now that legacy has been punctuated with an honor unprecedented for a Princeton Tiger.

Morrow, the 1993 National Player of the Year and today the CEO of Warrior Sports, has been named one of six recipients of the NCAA Silver Anniversary Award, which annually recognizes distinguished individuals on the 25th anniversary of the conclusion of their college athletics careers. Representatives of NCAA member schools and conferences, along with a panel of former student-athletes, select each year’s recipients.

“I’m very humbled to receive such a great honor from the NCAA,” Morrow said. “I’m very fortunate to have been raised in a family where I have always been supported and encouraged to do my best. Thank you to my wife Christine, my parents Kevin and Renee, Jim and Anne Davis, Bill Tierney, Princeton University, all my lacrosse teammates and all the excellent people I have worked with at Warrior and New Balance for the past 25 years.”

Morrow is the first Princeton alum to win this award, one of the major awards the NCAA gives annually.

“On behalf of the Princeton Department of Athletics, I’d like to congratulate David Morrow on winning the NCAA’s Silver Anniversary Award,” Ford Family Director of Athletics Mollie Marcoux Samaan said. “I had the opportunity to be a Princeton athlete at the same time that he was, and I know what a great lacrosse player he was here. I also know the enormous impact he has had on the sport of lacrosse since then, as well as how loyal he has remained to Princeton and the lacrosse program. It is our goal to provide our student-athletes with the skills and values necessary to achieve, serve and lead while they are students and after they graduate. David has done all three throughout his life, and we are extremely proud to have him representing the University as a recipient of this prestigious award.”

In addition to Morrow, the 2018 recipients are Jason Elam (football, Hawaii), Julie Foudy (soccer, Stanford), Jim Hansen (football, Colorado), Nnenna Lynch (cross country and track and field, Villanova), and Lance Pilch (baseball, Air Force). The NCAA will recognize the honorees at the Honors Celebration during the 2018 NCAA Convention on Jan. 17 in Indianapolis.

“I know the entire Princeton lacrosse family is thrilled about David Morrow’s recognition from the NCAA,” said Princeton head coach Matt Madalon. “He was one of the keystones of the lacrosse dynasty that was built here, and he is one of the greatest players ever to play the sport, especially on the defensive end of the field. What he has done to help grow the game since then, from the grass roots through the professional levels, is unmatched. For all of his successes, he has never forgotten about Princeton and the lacrosse program here, and his generosity has helped so many lacrosse players have a great experience in their time as Princeton Tigers.”

David Morrow came to Princeton in 1989 from Brother Rice High School outside Detroit, where he was a standout in lacrosse and hockey. At Princeton, he played sparingly as a freshman, when he considered switching back to hockey.

Instead, then head coach Bill Tierney convinced him to stay with lacrosse and taught him to use his speed and intensity, allowing Morrow to become one of the greatest defensive lacrosse players the sport has seen. Morrow would be a three-time first-team All-Ivy League selection, a two-time first-team All-America, a two-time national defenseman of the year and the national player of the year as a senior. He is one of two defenseman ever to be the national player of the year, and he remains the most recent to have won the award.

Morrow also helped Princeton win the Ivy League championship as a junior and senior and, as a junior, was one of the keys to the first of Princeton’s six NCAA championships. In fact, Morrow, playing defense, scored two goals in Princeton’s 16-14 win over North Carolina in the 1992 semifinals, before Princeton defeated Syracuse 10-9 in two overtimes in the final. Morrow led Princeton back to the Final Four as a senior.

“David is driven,” said Tierney. “He’s opinionated. He’s talented. He’s super intelligent. He thinks of the future. He’s never taken no for an answer. He was the same as a kid, the same as a player. Now he’s the same as a business executive. He’s edgy. He won’t stop working. He won’t stop looking to make something better, including himself. He’s not afraid of anything or anybody. That’s the magic of him.”

While still a Princeton undergrad, Morrow took a project his father was working on to invent a new kind of snowshoe and applied the technology to his sport. The result was the invention of the titanium lacrosse shaft, which Morrow patented and began to produce, using for the name of his company his high school’s nickname of Warriors.

“Before that, all sticks were made of aluminum,” Tierney said. “Players would break two or three dozen each year. David came along with a titanium shaft with a year guarantee, and they couldn’t produce them fast enough. Every thing that Warrior has done since has been on the front end of innovation, continuing through today. He was an innovator on the field as a player, and he’s been an innovator in his entire professional career.”

Morrow, who also won gold medals in the 1994 and 1998 World Championships with the U.S. National team, built Warrior Sports from something that started in his Princeton dorm into an international power in sports, especially lacrosse.

Warrior is a leader in the manufacturing of lacrosse equipment, and its cutting edge approach to marketing the sport has helped fuel the huge growth that lacrosse has enjoyed in the last two decades.

His company is now a global sports brand that specializes in hockey as well as lacrosse equipment, employing more than 500 people and supplying collegiate teams across the country. Morrow is listed as an inventor for more than 60 U.S. and international patents.

He also co-founded Major League Lacrosse, the professional outdoor league, which wrapped up its 17th season this past August.

In the community, Morrow focuses on supporting organizations helping economically challenged and disabled children to play lacrosse and hockey, and in the past 25 years, he and Warrior Sports have supported more than 70 different charitable organizations with financial and equipment donations.

“As a teammate, David was a ferocious competitor,” said Ed Calkins, the president of the Friends of Princeton Lacrosse. “We felt it at the time, and we still feel that we were honored to play with him. Since then, he has transformed the sport and the lacrosse equipment industry. He’s just remarkable. I’d argue that in the last 25 years, his contributions to the sport of lacrosse have been unrivaled. When we at Princeton talk about giving back to the program and the sport, David has done that multiples upon multiples upon multiples of times in so many different ways. He’s been incredibly generous and loyal to the program. He’s just a tremendous person, though on the field not someone you wanted to against, even in practice.”