At a media conference following her appointment as Princeton University's Ford Family Director of Athletics, legendary Princeton student-athlete Mollie Marcoux said she is thrilled to return to the University that played a transformative role in her life as a scholar, athlete and leader.

"Princeton athletics taught me so many life lessons that I use every day," Marcoux said Tuesday afternoon to a crowd of coaches, staff, students and media gathered on Carril Court in Jadwin Gymnasium. "To [be able to] do everything I can to be sure that future generations of Princeton students continue to have the educational and character-building experience that I had while being a student here is very exciting."

Marcoux, a varsity athlete in soccer and ice hockey, was named to the athletic director position effective Aug. 4. She will succeed Gary Walters, who announced last fall that he would step down after leading the athletics program at Princeton for 20 years.

"I am absolutely thrilled that Mollie has accepted our offer to return to Princeton," Princeton University President Christopher L. Eisgruber said at the event, as orange and black banners marking years of Princeton achievements in men's and women's athletics hung overhead.

Eisgruber continued: "Mollie Marcoux understands the values of this University's athletic program because she has lived them. As an undergraduate, Mollie embodied the very best of what it means to be a student-athlete at Princeton — winning acclaim for her performances on the ice as a star hockey player, on the field as a standout soccer player, and in the classroom as an exceptional and determined student. She truly represents the 'Education Through Athletics' philosophy that guides this University's approach to collegiate athletics." 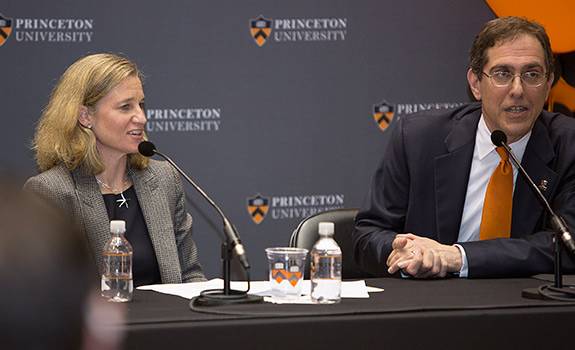 Mollie Marcoux has been appointed Princeton University's Ford Family Director of Athletics, effective Aug. 4. Marcoux, who graduated from Princeton in 1991, was a legendary student-athlete who played varsity ice hockey and soccer. Her appointment was announced by Princeton University President Christopher L. Eisgruber April 15 at an event at Jadwin Gymnasium on the Princeton campus. (Photo by Amaris Hardy, Office of Communications)

Marcoux graduated with honors from Princeton in 1991. She earned four letters each in soccer and ice hockey, as well as numerous University and Ivy League athletic and academic awards.

She spent much of her career at Chelsea Piers Management, and is currently the executive vice president and executive director of the world-class amateur sports complex Chelsea Piers Connecticut. She previously coached and served in athletics and admission roles at the Lawrenceville School. 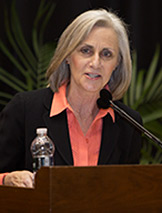 Vice President for Campus Life Cynthia Cherrey, to whom Marcoux will report, brings the news conference in Jadwin Gymnasium to order.

"I've been so fortunate to be able to do what I love. In particular, my experience throughout the past 19 years helping to build Chelsea Piers New York and Chelsea Piers Connecticut," Marcoux said. "I have had the opportunity to develop and market unique sports programs for athletes of all ages and abilities, to design and maintain world-class sports facilities, to help an organization full of talented people grow and help mentor them."

Eisgruber called Marcoux "an ideal leader for our athletics program." He noted her background as a skilled leader of athletes, coaches, sports programs and venues; her familiarity with the full range of athletic activities at Princeton, including varsity, club sports and recreational programs; and her experience as an accomplished athlete who would uphold Princeton's tradition of intercollegiate excellence on the playing field.

"She understands — because she has lived it — the commitment that Princeton makes to ensuring that the term 'scholar-athlete' bears equal weight on both sides of the hyphen," Eisgruber said. "Mollie believes fervently that the lessons learned through athletics — about competition, teamwork and integrity — translate into skills and traits that benefit our graduates long after they complete their varsity careers. All of us here at Princeton agree."

Eisgruber said Marcoux will build on Princeton's traditions and also help write the next chapter in the rich history of Princeton athletics, noting her role as the first female athletic director. 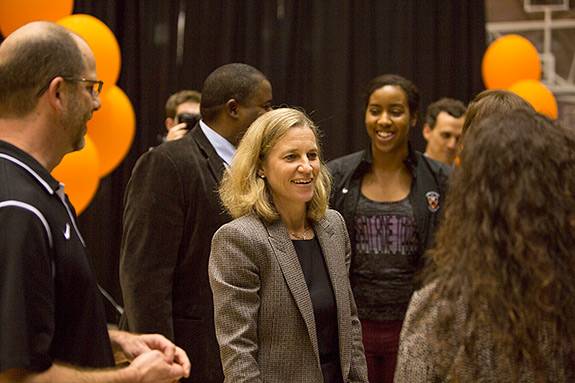 Marcoux speaks with Athletics staff and coaches following the announcement of her appointment as Princeton's next athletic director. (Photo by Amaris Hardy, Office of Communications)

Marcoux expressed excitement for the opportunities ahead, and said she is especially looking forward to building partnerships with coaches.

"I'm not alone in the belief that Princeton has the best coaches in the Ivy League, and I would argue, in college sports," she said. "Princeton coaches across the board are exceptional. Not only for their personal accomplishments, but also their integrity and overall commitment to our student athletes as competitors, as leaders and as scholars."

She said she is eager to work with students to continue Princeton's competitive spirit and commitment to excellence.

"We have amazingly talented athletes on campus, but every day we need to work to challenge ourselves and get better," Marcoux said. "Our teams create a feeling of school spirit, pride and enthusiasm and I am so happy to dedicate myself to helping our teams and our athletes to continue to serve as role models and excellent representatives of this great university both on and off the playing field."

Marcoux said she hopes to continue to deepen the University's commitment to recreational sports, noting the high number of students who play non-varsity sports and use recreational facilities on campus.

"I have a great deal of experience working in amateur sports and developing programs, and I can't wait to draw on that experience at Princeton," she said.

Looking at her predecessor, Walters, seated in the front row, Marcoux acknowledged she had "huge, huge, huge shoes" to fill and said she hopes to build on Walters' enormous success during the past 20 years.

"[I hope] to make all the members of the Princeton family proud of an athletic program that I truly believe is the best in the world," she said.

She added she's also excited to move to Princeton with her husband and three young children to become part of the greater University community.

Eisgruber introduces Marcoux as Princeton's next director of athletics at the media conference in Jadwin Gymnasium on April 15. (Video by Danielle Alio, Office of Communications)

Marcoux speaks at the media conference about how honored she is to serve Princeton in her new role as athletics director. (Video by Danielle Alio, Office of Communications)

Marcoux was recommended by a University search committee led by Vice President for Campus Life Cynthia Cherrey, to whom Marcoux will report. The committee included faculty, coaches, students, administrators and alumni.

Men's basketball head coach Mitch Henderson, a member of the search committee, said Marcoux will be a great colleague and leader.

"She's a competitor. She's a former student-athlete. She has a fire within to be good. She's a coach's athletic director — she sees the landscape through the lens of a coach," Henderson said. "Overall, she's someone we all enjoyed spending time with. Athletics is a close-knit group and it was clear through the search process that Mollie is going to fit right in."

Dean of Admission Janet Rapelye, also a member of the search committee, said the committee was impressed with Marcoux's professional experience and her accomplishments at Princeton as a student and athlete.

"She represents just the right balance of academics and athletics," Rapelye said. "We have always had a good relationship with Athletics and I can only see this continuing on and Mollie not only sustaining, but enhancing it."

Marcoux's media conference was streamed live and will also be archived online for later viewing on the University's WebMedia site.