Two teams of Princeton University students have received $10,000 grants from the Projects for Peace program, which supports new and creative ideas for promoting peace around the world. This summer, seniors Darya Koltunyuk and Stephanie Liu plan to introduce chamber music to young people in New York City; and Haraya Buensuceso, a sophomore, and Jacob Scheer, a senior, aim to bring together budding entrepreneurs to address the issue of climate change in the Philippines.

Philanthropist Kathryn W. Davis established Projects for Peace in 2007 on the occasion of her 100th birthday. Davis, who died in 2013 at the age of 106, was intent on advancing the cause of peace and sought to motivate tomorrow's leaders by challenging them to find ways to "prepare for peace." The Davis family has honored her legacy by continuing to fund Projects for Peace. For 2015, the program funded 127 proposals.

"Competition is keen, and we congratulate those students whose projects have been selected for funding in 2015," said Philip Geier, executive director of the Davis United World College Scholars Program, which administers Projects for Peace. "We are pleased to once again help young people launch some initiatives that will bring new energy and ideas to improving the prospects for peace in the world."

Koltunyuk, a pianist and comparative literature major, and Liu, a violinist and economics major, plan to create a summer chamber music program for youth in and around New York City. Aimed at building community among young people segregated by socioeconomic class, the two-week program will accept about 50 school-age students, who will work with music coaches, take workshops and classes, attend concerts, and then play in concerts themselves.  The pair met through music at Princeton and believe chamber music — in which small groups of musicians play a variety of instruments together — is well suited to building community among young people.

"We believe that music could be a perfect tool for achieving this goal," Koltunyuk and Liu wrote in their project proposal. "It is in our experience with music that we have come closest to peace. ... As musicians, we have traveled and performed in places very different from our hometowns, and on a personal level, have experienced powerfully how music can be a language connecting people of all different backgrounds. We feel that chamber music — a very special type of experience in music-making — is particularly emblematic of the potential to bring people together." 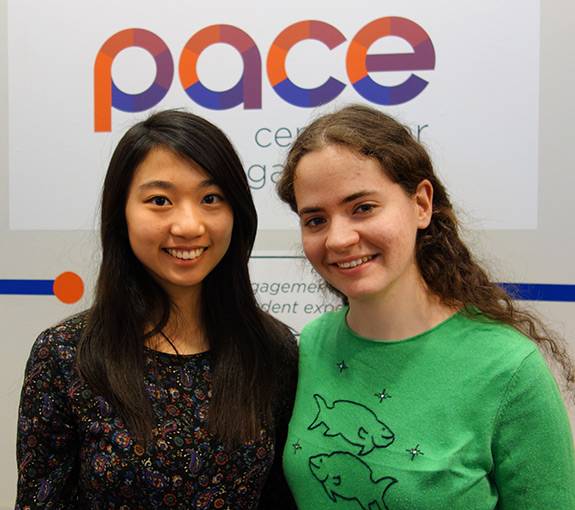 Princeton seniors Stephanie Liu, left, and Darya Koltunyuk, right, will use their Projects for Peace grant to create a summer chamber music program for youth in and around New York City. (Photo by Gwen McNamara, Pace Center for Civic Engagement)

Koltunyuk and Liu will work with the Opportunity Music Project in New York City, an organization where Koltunyuk volunteered previously that offers free music lessons to children who cannot afford them. The students will focus on  creating and promoting the summer program.

"Many Projects for Peace focus on international issues," Liu said. "We wanted to examine inner-city issues and stay somewhat closer to home. We're really excited to be putting everything together for what we'll be doing with all the kids and developing a plan that makes this effort sustainable year after year."

Buensuceso, an economics major, and Scheer, a mechanical and aerospace engineering major, intend to bring together young entrepreneurs from across the Philippines to develop solutions to a broad spectrum of social and environmental problems. The students each have independently founded organizations designed to spur creative problem-solving in the Philippines; their Project for Peace connects their work.

Buensuceso co-founded the Watson Institute, an accelerator program for student innovators, leaders and entrepreneurs, after realizing that scant opportunities existed for youth from the lower strata of society to help create solutions to problems that directly affect them. At the same time, Scheer, as part of a Project for Peace in 2014 in the Philippines, co-founded Hack the Climate, which used a hackathon — an event in which software developers collaborate to build innovative web and mobile software — to encourage technology-based solutions to issues such as climate change, deforestation and mining.

"The problems of development, unemployment, environmental degradation and lack of education are intimately connected, and we believe that they cannot be fully addressed in isolation," Scheer and Buensuceco wrote in their project proposal. "Our three-day event will take a holistic approach to combating these issues by combining Hack the Climate's innovative eco-hackathon model with the Watson Institute's cutting-edge leadership development training." 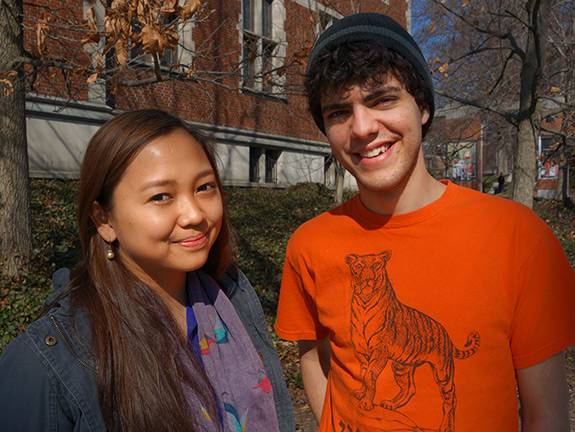 Sophomore Haraya Buensuceso, left, and senior Jacob Scheer, right, will use their grant to bring together budding entrepreneurs to address the issue of climate change in the Philippines. (Photo by Gwen McNamara, Pace Center for Civic Engagement)

The three-day hackathon — called WatsonxHacktheClimate — will take place Aug. 7 through 9 during the final week of Watson Institute's eight-week summer symposium in Manila. "We're really looking forward to creating synergy," said Scheer. "To create a network of people that connects nongovernment organizations to youth as well as tech people, to bring everyone to the table."

Applications from Princeton students were sent through the University's Pace Center for Civic Engagement, which helps make meaningful service a part of the Princeton student experience. A complete list of the winning schools and projects is available on the Projects for Peace website.