Princeton senior strives to break the cycle of poverty in India 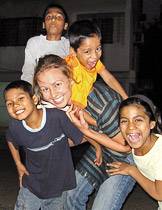 Julia Neubauer enjoys giving piggyback rides to the kids at the Ashraya Initiative for Children, an orphanage in Pune, India. Neubauer, who graduated with a degree in economics earlier this month, set up the facility with five other young women when she was a Princeton freshman and hopes to expand its outreach efforts to help even more of the impoverished of Pune. (Photo: Elizabeth Sholtys)

Below left: Eventually, Neubauer hopes to return to India for an extended period of time. "I'd really like to watch these kids grow up," she said. "So many of them are so smart, and I'd love to see some of them go on to college. I really want to see how they’re doing in 20 years." (Photo courtesy of Julia Neubauer)

In the spring of her freshman year at Princeton, Julia Neubauer and two of her high school classmates established an orphanage in Pune, India.

Now a senior, she has helped run the Ashraya Initiative for Children while pursuing a degree in economics. Over the course of weekly videoconferences and extended visits to manage the facility, Neubauer has expanded her goal from providing a home for a group of children into a lifelong commitment to improve the lives of people in this part of the world.

Neubauer grew up in Austria, but decided she wanted to spend her last two years of high school in another country. She enrolled in the Mahindra United World College (UWC) in Pune.

After a sheltered childhood in a small town, the crowded slums of an Indian city came as a shock to the 16-year-old Neubauer. Newly arrived in 2001 at the residential school in Pune, she still recalls her first impressions of the poverty around her — and the love she immediately felt for the street children who endured it. 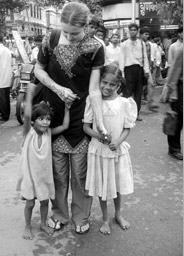 "One day I saw shoeless little girls walk right past a dead body completely covered with flies," Neubauer said. "I mean, these people were literally dirt poor, living in railway stations if they lived anywhere. Seeing all this at a young age, I got incredibly sad and wanted to do something about it."

Her experience spurred her to action. When contacted at Princeton in 2004 by her former classmate, Elizabeth Sholtys, about forming a new home for street children, she jumped at the opportunity. In the summer after her freshman year, she joined Sholtys in India to develop plans for the home. Eventually, another UWC alumna and three other like-minded young women joined them.

During the next school year, the six worked on the legal, financial and administrative facets of the organization as well as locating and setting up a suitable home. They named the facility "ashraya" — which means "hope" as well as "shelter" in Hindi — and finally opened it in June 2005. The orphanage has become a full-time home for nine street children between the ages of 5 and 14 and two live-in caretakers, and provides assistance to 20 more children.

The Ashraya Initiative has garnered 17 awards to date, including a recent "100 Projects for Peace" grant from philanthropist Kathryn Wasserman Davis, mother of Princeton Trustee Shelby M.C. Davis, a member of the class of 1958.

Neubauer has spent much of her time outside of class helping to manage the Ashraya Initiative and working to expand its outreach efforts into the community. The six young women will use the $10,000 Projects for Peace grant to build a computer training center nearby, and are trying to raise money for a health center as well.

But for Neubauer, the primary goal has always been to create a genuine home for those who had none.

"My first year in Pune, I volunteered at a one-room orphanage that had only six caretakers for 200 little kids," she said. "When I visited, these kids were starved for human contact, just begging to be touched. We were determined to provide more of a family environment in our home."

Determination has proven to be a necessity in many ways. Neubauer and her colleagues, who have been attending universities in the United States, Canada and the United Kingdom, have had to mesh their schedules to ensure that at least one of them is on site at all times. They have coordinated management efforts through vehicles such as the videoconferences. Navigating the legal systems of several countries to establish themselves as a nongovernmental organization has been a long struggle, as has been the process of sponsoring the children.

Neubauer, whose self-description on her Facebook profile reads "I live for kids," takes it all in stride.

"I had a great time walking around when I was 19 telling people I had nine kids," she said, smiling. "I go there at least once a year and can't wait to go back to see the children again."

Eldar Shafir, a professor of psychology and public affairs, said that Neubauer has transcended the idea that a challenge on the level of founding an overseas orphanage might be too much for a college student.

"Julia's got a worldliness and courage about her that allows her to deal with an incredible number of issues in India," said Shafir, who taught Neubauer during her sophomore year. "She does so on a level that people twice her age might find daunting."

Neubauer has earned recognition for her work, including receiving Princeton's 2006 International Service Award and being named "Woman of the Year" by Wienerin, an Austrian women's magazine. The publication also took up the Ashraya Initiative as a cause, helping the group raise funds.

"All six of us on the board are heavily involved with fundraising," Neubauer said. "We'd like to care for more children and help the community in more ways, but it's also important to find ways to make the facility sustainable. If more of the kids in the community stay in school, it will help break the cycle of poverty, which puts so many of these kids out on the streets as beggars when they are barely old enough to walk and talk."

Following graduation, Neubauer will spend a few years working for the Princeton University Investment Co., where she hopes to learn more about financial management. As much as she can, she intends to use her proximity to local schools to visit her kids' American counterparts and tell them about the Ashraya Initiative.

Eventually, Neubauer said, she hopes to return to India for an extended period of time.

"I'd really like to watch these kids grow up," she said. "So many of them are so smart, and I'd love to see some of them go on to college. I really want to see how they're doing in 20 years."

Shafir said that the time Neubauer has spent there already has given her an unparalleled depth of experience.

"The expertise Julia has gained from running the Ashraya Initiative is enormous, and will complement her Princeton education," Shafir said. "She shows what you can do with guts and imagination."