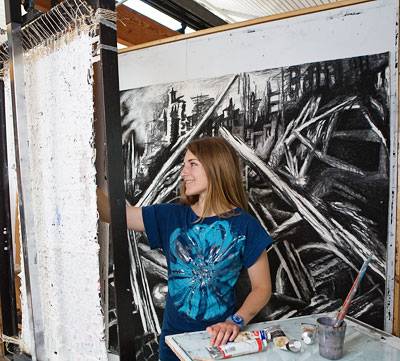 Princeton senior Julie Dickerson will use the 2010 Martin Dale Fellowship to create murals at hospital and shelters, and to start an art program for patients or residents in one of the institutions. (Photo: Brian Wilson)

When Julie Dickerson's 93-year-old grandfather had to leave his ailing wife in a hospital room several months ago, he seemed to handle the difficult decision well, except for one problem: the bleakness of his wife's new surroundings.

"He just kept repeating over and over that the thing that troubled him most was the blank walls in the room," said Dickerson, a Princeton senior. "It just upset me so much, because I can fix that so easily."

Inspired by a desire to help others in similar situations, Dickerson will spend the next year using her artistic skills to brighten the surroundings at several hospitals and shelters in New Jersey and New York as the 2010 winner of the Martin Dale Fellowship.

The Dale Fellowship is a $30,000 prize awarded annually to a graduating senior to allow him or her "to devote the year following graduation to an independent project of extraordinary merit that will widen the recipient's experience of the world and significantly enhance his or her personal growth and intellectual development."

Dickerson will use the prize to find hospitals or shelters that will allow her to create murals, whether on a single wall or an entire floor, or throughout a facility. She also plans to start an art program for the patients or residents in one of the facilities. In her application, Dickerson wrote that the Dale Fellowship "would empower me to empower others."

Dickerson, who is from Little Silver, N.J., is majoring in the Department of Art and Archaeology, where she is enrolled in a track that combines art history with studio art in collaboration with faculty in the Program in Visual Arts in the Lewis Center for the Arts.

Rachael DeLue, an assistant professor of art and archaeology, and one of Dickerson's senior thesis advisers, said of her Dale proposal: "In imagining her postgraduate project, she demonstrated her keen sense of how art might be made relevant beyond the studio."

Dickerson proposed to work with six institutions but does not want to "limit the scope" of her project. She is open to small- and large-scale projects, depending on a particular facility's needs.

Dickerson's first project will be at a women's shelter in New York City, which was one of the first places she reached out to before applying for the fellowship: "I said, 'I'm going to do this for them, whether I get the fellowship or not. I want to do it.'"

Eve Aschheim, a senior lecturer in visual arts who also advised Dickerson's senior thesis, said, "It has been inspiring to work with Julie. Her project to paint murals in shelters and hospitals is generous, a real gift to those within the blank walls of those institutions."

When Dickerson met with the managers of the women's shelter, she said they told her that one of the hardest problems their residents have is "imagining a better life for themselves."

In response, Dickerson is considering starting an art program there to give women a place to work -- literally on a blank canvas -- and jump-start their imaginations. She eventually would like to present a showing of art produced by people in trying circumstances.

But first she'll begin with a mural in the children's room at the shelter. Dickerson went to the space with a design in mind, but soon decided to ask what the kids wanted.

The children wanted something "totally different" from what she proposed, Dickerson said. "They wanted fish, birds, clouds and rainbows, and I said 'OK! Let's do it!'"

Her enthusiasm for the project extends beyond the physical product. She believes that in addition to giving to others, she'll have a great opportunity for personal growth.

"I've had a really good life," Dickerson said. "I've grown up in a great home, I've gone to a great school. I'm going to be entering realms of life that I have never really been in contact with. And I think that's so important. I need to know what their experiences are like. I can give them this opportunity to express themselves, but what they're going to be giving back to me is infinitely more."

DeLue said, "Julie's qualities of rigor and courage, and her willingness to question constantly her own work and the motivations behind it, have shaped her wish to make this work relevant to people other than herself, to put her creativity in the service of a larger social good."

Dickerson, who also is pursuing a certificate in Italian, is a residential college adviser in Forbes College. She also has volunteered with the nonprofit organization World Vision, helping to organize an event called "Night of Nets" on campus last spring to raise awareness and funds for people suffering from malaria in Zambia. In addition, Dickerson has taught art privately to students of all ages for four years.

"I've never seen a student so extreme and contradictory in her passions," Aschheim said. "Her interest in the iconography of war and apocalyptic destruction, the subject of an outstanding thesis drawing show, is counteracted by her optimism and deeply humanitarian impulses. Her idealism is refreshing."

DeLue added, "Simply put, Julie is clearly someone ready and able to give a tremendous amount to the institutions and people with whom she hopes to work."

While her plans after her Dale year are uncertain, Dickerson said she knows that art and service are in her future: "I will be doing service of some sort my entire life, whether it's through an institution or on my own."