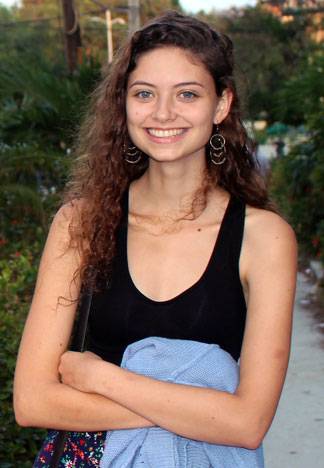 Photo by Miranda Alperstein, Class of 2017

Twelve sophomores are winners of this year's Dale Summer Awards, which provide a $5,000 stipend to pursue a summer project that provides important opportunities for "personal growth, fosters independence, creativity and leadership skills, and broadens or deepens an area of special interest." The Dale Summer Award winners are nominated by their residential college. The recipients and the titles of their projects are:

• Patricia Kennedy Hayes Aguiar, "Life in the Face of Adversity: A Musical Pilgrimage to the Birthplace of the Blues" — Rockefeller College

• Jordan David Salama, "The Legend of the Lost Salamas: Rediscovering the Incredible Adventures of a Family on the Move" — Whitman College

• Delaney Dawson Thull, "Moments of Truth during Days of Reckoning: An Exploration of Individual Integrity and Resilience" — Mathey College

• Annabelle Yu An Tseng, "What H Stands 4: More than a Visa" — Mathey College

Margaret Wright, a senior majoring in English who is affiliated with Rockefeller College, has taken many classes at Princeton that have taught her how to better articulate and present her opinions. To add to those skills, she said, she would like to focus instead on listening to other people — "not in order to rebut an argument or support a claim, but just to try to understand."

Thanks to the Martin A. Dale '53 Fellowship, Wright will have the opportunity to do just that. This summer, she will travel across the country, primarily on foot, to conduct interviews and use them to create "listening poems," or poems composed entirely of words and phrases spoken by the people she meets.

"I am increasingly afraid that we as a country are fundamentally unwilling or unable to listen to each other," said Wright, who is also earning certificates in creative writing and Latin American studies. "My hope is to create a collection of poetry that invites and encourages the inhabitants of this country — myself included — to listen to one another and to hear from each other as opposed to about each other. My hope with this project is to experiment with the ways in which poetry can cultivate empathy and create opportunities for listening."

The fellowship, created by 1953 Princeton alumnus Martin Dale, provides a $35,000 grant for a senior to spend the year after graduation on "an independent project of extraordinary merit that will widen the recipient's experience of the world and significantly enhance the recipient's growth and intellectual development."

Wright said her experience at Princeton has helped her develop two interests combined in her Dale project: creative writing and social justice.

She didn't know much about poetry before coming to Princeton. "It was the classes here that made me really fall in love with poetry, and eventually become curious about the ways in which poetry could be a means of making change in the world," she said.

"Margaret's poems are evidence of her deep and ongoing engagement with the world and people around her," said Tracy K. Smith, the Roger S. Berlind '52 Professor in the Humanities and the director of the creative writing program in the Lewis Center for the Arts. "She sees and explores what is quiet, inchoate, elusive and invisible, and she finds ways of drawing these glimpsed gestures, feelings and utterances into lyric language," said Smith, who is one of Wright's senior thesis advisers.

She also learned about voice in poetry when she spent a semester in Cuba during her junior year. There, she was introduced to Cuban poet Soleida Ríos by her adviser, Adrian Lopez-Denis, lecturer in history and the Program in Latin American Studies who directs the Princeton in Cuba program. She translated Ríos' poems for her junior paper, but it was a project with which she struggled. "I finally had to accept that there was no way for me to create poems that were entirely faithful to either of our poetic styles," she said.

"And that realization actually made me think about poetry in a different, more liberating way than I ever had before. What I gained from [this translating project] was an intense curiosity about what can happen when voices — particularly very different voices — are forced to cohabit in poetry."

Wright is a member of Ellipses Slam Poetry team and Students for Prison Education and Reform (SPEAR), a student organization that works to advocate for prison reform on issues such as mass incarceration, educational opportunities for prisoners, solitary confinement, the death penalty, and related issues. Her involvement in both activities have shaped her as an artist and an activist.

"My involvement in SPEAR has taught me how difficult, and also how vitally important, listening is in any type of advocacy or social justice work," she said. She added that co-teaching poetry, with other members of Ellipses, inside a correctional facility in partnership with the Prison Electives Project, which develops and delivers original, semester-long courses at New Jersey state prisons, influenced the conception of her project. "Discussing the poems with our students, and hearing their poetry, has confirmed for me the incredible potential of poetry to facilitate communication and connection, even between people who've had pretty different life experiences," she said.

Wright's Dale project was also shaped by a six-week journalism project, funded by the Humanities Council, during the summer after her sophomore year. She wrote profiles of formerly-incarcerated artists advocating for criminal justice reform. "Speaking with the artists was incredible, but when I started actually writing the profiles, I became increasingly uncomfortable with the prominence of my own voice in the pieces I was writing," she said. "With this project, I want the end product to be as much as possible something co-created by me and the people I meet, and to be made of their voices more than my own." She is especially committed to including as diverse a cross-section of voices as possible and, in particular, voices from marginalized communities often excluded from mainstream media.

Whether she decides to pursue a career in issues related to criminal justice reform or as a writer — or ideally, both — Wright thinks spending time focused on listening to voices from across the country would change the way she does this work for the better. "Part of my goal in creating a book of poems composed entirely of the voices of other people is to challenge myself to improve as a listener, and to deepen my own understanding of what it means to listen to another person," she said.

Aryeh Nussbaum Cohen, a 2015 Princeton alumnus and former member of Rockefeller College, who received the Dale Summer Award in 2013, recently competed in the Metropolitan Opera's National Council Auditions Grand Finals concert, where participants, accompanied by the Metropolitan Opera Orchestra, compete for cash prizes and the chance to launch an operatic career.

His Dale project, "An Opportunity for Operatic Growth," was his first encounter with the Metropolitan Opera.

Said The New York Times of his performance: "[Nussbaum Cohen] already possesses a remarkable gift for intimate communication in a vast hall, combined with a voice of velvety gentleness — surprisingly penetrating given the tenderness of its texture — and a taste for adventure… [Nussbaum Cohen] is ready."

A 2016 participant in San Francisco Opera's Merola Opera Program, Nussbaum Cohen recently won first prize in the Houston Grand Opera Eleanor McCollum Competition and was a finalist in the George London Foundation Competition. He made his European professional operatic debut at Vienna's Theater an der Wien.

In 2015, he received an A.B in history with a certificate in musical performance. This summer, Nussbaum Cohen will join the Houston Grand Opera Studio as the first countertenor in the program's history.