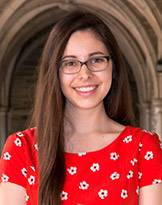 Princeton University senior Katherine Clifton was first inspired to write a play about hostility between the Serbs and Romani people while participating in Princeton's Bridge Year Program. Five years later, she will do just that as the 2015 winner of the Martin Dale Fellowship.

Clifton, an English major earning a certificate in theater, plans to spend a year in Serbia staging an original play that explores the perspectives of both groups and creates dialogue between them. As part of the Bridge Year Program, Clifton lived in Serbia for nine months doing community service work before her freshman year.

"With the Dale Fellowship, I will close my Princeton chapter by returning to where it began," Clifton said. "I hope to instigate dialogue between the Serbs and Romani people (known as the Roma) using theater as a tool to embrace our shared humanity and to challenge our prejudices. The Dale will allow me to delve more deeply into the perennial question of what unites and what divides us."

While living in Serbia in 2010-11, Clifton taught English to children in a Roma settlement in the city of Niš. She said she witnessed the marginalization of Romani people, who are a large ethnic minority in Europe, and observed prejudices the Roma and Serbs have about each other.

"I have not had the chance to revisit Serbia since that meaningful year, and for the Dale, I propose to return to facilitate conversation between the Roma and the Serbs by creating a piece of documentary theater based on interviews I conduct with them," Clifton said. "I plan to reconnect with Serbian activists, politicians, journalists, academics, students and others to hear their experiences with and feelings toward the Roma, and I would do the same with Roma youth and adults."

Clifton plans to use the interviews as the base for a play that would feature monologues by Serbian and Roma characters. Her goal is to perform the play with Roma and Serbian actors in playhouses throughout the country, and also translate the text to English.

She said she hopes Serbs and Romani viewers will leave the play with a more open mind and respect for each group's commonalities and individual differences.

"Though this play would not be a panacea that nullifies existing prejudices, it would give viewers the opportunity to empathize with characters who personify various viewpoints," Clifton said.

Clifton's Dale project builds on her academic and extracurricular interests in theater. Clifton has performed with and directed for the Princeton Shakespeare Company, and has performed on stage and worked behind the scenes for student plays presented by the Lewis Center for the Arts. Her senior thesis is titled "Shakespeare, 'Thou Art Translated,'" and explores Shakespeare's influence on Japanese stage and film.

"Katherine has spent a substantial part of her time at Princeton at the Lewis Center. The relationship between a play and a specific polis is more often than not at the center of her research," said her thesis adviser, Michael Cadden, chair of the Lewis Center for the Arts. "As you can imagine, I'm delighted she’ll be working next year to apply what she's learned at Princeton about the relationship between theater-making and community building."

Cadden added: "In everything she has done for me, Katherine has demonstrated an excellent intelligence, a lively wit and a colorful imagination. She writes and speaks with the authority that comes from having put the hours in to learn a subject, but she wears her learning lightly. Indeed, I have rarely encountered a student so taken with the 'fun' of learning!"

She also is a PORDIR fellow (Program on Religion, Diplomacy and International relations) with the University's Liechtenstein Institute on Self-Determination and a member of the Human Values Forum and Students for Prison Education and Reform. She spent last summer in Japan as the Osawa Fellow through the Princeton in Asia program, which included one week teaching drama at a Japanese summer camp. In 2012, she represented the United States in the English Speaking Union's International Speaking Competition.