During August, seven Princeton students and alumni experienced what it's like to be a part of one of the largest international theater festivals in the world — by serving as interns for the musical improvisation troupe Baby Wants Candy (BWC) at the Fringe Festival in Edinburgh.

The ensemble has a Princeton connection. In 2014, BWC's director Al Samuels and company members taught a Princeton Atelier on musical theater improvisation at the Lewis Center for the Arts. The Princeton Atelier, founded in 1994 by Nobel laureate Toni Morrison, the Robert F. Goheen Professor in the Humanities Emeritus, brings professional artists to the University for intensive collaborative work with students. Since BWC's Princeton course, the Lewis Center has promoted the company's Fringe Festival internship to its students. This summer, the Princetonians were among 30 interns from the United Kingdom and the United States. Below, four of them share highlights, surprises and lessons learned backstage, onstage and throughout the streets of Edinburgh. 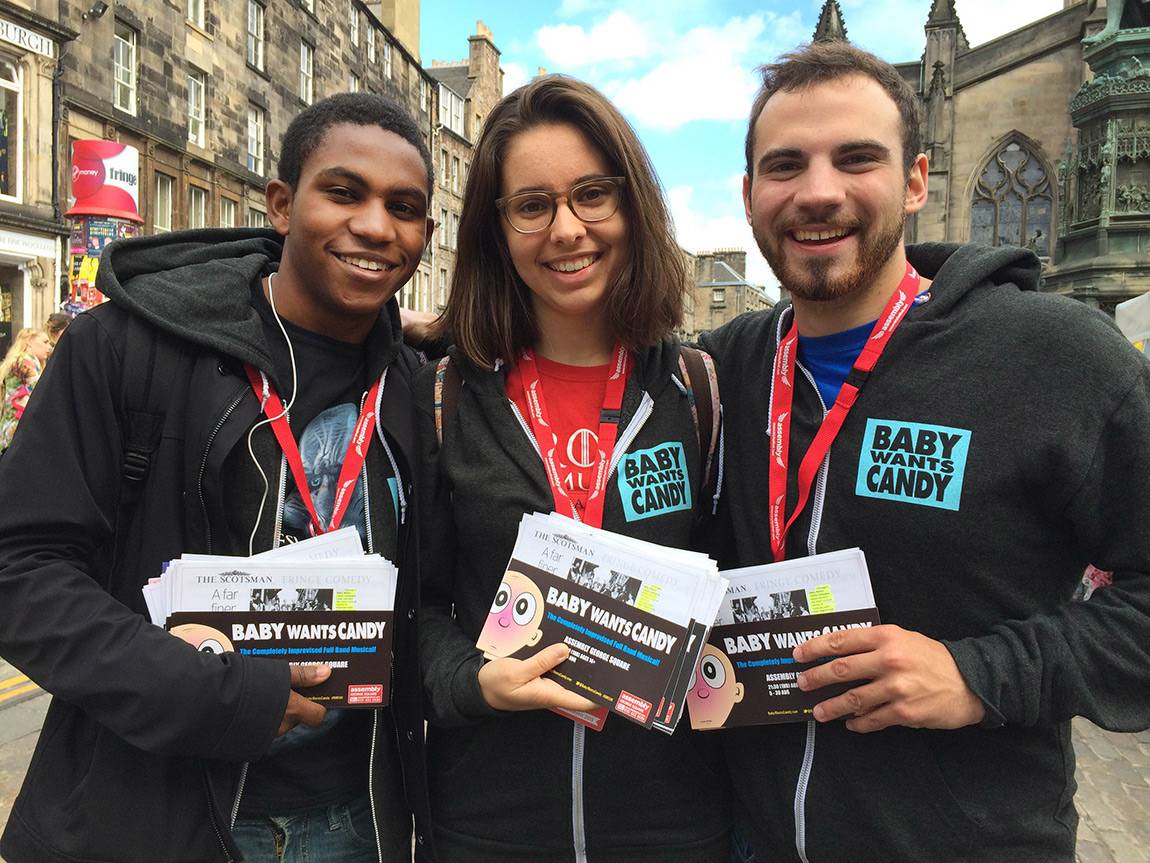 Princeton alumni Chris Murphy (left), Katherine Clifton and Jake Robertson, all members of the Class of 2015, take to the busy thoroughfare of the Royal Mile in Edinburgh, Scotland, for "flyering" — handing out flyers — as part of their internship with the musical comedy troupe Baby Wants Candy, in August. The interns also filmed performances, altered costumes and helped with light and sound effects. (Photo courtesy of Chris Murphy, Class of 2015)

Katherine Clifton, 2015 alumna, English major with a certificate in theater

The festival is a massive affair! There are roughly 50,000 performances of 3,000 shows by companies from around the world in four weeks. As BWC interns, we assisted with marketing by "flyering" — distributing flyers and candy (or, as they are called here, "sweets") in thoroughfares in Edinburgh. We also helped with tech — loading in and loading out the set for BWC's improvised musical every night, roughly 25 shows. We filmed performances, altered costumes and helped with light and sound effects. BWC also wrote and performed "Thrones, the Musical," a musical parody of "Game of Thrones," every day. Both were sold out after the second preview.

A highlight for me took place during a flyering shift. I met an older theater artist who had been performing in or producing shows for the Fringe for more than 30 years. We discovered we have similar conceptions of theater's potential to effect social change, and we continued our conversation over tea after my shift. He offered me a ticket to an overtly political performance which, as I later learned, he produced. After the show concluded, he introduced me to the director and actors and we discussed the merits and drawbacks of political theater. This set of encounters is indicative of the palpable, heartening and infectious passion for the arts that most Fringe performers and spectators share with one another throughout the month.

Theater felt more alive and impactful at the Fringe than anywhere else I've been. The festival reminded me of one of the main reasons I'm so energized by performance: theater demands the audience's complete attention, which few things do in this day and age. You cannot mute, pause or rewind a play; stubbornly tethered to the time and place, theater requires us to listen and to imagine.

The internship was the ultimate prologue to a project I will undertake this coming year. As a senior, I was awarded a Dale Fellowship [awarded by the Office of the Dean of the College] that will enable me to create and stage a documentary play to explore longstanding ethnic tensions between the Serb and Romani people. Interviews I conduct with Romani and Serbian individuals of all ages will provide the text for the play, which will be formatted as a series of monologues that interlace segments of interviews to draw out underlying themes and individual experiences. I was first inspired to write a play about hostility between the Serbs and Romani people while participating in Princeton's Bridge Year Program [a tuition-free program that allows a select number of incoming freshmen to begin their Princeton experience by engaging in nine months of University-sponsored service at one of five international locations]. The internship enabled me to dedicate an entire month to theatergoing, a rare and fortunate occasion. 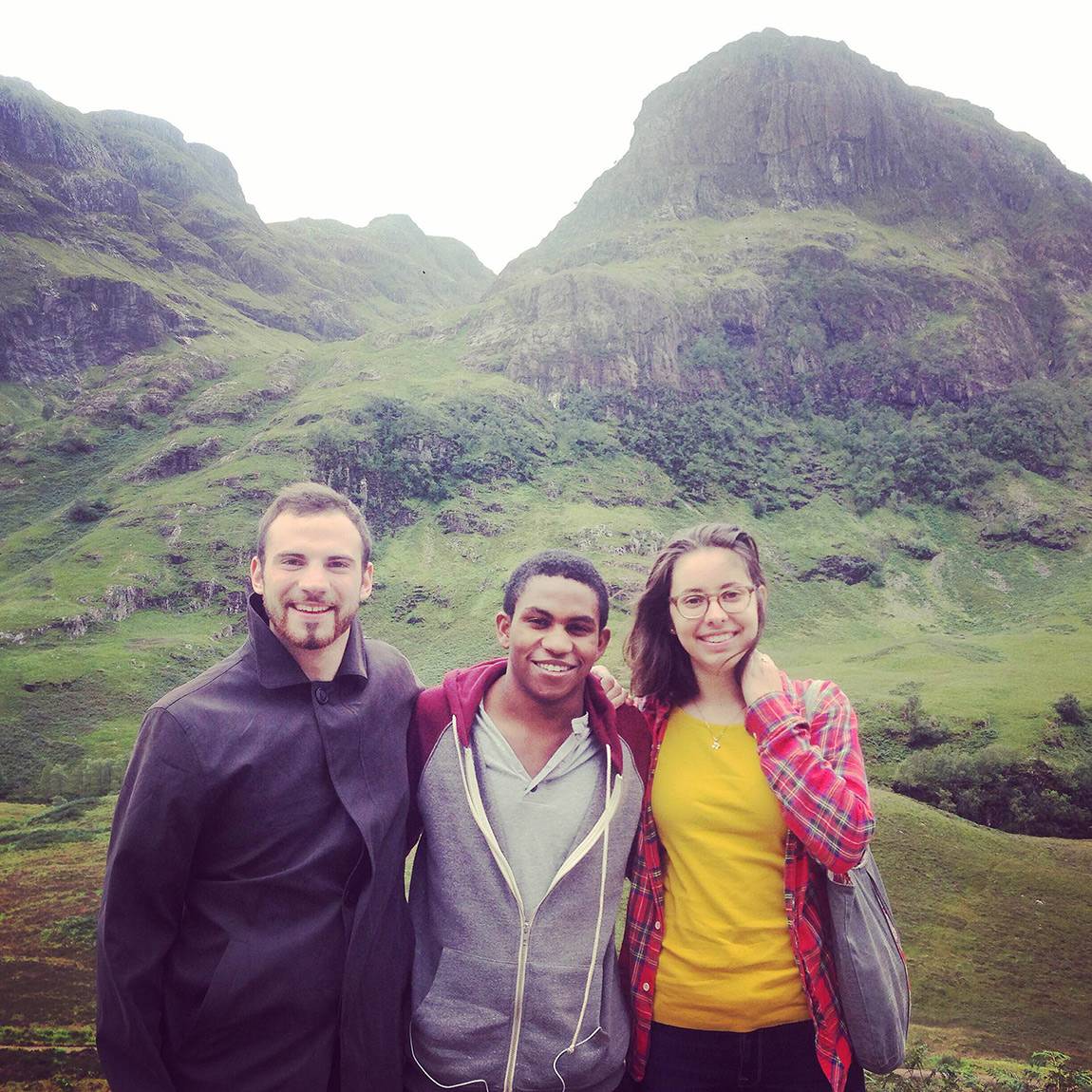 Robertson (left), Murphy and Clifton enjoy some time off from their internship duties with a hike in Glencoe in the Scottish Highlands. (Photo by Chris Murphy, Class of 2015)

There were hundreds of options and choices of shows you could see every day. It was almost overwhelming. The highlight of the internship was definitely getting to see the large amount of very diverse theatrical pieces over one month in any category of performance you could think of — improv, standup, sketch comedy, concerts, cabarets, musicals, dramas, one man/woman shows, circus, etc.

A defining moment for me was taking a three-day-long improv intensive and then participating in BWC's "Graduation Show." It was an extremely challenging and rewarding experience. Katherine and Carey also took the intensive. We were taught by various members of BWC. Each had their own style of teaching and had us play different games and do different exercises. While we were definitely nervous to do improv in front of an audience after only three days of training, the show went really well. It was a great crash course in improvisation and opened me up to a style of performing that I had yet to experience.

The internship was a great taste of what my life will be like as a working actor. This fall I am starting a position as an academic coach at a private prep school in New York City, and I'm also appearing in an Off-Broadway production of the musical "Urinetown." Getting to appear in the month-long run of "Thrones! the Musical" helped prepare me for the rigors of what it's like to perform a show every day for an extended period of time.

I definitely have a deeper respect of improvisation and how important it is for all actors, whether you are an improviser, a standup, a comedian, or a serious, dramatic actor. The skills that improvisation relies upon — supporting your partner, staying open to new possibilities, thinking on your feet — are so important for any actor to have.

Alyson Beveridge, Class of 2016, majoring in geosciences with certificates in musical performance and theater, participated in the BWC Atelier, and also completed an internship this summer teaching English through music and games to children in Jaipur, India

It was really refreshing to see people doing what they love and making it work. I participated in the advanced longform improv workshop and a short musical improv workshop. Every night when I filmed the BWC shows I would notice things that we had touched on in the workshops, rules that separate great improvisers from mediocre ones.

What really impacted me was the power of deep simplicity in theater. I have a huge challenge ahead of me next year as I begin to rehearse two one-act operas for my combined vocal performance and theater theses. I wanted to do this internship because I thought it would be really fun. What surprised me was how much I learned about acting and performing both from BWC and from seeing great, good, OK and terrible shows throughout the Fringe.

On a practical note I have relearned the importance of name recognition and word of mouth in marketing. We wore our BWC shirts all the time, which led to many people saying that they recognized us from our T-shirts. There were also a ton of people who had heard of our show through word of mouth. Hearing that you'll like something from your friends is much more convincing than any newspaper review could ever be. I will definitely keep these marketing strategies in mind as I go back to Princeton. 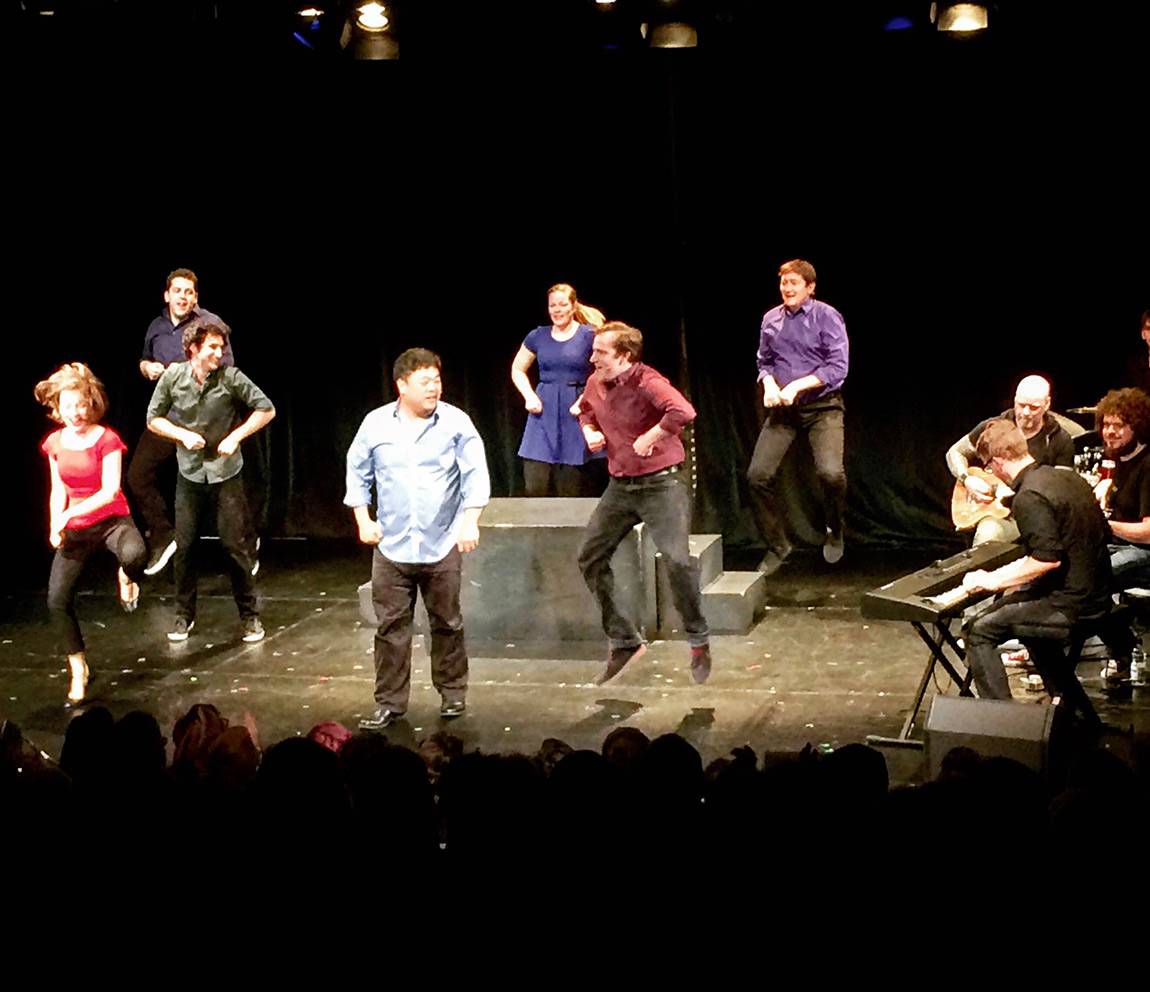 At the Fringe Festival, Baby Wants Candy performs one of its improvised musicals, which features input from the audience, off-the-cuff dance numbers and high comedy. Members of the company taught an atelier on musical improvisation at Princeton in 2014. (Photo courtesy of Katherine Clifton, Class of 2015)

"Flyering" is hard work! A very thankless job! And the living conditions are
cramped (about 18 in one house with one bathroom/shower). However, the most
surprising part was the quick camaraderie that formed among all the interns.

My biggest takeaway from the internship was seeing how the theater world operates on its feet in a professional setting. I met so many working, adult actors and theater creators
who showed me how theater-making in the real world operates. I think it's easy to passively agree with stigmas about careers in theater, but the internship showed me all the opportunities that exist to spend a lifetime making theater.