Editor's note: This feature on a PIIRS Global Seminar on theater in France is Part 1 of a two-part series focusing on two new study abroad courses Princeton offered this summer. In Part 2, you can read about Princeton's first journalism course abroad, in which students honed their on-the-ground reporting skills as they experienced firsthand the refugee crisis in Greece. Discover more about international opportunities for Princeton students at "Learning Across Borders," a student showcase with posters, performances, videos, blogs and artwork, 1 to 4 p.m. Saturday, Sept. 24, at Whitman and Butler colleges. 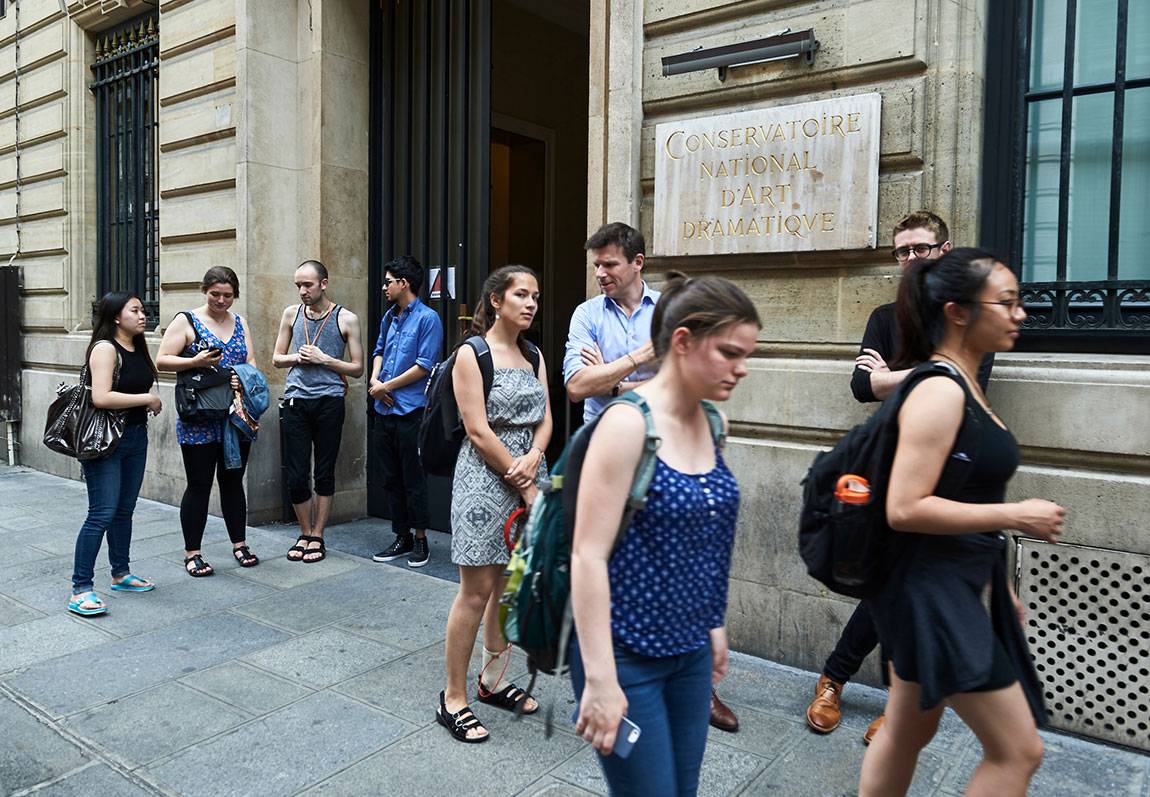 This summer, 15 Princeton undergraduates immersed themselves in the rich tradition of French theater in the first PIIRS Global Seminar to be held in France: "French Theater Today: Practice and Performance in Paris and at the Avignon Theater Festival," taught by Florent Masse, senior lecturer in French and Italian (center, arms crossed). The students gather outside the Conservatoire national supérieur d'art dramatique (National Conservatory for the Dramatic Arts) in Paris, where they spent each afternoon training in the same manner as professional actors at the conservatory. (Photo by Antoine Doyen for the Princeton Institute for International and Regional Studies)

This summer, Selina Pi, an operations research and financial engineering major who also is pursuing certificates in global health and health policy and finance, purposely spent six weeks out of her academic comfort zone — 3,600 miles from home.

Pi, a member of the Class of 2019, enrolled in the PIIRS (Princeton Institute for International and Regional Studies) Global Seminar "French Theater Today: Practice and Performance in Paris and at the Avignon Theater Festival." During the first week of the course, designated the Fish Benoist Family Global Seminar, she got her first assignment, in a studio in the Paris National Conservatory for the Dramatic Arts: Script in hand, she began rehearsing the role of Mariane in a scene from Molière's comedy "Tartuffe" — in French.

Pi, who has studied French since fourth grade but has no theater experience, said she chose the seminar not only because she wanted to step outside her academic concentration but also to continue her French studies in a new setting. "I knew the theater component would make me a more well-rounded and outgoing individual," she said.

Marcelo Jaimes-Lukes, on the other hand, also a member of the Class of 2019 and a politics major who is pursuing certificates in theater and Near Eastern studies, was looking for an opportunity to blend his academic interests. He enrolled in the seminar, Princeton's first Global Seminar in France, "because I am interested in bridging political divides through storytelling in theater," he said.

Pi, Jaimes-Lukes and 13 other Princeton undergraduates embarked on a journey from the heart of Paris to the countryside of Avignon to immerse themselves in the rich tradition of French theater from the historical to the contemporary, and from the practical to the conceptual. Other majors represented by the students include neuroscience, computer science, English, comparative literature and anthropology; in addition to Jaimes-Lukes, four also are pursuing a certificate in theater. 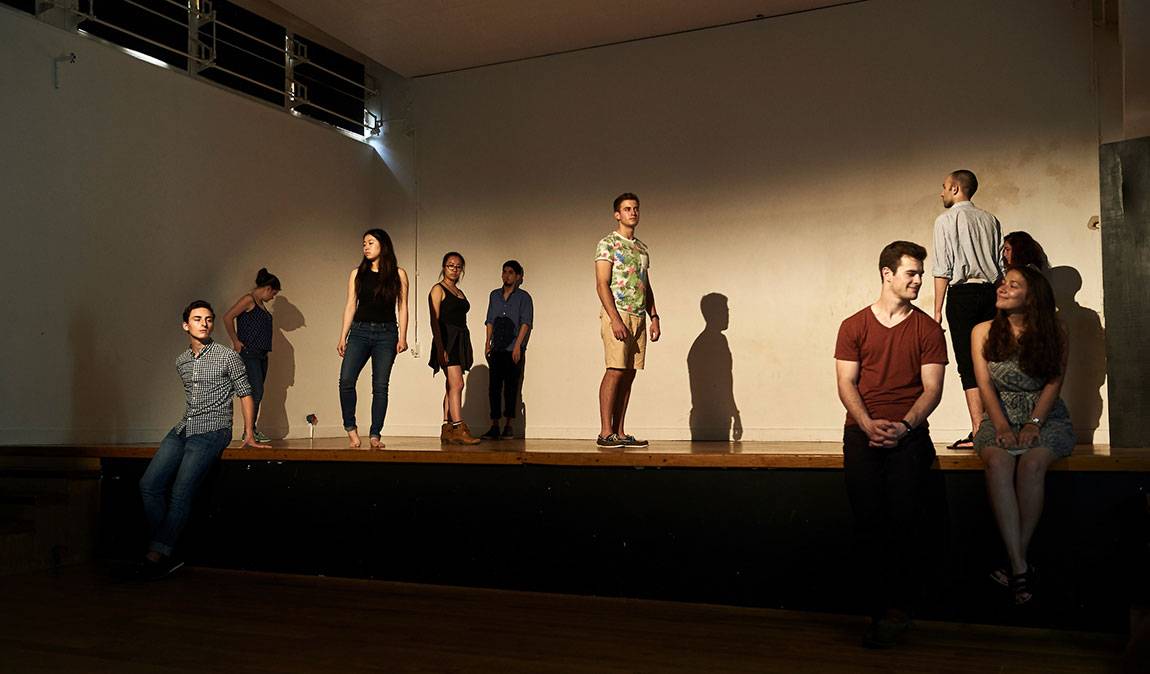 In their own studio at the Paris National Conservatory for the Dramatic Arts, the students rehearse scenes in French by classic playwrights including Molière and Racine. (Photo by Antoine Doyen for PIIRS)

Mornings began with a French language class at the Cité Internationale Universitaire de Paris — an international campus in the south of Paris, where the students lived — taught by Macs Smith, a Ph.D. student in French and Italian. A specialist in Parisian architecture, Smith also took the students on historical tours of the city.

In the afternoon, students took the Metro to meet Florent Masse, a native of Lille, France, and a senior lecturer in French and Italian at Princeton who led the seminar, at the Paris National Conservatory for the Dramatic Arts.

Masse said these intensive afternoons of theater worked the students in the same manner as professional actors who train in Paris.

Sam Gravitte, an anthropology major who is pursuing certificates in theater and music theater and has acted in several productions at Princeton, had never taken French before enrolling in the seminar.

"I had to understand each word in the French texts before I could even begin working with a scene partner," said Gravitte, a member of the Class of 2017 who credits Smith and Masse for helping him with the language and the rhythm of speech. "The French value textual work above psychological realism or any Western methods that I had been aware of before this summer. It taught me to take my time and to really understand what I was saying."

Every day included a speaker — an actor or director from a play that the students would see at night. One visitor was actor Matthieu Sampeur, who was appearing in "The Seagull" at Théâtre National de l’Odéon, directed by the German director Thomas Ostermeier.

"Matthieu gave us invaluable advice on the rehearsal and production process and how to work on roles and prepare performances that feel true," Masse said.

That evening the students saw the production. "At the end of the seminar, we all agreed it was the best of the 35 plays we saw in total in six weeks," Masse said. Ostermeier came and spoke to the class when they were in Avignon. 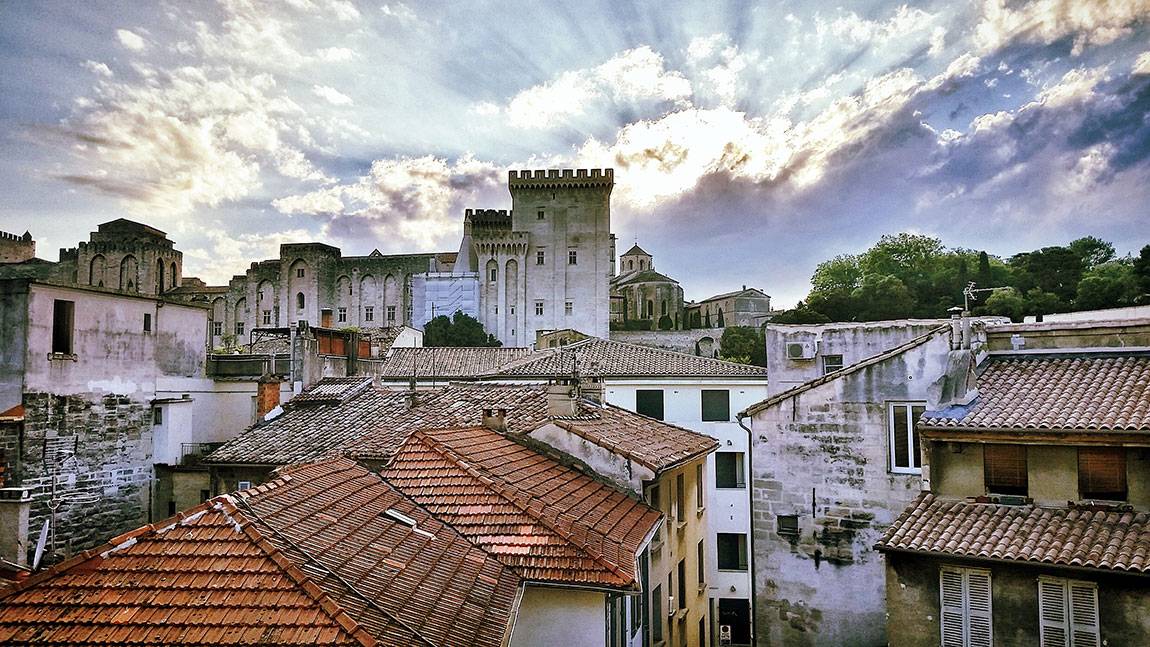 The group spent three and half weeks at the Avignon Theater Festival in the medieval town of Avignon in Provence. In between workshops, master classes, scene rehearsals and attending plays, students enjoyed time off to explore the town. (Sarah Pan, Class of 2019)

The group spent three and a half weeks at the festival, established in 1947 in the medieval town of Avignon in Provence. The festival features French theater but also draws an international coterie of directors from throughout Europe and — with the festival's focus this year on the Middle East — Syria and Iran, among others, Masse said.

Students continued their morning language class and afternoon seminars, often working on their scenes in the garden at Le Complot, the house where they stayed. "Working outdoors is just like the festival," Masse said. "You go see plays outdoors at night." 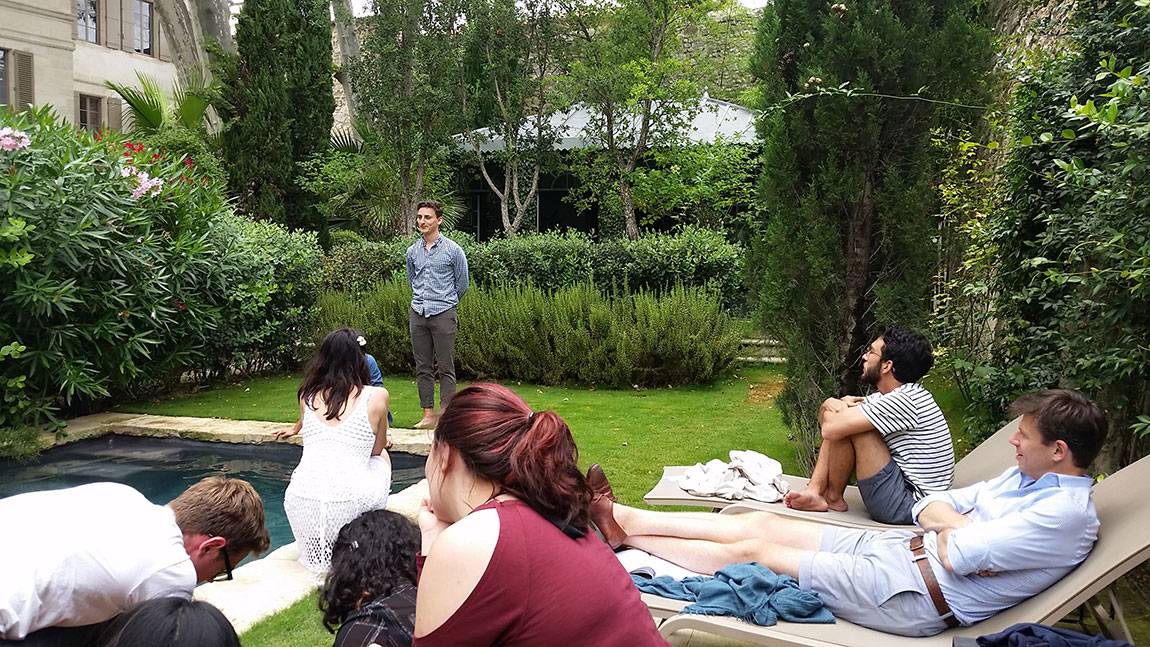 Benjamin Diamond, a member of the Class of 2019, rehearses a scene in French in the garden of Le Complot, the house where the students stayed while attending the Avignon Theater Festival. (Photo by Sarah Pan, Class of 2019)

In addition to scene work and workshop participation, assignments included a wide variety of readings, keeping a journal of reviews in the style of publications such as Le Monde or The Guardian, short reflections on work performed by peers and seen in theaters, post-show discussions and a final paper.

Guest speakers included well-established and early-career artists who led master classes and discussions on "burning questions in contemporary French theater such as the lack of diversity on the French stage," Masse said.

One artist was Comédie-Française star Guillaume Gallienne, a cast member of "Les Damnés," a politically charged play about the rise of Nazi Germany considered the centerpiece of the festival, according to Masse. The group observed a dress rehearsal before attending a performance.

Jaimes-Lukes found the master class with Gallienne inspiring. "Not only did he provide perspective as an experienced thespian, but he was able to give advice on how to live our lives as full appreciators of beauty and art in our daily lives," he said. 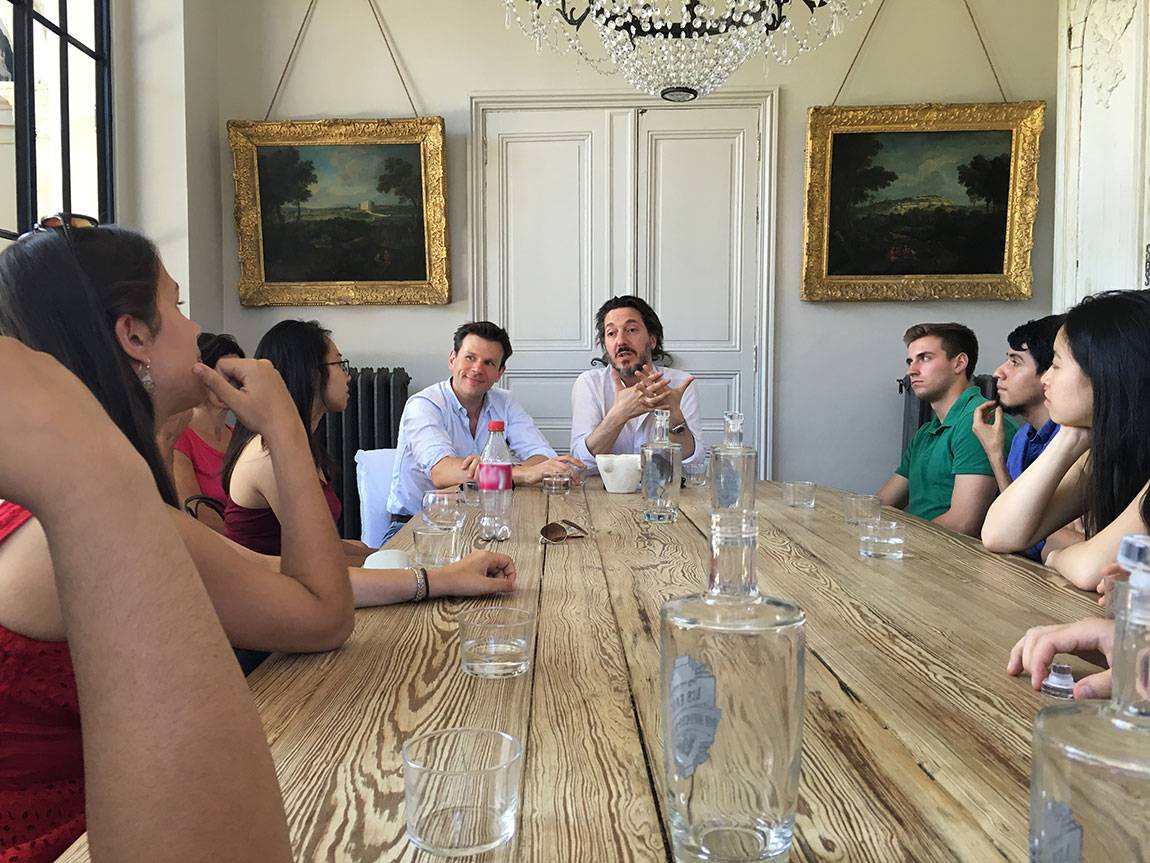 In both Paris and Avignon, guest speakers included well-established and early career artists, including actors and directors. Above: Comédie-Française star Guillaume Gallienne, center, who was appearing in "Les Damnés" at the festival, answers students' questions during an informal afternoon at Le Complot. (Photo by Selina Pi, Class of 2019)

The political impact of the shows struck a resounding chord in the students.

Jaimes-Lukes called the festival "an eye-opening experience because of the wealth of hard-hitting and overtly political productions — many of them leaving a lasting emotional impact on me."

Gravitte, who plans to pursue a career as an actor, agreed. "The French have an interesting distinction in theater — between what they see as merely 'entertainment' and what they see as 'art.' It made me want to make work that fell under that second category, shows that people would leave buzzing with excitement, as we so often did in our six weeks," he said.

Pi said seeing "Les Damnés," with Belgian director Ivo von Hove's signature evocative staging, was the highlight of the seminar. The play was staged in the festival's main venue, Cour d’honneur, which Pi described as "an immense courtyard that holds 2,000 people, open to the night sky and encircled by the soaring stone walls of the 14th-century Papal Palace of Avignon.

"After a shocking tarring-and-feathering scene, it was chillingly beautiful to see the wind lift the loose feathers off stage and high above our heads, where they hung for a moment before settling quietly and slowly on the audience," Pi said. "Seeing nature break the fourth wall and implicate the spectators in the disturbing events on stage like this was something I'd never experienced with a live performance before." 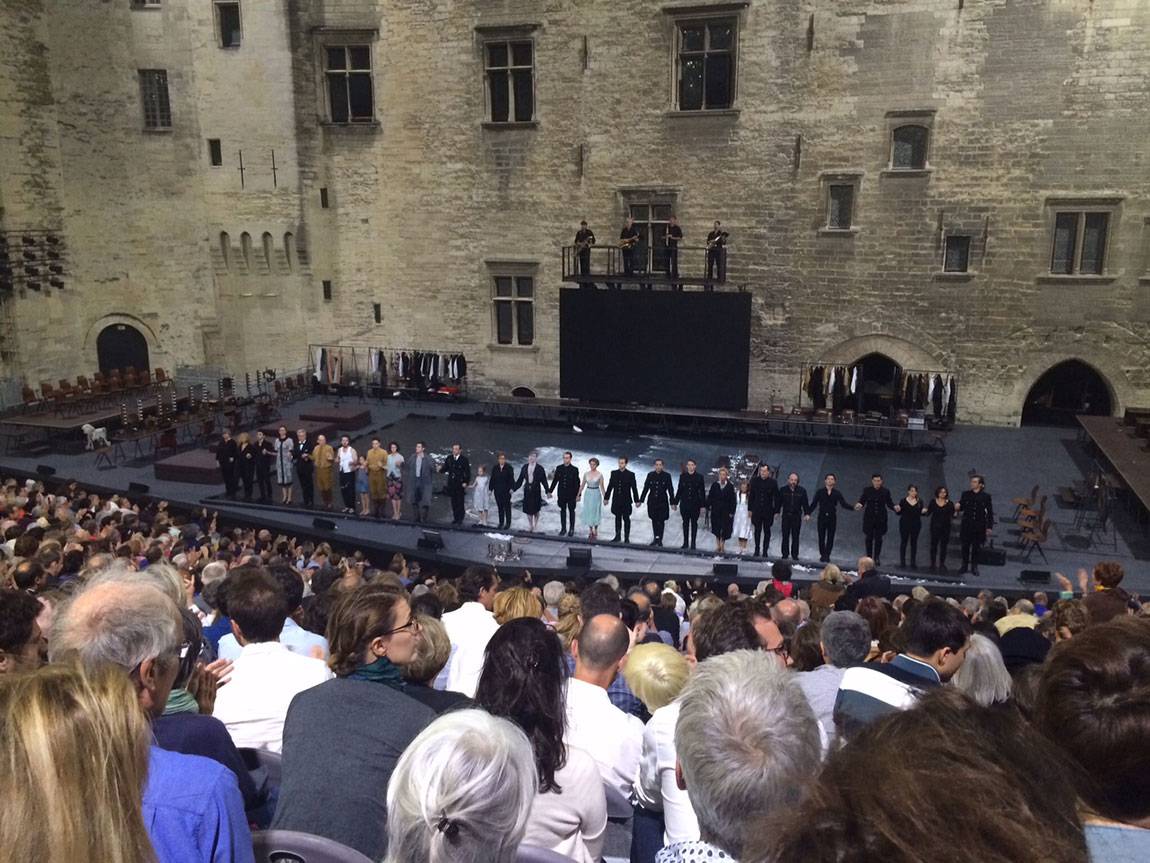 The cast of "Les Damnés," directed by Ivo von Hove, takes a bow in the festival's main outdoor venue, Cour d’honneur, which holds 2,000 people. (Photo by Florent Masse, Department of French and Italian)

The seminar also prepared the students for the French Theater Festival of L’Avant-Scène, Princeton French Theater Workshop, which Masse founded 15 years ago. L’Avant-Scène offers students an original combination of linguistic and dramatic training, offered exclusively in French, with student performances throughout the academic year. The French Theater Festival, cosponsored by the Lewis Center for the Arts, brings leading French actors and directors to Princeton for performances of contemporary French works. It is "Princeton's reflection of how welcoming France is to the international theater community," said Masse, who established the festival in 2012. The festival runs Sept. 22 through Oct. 6, at venues across campus. While most performances will be in French, three productions will include English supertitles and one will be presented in English.

"At the French Theater Festival, the students will find elements they discovered in Avignon such as nontraditional forms of theater that make you think," he said.

Masse believes the experience of the global seminar will have a lifelong impact on the participants — no matter what their major. "This experience is something that's going to mark them — in terms of the culture, all the theater they saw, all the art they were exposed to. It opened up so much," he said.