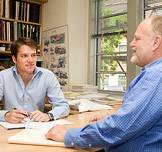 Holger Staude (left), an economics major from Frankfurt, Germany, will deliver the class of 2009 valedictory address at Commencement on June 2. In rising to the top of the senior class, Staude has found outlets for his many academic interests by pursuing certificates in environmental studies, finance and musical performance. Here, he speaks with economics professor Henry Farber, his senior thesis adviser, about his project, which investigates the impact of environmental regulation on the stock performance of electric utilities. Photo: Brian Wilson

Also speaking at the Commencement ceremony will be Stephen Hammer, a classics major, who is the salutatorian of the class of 2009. He will continue the tradition of giving a speech in Latin. Hammer plans to serve in the U.S. Army after two years of postgraduate study at the University of Oxford as a Rhodes Scholar. Read more about Hammer in a related story. Photo: Brian Wilson

On his first day of classes as a freshman, Holger Staude received an unexpected invitation. Florent Masse, the instructor of his advanced French course, took Staude aside after class and -- impressed with the German native's command of the language -- urged him to join the University's French theater workshop.

Staude had never considered acting. Yet, just as he did in deciding to attend Princeton, he accepted the challenge and thrived.

Several starring roles later, Staude received an offer to study acting for a year at the prestigious Paris National Conservatory for Dramatic Arts after his graduation from Princeton this spring. He made the difficult decision to pass on that opportunity to pursue a career in economics, his foremost academic passion.

Staude's prowess as a performer -- he also is an accomplished pianist -- is matched by his exceptional scholarly achievements, which have earned him the honor of valedictorian of the class of 2009. An economics major and certificate candidate in environmental studies, finance and musical performance, he will deliver the valedictory address at Princeton's Commencement ceremony on June 2.

"My interactions with Holger are perhaps best characterized as a series of pleasant, and sometimes breathtaking, discoveries," said Scott Burnham, professor of music. "In my Beethoven class, I discovered that Holger writes very well about music and ideas (amazingly well for a non-native speaker of English). Then I heard him play the piano and was taken aback again. In my music theory course, I discovered that Holger could write very accomplished music in the style of the composers we were studying. After that, I was astonished to find out that this young man from Germany has been acting regularly in Francophone theater. And of course he is majoring in none of these things, being a standout star in economics.

"But the best thing of all has been what I discovered first about Holger: He is refreshingly unassuming, comfortable with who he is and generous with everyone else," Burnham said.

By engaging his varied academic interests as well as discovering new pursuits such as acting, Staude has realized the vision for his college experience that led him to select Princeton four years ago, despite never having set foot in the United States.

Finding his way at Princeton

Born and raised in Frankfurt, Staude began learning English after eighth grade and two years later left to study in Wales, where he graduated from the United World College of the Atlantic. The United World Colleges are international schools where students live and study together in an environment that stresses global understanding and community service.

In preparing for college, Staude said, "I always knew I wanted to study economics, but I also knew that I wanted to explore its intersection with various disciplines, especially environmental science and finance. The opportunity to combine these different disciplines in a liberal arts education was what attracted me to the United States.

"When I applied to Princeton, I had never been to the states before, so that was an adventure and a challenge -- to see a new continent, meet new people and come to school here," he said.

Staude's transition to life at Princeton was swift, both socially and academically. "I was very surprised at how welcoming everyone was from the very first day," he said, noting that the University's pre-orientation program for international students "really helped me find my way into Princeton and in the United States."

What he found was an intense but supportive environment.

"You have some of the smartest people from around the world here -- both the faculty and the students -- and they've been an immense source of inspiration," Staude said. "Before I came here I thought there would be a lot of competition and people wouldn't be willing to share their insights. That really has not materialized at all. I've found that you can learn the most from conversations with your fellow students and with faculty members."

Staude has been recognized for his academic accomplishments with some of Princeton's highest undergraduate honors. A two-time winner of the Shapiro Prize for Academic Excellence, he also shared the George B. Wood Legacy Sophomore Prize and the Class of 1939 Princeton Scholar Award, and was elected to Phi Beta Kappa. He stands atop the senior class with its highest grade point average and greatest number of A+ and A grades. 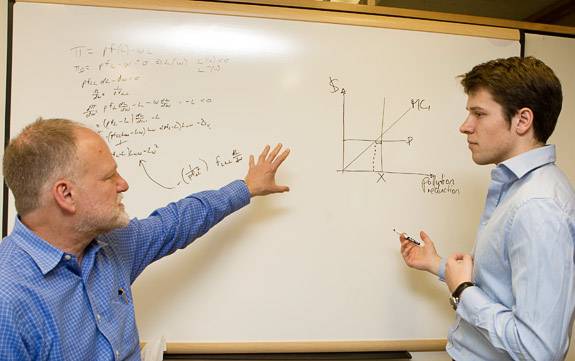 Farber said Staude's senior thesis, which combines his interests in economics, environmental science and finance, could be published in a professional journal. Farber has enjoyed discussing economics and other subjects with Staude. "He's a very mature young man," Farber said. "He's been an absolute pleasure to spend time with." (Photo: Brian Wilson)

His senior thesis, which examines the impact of the Clean Air Interstate Rule of 2005 on the stock performance of electric utilities, is "really a professional piece of work," said adviser Henry Farber, the Hughes-Rogers Professor of Economics.

The topic allowed Staude to blend his interests in economics, finance and environmental studies. Farber said it could be published, with just minor modifications, "in a serious professional journal. It's an important piece of evidence on the role of environmental regulation in terms of firm performance. He makes the really interesting point that most people assume that all environmental regulation is bad for value, but he shows quite convincingly that in a world where you realize there is going to be regulation, some regulations are better than others."

Farber said he has enjoyed his time with Staude discussing economics and his wide range of interests. "He's a very mature young man. He's been an absolute pleasure to spend time with. I've seen him perform his music, which is startlingly good. I look at him and think, 'Boy, I couldn't even have gotten into Princeton when I was a kid -- and look at this guy!'" Farber said.

Staude met regularly not only with Farber while researching and writing his thesis, but also with fellow certificate candidates in the Program in Environmental Studies as part of a weekly senior colloquium led by lecturer Xenia Morin. "That really forces you to explain your research to people who are not in your field. You can have students in all sorts of majors -- religion, music, chemical engineering -- challenging you to talk about your own research in a way that everyone would understand," Staude said.

For Staude, his thesis project was a highlight among many "incredible opportunities" he has experienced at Princeton.

The summer after his sophomore year, Staude and a friend from Germany, Sebastian Olbrich, spent six weeks hiking across Iceland and created a one-hour documentary film about their expedition. Upon returning to campus, he mentioned the trip to Professor Harvey Rosen, one of his mentors in the economics department and the master of Whitman College, where he has lived for the past two years. Rosen encouraged him to present a screening of the film at Whitman.

"I showed the movie and received a lot of very good comments," Staude said. "It was great to see that Princeton is interested even in what you do during your summers, and there is always a forum to show what you've been doing." 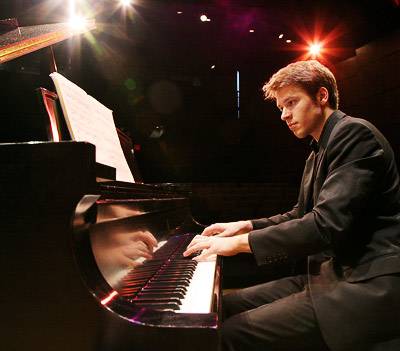 Princeton audiences also have enjoyed Staude's considerable talents as a pianist. He has been playing since age 5, but did not perform or take piano lessons during his freshman year.

"One day I was in the music department and -- not having played for a couple of months -- I remember sitting down at the piano and thinking to myself, 'This is something I'm going to miss.' Then I enrolled in a music class and decided to audition for the certificate program," he said.

Staude has performed with various chamber music groups and in recitals as a soloist and accompanist, and his most prominent role has been with the University Orchestra. This year he was one of three winners of the annual University Concerto Competition, which led to a featured performance of Mozart's Piano Concerto No. 20 in D Minor at Richardson Auditorium in March.

In the classroom, Staude was inspired by a course on Beethoven co-taught by Burnham and internationally acclaimed pianist Robert Taub, which provided scholarly and performance perspectives on the composer's work. He also was challenged by assignments in his music composition course with Burnham.

"I've been playing Mozart and Beethoven sonatas for a long time," Staude said. "But then you're asked to compose simple pieces in the style of Mozart, and you see how hard it really is. It teaches you the utmost respect for these composers. You see how it takes you days, maybe a week, to compose a one-sheet piece of paper, then you look at what Mozart composed when he was 16 years old -- it makes you very humble." 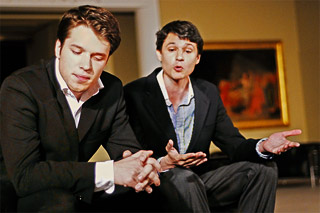 With the French theater workshop L'Avant-Scène (formerly known as L'Atelier), Staude performed in seven plays in French. While acting was new to Staude, he quickly rose into advanced roles, said Masse, a senior lecturer in French and Italian who founded the theater group in 2001. His first lead role, as a sophomore, was in Jean Racine's tragedy "Phèdre," which is "considered quite a difficult play in the French theater canon," Masse noted.

"Holger's music experience has brought much to his acting style. His greatest qualities as an actor are his intelligence as a reader of text, his extensive musical experience, a strong stage presence and a sensitivity to the richness of texts and their inner musical qualities," he said.

Masse accompanied Staude to Paris for two weeklong immersion programs at La Comédie-Française and at the Paris National Conservatory for Dramatic Arts, which offered him admission for postgraduate study. "This opportunity to enter the conservatory next year, if he had chosen to go, is a great endorsement of his development as an actor for the past four years," Masse said.

Staude grappled with the decision of which path to pursue immediately after graduation, but felt he would benefit most taking an offer of a research position with the merchant bank Allen & Co. in New York.

"Ultimately, I am interested in doing research and enrolling in a Ph.D. program, and perhaps at some point teaching," he said, noting that he would like to continue to focus on environmental issues. "This opportunity to work in New York City -- to do research in a real-world setting to approach real-world problems -- will be very helpful as I prepare for my career."