After debuting their production of "Assassins" at the Edinburgh Fringe Festival in Scotland this summer, the Princeton University Players will perform the well-known musical on campus Sept. 27-29 and Oct. 4-6. Edinburgh, home to the largest arts festival in the world, marked the first time the student theater troupe performed abroad in its 26-year history.

Fourteen Princeton students who made up the show's cast and crew traveled this August to Edinburgh, where they joined thousands of musicians, actors, comedians, dancers and more performing on stages and at street corners. The trip provided an opportunity to share their work with a bustling, international audience and experience art of all forms.

"It was fabulous to see how universal theater and entertainment truly are," said junior Izzy Kasdin, who co-directed the show. "Walking around the city we saw traditional South Korean dancing next to comedians shouting out in thick Irish brogues. I felt like I'd become part of not just a Princeton theater community, but a global theater community." 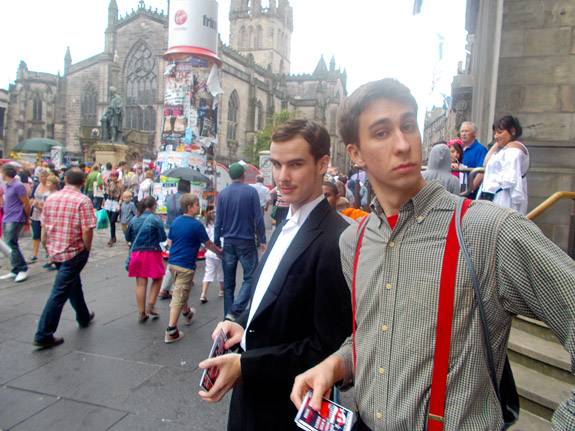 Junior Evan Thompson (left) and senior Adam Stasiw (right) hand out fliers at the Edinburgh Fringe Festival for the Princeton University Players' production of "Assassins." The student theater troupe traveled to Scotland this summer to debut the well-known musical before performing it on campus Sept. 27-29 and Oct. 4-6. (Photo courtesy of Princeton University Players)

Translating the dark musical comedy to a largely non-American audience also inspired the students, Kasdin said. "Assassins," with music and lyrics written by Stephen Sondheim, goes into the minds of individuals who have killed or attempted to assassinate U.S. presidents.

"One of the most rewarding parts of being at an event like the Fringe was the ability to draw in people we did not know," she said. "When we perform on campus, the audiences are pretty much filled with friends and family. In Scotland, we had to start from scratch."

Co-director and junior Lily Gold said it was up to the students to manage every aspect of their trip to Edinburgh, from securing a venue and setting up their stage each day, to promoting "Assassins" in the streets among the din of festival attendees.

Gold said their hard work paid off: All six performances sold out and the Princeton University Players received a four-star review in the Broadway Baby Edinburgh Review, which covered more than 1,900 festival shows for its website and paper.

"We went to Scotland for the challenge of managing a production at a major international event and the experience of being among artists from around the world," she said. "It was a bonus, and completely humbling, to also be recognized by critics and audiences."

She added that the University's Lewis Center for the Arts, the Office of the Dean of Undergraduate Students and the Program in American Studies helped support the group's trip.

The students said they look forward to bringing the energy and verve of the Fringe Festival to their performances at Princeton.

The Princeton University Players will present "Assassins," at 8 p.m. Thursday through Saturday, Sept. 27-29 and Oct. 4-6, as well as at 2 p.m. Saturday, Oct. 6, in the Frist Campus Center Film and Performance Theater. Tickets are $8 for students, $10 for senior citizens, faculty and staff, and $12 for the general public, and may be purchased through University Ticketing online, at the Frist Campus Center ticket office or by calling 609-258-1742. 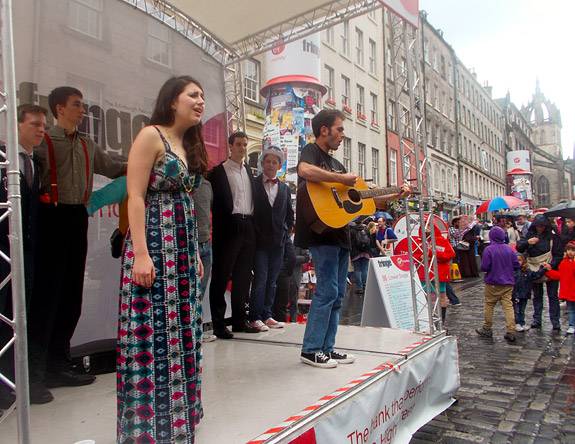