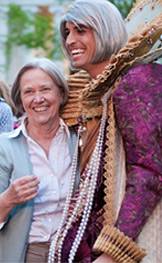 Princeton Arts Weekend, April 25-28, showcased the talents of hundreds of students with nearly 70 events. The last day of the festival coincided with Communiversity, an annual event that brings together thousands of members of the town of Princeton and the University community. Also on Sunday, a student tribute to President Shirley M. Tilghman — pictured above with Connor Diemand-Yauman, a member of the Class of 2010 who wrote and performed a skit for the tribute — honored her commitment to the arts.

From South Asian theater to gravity-defying breakdancing, the first Princeton Arts Weekend, April 25 to 28, invited members of the Princeton community to immerse themselves in the arts with nearly 70 events indoors and out — and in some cases all through the night.

Four days of sunny spring weather set the stage to showcase the talents of hundreds of students and dozens of student groups. Organized by the Office of the Dean of Undergraduate Students, the long weekend also honored Princeton President Shirley M. Tilghman and her commitment to the arts. The festival concluded on Sunday with a student tribute — affectionately dubbed Shirleypalooza — to Tilghman, who is retiring as president at the end of the academic year. 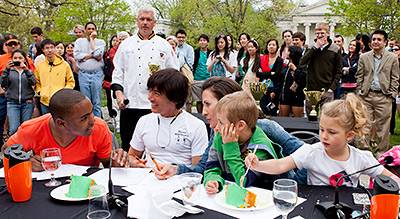 The judges in the "Iron Tiger" cake competition confer on the merits of fondant and other delights. They are (left to right) Shawon Jackson, Class of 2015 and president of the Undergraduate Student Government; Jeff Nunokawa, professor of English and master of Rockefeller College; and field hockey coach Kristen Holmes-Winn with her children.

On a stage behind Nassau Hall, students sang, danced, acted, joked and read poetry in Tilghman's honor while students, faculty, staff and area residents fanned out on Cannon Green to watch. Before the show, students decorated cakes with Princeton themes.

"Our cake is called Shirley's Castle because Princeton has been a fairytale experience for us," said Tiantian Zha, who with fellow seniors Hanna Tian and Xiang Ding teamed up in a cake-decorating contest organized by Dining Services. The other cakes displayed tiger stripes and a molecular structure, the latter judged the winner and a nod to Tilghman's expertise in genetics. That cake was emblazoned with the phrase "Under Shirley's Power, We Flourish," an adaptation of the University motto. 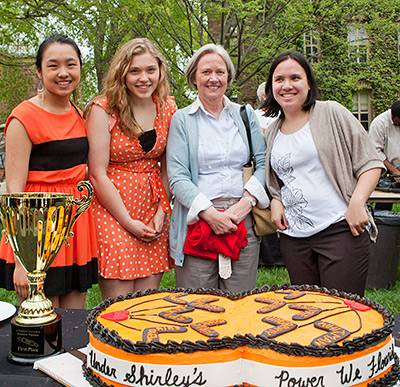 President Tilghman poses for a photo with cake makers (left to right) Angela Wang, Jana Suriano and Cecily O'Leary, members of the Class of 2016, after they were declared winners of the "Iron Tiger" competition.

The entertainment on Sunday kicked off with the singing of the Canadian national anthem for the outgoing president, a native of Canada, and ended at dusk with members of the Princeton Triangle Club leading the crowd in singing "Old Nassau." Tilghman watched, laughed and applauded from the front row along with Provost Christopher L. Eisgruber, who will succeed her as president July 1, and with other University members and their families.

In her support for the arts at Princeton, Tilghman has said, "To be human is to make art," a credo that was illustrated with a vibrant palette of creativity and inspiration throughout the weekend. The arts showcase coincided with the annual Communiversity celebration, bringing together thousands of people from the University and the town of Princeton to eat, shop, listen to music and enjoy arts and crafts along Nassau and Witherspoon streets, at Palmer Square, and on the lawn in front of Nassau Hall. 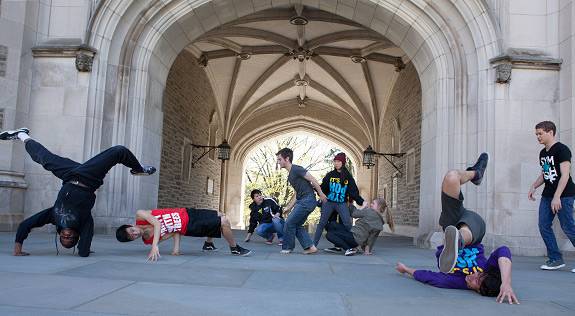 Members of the breakdancing troupe Sympoh defy gravity during their performance under Blair Arch.

Arts weekend events ranged from an all-night collaborative storywriting project to a show-tune piano marathon to a flashlight tour of outdoor sculpture at night. Offerings featured original student works including dance, plays and art exhibitions. The Princeton University Orchestra, Glee Club and Chapel Choir performed together, and Princeton's many a cappella groups could be heard under theater lights — and moonlight.

Princeton Arts Weekend reflected Tilghman's goal that all students, no matter their major, become involved in the arts at Princeton. 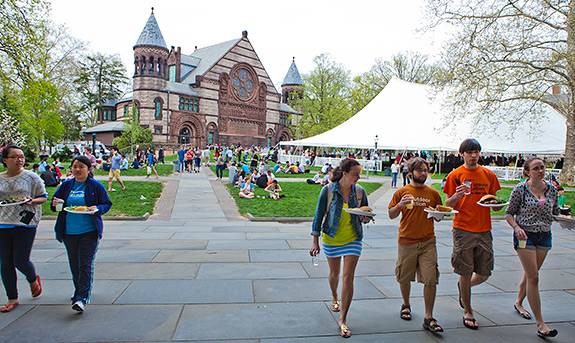 At a special dinner in President Tilghman's honor, students picked up picnic dinners under the big tent on Alexander Beach and dined on the lawns and steps of campus.

For example, the four members of the alternative rock band Burne Holiday — who played tunes from their upcoming album "Upstanding Young Gentlemen," on the Frist Campus Center south lawn — include economics majors Joe Edelmann and Cory Furlong, both seniors; junior Nathan Tyrell, a mechanical and aerospace engineering major who is also pursuing a certificate in visual arts; and Javier Masis, a senior concentrating in molecular biology with a certificate in neuroscience.

The fact that Tilghman is a molecular biologist has not gone unnoticed by Masis, who handed in his thesis "Occluded Motion in the Retina" two days before the band's performance. "I'm very proud to have had a University president who is very successful in a traditionally 'hard' subject remind us of the importance, validity and meaning of artistic pursuits," Masis said. 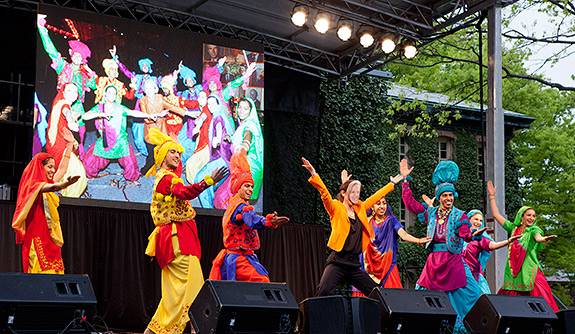 Led by a dancer wearing a Tilghman mask, the Princeton Bhangra troupe goes through a high-energy routine on the stage behind Nassau Hall.

Many students performed multiple times throughout the weekend. Junior Adam Mastroianni, who is a member of the Triangle Club and the improvisational comedy troupe Quipfire!, hosted All Nighter, a late-night talk show, on Friday. On Saturday, he performed with fellow students from the course "How to Write a Song" at Small World Coffee on Witherspoon Street, and on Sunday, he emceed Shirleypalooza. "The arts have meant as much to me as academics at Princeton," Mastroianni said. "I'm a psychology major by day, but an improviser/writer/performer/goofball by night."

Junior Alejandro Van Zandt-Escobar, who helped organize MIMA's (Modern Improvisation Music Association) "interactive media party" — where students collaborated for a night of dance, music, video and visual art improvisation — said Tilghman has created an "interconnected" arts scene at Princeton. "Princeton has expanded my view of what art is and how it can be part of my life in countless ways. As a computer science major, I have been able to apply my technical experience to music and other arts," he said. 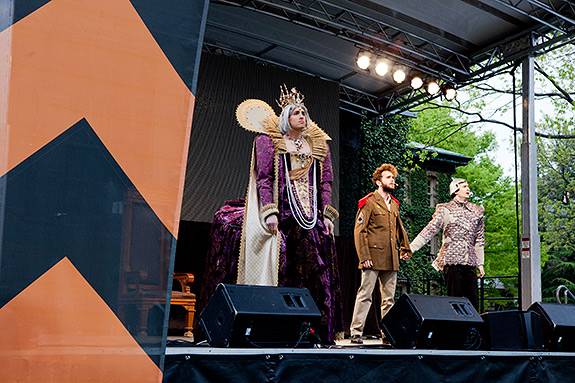 Among the premieres was junior Mark Watter's original play "Sexy Imaginary Friend." "I hope that my show and the other Arts Weekend acts stand as a testament to the environment of freedom and confidence to pursue new artistic paths that President Tilghman has created," said Watter, a concentrator in philosophy who is also pursing a certificate in theater. 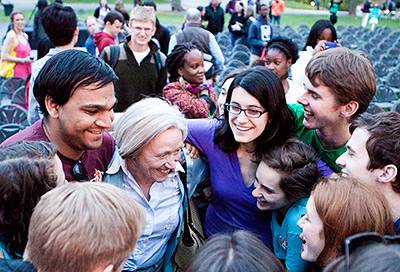 After they led the crowd in the singing of "Old Nassau" to end the tribute to President Tilghman, members of the Princeton Triangle Club surround her on Cannon Green.

Senior Daniel Rattner, a classics major who is pursuing a certificate in theater, also premiered an original play, "O Where Are You Going?" He said he appreciates Tilghman's support of the arts, particularly theater. "The arts have been crucial to my experience at Princeton," Rattner said.

Junior Danielle Holman is president of the diSiac Dance Company, which performed five sold-out shows during the weekend. Holman, a concentrator in the Woodrow Wilson School of Public and International Affairs who is pursuing certificates in teacher preparation and African American studies, said: "We appreciate how much the arts are valued on campus, and the support we have received from President Tilghman and the University have pushed us to become a better company." 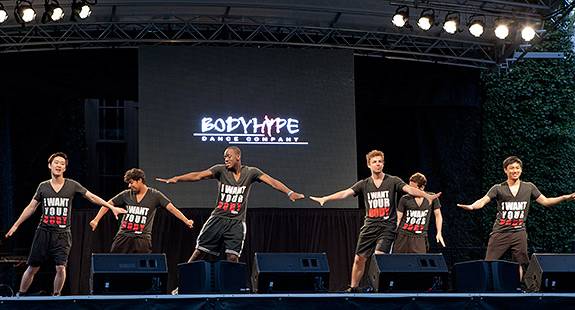 The dance troupe BodyHype takes the stage during the student tribute to President Tilghman. 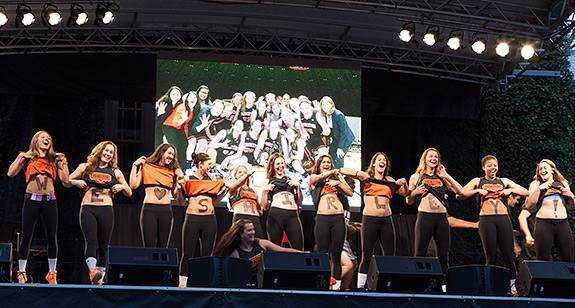 The women's basketball team gives President Tilghman a personalized send-off by spelling out "We <3 Shirley" on their midriffs.