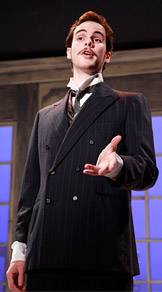 The Princeton Summer Theater is a creative community that showcases a variety of performances. This summer, the company opens its 2012 season with "A Little Night Music," June 21-July 1. The Stephen Sondheim musical, set in Sweden, is a summertime ode to romance. Above, Fredrik Egerman (rising junior Evan Thompson) plans how best to seduce his much-younger wife in the song "Now." 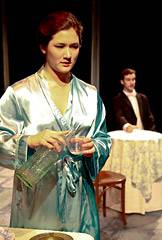 The charismatic actress Desirée Armfeldt (rising senior Sarah-Anne Sillers) pours herself a drink when her former lover Fredrik (Thompson) unexpectedly pays her a visit after seeing her perform. 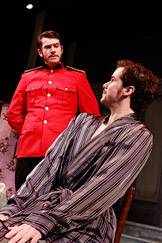 The tension mounts when, from left, Desirée's current lover, the jealous Count Carl-Magnus Malcolm (Andrew Massey) returns to find Fredrik (Thompson) in a state of undress. 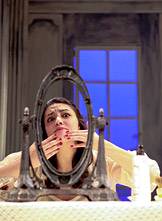 Anne Egerman (2012 Princeton graduate Miyuki Miyagi) primps in front of the mirror before she and her husband Fredrik attend the theater.

To tackle the challenge of producing four plays in eight weeks, the Princeton Summer Theater company annually forms a small community that includes Princeton students, alumni and faculty, as well as local residents and students from other universities.

Adam Immerwahr, associate producer at McCarter Theatre, is crossing the street to the Princeton campus to direct "A Little Night Music," the 2012 season opener, which plays from Thursday through Sunday, June 21-24, and June 28-July 1, at Hamilton Murray Theater.

Set in Sweden, the Stephen Sondheim musical is a summertime ode to romance in all its capricious and poignant iterations, including happy endings.

"Collaborating with such an extraordinary group of Princeton students and recent graduates is a great joy," Immerwahr said. "Their creativity, energy and enthusiasm are inspiring." 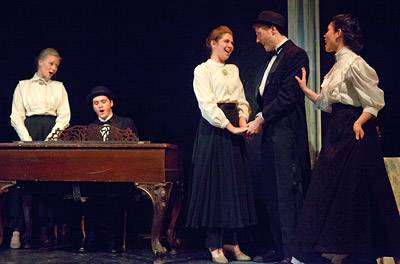 Performing since 1968, Princeton Summer Theater is a student-run company that offers a range of opportunities for students and others interested in pursuing careers in theater and drama. This year, the company has 35 members, including several guest artists appearing only in "A Little Night Music."

"Our theme is the idea of being able to go on a voyage, to different worlds and different time periods," said Princeton Summer Theater communications director Julia Bumke, a rising senior who is majoring in history and pursuing a certificate in theater.

"My first goal in picking the season was to have four shows we had never done before," said artistic director and rising senior Daniel Rattner, a classics major who is also pursuing a certificate in theater. "I wanted to have a great balance: a musical first, then a psychological thriller, then an all-out farce and then a modern masterpiece." 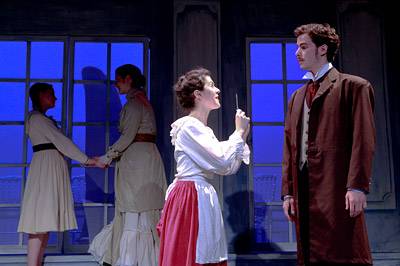 The Egermans' servant Petra (Katrina Michaels) shows Fredrik (Thompson) an invitation to stay at the Armfeldt estate in the song "A Weekend in the Country."

In addition to Immerwahr, the company will draw from the talents of professionals and students from the community. Technical director Jeff van Velsor, who previously has designed stage sets for the company, will design all four sets this season. Van Velsor, the technical director and resident set designer at Princeton Day School, will bring a group of theater tech students who will serve as interns.

Music director Kevin Laskey, a 2012 Princeton graduate from Montgomery Township, N.J., who majored in music with a certificate in musical performance, has assembled the pit orchestra, which includes eight students who perform in University music ensembles. 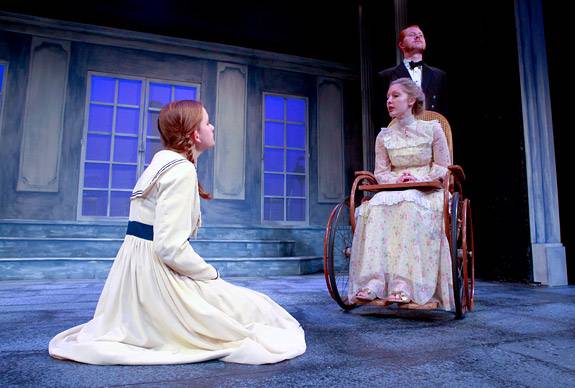 Faculty and alumni always have figured prominently in the Princeton Summer Theater. This summer, R.N. Sandberg, a lecturer in English, theater and the Lewis Center for the Arts, will direct the second show, "Gaslight," a psychological thriller set in London. Sandberg directed the company's production of "The Heidi Chronicles" in 2010.

Richard Greenberg, a member of the Class of 1980, wrote the season finale, "The American Plan," directed by Rattner, which tells the tale of a 19-year-old girl on summer vacation in the Catskills. Greenberg won a Tony Award and was a Pulitzer Prize finalist for his play "Take Me Out" in 2003, and was a Pulitzer finalist for "Three Days of Rain" in 1998.

Princeton Summer Theater's 12-member board of trustees, headed by Tony Award-winning producer Geoffrey Rich, a 1978 Princeton alumnus, is made up entirely of Princeton faculty, alumni and staff.

One trustee, William Lockwood Jr., a 1959 Princeton graduate and special programming director at McCarter Theatre for more than 50 years, has been involved with the company for decades. "Bill has so many connections," Rattner said. "He connected us with Adam Immerwahr. He has an incredible memory for what we've done in the past, and he is crucial to preserving the institutional memory of the theater." 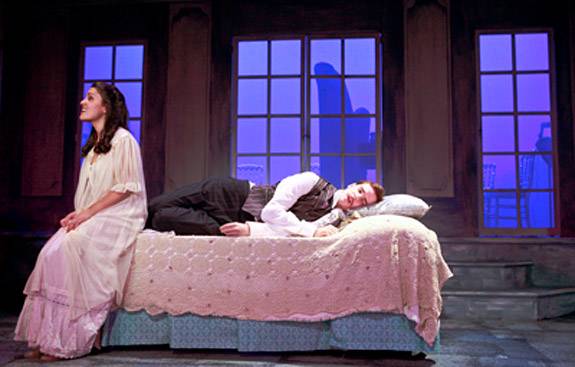 While her husband Fredrik (Thompson) naps, Anne (Miyagi) reveals her marital worries in the song "Soon."

Core company members not only have a grueling schedule — performing one part at night and rehearsing another in the morning — they also multitask. For example, Bumke publicizes the performances, picks up the French horn for "A Little Night Music" and then directs "Boeing-Boeing," a door-swinging farce set in 1960s Paris that follows the shenanigans of a bachelor with three fiancées, all Boeing flight attendants.

The company's graphic designer, Ariel Sibert, a 2012 graduate who majored in art and archaeology, will play roles in "Gaslight" and "Boeing-Boeing." Rising senior Emma Watt, a comparative literature major who is pursuing a certificate in theater, serves as company manager and will appear in "A Little Night Music," stage manage "Gaslight," and direct and produce the children’s programming. In addition to his duties as artistic director and director of "The American Plan," Rattner will also take the stage in "Boeing-Boeing."

Rattner, Bumke, Sibert and Watt form the company's executive board, in charge of artistic and administrative functions. One of their tasks was to organize rounds of auditions in New York and on Skype, which added Katrina Michaels, a student at the Tisch School of the Arts at New York University, and Andrew Massey, a student at Vassar College, to the company. Other guest actors, who auditioned on campus, hail from Westminster Choir College and Syracuse University.

Despite the hard work, Bumke said the company members enjoy their summer "family." Twenty of them reside together in one section of Cuyler Hall, and cook communally at Wilson College's Dodge-Osborn kitchen. 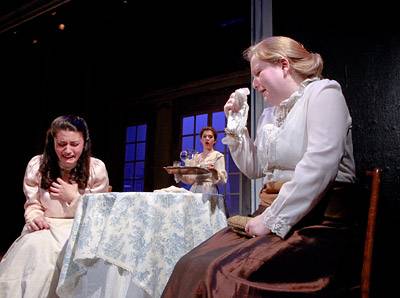 The company also helps launch its members into theater careers. At the end of this season, two members of the Class of 2012 already are looking ahead to new prospects. Cara Tucker, who majored in English and holds a certificate in theater, will serve as assistant director for "A Little Night Music" and will continue to work with Immerwahr as a producing/casting intern at McCarter Theatre this fall. Lighting designer Alexandra Mannix, a classics major with a certificate in theater, will be joining Arena Stage in Washington, D.C., as a lighting fellow.

As part of its 2012 season, Princeton Summer Theater also will present a children's show, "Little Red's Wild Ride," a whimsical adaptation of the classic children's story, written by Shawn Fennell, a company alumnus and a member of the Class of 2010. Performances will take place Thursdays through Saturdays, July 5-7, 12-14 and 26-28, and August 2-4. Tickets are $9; children under 3 are free.

In addition, the company will offer six children's theater workshops — movement and dance; improvisation; masks and characters; playwriting; lights, set, and sound; and scene and story — for children ages 7 to 12. Workshops begin on Friday, July 6, and run weekly from 1:30-4 p.m. The cost is $35 per workshop, or $145 for the full series.

Season subscriptions for the main stage series are $65 and are available for purchase until July 1. Subscriptions are available online, by calling the toll-free subscription number 877-238-5596 or the theater's box office at 609-258-7062, or by emailing princetonsummertheater@gmail.com.

Single tickets are $25 for general admission and $20 for students. Tickets are available by calling the box office Tuesdays through Fridays, 10 a.m. to 6 p.m., and Saturdays and Sundays, 10 a.m. to 1 p.m.; by email; or at the door 45 minutes before the performance.

For more information about the performances, visit the theater's website or call 609-258-7062. 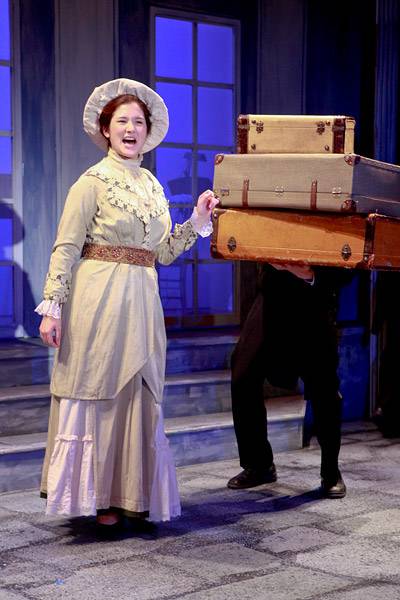 Desirée (Sillers) recounts her hectic touring schedule in the song "The Glamorous Life," while her servant (Eggers) struggles with her luggage. 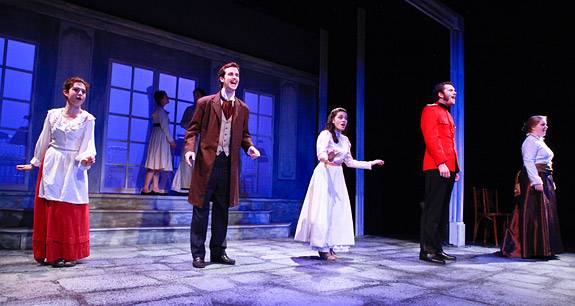 All 15 cast members are featured in the Act I closing number, "A Weekend in the Country." Shown here, from left, Petra (Michaels), Fredrik (Thompson), Anne (Miyagi), Carl-Magnus (Massey) and Charlotte (Brady) plot their way out of their romantic entanglements.