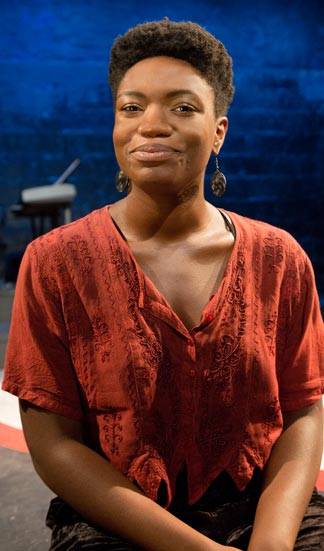 Oge Ude, a member of Princeton's Class of 2016, is the artistic director for the 2016 season of Princeton Summer Theater, a student-run company that presents four plays in eight weeks. This season, which will focus on the theme of "the Other," runs June 16 through Aug. 14, in Hamilton Murray Theater on the Princeton University campus.

Season subscriptions for the main stage series are $79. Single tickets are $29.50 for general admission; $24.50 for matinee performances and students with valid ID. Subscriptions and single tickets are offered online; by calling the theater's box office at 732-997-0205, Tuesdays through Sundays, 11 a.m. to 8 p.m.; or by emailing box@princetonsummertheater.org.

Princeton Summer Theater will take audiences on an exploration of what it means to consider "the Other," presenting four main stage plays and a children's show in eight weeks. The season runs June 16 through Aug. 14 in Hamilton Murray Theater on the Princeton University campus.

"Each show in our season provides a powerful take on noticing and appreciating the differences in us all," said Oge Ude, a member of Princeton's Class of 2016 and the artistic director of the student-run company. "Theater allows us to see what people might not reveal instinctively, giving us a new perspective on what was once familiar. I hope that focusing on the theme of the Other allows audiences to realize the same about themselves, and pushes them to share their own stories of difference with someone new."

Ude said this theme was "inspired by the burgeoning diversity of stories and voices in the contemporary theater world." She chose to look at well-established works by Stephen Sondheim, Yasmina Reza, Tom Stoppard and Sam Shepard, all of whom "tell stories that reveal the multiplicity of the human condition." 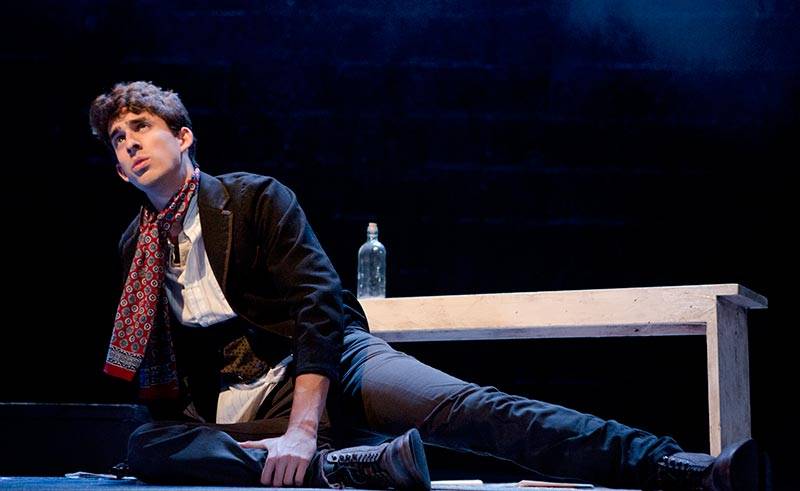 Billy Cohen, a member of Princeton's Class of 2016, portrays John Wilkes Booth and reaches his demise in the musical number "The Ballad of Booth" in the 47th season of the Princeton Summer Theater.

Ude became involved in theater at Princeton her freshman year when she took a beginning acting class with Tracy Bersley, a lecturer in theater and the Lewis Center for the Arts, and was cast in Sarah Ruhl's 2009 play "In the Next Room," a senior thesis production. In addition to acting, Ude has directed and choreographed productions for the Lewis Center for the Arts' programs in dance and theater, as well as the student-led groups Theatre Intime and Princeton University Players. She majored in English and spent a semester abroad at Oxford studying modern British drama, Shakespeare and African American female writers.

Her senior thesis was a dance-theater production titled "there. remaining.," which Ude said "explored W.E.B. Du Bois' theory of double consciousness as a mental and racial phenomenon through the use of movement, text, music and projections."

The 47th season of Princeton Summer Theater (PST) opens with Sondheim's "Assassins" on Thursday, June 16. The multiple Tony Award-winning musical takes a dark and humorous look at America's culture of celebrity and the violent means taken to obtain it. Maeve Brady, a 2015 alumna who has acted in three seasons of Princeton Summer Theater and is pursuing an acting career in New York, returns as a guest artist in this production. 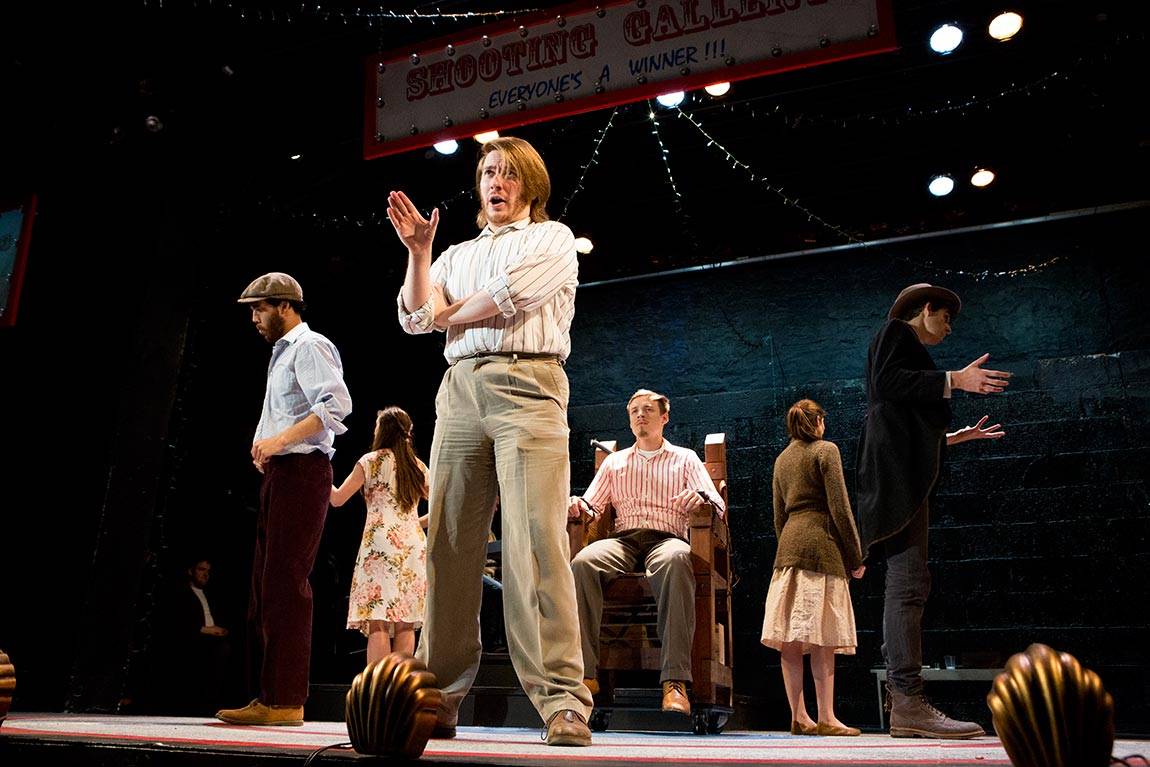 In the musical number "How I Saved Roosevelt," onlookers recall their perspective of the assassination attempt on President Franklin D. Roosevelt.

The season continues with "God of Carnage," June 30-July 10. The production will be directed by Annika Bennett, a 2015 alumna.

"'God of Carnage' fits into the theme of the Other to me in its relationship to genre," Bennett said. "It starts out very much like a play we've all seen a hundred times before, with these two polite, immaculately dressed, affluent couples having a very civil conversation, and then twists and turns in dark and delicious and fascinating ways to become something completely unrecognizable."

"Rosencrantz and Guildenstern Are Dead," July 14-31, takes an absurdist look into Shakespeare's "Hamlet," told through the view of the those once-minor characters. Emma Watt, a 2013 alumna, will direct.

"Though they participate in the story of 'Hamlet,' Rosencrantz and Guildenstern don't fully understand or experience it," Watt said. "The comedy of the piece — and it's full of Stoppardian wit at its best — comes from their struggle to comprehend the patterns at play all around them, and to truly understand their role in the world that has swept them up. I want the audience to laugh all evening, but go home with a few poignant phrases ringing in their ears, wondering what story they've been unknowingly swept up in."

Ude will direct "Fool for Love," Aug. 4-14. She described the show as "an oddly funny and dark play about two battling lovers who have more in common than we first are led to believe. Through their back-and-forth bickering, they reveal secrets about each other and their haunting shared past. It's a play that deeply explores our relationship to our parents and how it affects the relationships we pursue as adults," she said.

"I'm excited to get into the pure grit of this show. It will be a huge acting challenge as it is a quick and fierce production," she said. Ude said a highlight of the many theater courses she took at Princeton was the directing workshop taught by the late professor Tim Vasen. She said the course "helped me discover how a director may best facilitate the storytelling process." 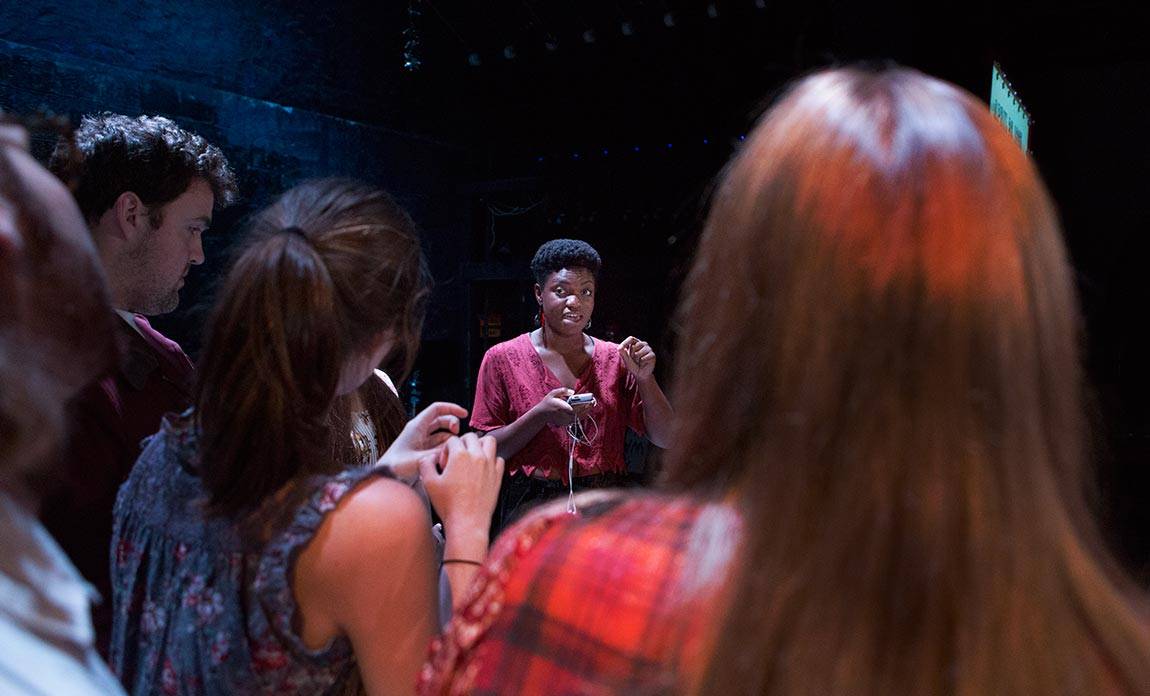 Ude meets with cast members of "Assassins" before a rehearsal. The Stephen Sondheim musical, which takes a dark and humorous look at America's culture of celebrity, opens the season and runs Thursday, June 16, through Sunday, June 26. It is directed by Tatiana Pandiani.

Many PST company members go on to pursue careers in theater and drama. The company has been performing since 1968. Ude, Bennett and Watt all are using their experience at Princeton and PST to further their theatrical careers.

Ude has been awarded a Sachs Global Fellowship from Princeton, which will allow her to pursue an independent project studying the theater and dance practices of indigenous communities in and near Melbourne, Australia. She will begin the project by attending a dance program in Berlin in the fall before venturing to Melbourne in January 2017. 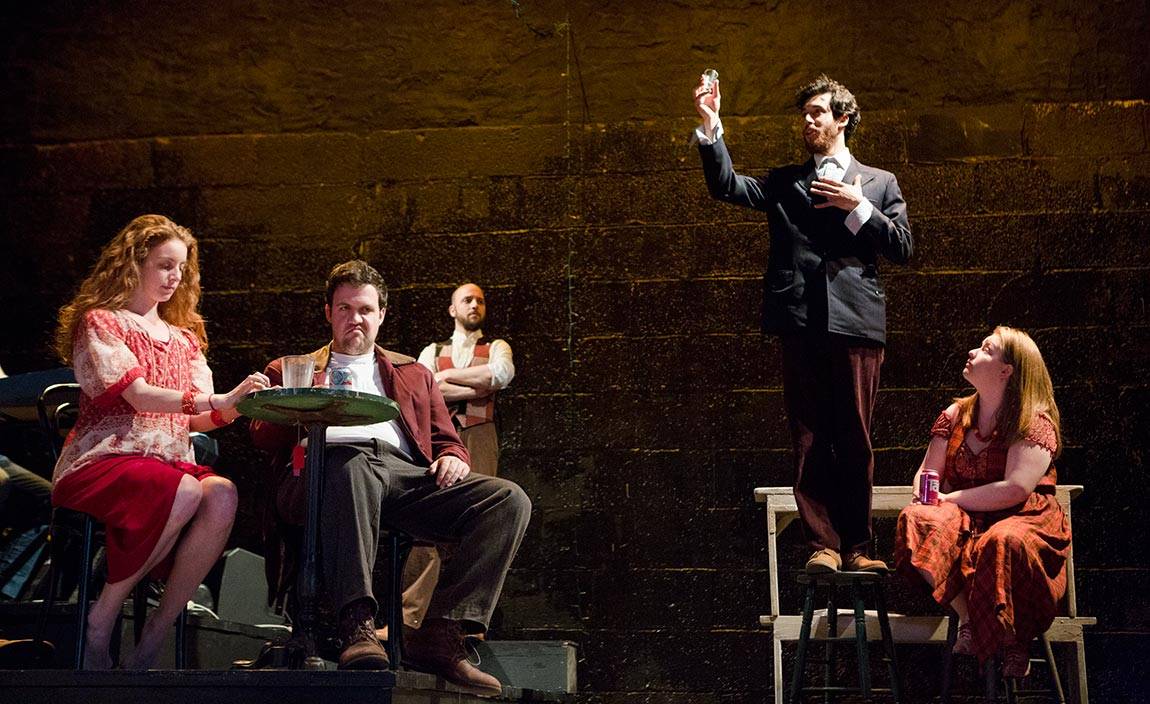 The assassin Charles Guiteau, played by guest artist Esteban Godoy, makes a toast in a crowded bar in a scene from "Assassins."

At Princeton, Bennett directed "Circle Mirror Transformation" and "The Language Archive" for Theatre Intime. "My favorite thing about directing is bringing a group of smart people together and creating an environment where everyone can contribute their unique voice to the storytelling process — it's what makes theater so specific and so alive," she said. As a PST company member in 2013, Bennett wrote the children's show "How Thumbelina Found Her Wings," ran children's workshops, and served as company manager and costumer. 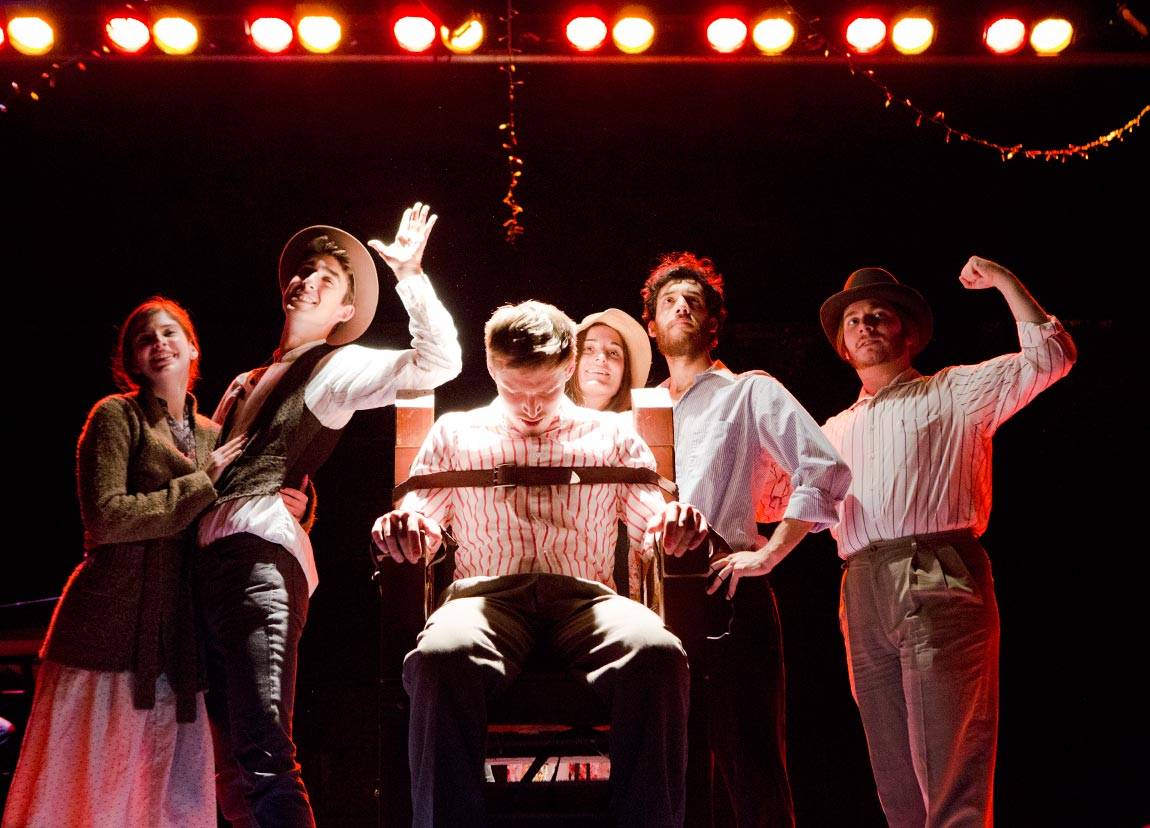 Assassin Giuseppe Zangara, played by guest artist Aksel Tang, is sentenced to death in the musical number "How I Saved Roosevelt."

Watt served as PST's artistic director in 2013 and served a triple role in the company's 2012 season — company manager, actor and director of children's programming. Since graduating, she has worked with Seattle Repertory Theatre, Seattle Opera and several smaller companies in Boston and Seattle as a producer, director and teaching artist.

Most recently, she has been working at Oberon, American Repertory Theater's second stage, and will begin graduate studies for theater education at Harvard University in the fall.

"As a director, you create the creative environment and set the goals for a community of artists, but you can't ultimately control the performance," said Watt, who directed several productions at Theatre Intime while at Princeton. "My favorite moments are when an actor or designer makes a beautiful discovery that I never could have found on my own."

In addition to the alumni featured as guest performers, PST's acting company this summer includes three Princeton alumni: Billy Cohen and Ryan Gedrich, both members of the Class of 2016, and Olivia Nice, a 2014 alumna. Nice has been pursuing acting in New York since graduation, and Cohen and Gedrich plan to do the same.

Princeton Summer Theater will present a children's show, "The Owl and the Pussycat," adapted by Bennett from the Edward Lear poem, and directed by Ude. "It's a celebration of nonsense and the strange and wonderful logic of nonsense worlds," said Bennett. "My hope is that it'll be really fun for kids to figure out the rules of the world alongside Owl and Pussycat," she said.

Performances take place at 11 a.m. Thursdays through Saturdays, July 7-30. Tickets are $12; children under 3 are free.