Emma Watt, a 2013 Princeton alumna, is the artistic director of Princeton Summer Theater's 2013 season. Watt, a comparative literature major who also earned a certificate in theater, is using the breadth of theater experience she gained as an undergraduate to oversee the student-run company's four productions in eight weeks. The 45th season runs June 20 through Aug. 11.

Each summer, Princeton Summer Theater takes on the Herculean task of presenting four plays in eight weeks. Emma Watt, a 2013 Princeton alumna, is the artistic director of the student-run company, which is made up of Princeton students, alumni, faculty, community members and guest artists. In selecting the plays for the 2013 season, Watt said "they were bound by a common theme of making the ordinary extraordinary."

Princeton Summer Theater opens its 45th season on June 20 with the musical "She Loves Me," directed by Sarah-Ashley Bischoff, a 2009 Princeton graduate. The love story takes place in a parfumerie in 1930s Budapest, Hungary, and is based on a play by Miklos Lazlo.

"I am passionate about theater that celebrates the possibility of stories in the most mundane situations," Watt said. 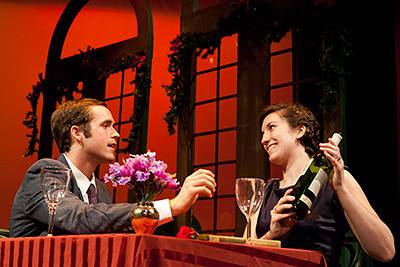 The season opens with the musical "She Loves Me," a love story set in a 1930s Budapest parfumerie about two quarrelsome co-workers, Georg and Amalia, who fail to realize that the anonymous lonely hearts pen pals they write to at night are actually each other. Georg (Woody Buck, guest artist) and Amalia (2013 Princeton graduate Holly Linneman) run into each other at a restaurant, each still unaware of the other's real identity.

In "She Loves Me," a shop girl and her male co-worker argue relentlessly, neither realizing they are receiving romantic letters from the other as part of an anonymous pen pal service. Filmgoers may recognize the story line from the 1940 movie "The Shop Around the Corner" with James Stewart and Margaret Sullavan or the 1998 "You've Got Mail" starring Tom Hanks and Meg Ryan.

"She Loves Me" runs through June 30. The season continues with Beth Henley's Mississippi family tragicomedy, "Crimes of the Heart," July 4-14. It will be directed by Daniel Rattner, a 2013 alumnus who served as the artistic director for the company last year. Patrick Barlow's Hitchcock spoof "The 39 Steps" runs July 18-28, directed by Jeff Kuperman, a 2012 graduate. Watt will direct the closing production, Donald Margulies' Tony-nominated Iraq war story, "Time Stands Still," Aug. 1-11. Each production runs over two weekends, with performances at 8 p.m. Thursdays through Saturdays, and 2 p.m. matinee performances on Saturdays and Sundays. There will be talk-backs with audience following each Friday performance (with the exception of "She Loves Me.")

"I hope our audiences leave this season a little more ready to see drama and adventure in the ordinary parts of their lives and to find beauty and meaning in the stories of those around them," said Watt, who served a triple role in the company's 2012 season: company manager, actor and director of children's programming. 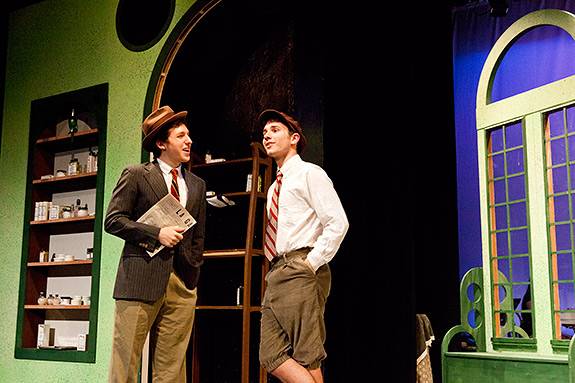 Cultivating a love of theater at Princeton

Watt, who is from Durham, N.H., has been involved in theater since age 9, and she credits her four years at Princeton for deepening her love of theater. She served on the board of Princeton's Theatre Intime for four years and performed with the Princeton Triangle Club, Princeton Shakespeare Company and Princeton University Players.

Watt's passion for theater also played out in her academic studies. The comparative literature major earned a certificate in theater and served as the assistant director for the Lewis Center for the Arts' production of "Pippin" in 2012. Among her many theater classes at Princeton, a turning point for her was one with Tracy Bersley, lecturer in theater and the Lewis Center, in which she directed Craig Wright's "The Pavilion."

"I was able to try the exercises that resonated with me in class with my small and devoted cast," Watt said. "I gained a sense of rehearsal as a laboratory, and I started to develop the confidence to shape the storytelling of a piece rather than just put the text onstage. That was the production that really first made me feel like an artist," she said. 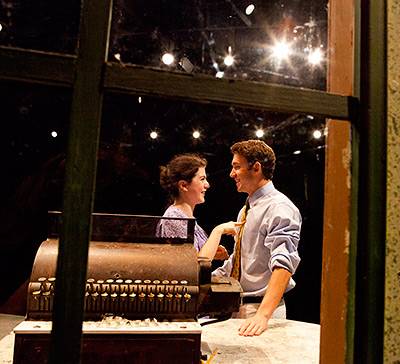 Watts also studied Spanish and Swahili, which opened doors to new opportunities. Her junior independent work and senior thesis focused on the relationship between dramatic literature and politics. She spent the summer after her freshman year working for the Asociación Pro Arte y Cultura in Santa Cruz, an organization dedicated to preserving the cultural heritage of southeastern Bolivia. The summer after sophomore year, Watt traveled to Kenya with her Swahili teacher, Mahiri Mwita, a lecturer in the Princeton Institute for International and Regional Studies, to observe a magnet theater troupe that performs street theater focused on HIV/AIDS education.

Watt is bringing all this experience to her role as Princeton Summer Theater's artistic director. "As artistic director, the buck stops with me," she said. "The experience of finding out that almost any problem can be solved will be essential as we try to do the impossible: as many performances in eight weeks as Theatre Intime does in a year!"

In the fall, Watt will move to Seattle to work as the artistic-casting intern at the Seattle Repertory Theatre.

"To me, theater matters because it is about coming together, in person, to work together, tell stories and listen to each other," Watt said. "Even in its silliest form, live performance is the ultimate human art — it is so deeply dependent on the way we interact as a community." 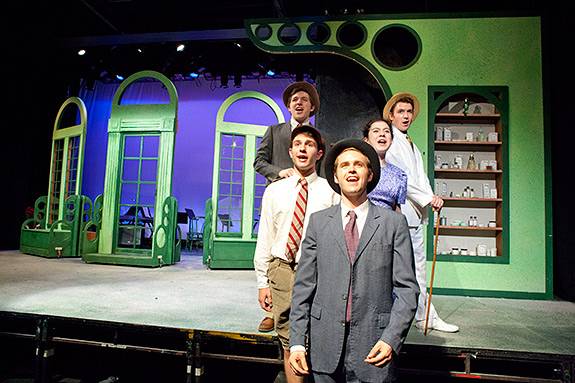 A steppingstone to professional theater

Performing since 1968, Princeton Summer Theater has been a training ground for students interested in pursuing careers in theater and entertainment. Its alumni include Tony and Emmy Award-winning actress Bebe Neuwirth; Winnie Holzman, who wrote the book for "Wicked"; and Lileana Blain-Cruz, who served as assistant director for the Tony Award-winning "Joe Turner’s Come and Gone" in 2009 and will direct "Much Ado About Nothing" at Princeton this fall. Several board members are industry professionals, including William Lockwood, special programming director of McCarter Theatre Center and Tony Award-winning producer Geoff Rich ("Avenue Q") . Professionals often come to work with the company; for example, Adam Immerwahr, McCarter's associate producer, directed Princeton Summer Theater's "A Little Night Music" in 2012.

Princeton Summer Theater also will present a children's show, "How Thumbelina Found Her Wings," written by rising junior Annika Bennett, who also serves as company manager and costumer, and directed by classmate Maeli Goren, Princeton Summer Theater's communications director. Performances will take place at 11 a.m. Thursdays through Saturdays, July 4-6, 11-13, 25-27, and Aug. 1-3 and 8-10. Tickets are $9; children under 3 are free. 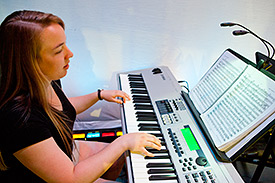 Music director and rising junior Emily Whitaker leads the orchestra, which is set on stage and visible through the scenery.

The company will offer six children's theater workshops — improvisation; foundations of playwriting; creating a character; puppets, masks and movement; scene and story; and design elements of the theater — for ages 7 to 12. Workshops begin on Friday, July 5, and run weekly through Aug. 9 from 1:30-4 p.m. The cost is $35 per workshop, or $145 for the series.

Season subscriptions for the main stage series are $65 and offered until July 1 online at www.SmartTix.com, by calling 646-873-8214 or the theater's box office at 609-258-7062, or by emailing princetonsummertheater@gmail.com.

Single tickets are $25 for general admission; $20 for students. Tickets are available by calling the box office Tuesdays through Fridays, 10 a.m. to 6 p.m., and Saturdays and Sundays, 10 a.m. to 1 p.m.; by email; or at the door 45 minutes before the performance. For more information about the performances, visit the theater's website or call 609-258-7062. 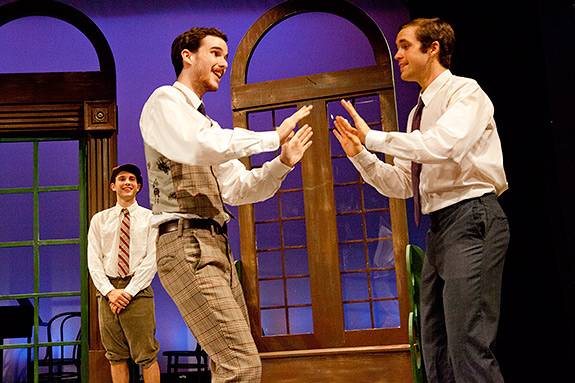 Shop owner Mr. Maraczek (rising senior Evan Thompson, at left) reminisces about his younger days and convinces a reluctant Georg (Buck) to dance, to the delight of onlooker Arpad (Wilson). 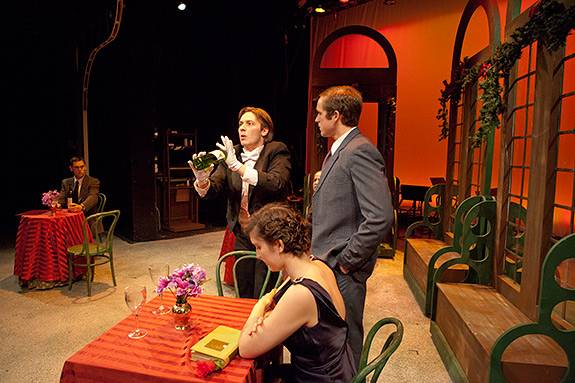