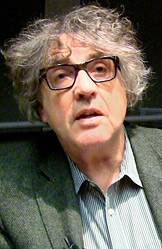 "How to Write a Song," a Princeton Atelier course co-taught by Paul Muldoon, the Howard G.B. Clark '21 University Professor in the Humanities, engaged students by having them perform original songs inspired by a different emotion. The course met weekly in a workshop setting, with students receiving feedback from their peers and instructors.

"How to Write a Song," a Princeton Atelier course co-taught by Paul Muldoon, the Howard G.B. Clark '21 University Professor in the Humanities, engaged students by having them perform original songs inspired by a different emotion. The course met weekly in a workshop setting, with students receiving feedback from their peers and instructors.

This spring, 23 Princeton students mined their own experiences with joy, fear, loneliness and a host of other emotions to write original songs. Using the workshopping style of the performing arts, they met in the Whitman College Class of 1970 Theater each week for the course "How to Write a Song."

In small groups, toting a variety of instruments — guitar, ukulele, mandolin, fiddle, harmonica and even an ocarina — they handed out lyrics to their fellow students, then took the stage to perform, followed by feedback from their peers and instructors.

"How to Write a Song" was co-taught by Pulitzer Prize-winning poet Paul Muldoon, the Howard G.B. Clark '21 University Professor in the Humanities and acting director of the Princeton Atelier, and singer-songwriter and author John Wesley Harding.

Play the "How to Write a Song" video.

This video captures how the students immersed themselves in the world of songwriting as well as some of their April 27 performance at Small World Coffee on Witherspoon Street in Princeton.

"How to Write a Song" was a course offering of the Princeton Atelier, an interdisciplinary program that brings to campus renowned artists to collaborate with students to create new work, sometimes in conjunction with faculty members. Each course culminates in a public presentation such as a performance, production or exhibition.

"The central idea of the Atelier is that it's based on a collaboration," Muldoon said. "I was thrilled to think of the possibility of working with John Wesley Harding, the great English songwriter, who also writes novels under his real name, Wes Stace."

Muldoon, who is a professor of creative writing in the Lewis Center for the Arts, is no stranger to the music scene. His recently published "The Word on the Street" is a book of rock lyrics from the new album of the same name recorded by his own Princeton-based band, the Wayside Shrines.

Muldoon and Harding are also collaborating on a recording project, work that has helped their teaching. "Paul and I have been writing songs together, and his lyrical expertise and my knowledge of throwing songs together, that's what we were hoping to pass on to the students," said Harding, who has recorded 17 albums, most recently "The Sound of His Own Voice."

In the Atelier, the students wrote a new song each week, working with a different small group. "We would take a particular theme that's based on some kind of emotional charge — it might be jealousy, it might be anger, it might be joy, it might be defiance, whatever it might be, revenge — and just allow the students to go to town on that, and it's worked out fabulously well," Muldoon said. He estimated that the class wrote 60 to 70 songs over the semester.

For an assignment on tapping into loneliness, senior Maia ten Brink, a psychology major who is earning a certificate in creative writing, said she was inspired to write a song about the moon being in love with the Earth. "The Earth just kind of ignores it, and the moon just keeps going around and around, but the Earth is in love with the sun," she said.

Muldoon said an important aspect of the course was teaching the students how to critique each other's work. "We educated them about how to talk about songs," he said. "We created a very caring climate and told them, 'This is a place where you can be creative.' Wes and I could go away and the class could continue," he said.

Senior Joseph Edelmann, an economics major, said the feedback the students gave one another was an essential part of the experience. "People got really excited about these songs," he said. "Everybody had their own thing that they found special about each song, and they really wanted to talk about it. The discussion always just flew naturally from people's reactions to the song," he said.

Another senior, Emma Zorensky, is a concentrator in molecular biology and is pursing a certificate in dance. She had no previous experience with songwriting and was intrigued by the opportunity to learn from Muldoon and Harding.

"We were working with two instructors who are very well-known and whose reputations precede them, and they were so fantastic to work with," she said. "I was definitely intimidated, especially not being a trained musician or poet, but the feedback they gave us was fantastic."

Zorensky said she was excited about the opportunity to perform in front of a live audience at Small World Coffee and to "show what we've been working on in this class to the community," she said.

On the night of the concert, the café was packed. Harding introduced each group of students with the confident banter of a seasoned professional. As the duos and trios stepped up to the microphone, lyrical songs of broken hearts, lovers' dreams and even college hijinks spilled over the audience, accompanied by coffeehouse chatter, the clink of cups and the occasional burst of steam from the espresso machine.

Edelmann said that even with previous performance experience with his own band, Burne Holiday — which he started with three fellow Princeton students, including Javier Masis, who also participated in the songwriting atelier — the Small World concert was a one-of-a-kind of experience.

"Being presented as a songwriter to the Princeton community on the shoulders of two poetic giants was nothing short of awesome," Edelmann said.