Internationally renowned singer-songwriter Paul Simon visited Princeton University on Tuesday, March 3, talking about his career in a discussion facilitated by Paul Muldoon, the Howard G. B. Clark '21 University Professor in the Humanities and a professor of creative writing in the Lewis Center for the Arts. The Grammy Award-winning artist also offered an impromptu performance to a capacity audience of over 800, made up of mostly students joined by faculty and staff at Richardson Auditorium. The event was presented by the Lewis Center's Performance Central.

In a relaxed conversation with Muldoon, Simon discussed a range of topics including his most recent work, his early influences, the state of the music industry and the challenges artists face in today's world. He also took questions from students in the audience.

When asked about his earliest musical influences, Simon noted the doo-wop groups of the 1950s, Elvis Presley and particularly the Everly Brothers, saying he was in awe of Phil and Don Everly as a teen, calling them the "best-sounding duo" he had ever heard. He recalled a 2003 concert in which he and Art Garfunkel, reunited for a world tour, invited the Everly Brothers to come out of retirement to be guest performers.

Who does he listen to now? Clap! Clap! — the project of Italian music producer C. Crisci, focused on research and sampling of tribes, bands and singers originating from Africa; Charles Ives; Lou Harrison; a range of classical music; Philip Glass; Frank Sinatra; and music from the 1950s, especially the period 1954-56. "But I mostly listen to me," he said, noting that he is constantly working on new material. 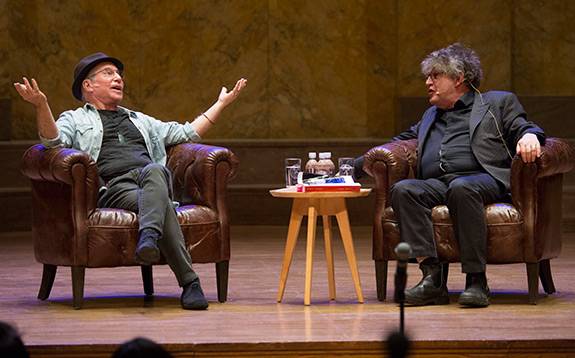 Singer-songwriter Paul Simon (left), whose career spans five decades, appeared before an audience of over 800 Princeton University students, faculty and staff on March 3 in Richardson Auditorium. Above: Simon and Paul Muldoon, the Howard G. B. Clark '21 University Professor in the Humanities and a professor of creative writing in the Lewis Center for the Arts, share a laugh during a conversation that spanned a range of topics from the music industry to Simon's recent musical endeavors. (Photos by Denise Applewhite, Office of Communications)

Simon described his interest in the work of 20th-century composer Harry Partch, who composed microtonally, closely looking at the range within each note. Partch contended the western scale of 12 notes in an octave was actually 36 notes and did not fully represent the range of notes. Partch invented instruments to play microtonal intervals. Simon had an opportunity to play and record with these instruments for the new songs he is working on. He played a recording of one of them, "The Insomniac’s Lullaby," for the audience.

When asked about the prospects for a young songwriter starting out today, Simon noted the challenges of the economics of the music business. "We are living in an anti-art age," he said. "The world is now a brutal place and obsessed with speed and wealth."

According to Simon, the biggest problem with the music industry today is that it is about the packaging of the artist controlled by a small number of large corporations. There are a few huge stars but many talented, struggling artists. However, Simon believes this will change, predicting the industry will see a shift similar to the one that occurred in the 1960s, ushered in by the young people studying music today. His best advice to budding songwriters: work hard; there are no shortcuts.

Simon also expressed concern about the growing financial resources spent on presidential campaigns in the United States, heavily influenced by a very small group of extremely wealthy individuals. He observed that artists have valuable perspectives on life, but politicians don't ask artists for their opinions on important issues. He recalled that when he was working on the album "Graceland" in South Africa, the artists and musicians with whom he collaborated had the best understanding of South African politics. When one student asked what it was like working on "Graceland" with Ladysmith Black Mambazo, Simon said, "It was one of the great learning experiences of my life."

Sophomore Aaron Schwartz of Melville, New York, asked Simon, who grew up in Flushing, Queens, how his identity as a native New Yorker has shaped his songwriting. "Everybody's hometown has a big effect on their writing — the first things that you see and hear and love," Simon said, adding that when he creates a character in a song who is not from New York, he finds it more challenging to sing.

Schwartz, who is majoring in civil and environmental engineering and is also pursuing a certificate in urban studies, said he grew up on Simon's music. "My parents always played Paul Simon and Simon and Garfunkel CDs in the car," said Schwartz, who plays the saxophone in the Princeton University Wind Ensemble. "When I found out he was coming here, I called them up and said, 'Guess who I'm seeing?'" 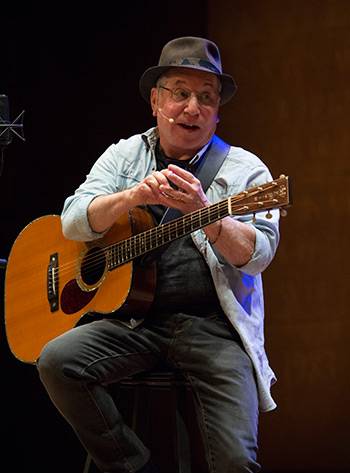 After taking questions from students, Simon surprised the audience of with a performance of "The Sound of Silence," the 1964 hit song from Simon and Garfunkel's first album.

Sophomore Keith Gladstone of Bridgewater, New Jersey, who is concentrating in operations research and financial engineering, called the event "the opportunity of a lifetime" and said a highlight was Simon's discussion of new musical technologies.

"He was talking about the variation within a single note, that as computers get better and software gets better, you can find optimal tones, the optimal ways to produce music," Gladstone said. "But as a student who's taking a lot of technology-oriented classes, what I gather from this whole experience is that even the most intelligently thought out algorithm or program or advancement in machine technology can never really replicate the human element in any way."

Gladstone also attended because of a personal connection to Simon's music. "I just learned that Paul Simon went to high school with my grandmother — so I'm going to call her and tell her how great the experience was," he said.

After another student asked if the microphone and stool on the stage meant Simon might perform a song, the songwriter responded to encouraging applause and was handed a guitar by Muldoon. Simon performed a rendition of "The Sound of Silence," the 1964 hit song from Simon and Garfunkel's first album. Earlier in the conversation, he told the audience that he chose this song when asked to perform at an event marking the 10th anniversary of 9/11, rather than the organizers' initial request, "Bridge Over Troubled Water."

Princeton's oldest a cappella group, the Nassoons, opened the event with a performance of a medley of songs from "Graceland."

Prior to the public talk, Simon visited a creative writing and music course taught by Muldoon, "How to Write a Song." In the course, students compose music and write lyrics each week that respond to themes such as contempt, gratitude, revenge, desire, disgust, joyousness, remorse, loneliness, despair and defiance. The students will perform songs from the course in a public concert at the end of the semester.

Simon is the most recent in a series of guest artists who have joined Muldoon and the 26 students in the course throughout the semester. Simon spent three hours with the students, listening to and critiquing the songs created that week.

"It was inspiring for the obvious reasons," said senior Pam Soffer, a psychology major. "But I appreciated that he gave us very specific comments and suggested places to tweak and to focus."

"A good question he told us to ask ourselves was whether we could see ourselves continuing to work on the song for six months, whether we were that committed to it," added sophomore Charlie Baker, a German major.

During his distinguished career, Simon has been the recipient of many honors including 12 Grammy Awards, three of which — "Bridge Over Troubled Water," "Still Crazy After All These Years and Graceland — were Album of the Year. In 2003, he was given a Grammy Lifetime Achievement Award for his work as half of the duo Simon and Garfunkel. He is a member of the Songwriters Hall of Fame, a recipient of the Hall of Fame's Johnny Mercer Award and was inducted into the Rock 'n' Roll Hall of Fame as a member of Simon and Garfunkel and as a solo artist. His song "Mrs. Robinson" from the motion picture "The Graduate" was named in the top 10 of the American Film Institute's "100 Years...100 Songs."